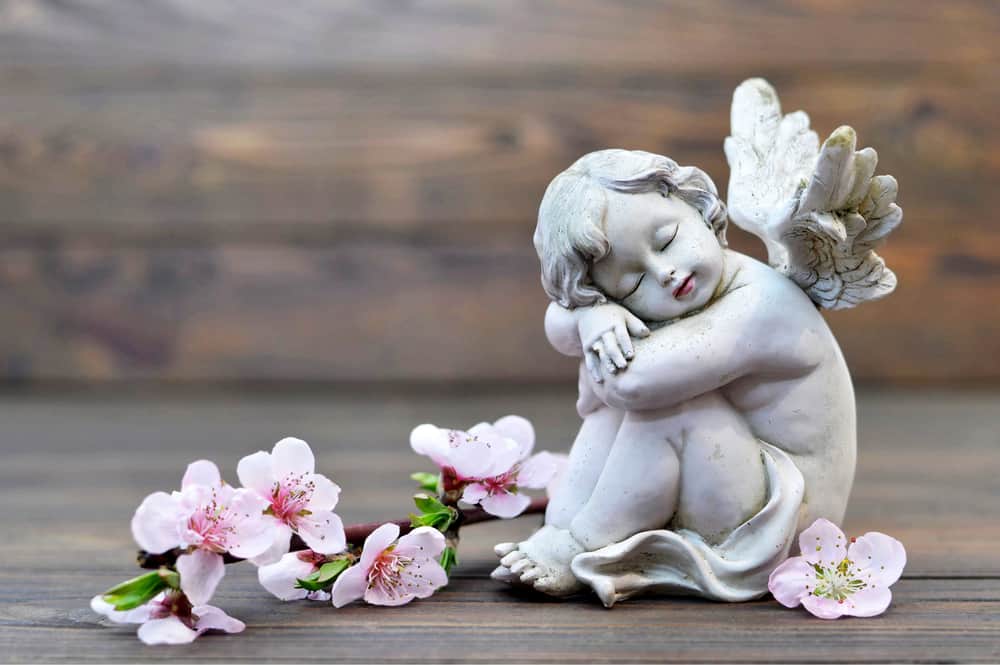 How many of us have been gifted with an angel figurine at some point in our lives? At the time, we might not have appreciated the well-meant gift, but there are many angel figurines that are not just great gift ideas, but also popular collectables.

In this article, we have included information about different collections as well as listed fifteen valuable angel figurines.

There are many different collectible figurines. The angels can be made of wood, resin, porcelain, glass, and even crystal. Below, you will find information about some of the most collectible angel figurine makers and artists.

Lladró is a Spanish brand that is a world leader in porcelain art creations. The brand originates from the 1950s when three brothers, Juan, José and Vicente began to make their first ceramic figurines, plates and cases.

They took inspiration from European manufacturers such as Meissen and Capodimonte. Their designs proved to be popular and by the end of the decade, the brothers opened their first store in Valencia, Spain.

The factory of Meissen was established in 1710 and their wares and sculptures, which are among the finest made in the West, are sought after by collectors. Established by Augustus Strong, the Meissen factory hired several craftsmen and artists to create a variety of products.

Augustus would give products from his factory as diplomatic gifts and soon porcelain became a symbol of his wealth. The idea for small porcelain figurines came from sugar. In the 18th century, sugar would be molded into figures such as gardens, temples and carriages and Meissen began to produce similar figurines from porcelain.

Jay Strongwater is an American designer who began his career while studying at the Rhode Island School of Design. He made a necklace for his mother and when everyone loved it, he took some samples of his jewelry to New York department stores and soon his work was seen on magazine covers, jewelry stores and on the fashion runways.

He branched into home decorations when he created a jewel-encrusted picture frame in 1995 and has since created a range of items, including angel figurines.

Thomas Blackshear is an African American artist whose creations include ornaments, figures and plates. He introduced his Ebony Visions angels in 1995. These angels are a blend of Art nouveau and African culture and express emotions such as hope, love, and faith.

James Christensen was an American artist who took inspiration from religion, myths, fables, and tales of imagination. He grew up in Culver City, California and studied at Santa Monica College. Later, he got an MFA (Master of Fine Arts) from Brigham Young University.

He has won a lot of praise for his art, including being one of the Top 100 Artists in Utah. Despite his success with fine art, sculpture and books, James continued to teach art at Brigham Young University for over twenty years.

The angel figurines by Swarovski are made from crystal and how they are created is a closely guarded secret. The company was founded in 1895 in Wattens, Austria by Daniel Swarovski whose experiments with glass cutting led to his invention of a machine that could mechanically cut and polish glass.

Each Swarovski figure is made from five to fifty separate pieces of glass, which are bonded together through a process of heating and cooling. After the final cooling, the pieces are tested for clarity and only the perfect pieces are used to make the figurines.

The first Goebel figurines were produced in 1935 by Franz Goebel. He based the figurines on drawings by Sister Maria Innocentia Hummel who was a German artist and a nun. The figurines have been in continuous production since then, except for short breaks during the Second World War and in the early 2000s.

Before becoming a nun, Sister Maria, then known as Berta, studied Applied Arts in Munich. But it wasn’t until she had joined the convent that she started drawing sweet children doing daily tasks – drawings that inspired the Goebel figurine collection.

The origins of these Scheibe-Alsbach figurines date back to 1845 when Ludwig Oels founded a small business decorating pipe bowls and stems. In 1847, under different ownership, the company extended production to include walking stick handles and dolls’ heads.

In 1894, the company started to make figurative sculptures in the style of Meissen, which included historical figures and groups. The company survived, despite changing hands several times, until 1990 when it was taken over by the Seltmann group. They were not interested in keeping the factory going, so the employees were let go and the factory gutted.

Here, we have focused on the collections that have angels included on our fifteen valuable angel figurines list. However, there are many more makers of angel figurines. To learn more about them, check out Love to Know’s list of collectible brands and types.

There are some angel figurines that are worth thousands of dollars. They are usually rare antique figurines and many of them are by old figurine makers such as Meissen or Lladró. However, angels from more recent designers such as Jay Strongwater are also worth a significant amount of money.

We have divided the selection below into three categories. In the first category are some examples of angel figurines which are valued in thousands. The second category includes figurines in the $500-$2,000 range.

The final category comprises examples of popular collectable angels which are currently valued between $50-$500 dollars, but may have future potential. At the time of writing, all figurines listed are on sale on eBay. 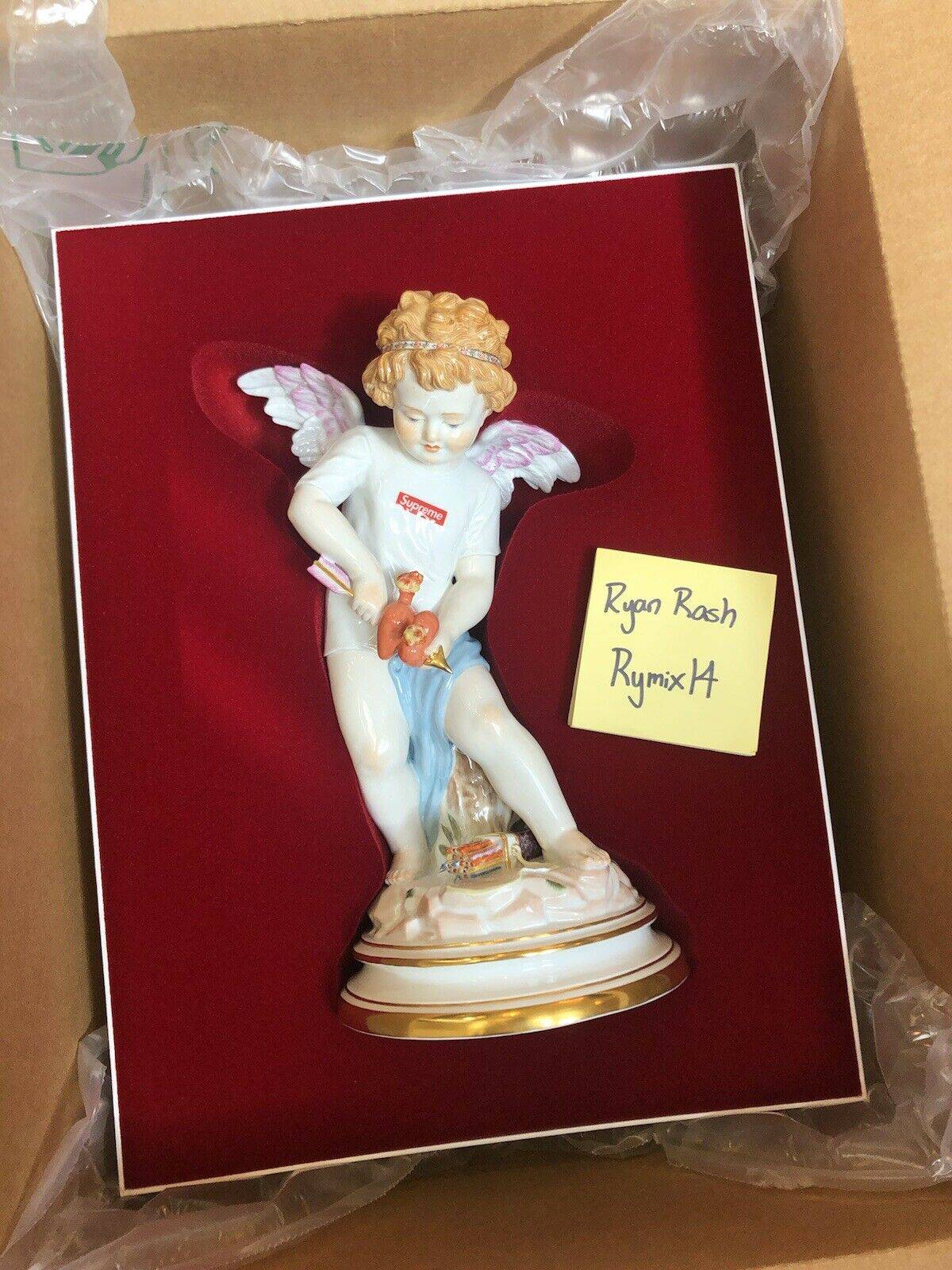 This figurine is still in an unopened box. It is by Meissen who is the oldest European porcelain manufacturer dating back to 1710.

This figurine is a fantastic example of the skills of Lladró artists. Made of porcelain, it has a matte finish and has been handcrafted. 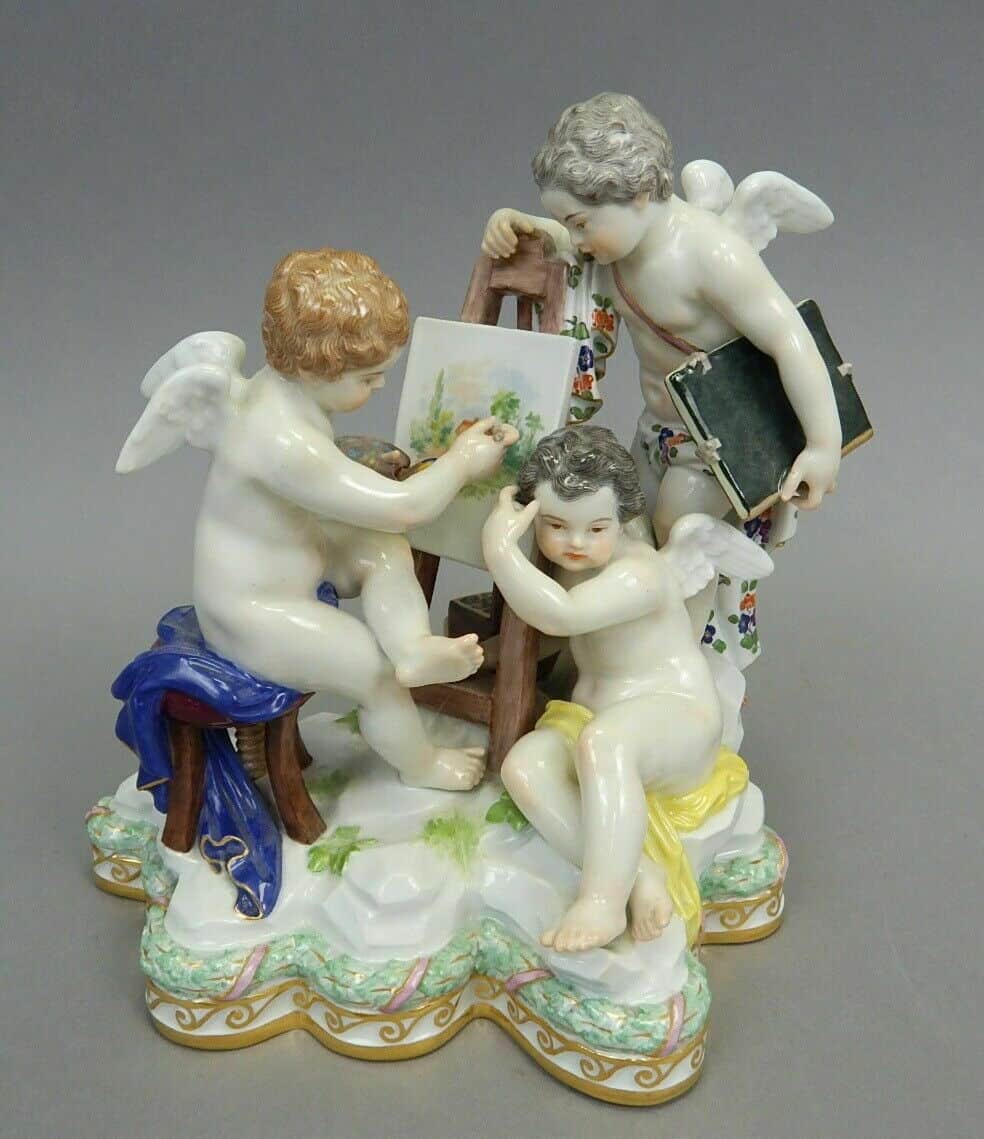 This beautifully painted figurine shows three angels. One of them is painting a scenic picture. The details in this figurine are astonishing. 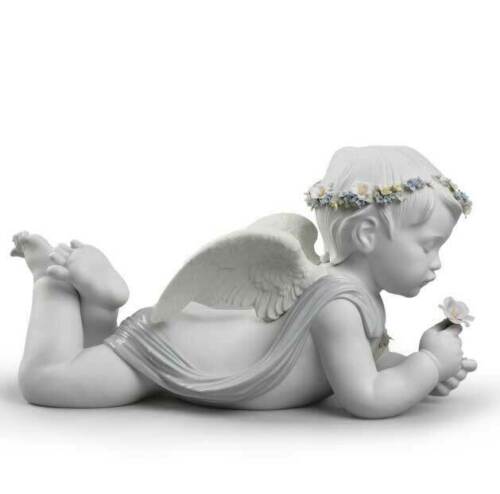 This figurine is inspired by a painting by Raphael from 1513. The face of the angel is extremely lifelike and detailed, as are the flowers. 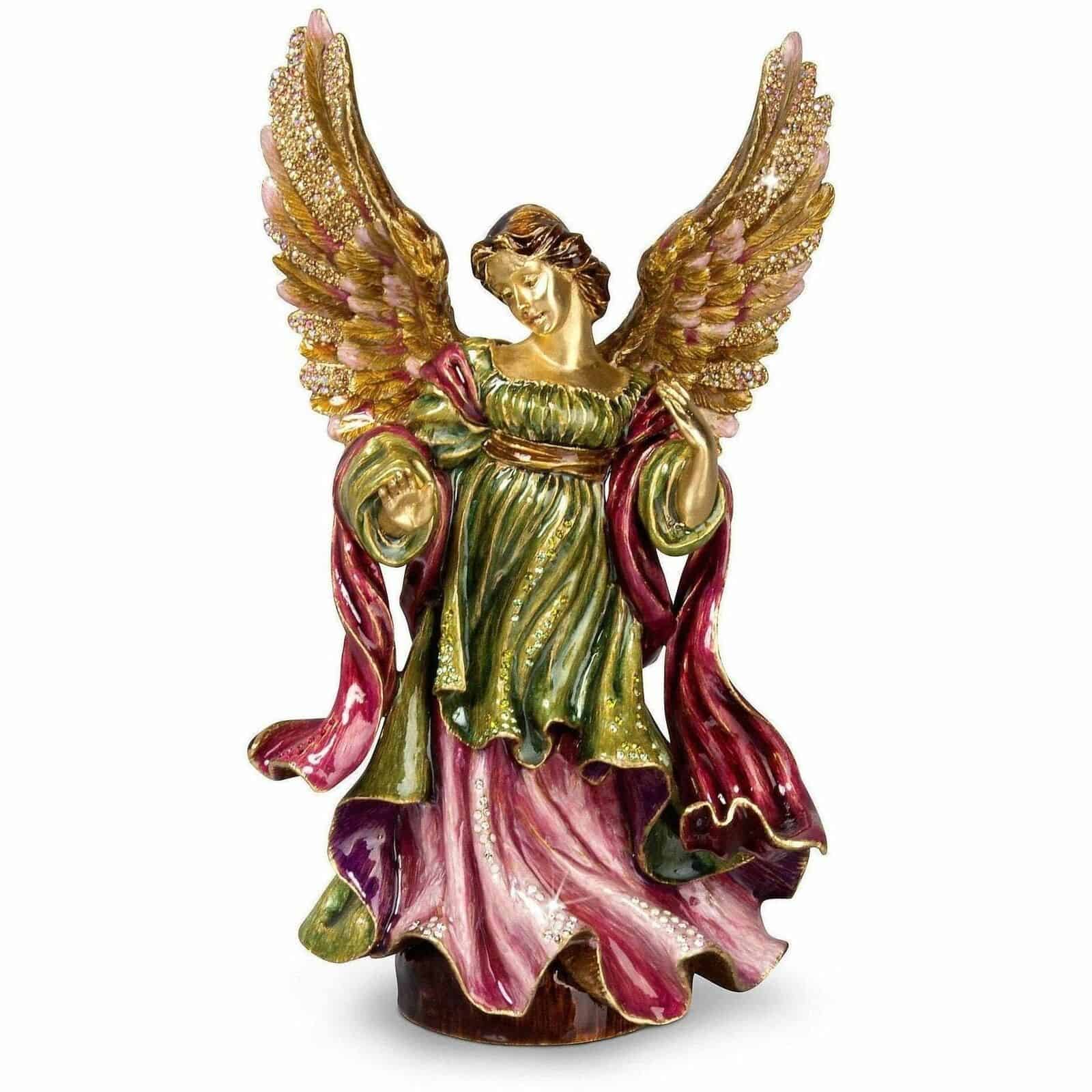 This is a beautifully detailed angel with flowing robes and large decorated wings. 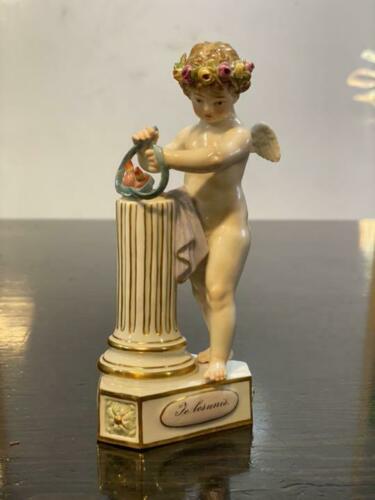 This is another Meissen angel. It is incredibly detailed including the expression on the angel’s face.

A Christmas special, this angel was originally used as a tree topper.

This figurine by Lladró artists features a cherub pushing a wheelbarrow full of flowers. The detail of the flowers is incredible and they are beautifully painted to stand out. 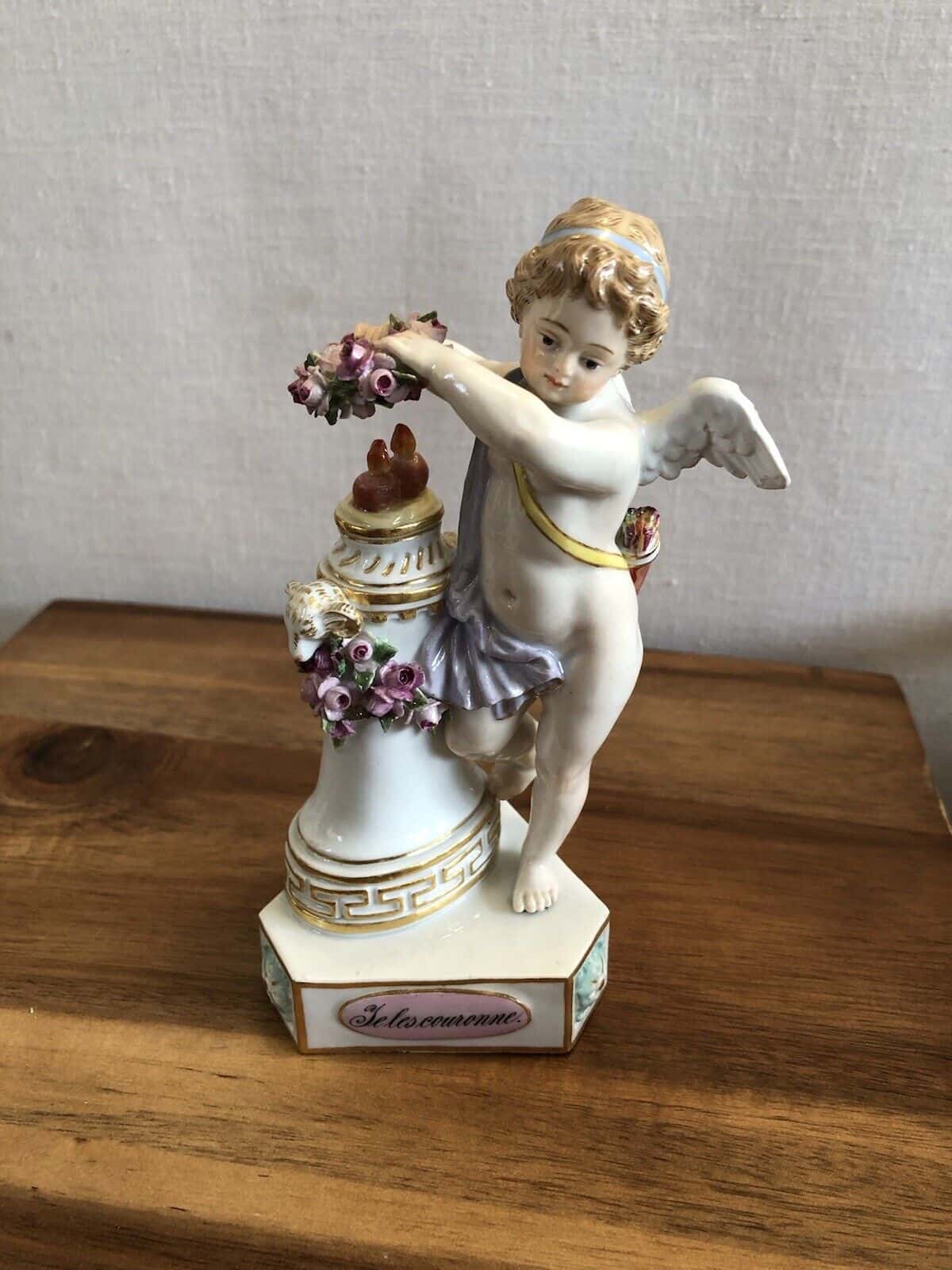 This figurine is part of the “motto children” collectables and has a cherub at a water fountain. It has the usual Meissen attention to detail. 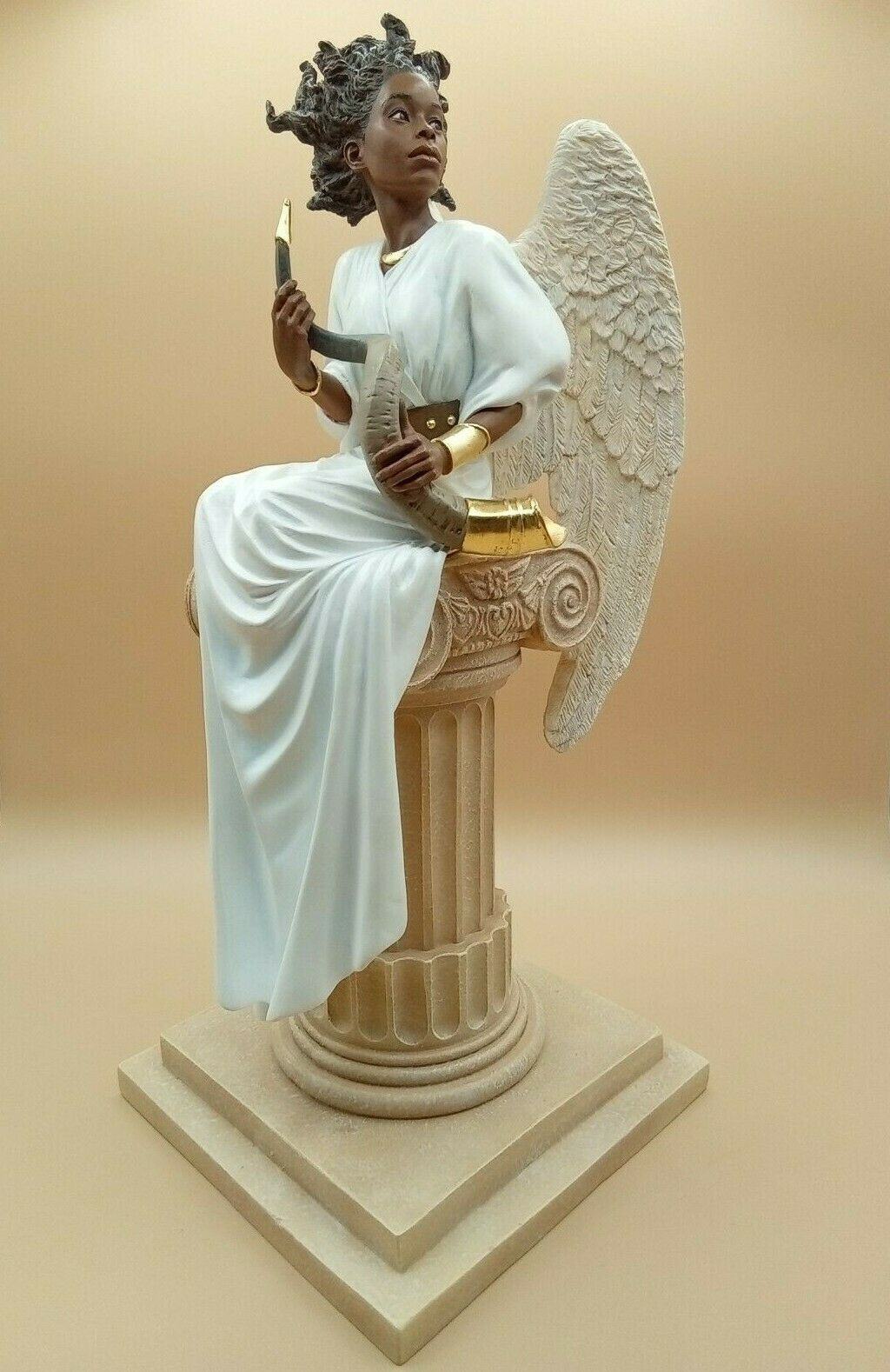 This is a more contemporary design and features an African American angel preparing to sound the alarm. 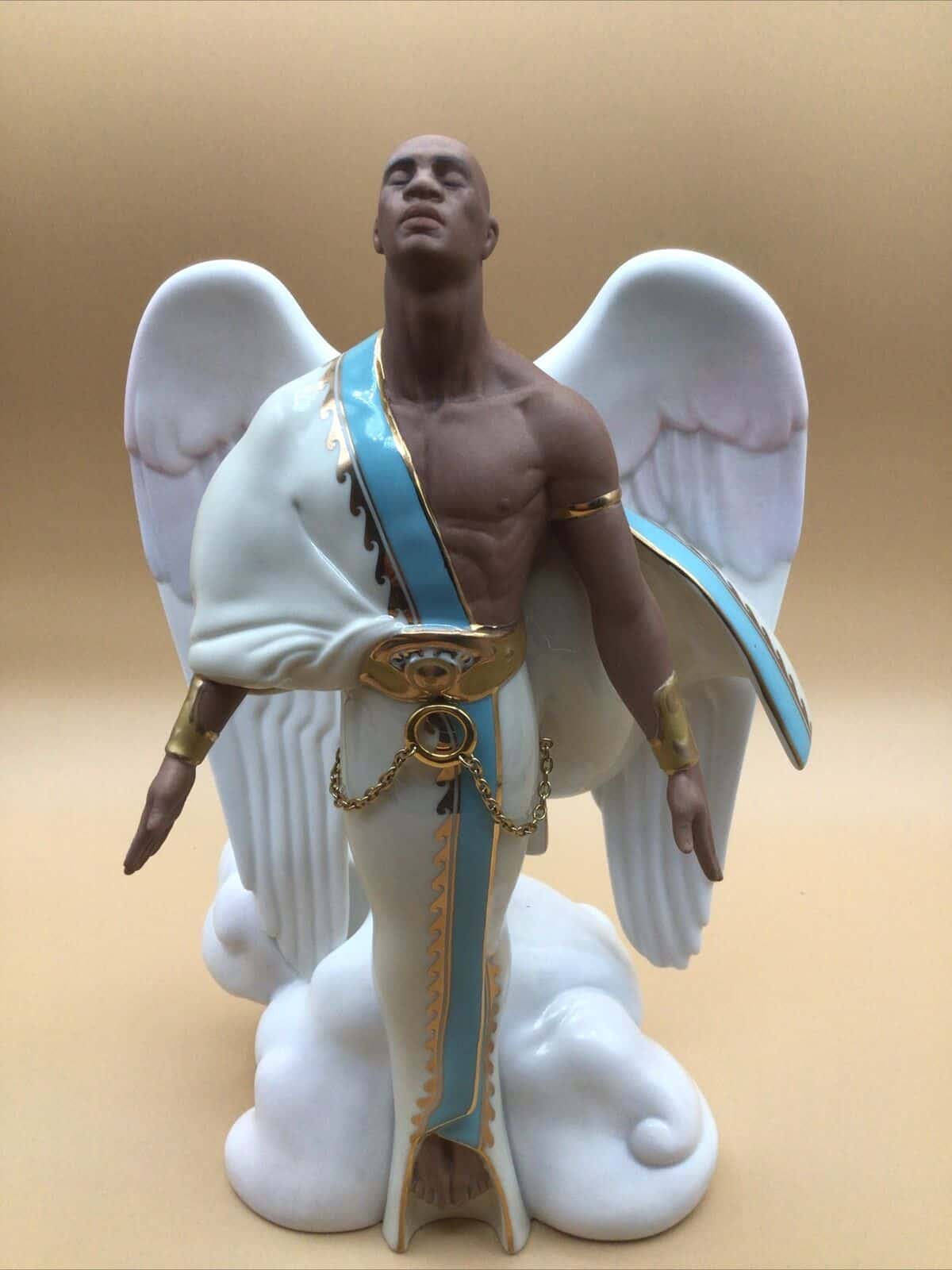 This is another figurine by Thomas Blackshear. It also depicts an African American Angel, this time in its ascent into glory. 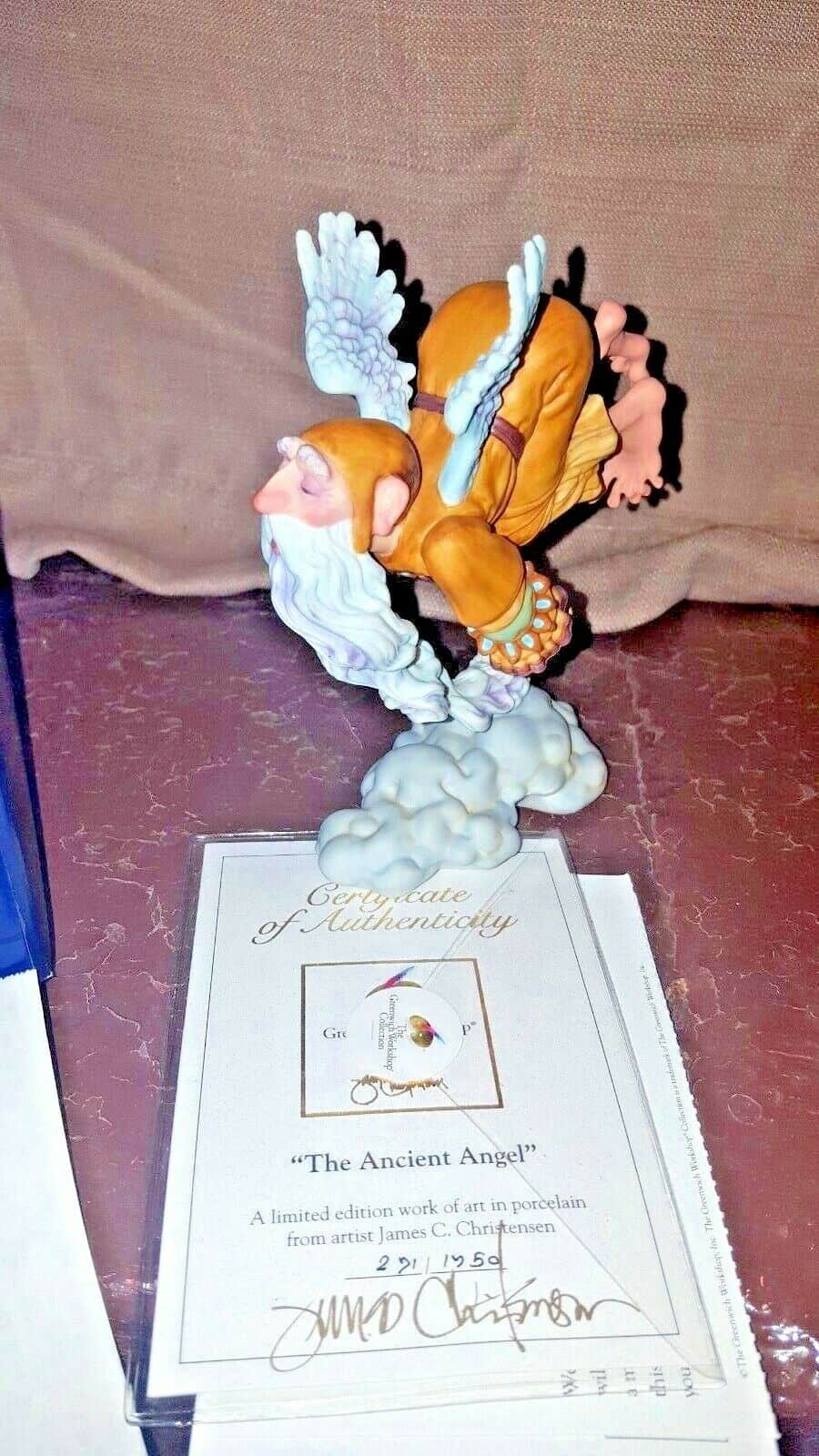 This figurine features an ancient, bearded angel. It has been signed by hand by the artist,  which increases its value. 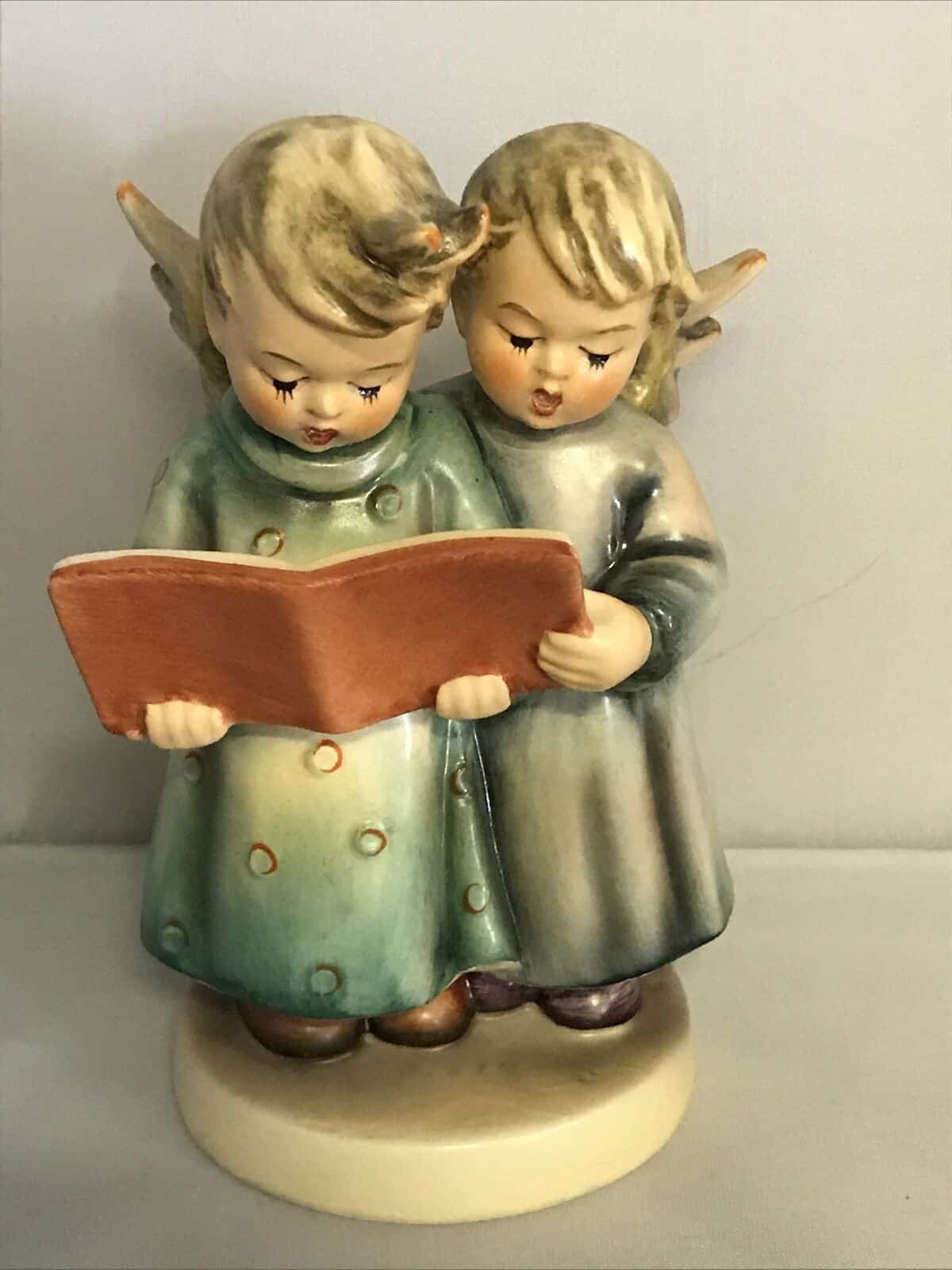 This Goebel figurine has two angels with delicate facial features, holding a hymn book and singing a duet. 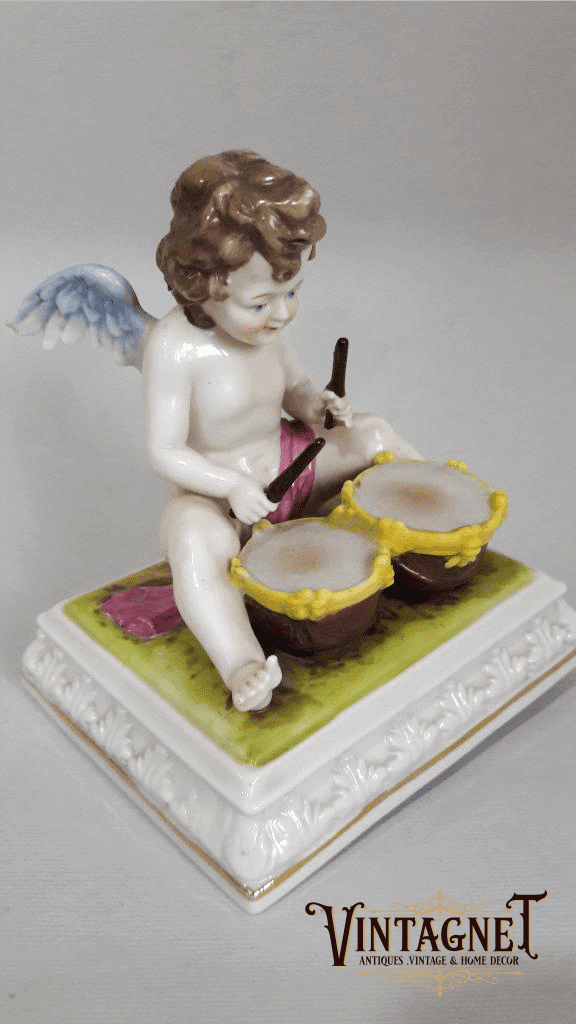 Featuring an angel playing drums, this figurine is made from Thuringian porcelain in the early 20th century. 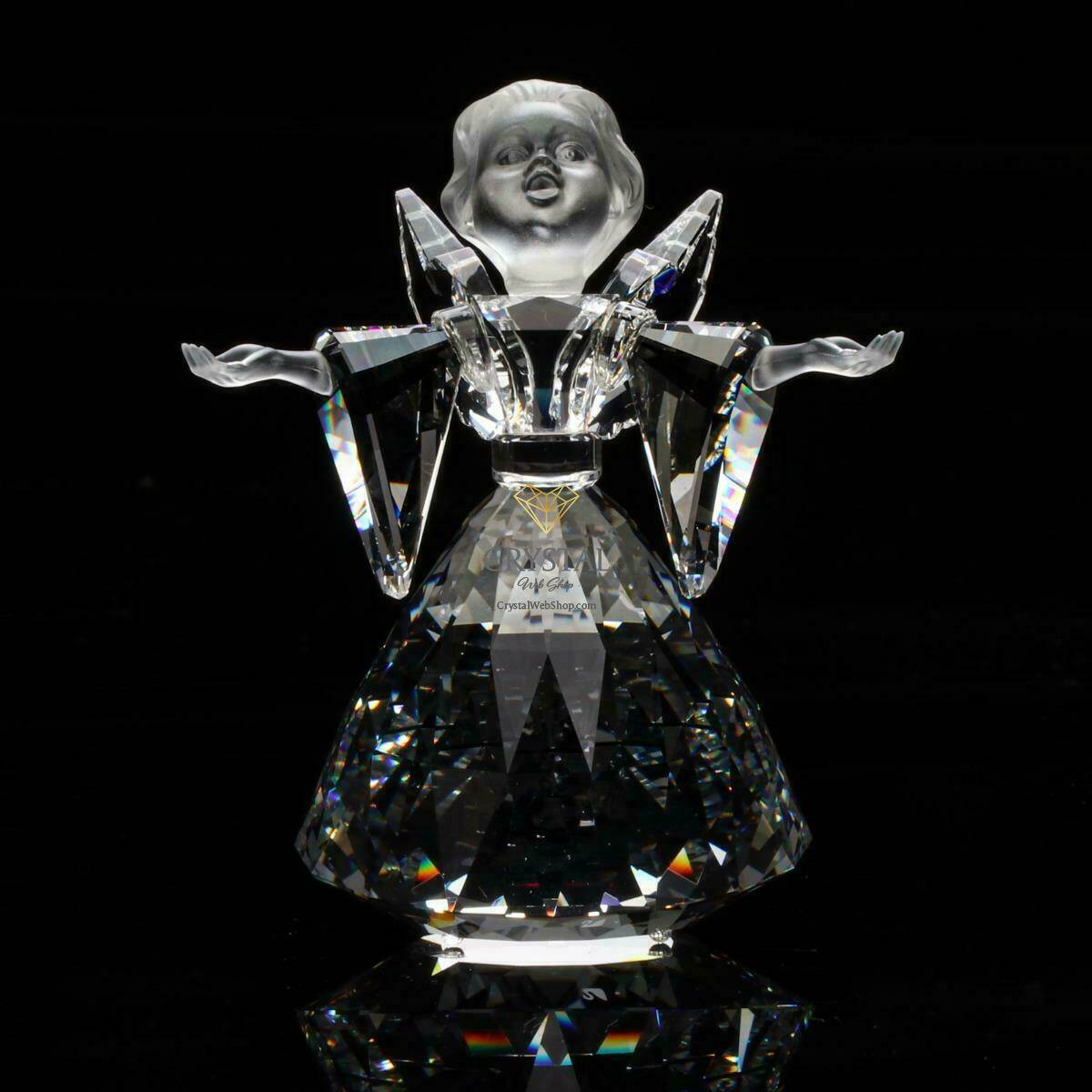 Designed by Adi Stocker, this Swarovski angel is made from clear crystal and has a frosted face and hands.

If you have any questions about angel figurines, leave them in the comments section. You can also let us know if you discovered you are the lucky owner of a valuable angel figurine.