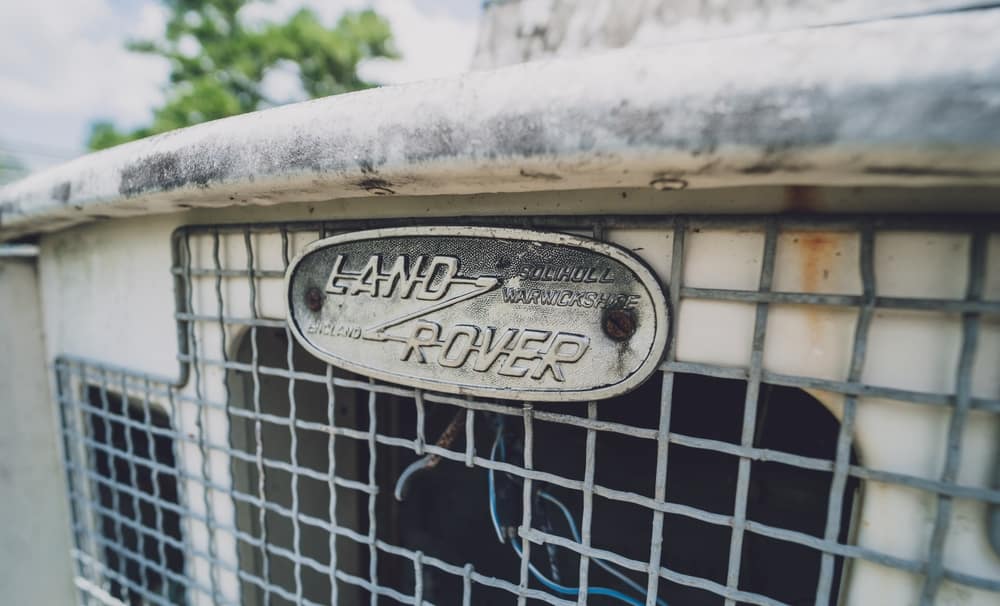 Old auto badges have always been collector’s items. The affordable price and size make them the perfect item to get started in the world of collecting.

Automobiles weren’t always as widespread as they are now, and they were formerly considered luxury items available exclusively to the wealthy.

That is why, from its origin, an automobile has been a status symbol of purchasing power and status. And so are their badges and logos.

Today, all cars come with a plate that includes not only the brand name but also the model; however, this was not always the case.

Badges on cars were very important in the old days and became more valuable as certain car companies disappeared.

If you are interested in collecting car badges or want to know how much value they have, you have come to the right place.

We will not only teach you everything there is to know about different antique auto badges, but we will also tell you how much they are worth and which ones are the most sought-after and uncommon.

That way you can easily enter the interesting world of collecting car badges.

Antique Auto Badges: Everything You Need to Know

There is much more behind each auto badge design and you must know each one of them in depth to be able to appreciate, evaluate and invest correctly in them.

What are Antique Auto Badges?

Car emblems are similar to ancient armies’ or feudal lords’ coats of arms.

Coats of arms, like vehicle emblems, serve a variety of purposes. A coat of arms was used to demonstrate power; not every family could afford one, and soldiers usually painted them on their shields or banner.

Because there was no common uniform, it also served to distinguish the different houses of arms in a fight, ensuring that you were not attacking an ally

In general, coats of arms are depicted with figures that are relevant to the house on which they are displayed.

If you see a lion, for example, it is a symbol of valor and courage. Sometimes they have flowers that represent the region where the army is from.

The same is true for car badges. The mustang horse of Mustang cars warns you that you are in the presence of something wild and untamable. This alludes to the car’s speed and power, which wants to distinguish itself from the competition by claiming to be the fastest and wildest in the business.

That is why car badges have been collectible and prized since their inception. It’s also true that automobilia became an important brunch in the car collecting hobby, not just for antique car badges but also for filling station signage, dealership, and gas pumps. They are a symbol of power and represent the worth of your vehicle.

What Materials do they Contain?

Vintage car badges go through a complex process called champlevé. They are usually made of cast metal as a base and then coated with porcelain or glass.

They stamp the design on a copper base before engraving it. Finally, the design is filled with glass powder in the recessed areas of the design and fired in the oven.

After the emblem is removed from the oven and allowed to cool, it was chrome and polished before being installed somewhere on the vehicle.

The location of the car’s emblem varies depending on the manufacturer, but most early cars had it on the hood where the radiator is stored, in plain sight of everyone, so that it is always noticed. That is also a reason why it was called a radiator emblem in the past.

Starting in the 1940s, companies reduced the costs in the production of cars, because as a luxury item, it was not accessible to everyone and had a small market.

As a result, manufacturers started to use plastic to make badges or even a sticker on the inside. You must consider this because it is one of the criteria that collectors consider when purchasing a badge.

Other important criteria include the badge’s rarity, beauty and finish, any historical significance it may have, and personal preference for a specific car brand.

It should be remembered that car brands, like football teams, have fans who are devoted to them to death.

Why are they collectible?

Aside from being beautifully crafted items, for many car enthusiasts, they may be the only pieces they can get to add to their collection.

Every car enthusiast wishes to have a garage full of authentic classic cars with the best designs in history, but that is not a luxury that most people can afford unless they are millionaires.

Instead of the entire car, you get its essence, the object that represents and identifies it.

It’s similar to a war chest. As an example, ancient warriors would collect small bones or teeth from their enemies and hang them on their belts or make a necklace out of them.

The more of those bones you had, the more cautious you should be of that warrior because it indicated how many people they had lost to him.

Collecting car emblems is also a good idea because they are highly sought after by vintage car restorers.

Some people pay a lot for a car badge because it represents the finishing touch before their restored part is ready for sale and also greatly increases the value of the restoration during the sale process.

Are old car badges worth anything?

Car badges are ideal for getting started in the world of collecting while also earning some money. Their prices are not expensive, but they can vary greatly depending on their condition, originality, rarity, or historical significance.

You must bear in mind that when the boom of cars began, the factories that produced them were many more than those that exist today. By the early 20th century, there were roughly 100 companies making cars in the United States alone.

By 1910 there were already more than 250 and little by little the number was decreasing. After World War I and World War II a good number of factories declared bankruptcy and their numbers dropped to less than 100.

This means that there are many missing car brand plates, and restorers can pay a high price for a rare item.

An authentic badge can cost from $50 to hundreds of dollars in different auctions, swap meets, flea markets, or antique stores. If you are lucky, you can also find them in old car junkyards. In the past, it was a prime place to find them but now it is not that common.

Following that, we will leave some vintage car badges for you to get an idea of the values that are handled in the antique shops and online pages like eBay or Etsy:

We will show you some of the most well-known car brands and their badges. Many of them have been modified over time and are no longer the same ones we know, whereas others have kept their logos with minor changes or without any type of alteration.

Many of them bear the name of the company, while others bear a logo derived from an animal, a monogram, or a coat of arms.

The luxury brand uses a stylized A, which represents a pair of calipers that indicate the engineering precision of the luxury vehicle.

One of the firm’s technicians created Alpha’s first shield. As he waited for the tram in Milan’s Piazza del Castello, he noticed a snake eating a man in the main tower of the Sforza castle.

The dragon-headed serpent represents loyalty, courage, insight, and prudence, while the devoured man alludes to his adversaries.

Later, a gold ducal crown and the Milan coat of arms were added to the snake, as well as a red cross on a white field surrounded by a blue circle and the words ALFA and MILANO, separated by two Savoyard knots representing the Savoy monarchy.

Over the years it changed to ALFA-ROMEO at the top and MILANO at the bottom of the crest.

The first emblem was a golden circle with green letters A and Sr intersecting. In the 1920s the logo consisted of the company’s initials in black on a golden disk.

In 1947, a new logo included the name Aston Martin in a green rectangle in the center of a pair of unfolded wings, inspired by mythological figures.

Gordon Crosby designed the logo, and it depicts the acronym of its founder’s surname in the middle of two extended wings that represent the speed of its first models.

The emblem incorporates the colors and shape of Bavaria’s blue and white checkered flag, as well as a propeller against a blue sky, as the luxury firm began as a manufacturer of aeronautical engines.

BMW was formed by the merger of BMW and Rapp Motor, which had a black circle in its logo that was retained for the new brand.

The crown represents the Cadillac’s royal heritage as well as the spirit of automotive pioneers.

The original Dodge Brothers Company logo featured a circle surrounded by the text “Dodge Brothers Detroit USA” printed on a black background and in gold lettering.

The logo featured an interlocking DB within a 6-pointed star in the center.

The current logo, which depicts a ram, came out in the late 1990s. This Ram first appeared as a hood ornament on some trucks in the early 1930s and was introduced on automobiles in 1954.

Some attribute satanic or Freemasonic meanings to these two symbols, the ram, and the 6-pointed star, but no one explained the symbol’s meaning.

The Prancing Horse, a famous Ferrari symbol, was the emblem of the legendary Italian air force pilot Francesco Baracca during World War I.

Baracca´s mother advised Enzo Ferrari to wear that symbol for good luck, and the Ferrari owner did not hesitate to do so.

Later Ferrari added a yellow background because it is the city of Modena’s official color.

The blue oval was first used in 1907, and it is the same color as Finland’s flag. Harold Wills, Ford’s first Chief of Engineering and Design, is credited with designing the font on the Ford badge, which he used on his business cards.

The blue color had a shiny finish and silver details in the 1970s, and it received a touch-up in 2003 to commemorate the brand’s centennial.

The firm’s logo is based on the Taurus zodiac sign, but some believed that Ferruccio Lamborghini used a bull due to his love of bullfighting.

What is true is that Ferrucio named several models of the brand with names alluding to bullfighting.

Ferruccio Lamborghini and Enzo Ferrari were fierce rivals. Ferruccio worked for Enzo, and after several disagreements about how to make specific models, Enzo told Ferruccio, “A tractor manufacturer is not going to teach me how to make sports cars.”

That marked the end of their professional relationship. Following that, Ferruccio Lamborghini established his own car company with great success. The tractor manufacturer knew how to build sports cars.

The star was created when engineer Daimler drew a star on a photograph of his home, indicating that his family’s prosperity would come from there.

Later, the three-pointed star would represent the brand’s domain across air, sea, and land.

It was first used in 1909 and was combined with the Benz laurel in 1926 to represent the merger of both companies. It was later redesigned in 1937 and is now the German firm’s logo.

Did you ever think that auto emblems would have so much history behind them?

They are incredible pieces that arouse a lot of passion among any vintage car enthusiast.

If you have any badges lying around and want to sell them, have the same precautions that you would have with other antiques.

Find out beforehand to know how valuable it is and if you are thinking of starting a collection of car badges, we hope that this article has served you well and is your basic guide to gaining more knowledge.