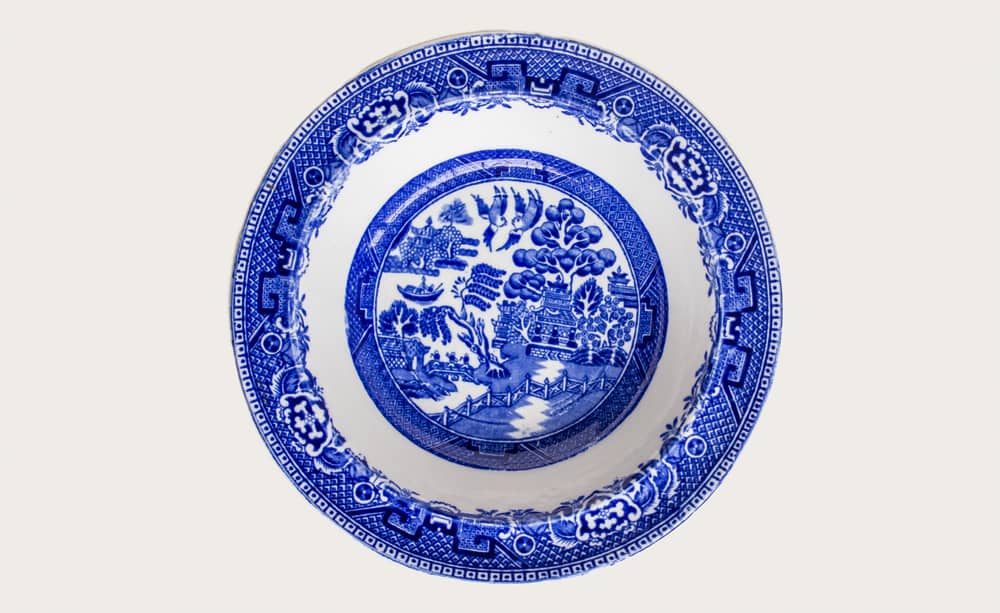 Can you pictures china set with a particular blue and white design? Seeing as it’s one of the most popular designs still owned today, you might have been thinking of blue willow china.

Blue willow china is a design that originated in England almost three centuries ago. Older pieces of this china are now collected as an antique and modern manufacturers continue to use the design on new products.

Let’s dive into how to identify blue willow china pieces and learn how much they are valued today.

1. What Is Blue Willow China?

Blue willow china is one of the most recognizable types of white ceramic china ever used. Sets and pieces include plates, bowls, serving platters, tea cups, spoons, teapots, jugs, and more.

The blue willow design is transferware, which means it’s created by a blue and white transfer print design. The design was originally sketched into copper plates by Thomas Minton and then printed onto porcelain or another material. This process began in England in the late 1700s.

Nowadays, we may also see the pattern transferred onto paper for easier mass production.

The blue willow design was inspired by early Chinese pottery designs, but the pattern antique collectors look for today was bought by Englishman Thomas Turner and popularized on the market in 1779.

2. The Story of the Blue Willow Pattern

The blue and white design of the blue willow is easily recognizable by elements it pulls from an old legend.

In the story, a daughter falls in love with her father’s secretary. The father does not want them to be together due to their distinct social classes, so he tries to separate his daughter from this forbidden lover by building a large fence.

The daughter can only walk among willows and water, in despair and missing her lover until she manages to escape. She and her lover are then chased across a bridge by her father.

Sadly, it ends with the demise of both the daughter and the secretary. The gods take pity on the lovers and transform them into doves who can live in peace.

Because of this story, you can find images of birds, willows, bridges, water, and more emblematic items within the blue willow pattern.

3. How to Date Blue Willow China 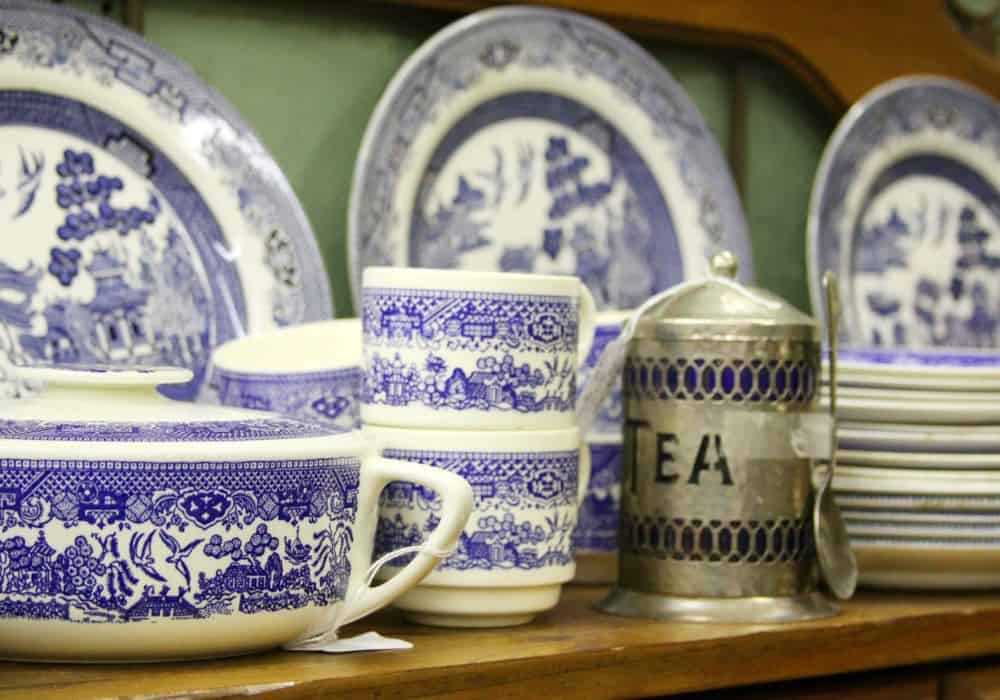 Blue willow china was inspired by ancient Chinese designs on porcelain and pottery in the 1780s. Some of the most highly-valued blue willow pieces were created in Great Britain from about 1780 to 1820.

After this time, especially in the 1900s, blue willow pieces began to be manufactured more in the United States and Japan.

Older pieces will likely have a softer glaze and be lighter in weight. They may also have some light cracking on the surface.

It’s no surprise that China is famous for its dishware, porcelain, and pottery. By the 18th century, these products began to be imported to Europe and around the world, showing the inspiration for the Chinese blue willow design.

Although it inspired the English blue willow design, Chinese blue willow pieces were created much later and are some of the newest and cheapest versions of the pattern. You will be able to identify them by a “Made in China” marker.

British blue willow pieces are some of the most sought-after antiques. You may be able to date these through their manufacturer marks. Some famous British manufacturers included Spode, Churchill China, and Staffordshire.

Spode was known as the first British manufacturer of blue willow china in the late 18th and early 19th centuries. You may be able to identify a Spode piece by its manufacturer’s marks with a date mark, usually in red or black ink. The date mark could be a letter over two numbers or a combination of letters.

Churchill China can be identified by two C’s on the bottom of the piece and, potentially, a “Made in England” mark.

The earliest pieces were often unmarked, but those after 1891 often had a country-of-origin mark.

American blue willow began to be sold in 1905 by the Buffalo Pottery Company. Many of their pieces can be identified by a letter-number combination.

You may also find American products from the Royal China Company (from Ohio) produced in the 1940s.

These pieces have a much stronger presence of the color blue. They will also have an obvious “Made in Japan” marking on the bottom if they’re from 1920-1950 or so. Many include two birds in the design that are noticeably plumper than English blue willow bird patterns. 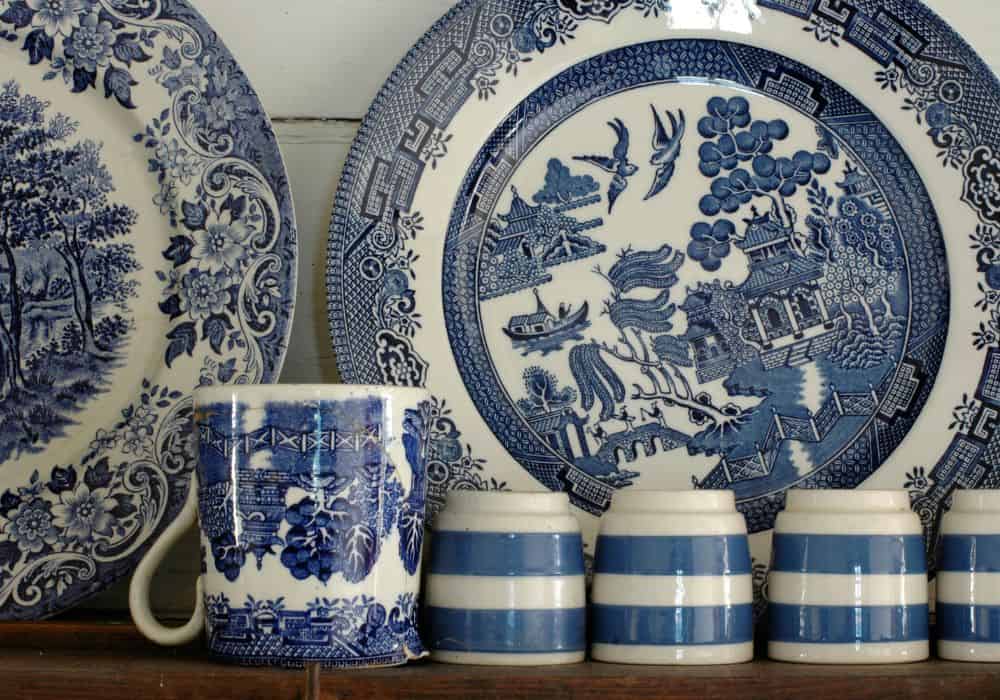 Blue willow china can be valued at anywhere from $10 to over $1,000. Valuing your blue willow china depends on how old it is, its condition, where it’s from, and the collection it belongs to.

So long as it’s in good condition, the older your blue willow piece, the more it may be valued. Pieces from the late 18th and early 19th centuries are usually the most expensive.

For example, a blue willow plate from the early 19th century can sell for $100-$200, while larger or rarer pieces – such as a pitcher – could sell for thousands.

Even if you have an old blue willow piece, it won’t be worth much if it’s scratched up and cracked. Even small chips can chip away – pun intended – at its overall value.

Older blue willow pieces in excellent condition are highly sought after, especially if they’re from the UK.

Generally speaking, pieces from Great Britain are the most valued, as they’re some of the oldest antique blue willow pieces you can find.

Conversely, since American and Japanese blue willow is newer, they are usually cheaper. Later Japanese plates, for example, might only be valued at $7-$10 per plate.

Large blue willow pieces will bring in the most money. These include serving platters, pitchers, soup tureens, coffee pots, and covered dishes.

If you have more than one piece with the same mark, the value also increases. Preserved sets are rare and can cost thousands of dollars. 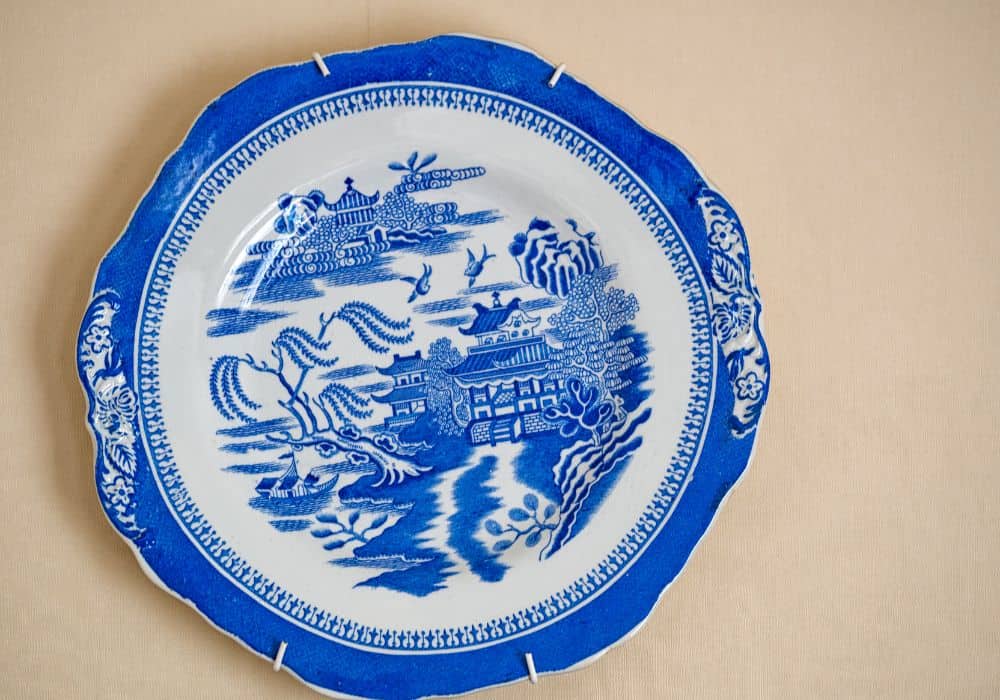 Most china is made of a combination of different materials, such as clay, quartz, kaolin, feldspar, and others. Any china – especially antique blue willow china – should be stored properly to avoid chips, cracks, and the fading of the design.

Clean your antique blue willow china before storing it. If you store the china with dust or dirt, it could scruff or damage the china over time.

As a general rule, always clean your china with a mild agent mixed with warm water. To prevent potential chipping, you can line the bottom of your sink with towels or a rubber mat.

If your china has any brown stains, you may be able to get rid of them by soaking them in detergent, applying baking soda and vinegar, or using a hydrogen peroxide solution.

After cleaning your china, set it down to fully dry before storing it.

Choose your china container. If it’s an antique, consider showing it off in a display cabinet with a glass-front cabinet. These are great for preventing dust build-up.

If you choose to store your china in a closed display case, dust it every six months. If the case is open, dust it weekly.

If you prefer to have it protected and put away, consider plastic bins as they’re sturdier and more durable than the cardboard box alternative. There are also quality quilted storage boxes created specifically for storing china that you can buy online.

You’ll want multiple small and medium-sized bins to avoid stuffing too many pieces together or creating an overloaded box that is impossible to transport. Be sure to clearly label your bins.

Buy acid-free tissue or foam wrap to protect your china. Don’t use anything with color, like newspaper, to avoid any mishaps with ink transferring onto the china.

Place foam or bubble wrap on the bottom and sides of your container before starting. Then, wrap each china piece individually to avoid clinking. If you have a particularly delicate piece, double wrap it to be safe. You may also want to buy dividers to place between the pieces.

If using boxes or containers, store your blue willow china appropriately. Although it may seem counterintuitive, store plates and bowls on their sides for the best protection. Make sure their edges are wrapped tightly.

Store any cups right-side up. Use your dividers for extra protection.

Blue willow china isn’t your basic run-of-the-mill dishware – it also comes with its fair share of odd and interesting facts.

Just because it’s blue willow doesn’t mean it’s antique; blue willow china is still made today and is one of the most popular designs out there. If you’re looking for a true antique, check out these resources:

1. Where Did the Blue Willow Design Come From?

The blue willow design is inspired by Chinese designs and an old fictional story. The design pulls elements such as a bridge, two birds, and willow trees from the story.

While the inspiration comes from China, the actual creation of the design began in England by Thomas Minton and Thomas Turner in the 1770s.

2. Are American Blue Willow Pieces Worth Anything?

Most American blue willow pieces are from the late 1940s onward, meaning they’re valued much less than other blue willow pieces. If you’re lucky enough to have pieces from the Buffalo Pottery Company, they could be more valuable.

For example, this blue willow serving bowl by the Buffalo Pottery Company is worth $150.

3. What Are the Most Expensive Blue Willow Pieces?

The most expensive blue willow pieces are the old English ones. The larger the piece, the higher it is valued. Be on the lookout for pitchers, teapots, large serving dishes, and other unique pieces.

If you have multiple pieces from the same set, you’ll also be able to sell them for more.

4. How Do I Know If My Blue Willow Piece Is Valuable?

Pinpointing the manufacturer and era of your piece is the best way to find its value. You can also look to professional appraisers, owners or employees of antique shops and auctions, and those who attend the annual blue willow conference.

Blue willow china sports a beautiful pattern representing the tale of forbidden love. Originating from the late 1700s, this china is still manufactured and used today.

Some of the most expensive pieces are large creations originating in England. If you have one or a few in your possession, be sure to store them properly so you can show them off or save them for a later sale.