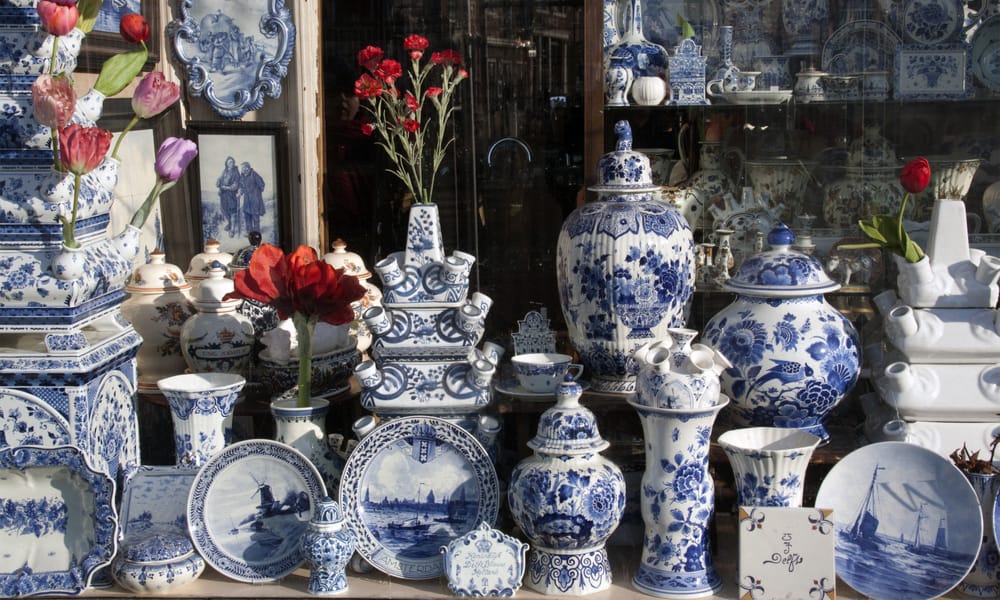 The Larkin Soap Company created Tough and durable Buffalo china in the 1900s with the idea to give it to customers purchasing soap. Unfortunately, they ended 102 years of history in 2003, when their offshoot Buffalo Pottery stopped working once and for all.

This pottery was an inexpensive dish type that came in various patterns and colors. People used it in restaurants, hotels, and trains as a part of the railroad china boom. Nowadays, antique Buffalo china is a highly desirable collectible, but you can also use it in everyday life if you prefer that way.

The Larkin Soap Co. from Buffalo, New York, began producing china and pottery in 1903. That year, the company started its policy of offering customers utensils as a gift when purchasing soap.

Soon after, they developed a multi-colored Gaudy Willow line and continued with pottery decorated with game, fish, and fowl.

From time to time, the company designed historical and commemorative lines showing George Washington, Roosevelt Bears, and Cinderella. You should set aside at least $1,000 for any of those pieces.

These pieces contained scenes from popular books, like Cranford and The Vicar of Wakefield. The most popular were dishes decorated with segments from the English village life.

A similar series was produced once again from 1923 to 1925. Interestingly, Deldare Ware has become the most collectible Buffalo pottery until now. Most pieces from this line are inexpensive and typically cost $25 to $100. However, you can find rare collectible items topping the $1,000.

In 1911, the company introduced the Emerald Deldare pottery line decorated with illustrations from William Combe’s The Three Tours of Dr. Syntax. Nowadays, these humorous pieces are costly and typically reach $1,500.

The next step was the rust-colored Abino line inspired by the sea from 1912, featuring scenes of sailboats and windmills. The added artists’ signatures were a crucial novelty. Nowadays, it is challenging to find any Abino pieces, and collectors pay hundreds and even thousands of dollars for an item.

The company modernized the manufacturing process in 1915 and started more outstanding vitreous china production. In that period, they were focused on the railroad, restaurant, and hotel orders.

However, the fine commercial-grade, home-use china production started in the early 1920s, including the well-known Bluebird pattern.

In 1932, the Chesapeake and Ohio Railroad decided to honor George Washington’s 200th birthday. Therefore, they ordered special china set with President’s portrait and a stylish gold rim from Buffalo pottery.

Even though the company made an unprofitable deal and worked out of a sense of honor and lost money, the calculation paid off later. They got numerous orders for custom china and started producing lines for:

The first Christmas plates appeared in 1950 as a gift for employees and customers during the next decade. Nowadays, this line is considered rare, and it is pretty costly.

The Larkin Soap Co. was closed in the 1940s and existed only as a mail-order company for two decades. In 1962, it officially disappeared from the business.

In 1956, the company got the new name, Buffalo China, but soon the Oneida Silver Co. took it over. They still produce commercial-grade pottery for the military, hospitals, restaurants, and clubs.

You won’t have any problems identifying Buffalo Pottery since this company was one of the few potters in the US to consistently mark their products. Even though the company used various marks during the years, they typically featured an American bison and the date. 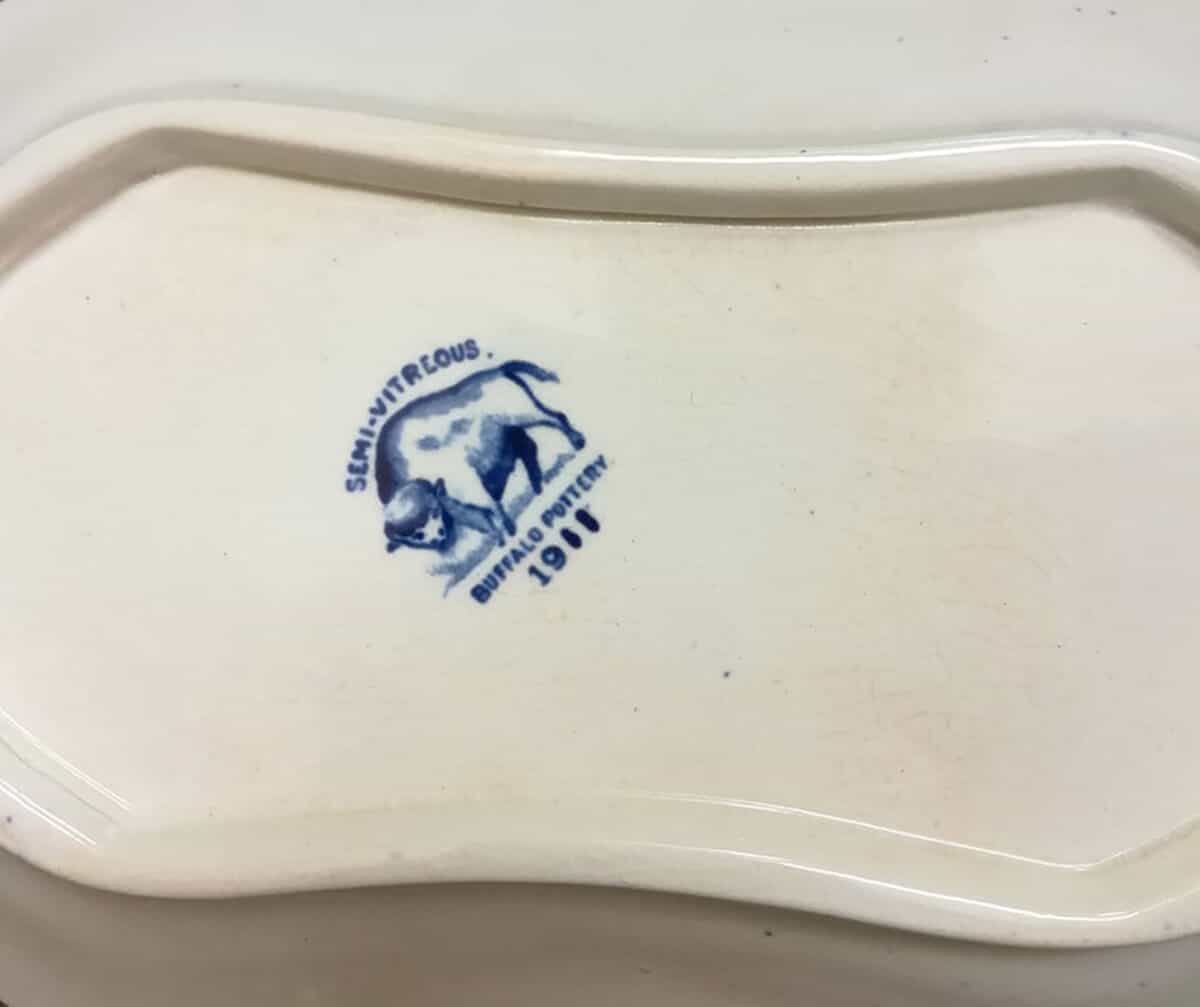 In most cases, you can also see their name on pottery. Interestingly, the label always included the customer’s name until 1940, making identification even more effortless.

You can notice that the maker’s mark appearance changed over time, but it stayed easily identifiable. In fact, you can quickly date each piece by the logo look.

The Buffalo company produced a few different china patterns over the years. The list of the most popular variations includes: 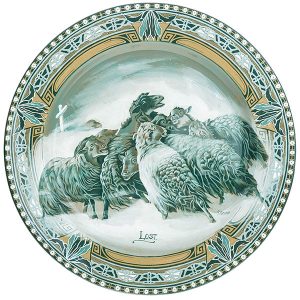 This pattern style included scenes represented in an olive green color. In most cases, they were Cecil Aldin’s drawing reproductions. For instance, the company used numerous sequences from his painting, the Fallowfield Hunt. Particular scenes became a part of famous pottery design, like: 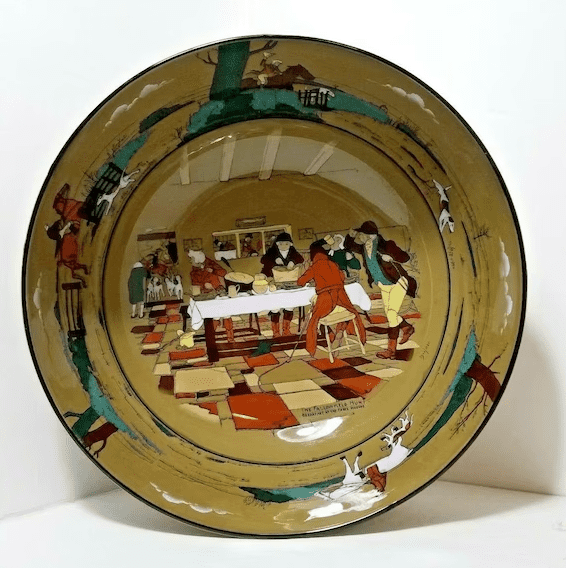 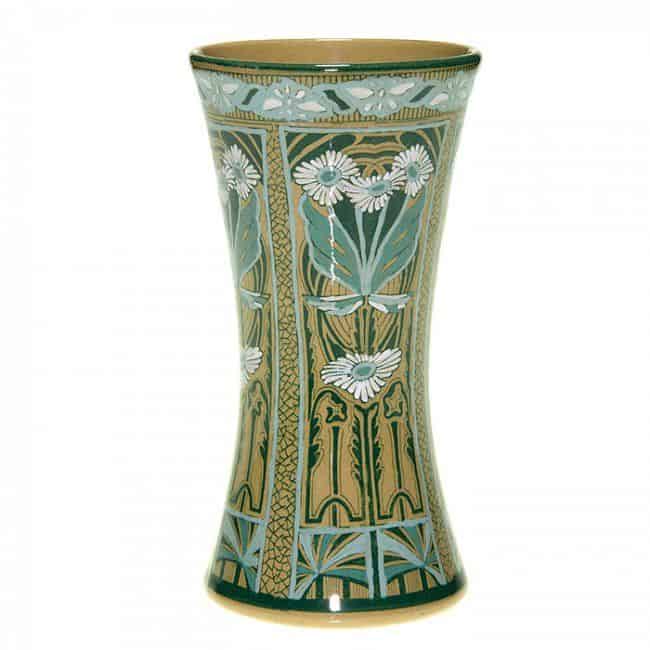 The Emerald Deldare produced in 1911 was a rare Buffalo pottery variation. Since the production lasted only a year, collectors highly appreciate every piece appearing on the market.

This hand-painted design represents classic Art Nouveau style. Besides a verse written inside, you can recognize these pieces by geometric and floral motifs on a beautiful olive green background. 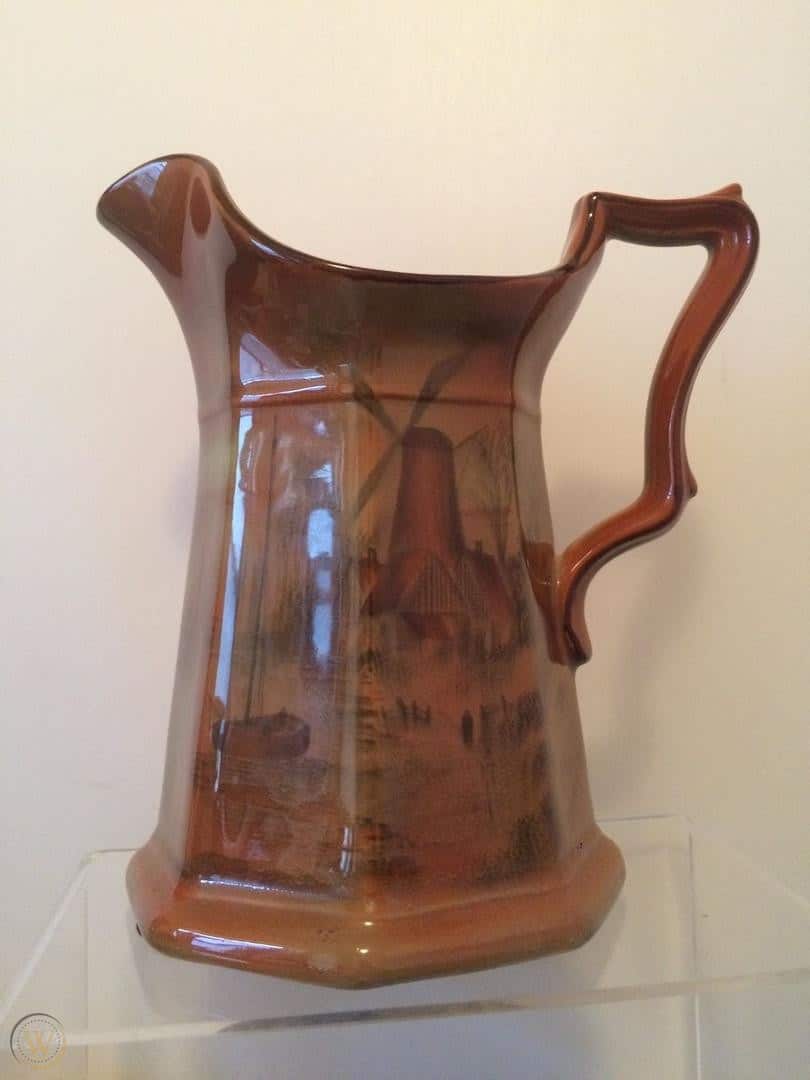 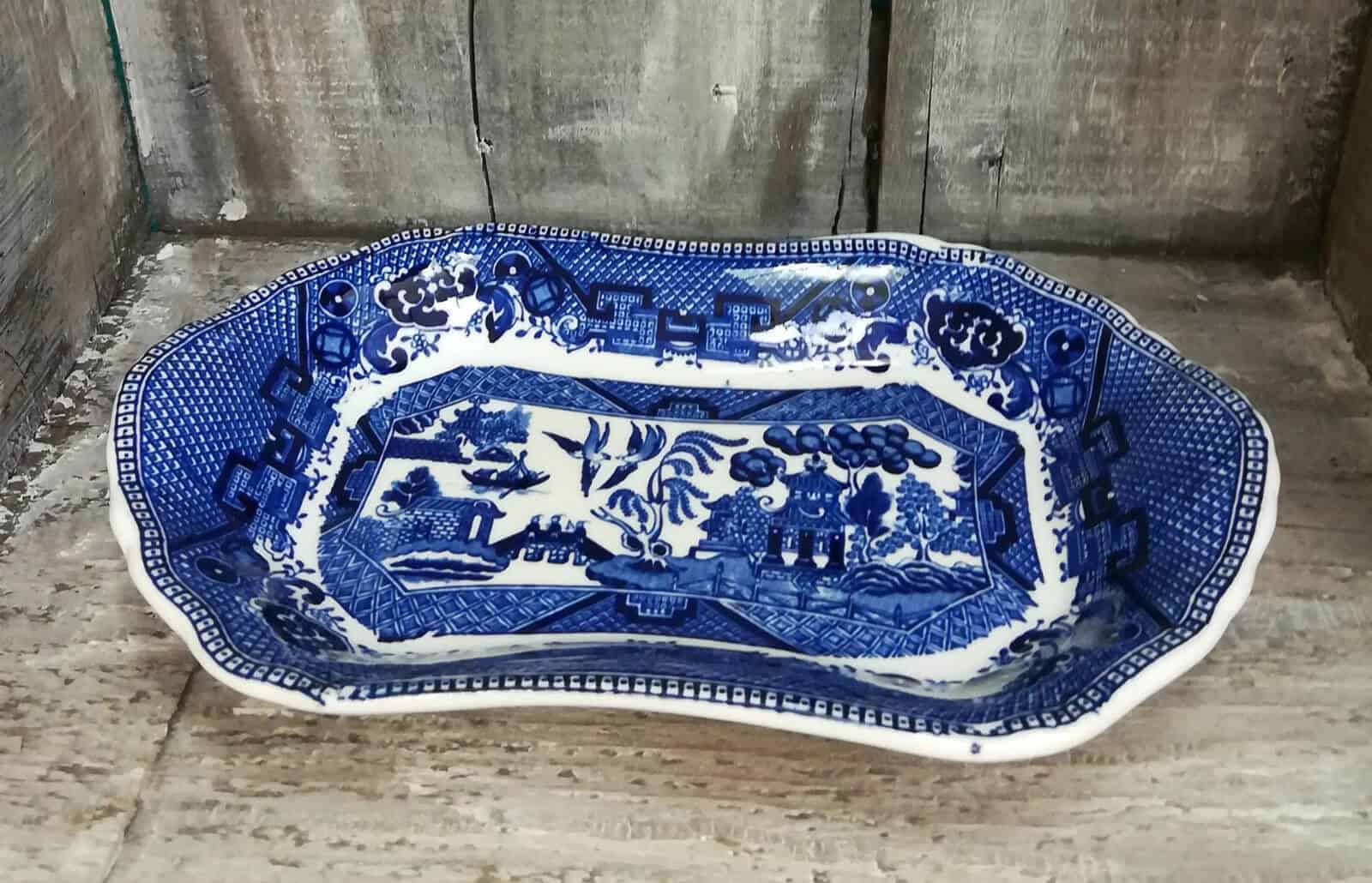 This pattern was produced from 1905 to 1916. It typically includes royal blue Asian motifs on a white background. 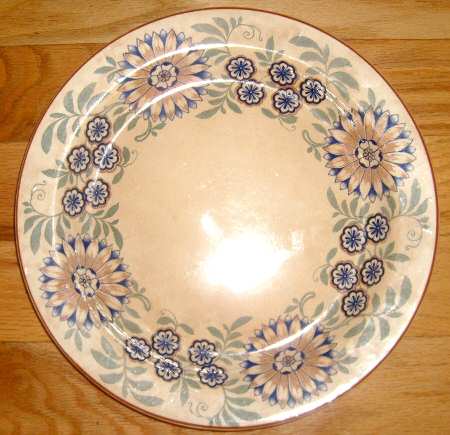 This unique motif contained tan and blue flowers with greenery on a light tan background. It appeared on the market in 1910. 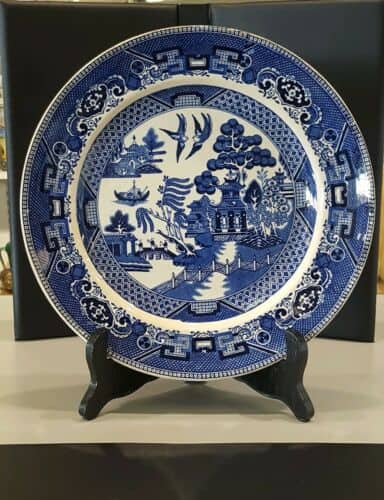 The Buffalo company took over an ancient Chinese love story and used this lovely motif to create an American version of the Blue Willow pattern.

This pattern was dedicated to a Chinese legend about a young girl who was in love with a young man. Unfortunately, her father picked out an older man for her betrothed. The betrayed fiancé followed and killed them in revenge. Then, he burned their home to the ground. 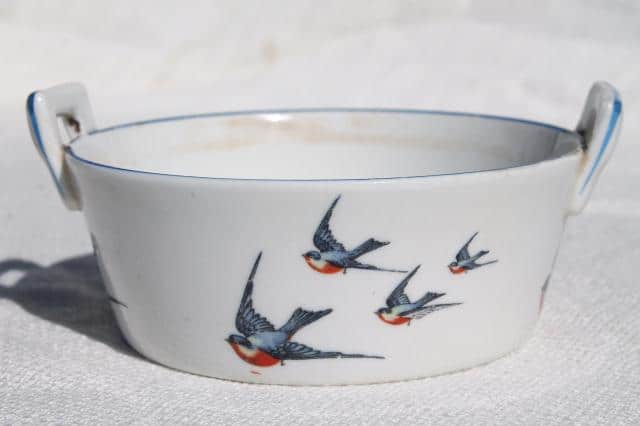 The Art Deco style Blue Bird pattern appeared in 1919, and the company produced it until 1922. These pieces are always white with a characteristic blue rim. 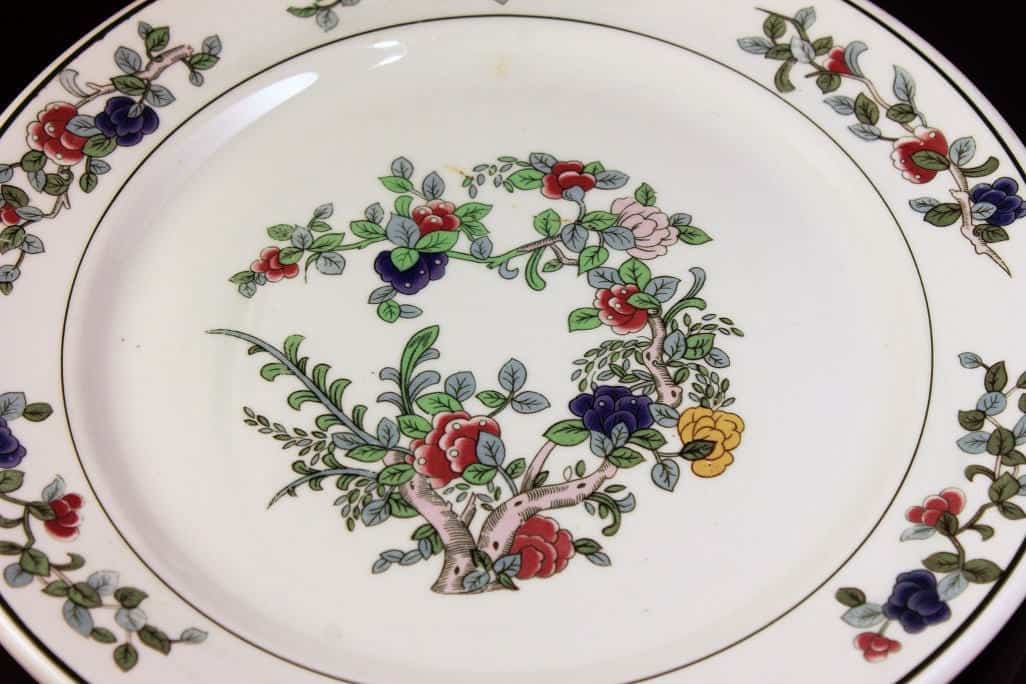 Mandalay was an oriental floral pattern on a white background made in 1930. These pieces contained sage green leaves surrounded by flowers in pink, blue, and lavender color.

The Chessie Cat pattern from 1933 contained a sleeping tabby cat on the white surface. You can see only its face and ear peeking behind the pillow. It was an order for the Ohio and Chesapeake Railroad.

Deldare line is trendy nowadays, and many collectors look for this pottery. Luckily, most ordinary tableware pieces, including mugs and various plates, are affordable, and you can buy one for only $25 to $100.

If you prefer the most quality items with complicated and trendy scenes, you should be prepared that the unique ones can cost up to $1,000 at auctions.

Emerald Deldare is even more appreciated, and you can find these humorous, harder-to-find items for more than $1,500 online. Be prepared that their price is even higher at an East Coast antique show since scarce Buffalo Pottery pieces are in demand there.

You can find most pitchers for about $400 to $450, while small vases typically reach $200 to $250 on the market. Plates and mugs are pretty common and easy to find, making them inexpensive. In most cases, it will be enough to set aside $10 to $100 for a piece.

Buffalo pottery is widely available on the market, and you can find most pieces in different patterns effortlessly. Even though these dishes are typically inexpensive, you can discover that prices significantly vary, depending on the selling place.

As always, you can find this pottery type on the Net. Popular selling sites, like eBay, Etsy, and Amazon, are unlimited sources of collectible Buffalo china. Learning to recognize desired pieces from the company’s different lines is necessary before picking out those you have chosen to collect.

It is the place for the most dedicated Buffalo pottery collectors who look for the rarest and most expensive pieces. You can find an extensive selection there, but be aware that most items will be more costly there than elsewhere.

Create Your Own Collection

Over a century-old Buffalo pottery is an excellent option for any home, and it is unlikely for those utensils to go out of style. That is a probable reason for most collectors to start looking for these beautiful pieces and valuable parts of American history.

The best part is that you can create your collection on your own, without any imposed rules. Since there are a few different lines, you should pick out the one you like the most and start your new collection.

Nowadays, it is possible to find numerous items online and buy them separately at an affordable price. For instance, you can purchase dinner and salad plates, soup bowls, and mugs with the same motif separately or in sets.

Keep in mind that serving platters, egg cups, and pitchers are less known but valuable additions to every collection. Nowadays, children’s sets can be worthy, particularly rare ones.

There is one more thing! Unlike other pottery, Buffalo china pieces are highly durable, and you can collect and use them in everyday life. They are difficult to break, making them practical. Plus, finding a replacement is not a problem if an accident occurs.

The Buffalo Pottery Co. was established in 1901 in New York as a Larkin Soap Company offshoot. The goal was to create dishes to increase soap purchases.

Those dishes were excellent and inexpensive options for hotels, restaurants, and railroad dining cars in the past. Nowadays, Buffalo pottery is appreciated collectibles that come in many patterns and colors.