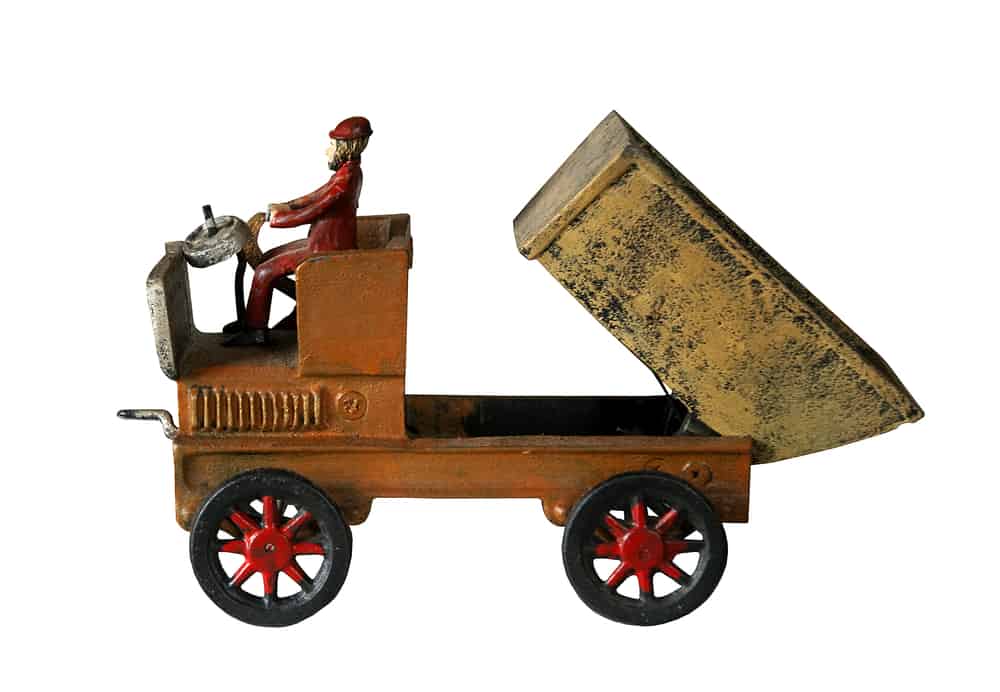 For a relatively short period in modern history, toys cast from iron were the most popular children’s playthings around. The quality and skill of the makers’ craftsmanship is evident in genuinely antique cast iron toys. Combined with the relative rarity of true originals, today these toys are some of the most sought-after collectors items at auction.

In this article, we’ll examine the history of cast iron toys, as well as their potential value, how to determine origin, and tips on effective cast iron toy maintenance.

The History of Cast Iron Toys

Iron casting is one of the most ancient forms of metallurgy, originating in China in the 5th century BCE where it was used to produce pots and other cookware. By the 15th century CE,  the art of pouring iron (or a stronger steel-iron alloy) into casts made of forging sand to mass-produce tools, weapons (such as cannons and cannon balls) and trinkets was introduced to Europe, and not long after, to the Americas.

In the 19th century, innovations in technology and the availability of fuel brought about the Industrial Revolution, and with it came an explosion in the manufacture of toys via the cast iron process (which were also America’s response to the popularity of more-expensive tin toys produced in Europe). These toys required just one original maker’s mold in order to be produced in the thousands. They were then painted, fitted with rubber accessories, and marketed to children around the world.

There were scores of high-quality cast iron toy manufacturers in the USA and further afield, but the most prominent makers of such antiques were:

Almost any type of toys could be produced from cast iron molds, their complexity and quality depending on the original design, the skill of the metal workers, and the level of quality checks carried out on end products. As has been the case throughout history, the most popular cast iron toys mimicked the machines and vehicles belonging to the parents of the children for whom the toys were gifts. As such, popular cast iron toys included:

When valuing cast iron toys, perhaps in preparation for a listing at Bertoia auctions or some other auction house, it’s absolutely crucial that you first determine whether or not your cast iron toys are actually vintage.

Unfortunately, due to the precious nature and rarity of genuine originals, modern reproductions are all too common. Let’s take a look at some of the easiest ways to identify the nature of those cast iron objects in your attic!

The original paint used to decorate genuinely vintage cast iron toys were rarely, if ever, sealed or protected by a varnish layer. As such, the paint would chip off over time through wear-and-tear, or even just whilst sitting in storage. Similarly, a patina – a thin, usually green film – tends to form on metal-worked objects over time.

As such, the paint on vintage cast iron toys should not appear glossy, nor is it likely to appear entirely without damage or flaking. Paint flaking from antiques will reveal a smooth under-surface, whilst paint flaked from reproductions will leave a rougher and pitted surface underneath.

Note: Tempting as it may be, painting over the original paint of an antique cast iron toy may reduce its value by over half.

At the height of cast iron toy production, between the late-1800s and 1950s, forging sand was of a higher, finer quality, meaning that the toys produced have much smoother surfaces when compared to modern reproductions.

When valuing your cast iron toy, run your fingers over every inch of its surface. If the toy was reproduced in new molds, based on an antique design, you should feel a granular quality to the metal. If the toy is legitimately old, it should be smooth throughout.

Whilst some antique cast iron manufacturers (such as Welker & Crosby and Dent) used screws to fix the two halves of their toys together, most manufacturers (like Hubley and Arcade) used heavy-duty steel pins instead.

Many reproducers of cast iron toys will, for sake of ease, today use Phillips head screws. If you find a Philips head screw affixing the two sides of your toy, you can safely assume it is probably a “fake”, or reproduction, since such screws weren’t invented until the ’30s.

The Value of Cast Iron Toys

Antique cast iron toys, especially those in mint condition, can be sold for eye-wateringly high prices at auction. The value of cast iron toys depends on several factors, but most importantly the rarity of the toy in question, and its condition.

To give a brief idea of just how valuable original cast iron toys can be, the largest ever sale was of the “Old Woman in the Shoe” mechanical cast iron bank, which sold at Bertoia for a whopping $426,000.

To best estimate the value of your cast iron toys, it’s worth giving them a preliminary condition status, according to the following guide:

There’s no exact price tag to put on a toy based on the condition alone, since the toy itself must then be assessed for rarity and desirability. However, it should be stated that the better the condition, the higher the price it shall fetch at auction.

Combined with condition, the rarity of the cast iron toy determines its potential value. Some types of toys are rarer than others, or at least deemed more desirable, for example yellow cabs, motorcycles complete with riders, or themed pieces based on cartoons and comics.

Here are some examples of valuable cast iron antique toys:

Typically, the types of toys which sell best are the older ones, or the ones modeled after particularly beloved vehicles, or vehicles and machines unrecognisable in today’s modern world. For example, horse and cart toys are perpetually desirable, as are “working” imitations of old industrial revolution-era machines, such as ditch-digger toys and the like.

Maintaining cast iron toys, especially genuine antique ones, is not always easy, especially if they’ve sat unloved or forgotten about for quite some time. Nevertheless, there are thankfully still things which you can do in order to keep them in the best condition possible.

Many genuine antique cast iron toys have been lost to history, which is partly what makes surviving originals so highly sought-after, and thus valuable, today. Make sure to check the authenticity of your cast iron toy if you plan to sell it at auction, and keep it in as close-to-mint condition as you can if you hope to score a high price. Lastly, if you have any questions for us, don’t forget to comment below.