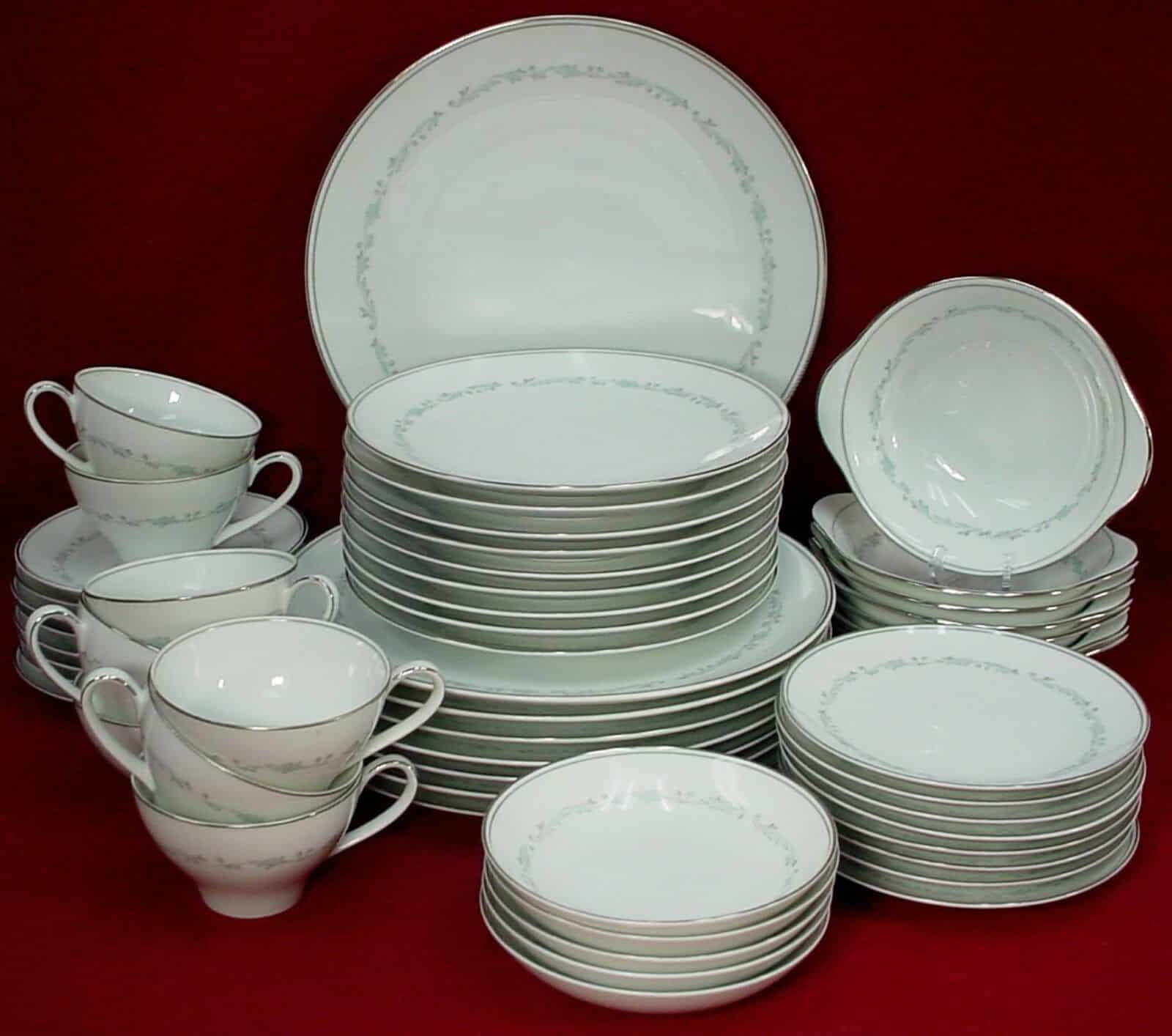 To most people, a dinner plate is nothing more than a dish to eat off of, and crystal stemware is just a glass to drink from. But the world of fine china offers much more than just utility to help us eat.

The artistry of fine tableware—delicate designs, exquisite patterns, and expert craftsmanship—make them a thing of beauty in and of themselves, adding to the aesthetics of dining rooms while enhancing the dining experience itself.

Here, we take a closer look at Noritake china—one of the leading names in antique china and tableware—and everything you need to know about its history, patterns, recognition, and value.

The history of Noritake goes back to the late 1800s, when the Morimura brothers from Japan began to establish business ties with American interests in New York City to export and trade Japanese-made goods.

Their company—then named Nippon—quickly expanded and soon began to de-emphasize the retail arm of their business to make the switch to begin selling wholesale.

By the turn of the century, virtually all the factories in Japan involved in the decoration of pottery and porcelain were located in Nagoya, the headquarters of Nippon.

In 1904, the company was established as making Japan’s finest china, and by 1914, they’d succeeded in infiltrating the Western markets with new and contemporary designs to compete with European porcelain companies.

After the World War, their successes continued to soar during the second half of the 20th century, and their early wares gained further reputation, beginning to be viewed as valuable collector’s items.

Interestingly, the company did not officially change its name to Noritake Company Ltd until the late 90s.

Today, most experts in antiques are in consensus that the “Nippon-era” porcelain, typically hand painted and carrying the original stamp issued by Noritake is some of the best and finest antique china to own.

Noritake continues to make china to this day, with their patterns found on dinnerware, pitchers, platters and much more. They’ve continued to design new and contemporary patterns and their products remain in high demand.

The precise number of patterns is difficult to pin down for this reason; however, the older and rarer designs continue to be the most sought after and highest valued Noritake china today.

You can refer to the Noritake Collector’s Guide for a comprehensive catalogue of antique Noritake china throughout the decades the company has been around.

Here, we take a look at some of the more notable design patterns most likely to attract collectors, be sold at auction, and instantly be identifiable as Nortek china.

Lusterware is an ancient technique of decoration that involves adding a metallic oxide over the base colour. This process essentially a “glaze” effect, creating a shimmering look of iridescence. Noritake lusterware is often orange (sometimes called peach) and blue, but can also be found in white and gold, as well as other colours appearing on teacups, saucers, vases, and bowls.

This lustrous design appealed to many during the Roaring Twenties and Great Depressions, making it an instant classic Noritake china pattern.

Another popular Noritake china pattern is Tree in Meadow. This pattern also goes by the name “House by the Lake”, and according to this collector’s guide, was originally named “Scenic”.

This makes sense as the pattern depicts a picturesque scene with a house next to a measure, tree, and calm lake.

It was produced in the early 20th century, and the pattern is found on sugar bowls, plates, jam jars, pitchers, and butter dishes amongst others. The Tree in Meadow Noritake china pattern is one the most recognizable, and thus valuable, for collectors today.

Azalea was, and continues to be, Noritake china’s most popular and prolific pattern.

It first appeared in the company’s catalogues around 1915 and is recognized for its simple gold and pink floral pattern on a white backdrop.

Azalea was sold exclusively through the Larkin Company from New York, allowing it to reach millions of customers worldwide they wouldn’t have otherwise had access to.

The Azalea was used for everything of china, teapots, soup sets, salad plates, and many more.

Despite being popular, Azalea is considered the most “classic” of Noritake’s patterns, with some of the rarest pieces and set extremely valuable.

The Noritake bulbous vase and pancake jug with the Azela pattern are two examples of items that continue to attract collectors from all over the world and drive up prices of authentic, undamaged Noritake china.

This classic Noritake china pattern—produced for nearly 90 years from 1906 to 1991—is sometimes called the “Christmas Ball” collection.

“Gold and White” is yet another name that aptly refers to this elegant design giving the china a lavish yet and gorgeous look.

The pattern featured raised gold enameling in a sweeping pattern with bulbous flowers against a white background. Despite the gold tracing and apparent luxury, Noritake’s Pattern 175 was attractive amongst the population because of its affordability. Designed for and fiercely popular amongst the middle class, many appreciated the look and feel of extravagance in their dinner plates without having to spend an arm and a leg for it.

Produced around 1920, this rare and valuable Noritake china pattern features an asymmetrical, geometric pattern of overlapping circles of various sizes. Typically, one large red circle dominates the pattern, surrounded by the softer colours of white, pastel blue and green, along with a yellow band.

The pattern was created by Frank Lloyd Wright during a collaboration with the Imperial House of Japan when he was commissioned to design the Imperial Hotel, including the dinnerware. The Imperial Hotel logo is at the top of the design in 18k hand-painted gold.

More than sixty years after the first commission, the Imperial Hotel and Noritake Company revitalized the pattern by resuming production for a short period of time.

How can you tell if Noritake china is real?

The best way to determine if Noritake china is real is by examining the back stamp left by the company on every piece of china they’ve produced. If your piece comes from one of the newer Noritake collections, it will definitely have the Noritake stamp along with the pattern name etched on the bottom of the product. However, there are over 400 known Noritake back-stamps with a variety of patterns, so it’s not always easy to exactly pin down the exact date of origin or value of every piece of Noritake china.

Having said that, the rarest and most valuable pieces of Noritake china typically are marked with one of three back-stamps you can look out for to ensure its age and authenticity:

The stamp includes the image of a tree. However, this was later changed to display spears—symbolizing the act of overcoming obstacles—and a circle, representing the peaceful resolution of conflict.

The letter “M” represented their namesake, Morimura—sometimes also referred to as the pattern name—and was used until World War II.

The stamp was registered in 1908 and had a series of circles with RC drawn on top and Noritake on the bottom. The stamp was designed in the style of art nouveau.

If on the other hand, your item contains a four-digit number, this is a reference to the pattern number and name used by the company.

Certain very rare pieces may not have a pattern at all, but since the Noritake company has a database of all the patterns it has produced since 1904, the four-digit number can be used to verify its authenticity.

What is Noritake china worth?

It’s important to remember that Noritake continues to make china to this day, with hundreds of affordable consumer options in the $60-100 range.

A wide array of their modern collections and prices can be found on their official website.

The value of antique pieces is a bit tricker. As with any antique, the specific value of the piece will be heavily dependent on the rarity, condition, quality, country of origin, and the ability to authenticate the item. The more is known about the origins (date, place of manufacture etc.) the higher an item can be valued.

Look out for age and rarity

One of the best ways to determine the age of Noritake china—and therefore how rare and valuable it is—is by examining the Noritake back stamps. We’ve already covered the three rarest and most valuable stamps to look out for.

In addition, the condition of the piece will play a factor. Noritake china without chips, cracks, or scratches, with unfaded patterns and clear back-stamps, typically will be valued higher. However, it is important to note, as with most antiques, rarity will often trump condition.

+ Lusterware pieces and sets can cost anywhere between $10 and $500 on eBay.

+ Tree in Meadow patterns can be found online for as cheap as $20, but rarer items like this candy jar can run upwards of $250.

+ For the Azalea pattern, single saucers could cost about $10, with the price skyrocketing to $1,500 for a child’s tea set, as listed here in Worth Point.

+ Pattern 157 follows a similar trend, with individuals auctioned on eBay for as little as $10-15, with the prices going into the hundreds on some sets.

If you’re looking to buy Nortiake china—whether antique or contemporary—chances are you’re in it for the beauty, glamour, and design, and not just for the money.

Modern technology and a century-long history of fine craftsmanship have made it possible for there to be a set of Noritake china in every dining room.

Whether your fascination is with the brilliant patterns, translucence, or high-quality, a Noritake china set is sure to meet and exceed your satisfaction.