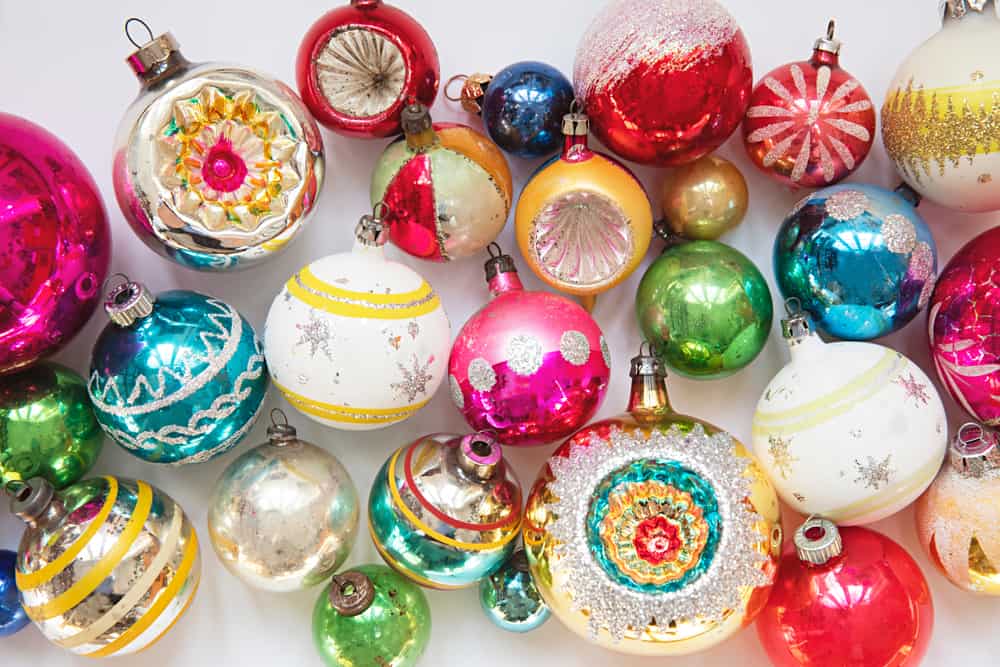 Most people love decorating the Christmas tree and see it as one of the best things about Christmas in general. If you’re one of such people, you have probably experimented with making your own Christmas ornaments because you don’t like the store-bought options.

DIY can be too time-consuming, but buying from a store is too boring. Fortunately, there’s the middle ground of buying antique Christmas ornaments which are full of personality without requiring you to do it yourself.

You could say that Christmas ornaments existed thousands of years prior to Christmas itself. Many groups of people and ancient civilizations like ancient Egyptians, Romans, Celts, and Vikings, celebrated festivals that might’ve been the base for Christmas as we know it today.

All those festivals were held about the same time called the winter solstice, which results in the longest night and shortest day of the year. Additionally, it’s also speculated that people would either bring an evergreen plant inside their homes or decorate their entrance with some greenery for the remainder of the winter.

Similar customs can be found in Christmas which these days is celebrated by many people all around the globe. However, Christians using Christmas trees for Christmas is a relatively new custom.

The first written record that mentions bringing a Christmas tree inside a church for Christmas dates back to 1539 when a Protestant pastor Martin Bucer ordered to place one inside the Cathedral of Strassburg.

The churchgoers adorned the tree, and it probably was the birth of the Christmas ornament tradition that has survived to this day. The glass ornaments followed soon after and the firsts were made in the second half of the 16th century in a form of garlands made of glass beads.

By the 19th century, Europeans were already mass-producing various glass ornaments for Christmas and even exporting them to the U.S. Now we can see what types of Christmas ornaments there are.

There isn’t some sort of “the Council of Christmas Ornaments” which has proposed official types of Christmas ornaments. As a result, look at the following types as rough categories for the sake of simplicity, instead of strict rules that every ornament must adhere to.

Most other antique and vintage Christmas ornaments are blown into a mold to help them achieve a specific shape. However there are also ornaments that were formed without using a mold, but relying on the so-called “free-blowing” technique.

This type of Christmas ornament can add character to every home during the Holiday season. Figural ornaments are basically small figurines with caps at the top of their heads that make it possible to hang them on the tree.

Ornaments like that usually took the shape of Santa Claus, fairytale characters, but also inanimate objects like pine cones.

This type of Christmas ornament was made using paper cutouts that were assembled in the shapes of various animals. Dresden paper animals were first made in 19th century Germany and got really popular in some parts of Europe.

However, ornaments like that are difficult to find today because, well, paper isn’t the most durable material. As a result, Dresden paper animal ornaments in mint condition can be some of the most valuable antique Christmas ornaments.

Besides the usual sphere shape, Kugels were also made in several different shapes, like a canopy of grapes. Regardless of the exact shape, all Kugels shared the fact that they were extremely heavy.

Most of the time, a Kugel Christmas ornament had to be hung from the ceiling instead of the tree itself because its weight could break off the branch it was hanging from.

The Second World War required a lot of resources, including those that were used in the production of Christmas ornaments. As a result, the U.S started manufacturing altered sphere ornaments that had paper or cardboard caps instead of the usual metal ones.

Before electricity-powered lighting was a common thing in most households, people used Christmas ornaments with indentations that could reflect the faint light coming from a candle and give some additional lighting to the home.

While such a unique design served a really practical purpose, indent & reflector ornaments came back in the second part of the 20th century when many people already had electricity. Such ornaments became popular once again just because they look great.

How Can You Identify an Antique Christmas Ornament?

Identifying a real authentic Christmas ornament from modern replicas can be slightly more difficult compared to some other antiques. It’s because most ornaments don’t have serial codes and aren’t included in databases that include every little bit of information about it.

That being said, there are several ways you can identify older Christmas ornaments from the newer:

As a result, the vast majority of old Christmas ornaments are likely to have damage that is visible with a naked eye. If you want to identify an ornament, simply inspect it in good lighting and try finding some scratches or discoloration that comes with decades of use or storage.

Contrarily, new Christmas ornaments can easily be in mint condition and lack a single scratch or another type of damage that could potentially devalue their worth as antiques.

Antique and vintage Christmas ornaments are almost always matte unless it was specifically designed to be reflective. On the other hand, modern ornaments have shiny surfaces which are indicating a more recent date of production.

Additionally, most antique Christmas ornaments that were made before the 20th century have plastered metal caps, while spring caps that are popular to this day were invented in the 20th century.

Because of that, you can have a rough estimate of when the antique ornament was manufactured. But keep in mind that these are just rules of thumb and should be used for making an educated guess and not a factual decision.

A blindfolded collector could easily identify real vintage ornaments from modern counterparts just by touch. These days the ornaments are made from hard plastic and other materials that make them smooth to touch.

The antique ornaments were made of many materials, including metals and mercury glass. The materials used back in the day didn’t result in a smooth surface, so older toys are almost always more likely to be rougher when touching.

If you’re thinking of buying a really expensive Christmas ornament, we would recommend you take the extra step and buy it only after you’re 100% sure that it’s authentic and antique.

To do so, you can either look for help from a local collector or an appraiser or use resources like online forums and books.

There are too many resources to mention, but probably the best book for correctly identifying Christmas ornaments is:

This book has over 2,000 color photographs and includes information like rarity rating, the name of the ornament, size variations if any, and so on. It even includes current collector value, but you shouldn’t trust it blindly, as the book was published back in 2003.

Are Vintage Christmas Ornaments Worth Anything?

You can find some vintage and even antique Christmas ornaments sold for just a couple of bucks. The price is especially low if you’re buying an entire lot of dozen or dozens of ornaments at once.

However, most antique individual Christmas ornaments lie somewhere in the $10-$30 range. It’s because such ornaments never really became a part of the culture in affluent social circles.

Compare it to other antique items, and you’ll see that the most expensive antique items are those that were specifically loved by people with more money. As a result, manufacturers would use more expensive materials to satisfy the expectations of a wealthier clientele.

This doesn’t apply to Christmas ornaments, as most people, regardless of their social status and wealth used pretty much the same ornaments.

However, it doesn’t mean that there aren’t some expensive antique Christmas ornaments that are being sold for much more than an average piece. There are 3 main factors determining the price:

While most antique Christmas ornaments aren’t popular among experienced antique collectors, the age of the piece still influences its value. In general, the older the ornament, the more expensive it’s going to be.

People aren’t drawn to things that can be found everywhere. That’s why rarity plays a huge role in influencing the value of antiques, including Christmas ornaments. Clearly, the rarer the ornament, the more expensive it’s going to be.

As people used them every holiday season, you’re going to have a hard time finding an antique ornament looking as new. That being said, the condition still influences the value of an ornament, and the better its condition is, the more money it’s likely to attract.

To get a better idea of what value antique Christmas ornaments can have, let’s take a look at some that were recently sold online:

You can get vintage free-blown ornaments for several bucks. This concrete example is around 2 inches big and was made in the 1960s.

Buying vintage Christmas ornaments one by one allows you to take full control of how you want your Christmas tree to look and can become a great hobby.

This red 8-inch Kugel has a circumference of 24 inches and weighs 985 grams, making it extremely heavy and not suitable for hanging on the Christmas tree itself. It’s one of those ornaments that have to be hung from the ceiling.

It was in excellent condition with some wear and tear and was sold for $1,000. You can find smaller Kugel Christmas ornaments for under $100. For example, this yellow 4.25-inch Kugel is listed for just $93.75.

This Christmas ornament is a 4-inch tall portrait of Red Riding Hood with glass eyes which makes it look pretty realistic. Also, unlike most other Christmas ornaments, this one is attached by a spring clip instead of being hung by the cap.

Finally, it was made in 1920, making it over 100 years old, which is a requirement for an item to be considered a real antique. All these features combined result in a price of $750 that it was bought for in 2022.

If you want a clip-on Christmas ornament but aren’t willing to spend hundreds of dollars for a single decoration, you can look into simpler designs like this 5 ½-inch glass bird. It was made in West Germany in the 1950s and sold for $40.

This 3.5-inch ornament was made in Germany sometime in the 1930s. As you might’ve noticed, this isn’t one of the usual Dresden paper animal ornaments made from cutouts. This was made using papier-mâché and features a devil motif.

However, if you’re interested in modern replicas of Dresden paper animal ornaments, a company called 32 Degrees North sells such handmade ornaments that were designed having the original Dresden designs in mind.