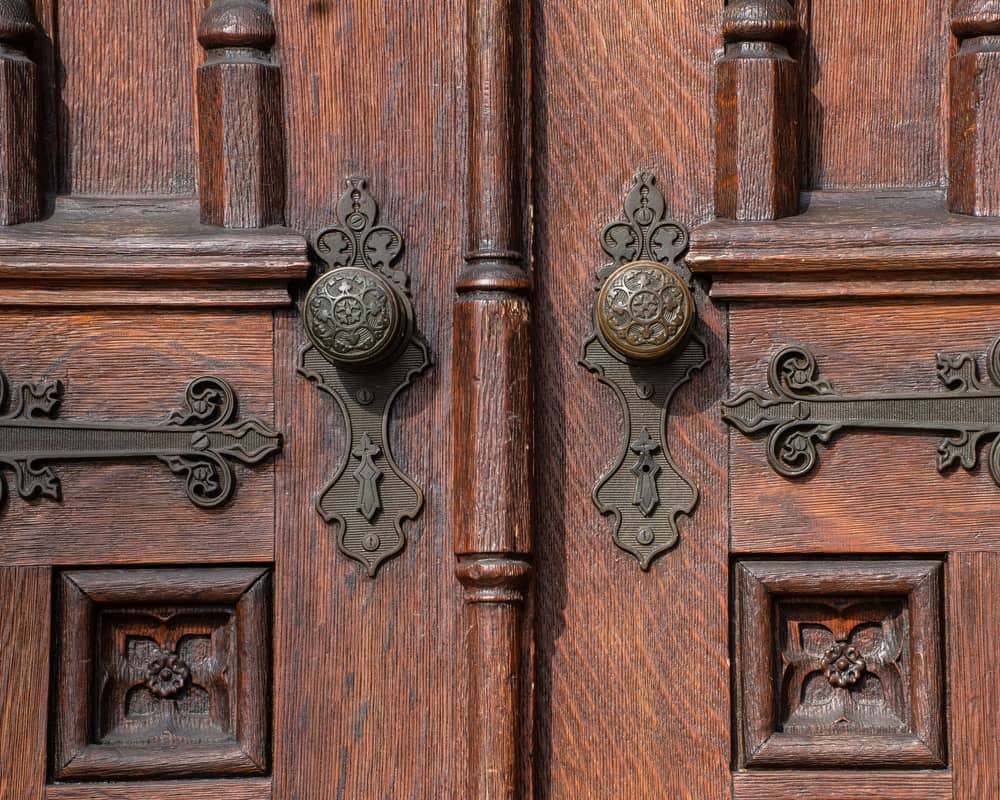 Many people have antique doorknobs in their houses, especially in buildings that are older and have been preserved throughout time. Some choose to buy antique doorknobs and fit them to modern doors to give them more character.

Doorknobs have a surprisingly diverse range of styles that are still available today, and many famous manufacturers have produced them. Below, I will go into more detail and teach you how to identify an antique doorknob.

There are a few manufacturers of antique doorknobs who found fame during the Victorian era and beyond. The Antique Doorknob Collectors of America provide some insight into the popular companies within the niche.

The first company was Russell and Erwin, a door hardware business that sold items such as door locks, padlocks, and door accessories. Antique doorknobs made by this company have sold for over £175.

They are an American-based company that began trading in 1849 under its present name, gained notoriety in the 1870s, and is still in business today. People collect doorknobs produced by the company as artifacts belonging to history.

Another famous manufacturer of antique doorknobs is Yale & Towne. It began as a lock business belonging to Linus Yale in 1868 and the addition of Henry Towne as a partner took the company from that to a prestigious hardware business.

Next, Sargent is another famous company that produced doorknobs that are still trading today. They began business in 1857 and made locks and other hardware associated with buildings and doors. They have had antique doorknobs and locks sell for over £200.

Finally, Corbin Russwin is a company that was established in 1849 that is famed for producing high-quality antique doorknobs. The company initially made and sold plate locks, before expanding its business to include other hardware.

According to Love to Know Antiques, there are four main types of antique doorknob styles. Doorknobs became an integral part of the internal design of a house during the 18th century. Over 100 doorknob patents were granted to inventors between 1830-1870.

These knobs were made out of a variety of materials. These include:

The more elaborate doorknobs weren’t made until the mid-late 19th century, so the characteristics of each type of doorknob vary depending on when they were made.

Doorknobs during this period were designed to be utilitarian rather than fashionable. This means that any doorknobs made during or before this were plain, simple, and made of heavy metals such as brass.

Doorknobs manufactured during the Victorian period were showy and elaborate, fitting in with the fashion of the time. They were considered to be a new commodity and only the richer people in society would buy them to decorate the doors in their houses.

Companies would use the more expensive and malleable materials such as porcelain, gold, amber, and crystal to craft pieces of art within the doorknob, using techniques like scalloping, etching, and painting to add detail.

Some doorknobs even had ornate filigree motifs decorating them and were made of multiple materials to give them an added refinement. Examples of Victorian doorknobs can be seen in a video here.

The doorknobs produced during this period were less pretentious than their Victorian predecessors. Fashion trends changed to become demure yet classy, and this translated over to home decoration.

Doorknobs were still made of expensive materials such as crystal, gold, and porcelain, but the level of detail was subtler, and the designs on them became more muted.

The advent of World War I signaled a rise in the popularity of glass knobs, mainly because all spare metal was given over to the war effort. Steel was too valuable to waste on making doorknobs.

These glass doorknobs were surprisingly sturdy, and some have survived relatively intact to be bought today.

How to Identify Antique Doorknobs

There are several ways you can identify whether your doorknob is an antique, as per Love to Know Antiques:

The Shape of the Doorknob

The shape of the doorknob will depend on the era it was made. Knobs made earlier than 1820 were small and round with a long metal rod attached to them. This was a rudimentary version of a lock called a mortise lock mechanism and allowed people to feel more secure.

Materials Used to Make the Doorknob

Doorknobs made between 1820 to the 1850s were usually made of pressed glass as that was the popular trend at the time. That gave way to cut glass doorknobs that lasted as a trend up until World War I.

Cast metal doorknobs were the easiest to make as the material became widely available to buy and use during the mid-1840s.

Doorknobs made of chinaware and porcelain were imported into the country during the 1850s and quickly became a trend amongst the upper-middle classes.

A new method for compression casting was invented in the 1870s, and this allowed people to have stamped metal doorknobs that matched the interior of their houses. These doorknobs also indicated the owner’s social status as they showed off their style.

Finally, wooden doorknobs weren’t common until around 1885, and their popularity lasted until the early 20th century. They could be engraved or painted to suit the owner’s personal taste.

Identify Whether the Doorknob was Intended for Commercial or Residential Use

Knowing what the doorknob’s intended purpose was will help you figure out whether it is genuine and what era it was made. If a knob was made for residential use, it would be more personalised with unique designs that reflect the owner’s style.

Residential doorknobs are also more likely to be made of expensive materials and have a higher level of detail, though it does depend on the period and what was in fashion at the time.

Commercial doorknobs, whilst still stately, are more likely to advertise the brand of a business and be more professional over personal. A good example of this can be seen at the St Nicholas Hotel, where the knobs have initials engraved on and a Celtic knot design.

The value of antique doorknobs varies depending on the style, era, condition, materials they are made from, and whether they are a popular commodity amongst collectors. However, generally speaking, antique doorknobs tend to sell for between £20-£200.

The most popular type of antique doorknob is those belonging to the Victorian era, simply because of their unique, elaborate designs. However, they are mostly sold as collector’s items rather than being repurposed to serve their original function.

Nowadays, the most common reason for anyone to purchase an antique doorknob is to add character to a modern home. When they are intended for this purpose, it is more likely that buyers will look for simpler designs.

Some doorknobs can be more expensive than £200, but this usually applies to either rare doorknobs made by famous manufacturers, or for commercial use and in very old historical buildings where the original architecture is maintained as closely as possible.

If you have a more ornate design, it may benefit from a professional appraisal to see if the raw materials used to make the doorknob are worth more than the doorknob itself, as you potentially could decide to remove the valuable aspects and refurbish it.

Otherwise, if you know which era it was made, what it is made of, who made it, and it is in very good condition, you can look at listings online for similar doorknobs and see how much they sold for to get a rough estimate.

In summary, to identify an antique doorknob, you can:

We hope you have found this article to be helpful in your journey to identify whether your doorknob is a genuine antique. If you have any questions about anything you have read today, please let us know and we will aim to get back to you as soon as we can!