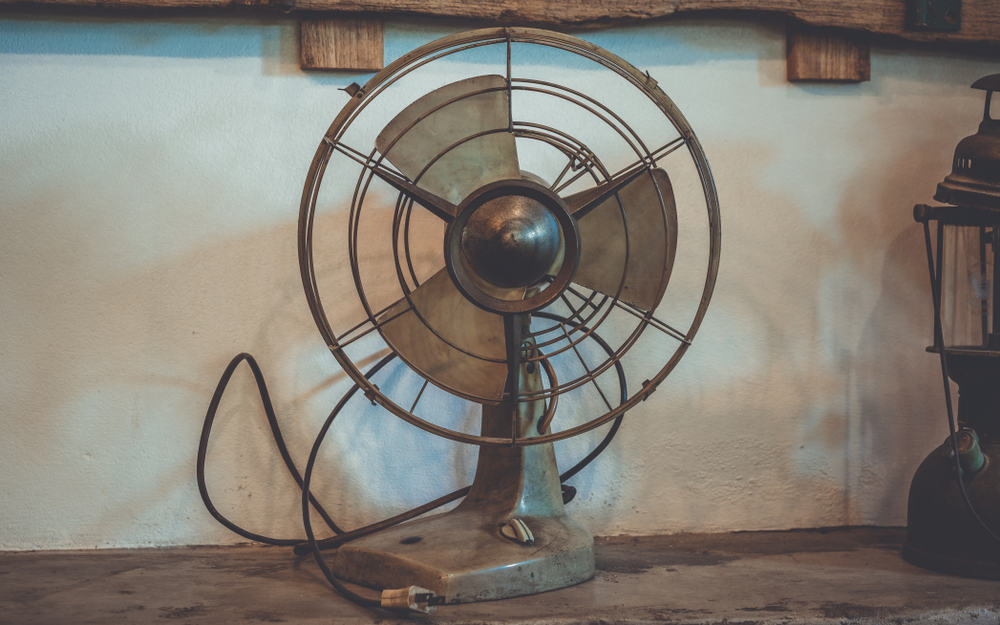 Antique electric fans are cheap but reliable, and they can add a touch of vintage charm to your environment. In this article, we’re going to tell you everything you need to know about antique electric fans, from their history and manufacturers, to how valuable are they.

The first electric fan was invented by American engineer Schuyler Wheeler in 1882. He called it a “buzz fan”, and it was basically a 2-bladed propeller mounted on an electric motor that powered it.

It took 3 years until the first desktop electric fan was introduced to the consumer market in 1885. While the first fans were heavy, unsafe, and not that effective, many engineers put effort into improving their designs and this piece of technology quickly improved.

Here’s a general timetable of the major changes in electric fan design through time:

There are literally hundreds of electric fan manufacturers that made their products decades or even centuries ago, which makes them antiques today. Here are some of the most renowned manufacturers and the popular electric fans they made:

Initially a toy company, it was founded in 1909 by inventor and professional magician Albert Carlton Gilbert, and his associate John Petrie. The company made some of the first commercial magic sets, including novelty objects required to perform magic tricks.

One of their most sold fans was called Trail Blazer. It was an 8” single-speed oscillating fan made by A.C. Gilbert in the early 1920s.

This company was founded by John Wesley Emerson in 1890. He was a Civil War veteran who used an electric motor patent by Charles and Alexander Meston to manufacture the motors, and electric fans utilizing those motors.

It was the first company in the U.S. to mass-produce electric fans and quickly became one of the biggest companies in the country. Today, it’s a Fortune 500 company with over 85,000 employees and 170 manufacturing plants.

Emerson Electric has developed dozens of different electric fan models, like Emerson 27666 which was made from 1919 to 1912. It was a 12-inch fan featuring 6 blades instead of 4, which was unusual at the time.

This and subsequent fans with 6 blades were much quieter than their usual 4-blade counterparts because more blades allowed the fan to spin slower. Because of that, it was very popular in hotels, hospitals, and churches.

It was founded in 1892 by no other than Thomas Edison and his business partners Charles A. Coffin and J. P. Morgan. General Electric manufactured all sorts of electric items and appliances, including electric fans.

The company introduced many technological advancements in the electric fan industry and was one of the leaders, selling hundreds of thousands of electric fans during decades in the business. It’s still an active company but sold its appliance division in 2016.

One of the most popular electric fans by General Electric was model 55X165, which featured an overlapping blade design that was patented by the company.

This 8-inch fan was revolutionary and all other companies followed suit in making their own fans with overlapping blades.

How to Identify an Antique Electric Fan?

Correctly identifying antique electric fans might be a difficult task, because these antiques don’t have that much of a following these days. Many models aren’t documented precisely, and there aren’t many useful reference resources.

However, the vast majority of electric fans made in the 20th century have a maker’s mark attached somewhere to the surface of the fan. It’s usually a badge or some sort of metal or ceramic plate displaying vital information about the fan. It can also be embossed or printed.

It usually shows what company made it, when the fan was produced, and its serial number. Sometimes there’s also a model name included. Knowing this information, you can start your search online, by Googling all the information displayed on the maker’s mark.

You can also bring it to a local antique shop and talk to the expert there. Even if they aren’t well versed in antique electric fans, they might help you out in identifying what kind of fan you have, or at the very least, whether it’s an antique piece.

How Much Is My Antique Electric Fan Worth?

Old electric fans aren’t incredibly valuable antiques, and the price of the majority falls somewhere in the $100-$250 range. However, you could find one for as little as $50, or pay over $1000 for a valuable model. So, what factors influence the value of an antique fan?

There’s a rule of thumb that applies to nearly every type of antique, including electric fans; the older the piece, the more likely it’s valuable. Electric fans made before the 20th century are often the most prized, as not many have survived to this day.

Contrarily, electric fans made after 1922 aren’t as valuable, because they aren’t considered antique yet. There’s an unofficial agreement between antique collectors that an item has to be at least 100 years old to be considered antique.

As with most antiques, the condition of the piece is one of the most influencing factors determining its value. It’s incredibly difficult to find electric fans from the late 1800s that are in excellent condition, and those are valued a lot.

The more scratches, dents, and cracks a fan has, the less it’s going to be worth. If two fans are exactly the same, including the year of production and the model, the one with less damage is almost always going to be worth much more.

As electric fans were available to most people, they aren’t considered a luxury item, and antique fans usually aren’t purchased to be displayed in antique collections. People usually buy them to use, not to collect or display.

As a result, fans in working order are valued more than those which need repairs and restoration. Keep in mind that you should always change the wires of antique fans before using them, even if they’re working properly.

Now we can take a look at a couple of antique electric fans that were sold in 2022, so you get an idea of how much a fan can be worth: 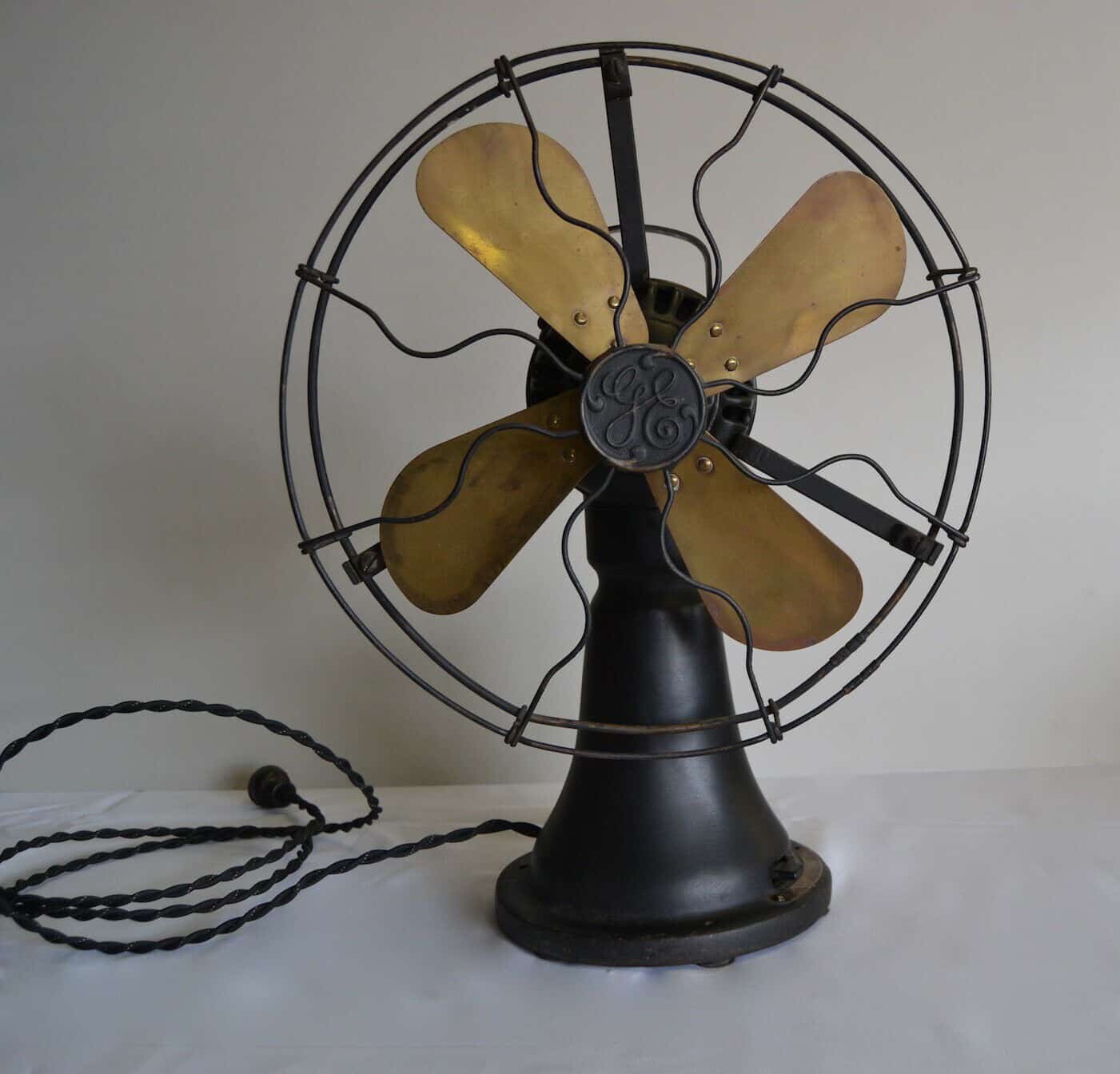 This 18-inch tall fan has a 9-inch deep cage with a 13-inch diameter. Despite not being one of the oldest fans, it sold for $2,950 on eBay. It’s still an antique fan made in 1920 and has a good condition with little signs of use or damage.

However, the reason why it sold for so much is that it’s coin-operated. If you insert a nickel, it’s going to spin for a couple of hours before stopping. Such a unique feature makes this fan much more valuable than its usual counterparts. 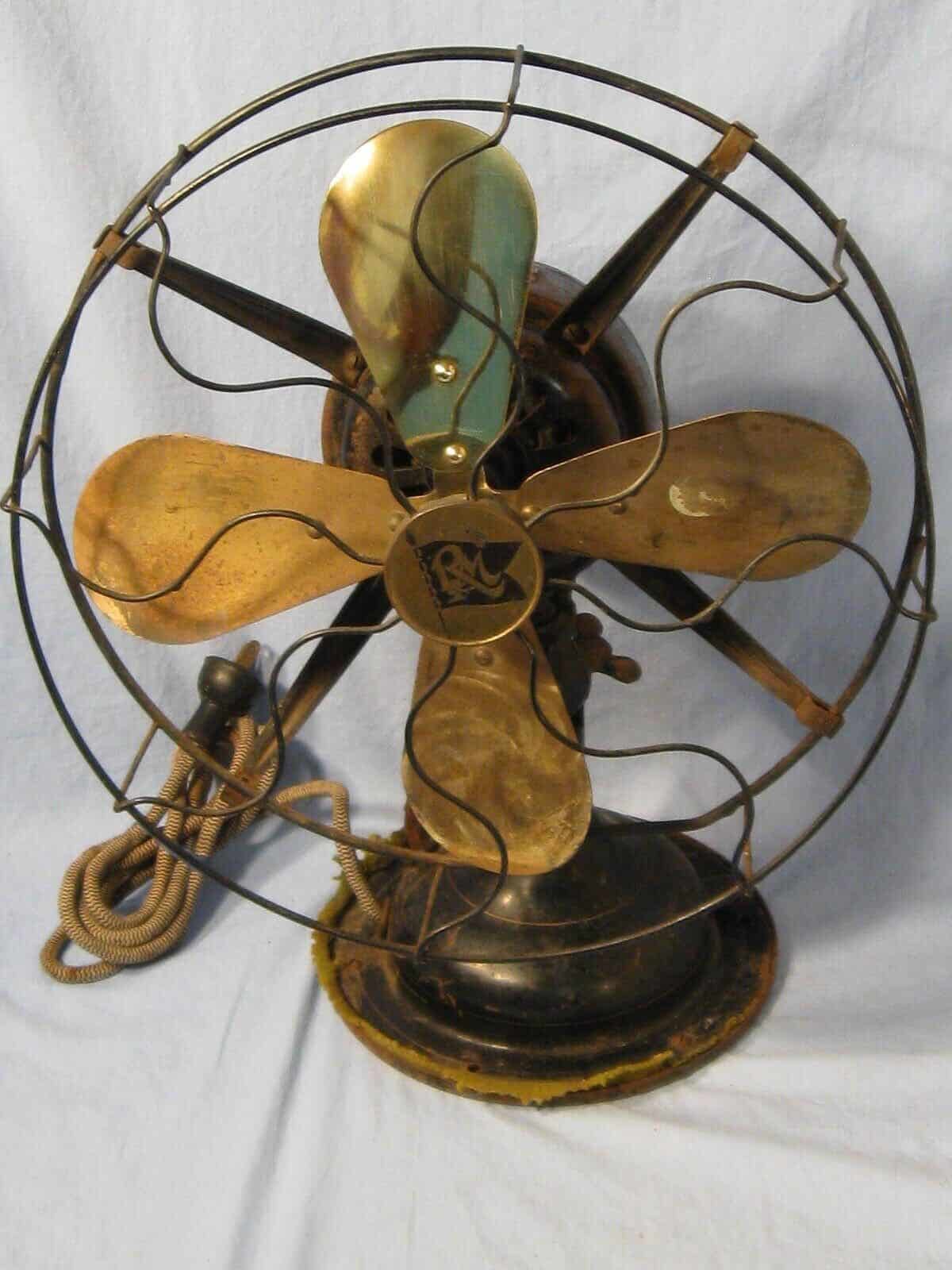 This 17-inch tall fan has 3 blades in its 12-inch diameter. It had minimal damage like paint loss, and the seller didn’t include its production date, although Robbins & Myers 2410 model was made around 1920.

Additionally, this fan is oscillating and features three-speed modes, but it still sold for just $106, showing that even old and fully functional antique electric fans aren’t that valuable.

How to Clean Antique Electric Fans?

If you have an antique electric fan, you should clean it before turning it on. An old fan can be incredibly dirty, and you don’t want it spinning with all the filth inside just to spread it across your room.

Here are the steps you should follow to clean your antique electric fan:

That’s it, your antique electric fan should be as clean as it comes!

If you’re interested in adding some spirit to your room, look no further than into acquiring an antique electric fan. Not only they are some of the finest items carrying the spirit of vintage design, but they’re also functional!

We hope this article helped you take the first step into the world of antique electric fans.