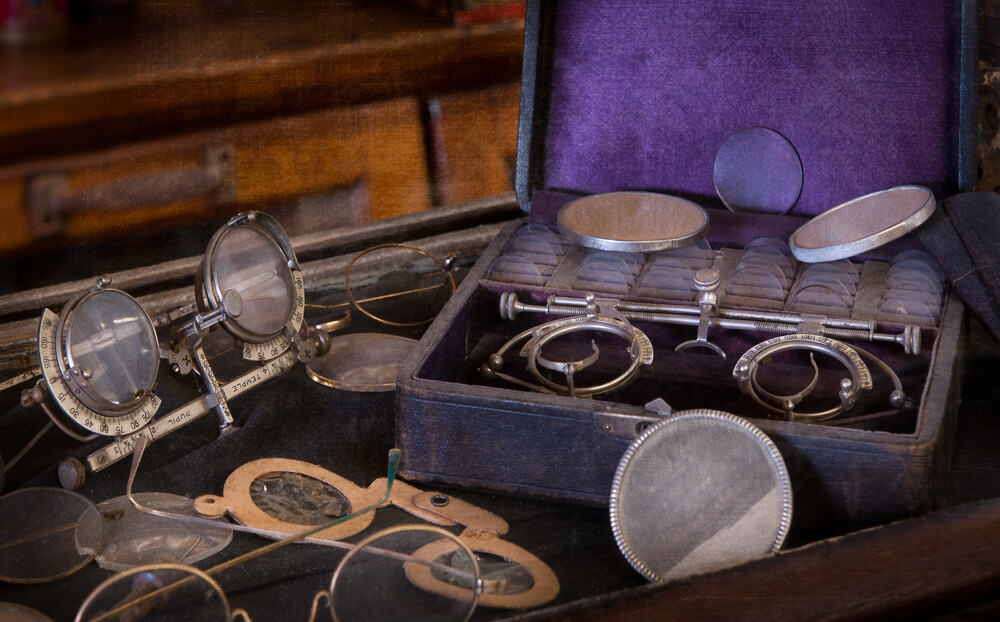 Have you been given some old eyeglasses by a relative or friend that you don’t know much about?  Have you been in your attic or garage and found some glasses during a bout of spring cleaning that you think could be antique?

People make all sorts of valuable discoveries about belongings they either forgot they had or were given once they know what to look for. I have a keen interest in antiques and was very excited to research this subject to see what I could find.

Eyeglasses are classed as antique when they reach 100+ years from the time they were made. So, in order for a pair of your own to be antique, they must have been made no later than 1922. Vintage eyeglasses would have been made between 1923 and 2002.

The first recorded mass production of eyeglasses took place between the 14th and 15th centuries in Italy. They existed as a tool to improve eyesight before this, but they were not made as a product to be bought commercially until then.

Germany quickly joined the market as a leading provider of eyeglasses and the next two centuries saw a partnership between Italy and Germany to make the best quality glasses for that time period.

A lens could be made of many different materials including quartz, pebble, and glass. Frames were made of either gold, silver, brass, tortoiseshell, or steel.

Though they are now defunct thanks to advances in ophthalmic technology, antique eyeglasses are still in demand by collectors, antique shops, people with a passion for antique oddities, and fashion historians.

The type of antique eyeglasses you have will depend on the era they were made. Anything made earlier than the 16th century is unlikely to still be in a condition that is recognisable and will be extremely rare.

This video of replica eyeglasses will show you the different types you may have, though they only mimic the style and are not actually antique. It also covers different types of vintage eyewear.

Below is a list of different types of antique eyeglasses you are most likely to find:

These were a rudimentary form of eyeglasses consisting of basic circular lenses and a rivet to secure them to the bridge of the nose. They were made of leather or wood. Later on, they were known as Pince-nez Spectacles.

Made in the 16th and 17th centuries, Nuremberg spectacles featured round lenses and a raised u-shaped bridge. They were named after the city of Nuremberg in Germany.

Extremely popular in the 17th century, these eyeglasses had a small unique coloured lens that protected the wearer’s eyes from harsh light.

These 17th-century eyeglasses were the first to be made with two ‘arms’, exactly like the design of the glasses people wear today. They had oval lenses and a wire frame.

These spectacles were similar to the Temple Spectacles with one key difference; they had four arms instead of two for extra security. They were first invented in 1752 but failed to catch on.

Four Lens Spectacles were invented during the late 17th century. The first prototype had two lenses on hinges on top of the existing ones to be flipped down when the prescription needed to be stronger. The second prototype had the same design, but the hinges allowed the lenses to rotate sideways.

Bifocals were introduced in the 18th Century and were famously worn by American President Benjamin Franklin.

Made in the 19th century, these eyeglasses are most similar to 21st-century spectacles as they use the same pin mechanism in the arms to attach them to the frames and lenses.

How to Identify if your Eyeglasses are Antique

So, now that we’ve covered the history and type of eyeglasses you should look out for, how can you tell if you have a pair of genuine antique spectacles?

According to the website ourpasttimes.com, you can identify antique eyeglasses in the following ways:

Use Reference Books and Online Resources

Online resources do much the same but can be more accessible. However, a drawback to using this method over a published book is that online publications may not be as trustworthy due to how easy it is for anyone to post anything on the internet.

These resources should list the different manufacturers from each era, the styles you should be looking for, materials that were likely to be used, and any hallmarks that make them stand out from reproductions.

A local library should have the texts you require without needing to purchase them, or alternatively look at the website handle to check how genuine it is and how likely it is that the information on the site is reputable.

Carefully Clean the Eyeglasses and Look for Markings

As mentioned above, antique eyeglasses usually feature some form of unique marking or hallmark exclusive to the manufacturer, style, or era.

Markings include information such as the manufacturer name, a maker’s mark, the country they were made, and sometimes the type of material that was used e.g., gold content.

Antique eyeglasses can be rather dirty or even damaged through the ravages of time. It is important to note that any attempt to clean them should be carried out carefully and with gentle materials such as a soft, clean polishing cloth.

Once your spectacles are clean, take a magnifying glass and a torch and look closely at them to see if there are any markings. They will usually be on the inside of the frame, located on the temple pieces, but may be located on the handle/handles.

Focus on the Style and Material

If the marks are unclear or there is not any present, then you will have to rely on the style and materials used to make the eyeglasses.

Look closely at the style of the frames (e.g., cat eye, round, square, oval) and whether they’re made of wire steel, tortoiseshell, leather, or precious metals. Do they have handles, loops, or anything else unique?

Use the aforementioned reference books or online resources to cross check your findings. If you are still unsure, take them to an antique dealer or a historian for a more accurate assessment.

Are Old Glasses Worth Anything?

The value of antique eyeglasses can depend more on their popularity among collectors and dealers rather than their age. Of course, the condition of the spectacles also factors into any valuation made.

Once you have established that the eyewear you have is a genuine article, dealers will look for whether they can be adapted to be used in the modern day – i.e., if prescription lenses could be inserted without damaging the glasses.

They will also be looking at what materials they are made of, as spectacles made from solid gold will naturally be worth a lot more than ones made from simple steel wire or silver. Seeing antique spectacles worn by celebrities will also boost popularity.

A final factor in determining value will be where and by who they were made. Hallmarked spectacles will be popular with collectors in particular and they may be willing to pay a higher price than a dealer would if the pair is rare or missing from their collection.

According to antique blogger Nadja Maril, the value of antique eyeglasses that are made from pewter and silver from the 18th to 19th century is between $40-$80. Eyewear equally as old but made from 14K gold can go for $400+, as evidenced in the blog post.

In summary, to identify antique eyeglasses, you should follow these steps:

I hope you have found this article useful in your quest to identify your antique eyeglasses. Hopefully, you have a pair that is rich not only in value but in history too. Please leave any questions or remarks you may have in the comments below. We look forward to reading them!