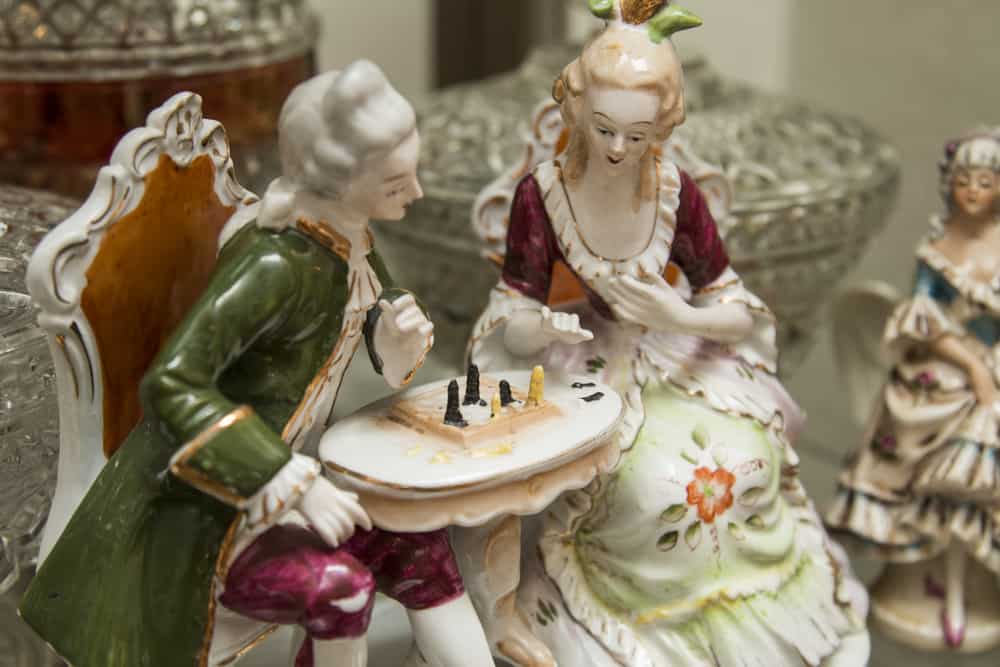 If you’re looking to raise some funds and you know there are a few vintage and potentially collectible figures in your home, it’s a good idea to see if they are valuable. Or, maybe you’re looking to buy some nice antiques as a gift – then too it’s wise to make sure what you’re getting is worth its price.

Types of Antique Figurines Worth Money

The Royal Nymphenburg has been creating gorgeous porcelain creations for centuries, ever since the 1700s. They are often associated with their stunning plates, bowls, cups, vases, and other such items, all adorned with nature- or mythology-inspired themes. According to Kovels, Royal Nymphenburg has some of the earliest porcelain designs out there.

However, Royal Nymphenburg also has a wide variety of amazing porcelain figurines that often sell for thousands of dollars if not over $10,000. Some of Royal Nymphenburg’s antique figurines have even been estimated and sold for well over $100,000.

The Lalique factory was built in 1921 by Rene Lalique. This makes the brand barely over a century old but a lot of their vases and figurines are considered antiques – quite valuable ones too, thanks to Lalique’s exquisite craftsmanship. Most of Lalique’s motifs have to do with flora and fauna as well as the feminine beauty.

Sèvres porcelain is famous for its unique designs and delicate decorations, albeit mostly used for dinnerware such as plates, cups, bowls, as well as tea sets, vases, chandeliers, and others. There are some very rare and highly valued Sèvres figurines out there, however, and that rarity only boosts their prices to even more astronomical levels.

Take a look at this White Biscuit Porcelain Group, for example, selling “just” for over a thousand dollars, or this French 19th Century Louis XVI St. Biscuit De Sèvres Porcelain Centerpiece being sold for over $6,000. This Bust of Murillo is also a very good example having been sold for $17,640.

Dresden lace figurines are among the most sought-after on the figurine market because of their unique and delicate designs. Often made with a porcelain lace and tulle, the Dresden figurines almost look like they are moving in front of our very eyes.

The figurines were made through a very unique method too – real lace and tulle were dipped in porcelain slip and were then attached to the body of the figurine. Only then were they heated, solidifying the porcelain while burning the fabric itself away.

With such an awesome crafting method and beautiful result, it’s no surprise that Dresden figurines also often sell for thousands of dollars.

Coming from Valencia, Spain, Lladró began working in 1953 – fairly recently compared to some of the other craftsmen on this list. Founded by three brothers, Lladró initially started producing stuff such as vases and jugs but eventually moved to sculptures and figurines a few years later after realizing that there’s more than enough market for people of their skill.

And, indeed, the three brothers’ craftsmanship means that their figurines sell today for anywhere between several hundred dollars, such as this Matte White Lladró Hercules Beetle Figurine up to multiple thousands of dollars like this Limited Edition Lladró Lord Balaji Sculpture.

If you’ve heard about M. J. Hummel figurines before, you may be surprised to see them here. After all, don’t Hummel figurines sell for like $10 or $20 tops? Yes and no. It is true that Hummel has many “ordinary” and mass-produced figurines that are very affordable.

However, Hummel also has numerous awesome and very high-value figurines you can find or sell online. For example, take a look at this Merry Wanderer piece, selling on the Hummel gifts site for $1,700. This is a very famous design as it’s been sold for north of $20,000 too. For another example, here is a Frisky Friends figurine selling for close to $2,000.

This Italian porcelain company is very famous for its perfectly-crafted porcelain dishware, chandeliers, and other household items, typically adorned with gorgeous historic or flora and fauna motifs. They also make fantastic figurines, however, and they have been making them almost since the company’s creation in 1743.

Usually white or ivory and with a shiny glaze, Capodimonte’s figurines also started getting colored in bright and fantastical colors later in the company’s life. Today, it’s not at all uncommon to find antique Capodimonte figurines bought and sold for hundreds and thousands of dollars such as this Capodimonte group of a couple, circa 1755-60.

Fine china as well bone china figurines of various artists and popular brands can cost very impressive sums of money just on the virtue of being beautiful and made out of fine china instead of porcelain.

Check out this Retired Royal Crown Derby Fine English Bone China Seal Figurine or Paperweight as an example. It’s not particularly old or unique but it is quite captivating and being made out of bone china bumps its price to over $150.

Meissen was established all the way back in 1710, making it the grandfather of many more modern porcelain craftsmen and brands. This gives early Meissen figurines the benefit of not only being stunningly beautiful and perfectly crafted but also truly antique as they are centuries old.

So, it should come as little surprise that prominent auction houses such as Christie’s not only value early Meissen incredibly highly but also report selling some of Meissen’s earlier works for over $200,000. For reference, much of Meissen’s newer work is also fantastic and valuable such as this Meissen Figurine of Two Praire Foxes going for over $2,000 and this Meissen Sculpture of a Horse priced at $2,700.

Figurine sculpting has been one of the most iconic arts throughout ancient China’s history. Needless to say, a genuinely antique Chinese figurine today can be worth a lot of money, especially if it is well-preserved and beautiful.

Of course, a lot of the “antique Chinese figurines” sold today aren’t really antique but are modern reproductions in the art style of traditional Chinese figurines and sculptures. Those too can be worth quite a lot, especially when they are well-crafted and/or are from a famous manufacturer. For example, look at these “antique” wooden Chinese figurines from the 1980s that sell for over $1,000.

Established in 1735, Doccia porcelain continues to produce art to this day, only under a different name – Richard Ginori. In 2011, Doccia/Ginori set a record for the most expensive figurine ever sold at over 650,000 British pounds. The porcelain Hercules figurine was made in the mid-18th century and remains one of the most infamous art pieces to this day.

More modern Doccia or Ginori pieces continue to sell very highly too with most breaking into the 4- or 5-digit range easily such as this Doccia White Porcelain Caryatid Sculpture.

For something a bit more affordable but still very valuable, let’s talk about Precious Moments figurines. Made in a different and often simpler style, these figurines are often not only adorable but very highly-priced too. New ones are still being made and sold but you can also find older figurines sold on sites such as Etsy or eBay for up to several hundred dollars at times.

This English ceramic company specializes in tableware and ceramic household items but they also have a long and extensive history of creating awesome collectible figurines. Royal Doulton never really reached Meissen’s or Llardo’s levels but you can still find many of their pieces selling for several hundred or several thousand dollars.

Check out this Royal Doulton Porcelain Figurine, “The Mendicant” with a price tag of over $400, for example, as well as this Royal Doulton Reynard 1950s Fox Coffee Service Printed & Hand Painted Bone China figurine selling for over $2,500.

The Second World War was brutal for Japan in various ways as it was for those attacked by the Far Eastern country. If we are to look for some beauty that came out of all that chaos, however, we’ll quickly discover the awesomeness of “Occupied Japan” figurines.

Created in the years between 1945 and 1952 when Japan was occupied by the Allies (mostly by the US), many Japanese craftsmen made a living producing sculptures, figurines, and other porcelain and fine china art. This art form not only helped Japan get back on its feet economically but became endlessly fascinating for collectors and the subject of many books, studies, and even YouTube videos.

How do you know if a figurine is valuable?

Discovering the true value of your figurines is a fairly straightforward process once you know what to look for. There really are only a few factors that dictate the relative value of an antique figurine, so, here’s a quick figurine price guide:

What’s the best place to sell your old figurines or to buy ones yourself?

The easiest way to find a buyer for the antique figurines worth money in your home is through sites such as eBay, Etsy, and others. Or, you can try more specialized sites such as 1st Dibs or Sothebys. It’s quite common for figurines to sell there not just for a few dozen but for hundreds of dollars and above.

The big benefit of this method is just how easy and quick it is, although getting the highest possible price can sometimes be tricky. Vice versa, if you want to buy an antique figurine but you’re looking for the most favorable price, you might also have to look a bit more. Not to mention that there are risks in shopping online and you should always make sure there is a return option in place.

Another thing to look into is physical retailers of antiques. Whether brick and mortar stores or at flea markets, it’s usually pretty easy to find sellers for quality antique figurines that way. Again, however, the issue here is that you may need to spend a lot of time looking if you want to get the best possible price.

On the other hand, if you want to buy an antique figurine from a retailer or at the flea market, it will be difficult to find a favorable price as most sellers will know what they are selling.

Going to an auction, be it physical or online, is another good option, especially if you know what you have is very valuable. The two main benefits of this method are that you’ll get the whole sale done for you by quality professionals and that they will almost certainly get you the best possible price.

The drawbacks of auctions, however, are that they take time and that the auctioneer always gets their cut too. So, while they’ll maximize the profits from the sale, that’s largely negated by the – usually 2-digit – percentage they get for themselves.

Antique figurines worth money are not at all uncommon. It’s quite often that people get surprised by the gold mine that’s been sitting on their living room shelf for years. Sadly, it’s also quite common for people to throw away antique figurines in the trash or sell them for cheap at garage sales, not realizing what they are giving up.

If you don’t want to make that mistake, make sure that you always check exactly what your antique figurine is and how much it’s worth today. In many cases, you’ll not only find out that you can make a lot of money out of it but you may also reach the smart conclusion that holding on to the figurine is even more profitable in the long run.