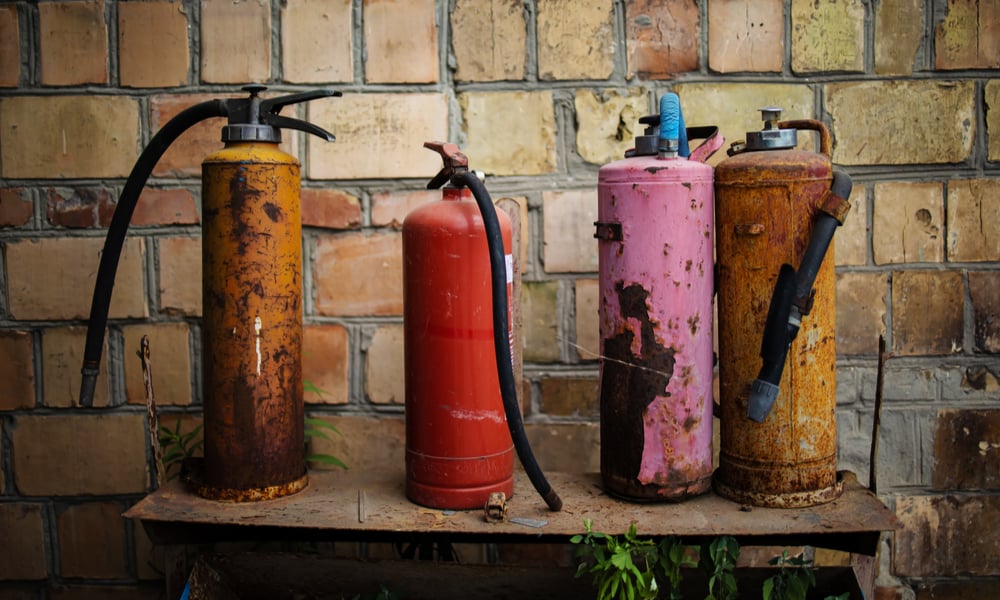 An antique fire extinguisher is a reminder of an age when decoration and function were equally important. Each piece made a century ago was beautiful and elegant, but not practical and safe like modern models.

This simple device officially appeared in 1816 and was a huge step forward compared to buckets with water or sand, teardrops filled with saltwater, and powder tubes. Collectors like pieces with embossed labels and decorative gold, red, and blue decals. 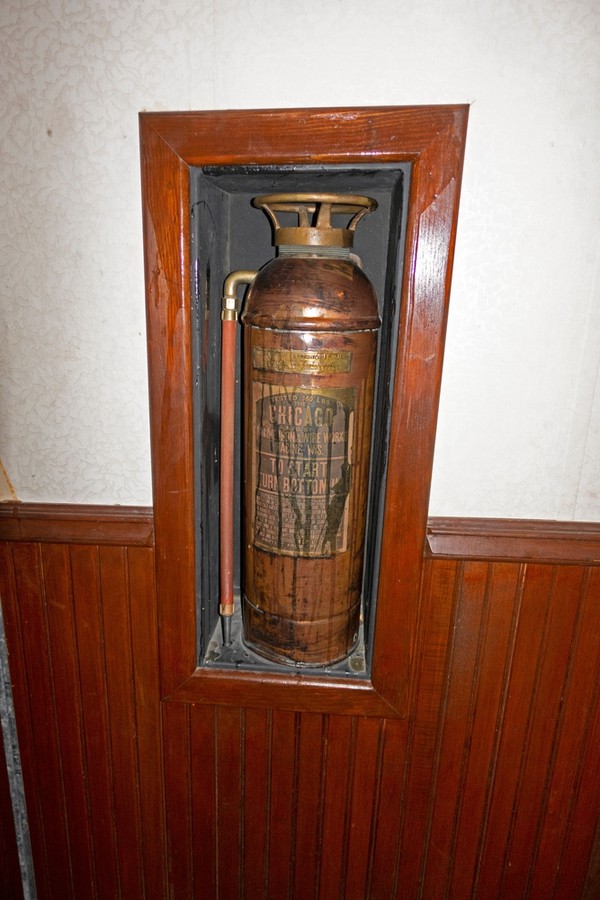 The first extinguishers appeared in the 1700s after chemist Ambrose Godfrey patented his fire extinguisher in 1723. It was a cask filled with fire-extinguishing liquid.

A pewter chamber of gunpowder placed inside was connected with fuses. The system implied exploding the gunpowder after igniting the gunpowder and scattering the solution over the flame. Unfortunately, Godfrey’s invention was unsuccessful and was abandoned after a few years.

Almon M. Granger patented a cylindrical fire extinguisher with a soda-acid in 1881. It used the reaction between Sulphur acid and sodium bicarbonate to spray water under pressure.

Read & Campbell invented the cartridge-operated extinguisher the same year. A few years later, they introduced PETROLEX, a carbon tetrachloride device for automotive use.

In 1905, Russian scientist Alexander Laurant invented a chemical foam extinguisher and used it against the burning naphtha in his pan. Five years later, the Pyrene Manufacturing Company filed a patent for an extinguisher using CTC (carbon tetrachloride), and the first small portable extinguisher appeared in 1911. 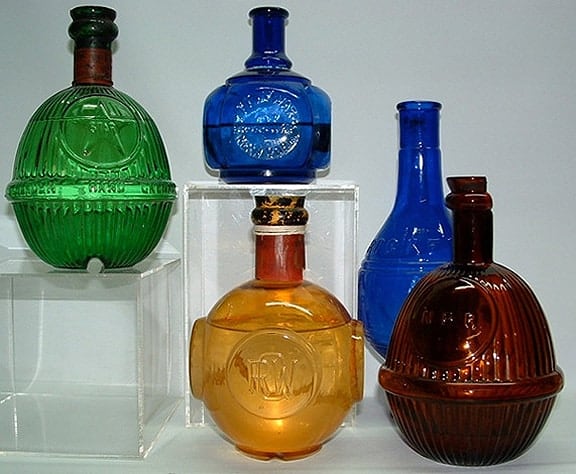 People used these at-home fire extinguishers made of glass in the 19th and early-20th centuries to save their houses from a possible fire. It was an irreplaceable model before the pressurized canisters’ invention.

Grenades were filled with salt water initially, but future manufacturers used carbon tetrachloride as a filling. Then, they sealed these rounded multi-colored bottles with a cork and cement.

The goal was to throw them away into the fire and help extinguish the flame. Since most pieces were used or broken during the years, there are not too many well-preserved grenades on the antique market.

Their price is typically evaluated at $50 to $250, but one collector paid almost $300 for a sealed set of Nutting Fire Grenades at auction. 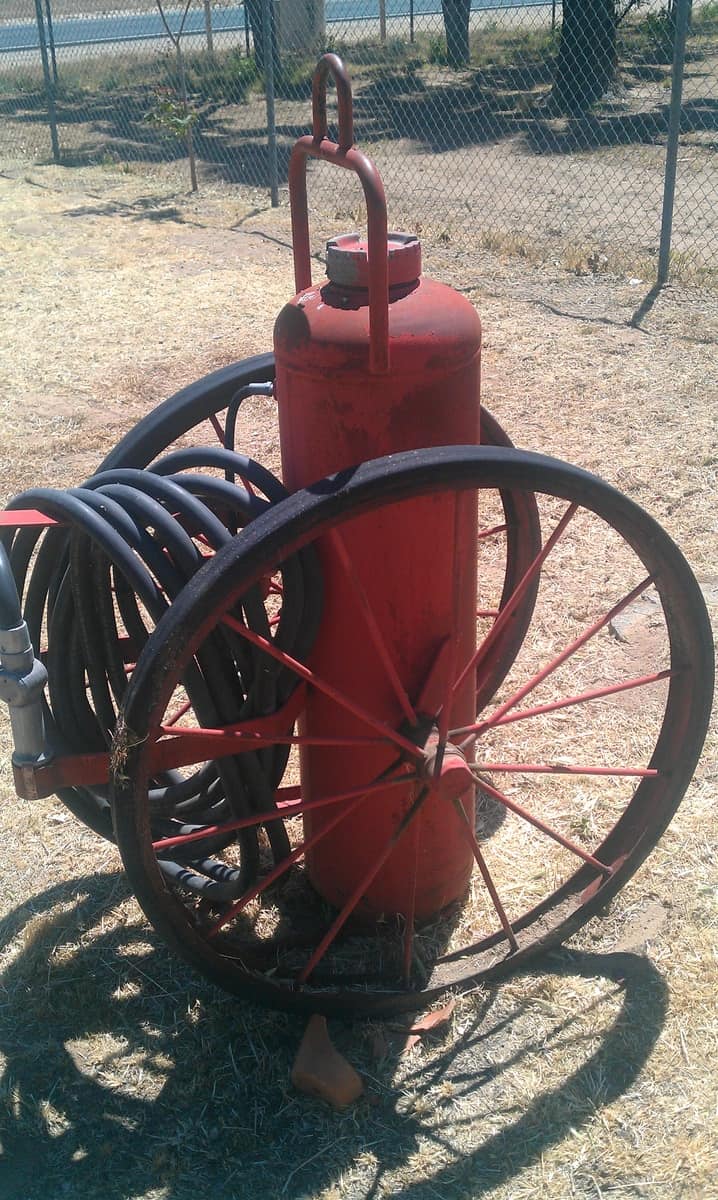 These antique fire extinguishers were practical. Wheels allowed a fast response to fire in a period when distant fire squads often came to the scene in a few hours.

Meanwhile, people used these mobile extinguishers to keep the fire under control, while a firing squad came with pumps to put out the flame.

Even though these devices are pretty rare, they are rarely highly collectible nowadays because of their size. However, collectors with space for such a piece need to set aside more money than for average copper fire extinguishers.

For instance, you can occasionally see these devices at auctions. One produced in the 1930s was listed for $1,600, but the owner needs to wait for another chance for successful trading.

After Francois Carlier patented the first fire extinguishers filled with soda acid in 1886, these devices became widespread, particularly in the early 20th century. Their cases made of copper or brass contained a water sodium bicarbonate solution mixed with tartaric acid.

The fantastic thing is that you can polish these extinguishers’ casings to a high gloss, making them highly collectible. On average, this antique unrestored soda acid fire extinguisher costs $100 to $200.

On the other hand, owners often sell used devices or those in poor condition for approximately half the estimated value. For instance, collectors are prepared to pay $300 for well-preserved brass fire extinguishers at auctions but won’t set aside more than $70 for those with visible signs of wear.

Nowadays, you can typically find fire extinguishers from the 1900s at a reasonable price, but sometimes early designs from the 1800s appear on the market. Since antique pieces feature casings made of copper and brass, well-preserved ones can be pricey.

Standard antique fire extinguisher identification is uncomplicated, particularly when they come with out-of-practice or bizarre designs. Experts typically recognize a few types, helping you to determine their value.

Antique fire extinguishers are classified into five well-defined classes, depending on their condition, age, and origin.

You can put only rare antique extinguishers in class A, while most pieces from the 1900s and retro designs require a broader group. Be aware that fire extinguishers created during the 1800s don’t fit any specific class.

Finding the original markings is helpful since they help in tracking the brand and crucial details.

You can recognize three different antique fire extinguisher versions, affecting their overall price on the market.

This item was a direct predecessor of the first fire extinguishers produced from the 1870s to the early 1900s. These bottles filled with chemical agents replaced leather buckets filled with water and were intended to keep house fires under control. They are rare nowadays, making them highly collectible.

These sizable fire extinguisher versions looked like early fire trucks. The model was equipped with a hand-operated pump and fought fires by forcing water through a hose.

Finally, the cylindrical design occurred, but antique versions were noticeably taller than later models. They could restrain small-scale fire but weren’t efficient enough.

Antique fire extinguishers came with different extinguishing agents over time. Even though some were effective, most contained harmful by-products forbidden these days.

After decades of experimenting, experts divided fire extinguishers into five groups. Their extinguishing agents efficiently helped with specific fire classes so that you can recognize models filled with:

Proper valuation is crucial when you plan to trade all antique products, including fire extinguishers. Every piece’s price will depend on a few factors, such as:

Production year significantly affects antique fire extinguishers’ professional valuation, and well-preserved older models will be worth more and vice versa. There is one more thing! Be aware that the extinguishing agent and cylinder material depend on the devices’ age, and these features can help you evaluate.

Antique fire extinguishers with a beautiful and original look and new will be more costly. On the other hand, you should expect discolored, faded, and damaged devices to be less valuable. Always check the extinguishing mechanism and whether the piece you want to buy is empty.

Be careful with the cylinder since the one with holes, cracks, or missing pieces can be dangerous. Plus, be careful while manipulating an antique fire extinguisher since these devices react to pressure. In the worst case, you may face an accident due to dangerous chemical leftovers inside the casing.

Even though the most collectible is devices in perfect condition, most collectors find minimal rust and bend acceptable. As always, unprofessional repair and restoration will reduce the value.

Only rare collectors make collections of antique fire extinguishers for display. In most cases, buyers plan to repurpose them.

Therefore, bigger models are desirable because you can use them as shelves or mini bars, for example. The best option is to have a plan before picking out a suitable device.

Remember that collecting is both a pleasure and business, so market demand will significantly affect the price of antique fire extinguishers. Rare, unique, and beautiful devices will be expensive, but some extraordinary pieces won’t be collectible for various reasons.

For instance, too sizable models are hard to sell despite their quality. Once you decide to start your collection or sell a fire extinguisher you have, it is crucial to be aware of the situation in the current market. You should count on expensive restoration if you plan to buy a model in poor condition.

Be careful when looking for antique fire extinguishers to avoid injuries and wounds caused by chemicals:

Antique fire extinguishers were cylindrical-shaped items filled with specific chemical agents. People used them to put out the fire and keep it under control.

The first models appeared in the 1700s, but a British captain made the modern devices’ foundation with his EXTINCTEUR in 1816. They weren’t reliable like modern versions, but they had a role in history.