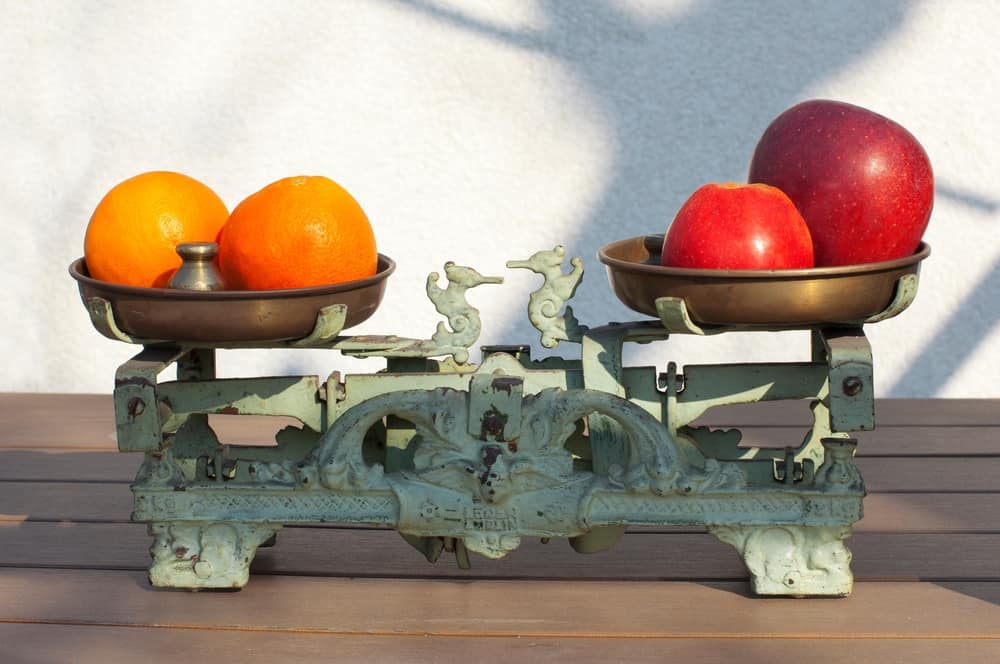 Scales are with us since the dawn of civilization. Great ancient empires used them to weigh coins and spices.

They changed significantly as technology advanced in different fields.

Today, we have extremely accurate digital scales that are perfectly adequate for their purpose but lack the beauty and elegance of the old scales.

There are many different types of scales, but in this article, we will focus on food scales, how they became a part of our kitchen utensils, what their current value is, and what we can do to get the most out of them.

The History of the Food Scale

Scales are the result of necessity. Merchants needed a way to assess the value of the goods they were going to sell as trade developed in ancient civilizations.

The origins of balances are a source of debate. The oldest balances, dating back to around 2000 BC, were discovered in the Indus River Valley near present-day Pakistan.

However, scales with similar dates have been discovered in Egypt. Those early balances were made up of two plates suspended from a beam. The product was placed on one plate of the scale, and the weight was placed on another until the plates were balanced.

That is also why balance is a symbol of justice and equity throughout history.

Until the Industrial Revolution, there was no technological advancement in the balance. Only at the end of the 18th-century scales that did not require the use of a counterweight as a basis for measuring objects were invented.

In 1838, Richard Salter, a British balance and scale manufacturer, invented the spring balance.

This type of scale uses the pressure exerted on a spring to calculate the weight of an object. Spring scales are still quite common today.

Most antique scales for measuring food use this type of technology, but due to their high precision, electronic scales have taken their place in our daily lives.

Modern balances can not only measure the weight of objects but also the humidity of materials, and density of liquids, and detect microscopic variations.

Scales have come a long way from Ancient Egypt and the Roman Empire to the present day.

Scales have come a long way to reach the digital age, and although they did not undergo major changes for a long time, they were made for various materials and purposes but the most common one is the metal scale.

This is the most fundamental and primitive balance, also known as an equal-arm balance.

It is made up of three components: the fulcrum, the beam, and the pointer. A beam is suspended at its exact center by a blade-edged hinge at a right angle to the beam.

Equidistant from the fulcrum are two plates of equal size and weight.

The pointer is positioned at a right angle to the beam and is responsible for indicating which side is heavier or equal.

These scales existed for centuries and only changed in size and minor modifications for different purposes.

Grain weighing has special scales for this input. The principle is the same as that of beam balances, but instead of having plates at the ends, they have large metal cylinders.

Christof Weigel was a German who invented a new scale mechanism in 1698. This was a significant invention because, while other types of scales existed for different materials and purposes, they all followed the same principles.

These balances are made up of a cylinder into which a spring is inserted, and the weight is determined by the spring’s deformation.

A pointer measures the degree of deformation, which is then installed on a scale to determine the weight of the object.

Some of these scales have a plate or platform on top of the cylinder, and the weight is determined by how much the spring is compressed. Other models place the weight on the bottom with a hook and a plate. As a result, the spring deforms by stretching.

These scales were very popular; they were simpler models that were used as modern kitchen utensils to improve recipe precision.

The only flaw in this design is that it cannot maintain its accuracy indefinitely. The spring will eventually wear out, and it is always necessary to replace it and re-calibrate the balance.

Older models had an elastic metal strap with a spoon-shaped depression at the top. Because the eggs were weighed one by one, these scales were inefficient.

Then, scales that could weigh multiple eggs at once were developed. Even though their design was not the most appealing on the market, they were of a very specific technical singularity.

Other Types of Scales

Although they are not scales used to weigh groceries, they are perfect to decorate your living room or to sell in online auctions and antique stores.

If you’re looking for the most valuable scales on the antique market, postal scales are a popular choice among collectors.

Stamps were first used on letters and packages sent through the mail in the mid-nineteenth century.

The weight of the envelope determined the cost of sending each of these packages.

For this purpose, all types of scales were used, including classic scales with saucers at the ends, spring scales, and pendulum scales.

By the 18th century, very precise scales capable of measuring very small quantities of materials were being used.

Doctors and pharmacists frequently used these scales. We must remember that at the time, pharmacies did not stock all of the products that could be purchased and taken home.

Pharmacists were required to prepare medicine on their premises and had to have exact measurements.

The pans of these balances are usually made of brass or glass, and the central beam is very delicate and fine.

The scale builders had to make a great effort to reduce the friction of the hinges because they needed the greatest precision for these objects.

These beautiful scales were kept in glass boxes because of their sensitivity. Dust or humidity affects its accuracy immediately.

These scales were popular in the early nineteenth century. It was necessary to invent special balances to o weigh paper or textiles.

The weight per square unit is calculated using these materials.

They were small and portable objects because everyone who worked with paper or textiles had to move them. They were essential tools for determining product quality.

Although vintage scales are no longer in use, they are still highly valued as decorative objects or are often ideal for restoration projects.

They were also designed to last a long time, and you can repair and calibrate them if you want to keep them functional.

If you are considering purchasing one of these antique scales, we recommend that you conduct a thorough and extensive search because market values are not equal and many people offer them for very high prices that exceed their true value.

Before purchasing one of these items in any auction, we recommend that you consult with an antique expert.

However, if you do not want to wait for an expert’s opinion or simply do not want to pay for advice and plan to take the risk, we recommend that you look at scales that have already been sold rather than those that are for sale.

Remember that people can ask for whatever amount they want, but that does not reflect the value of the item, only the individual’s appreciation.

If you look at the prices of the scales that have been sold, you are more likely to find prices that are in line with the market.

These items are not only available online or in antique stores, but you’re also likely to find a real discovery at garage sales, flea markets, or thrift stores.

Scales can be purchased for around $50. However, some extremely rare and old samples can fetch $400 or $500. Some scales can cost thousands of dollars, but these are the exception and are difficult to come by on the market.

We will leave a list of scales here so that you can get an idea of the prices and use it as a reference when purchasing.

How to Restore Antique Food Scales?

Scales are very simple objects for a makeover and wonderful as a DIY project. Most will present rust and dirt due to the passage of time. This is easily fixed by polishing them.

After removing all the oxide and dirt, you just have to paint them with a color that goes according to the place where you plan to put them as a decorative object.

If you also want to use it, you just have to check if they are still well-calibrated or not. Remember that they were objects made to last a lifetime, so it is very likely that they will continue to work until now.

You can test them by putting a package of rice or noodles in and making sure it weighs what it says. If the weight is not the same, simply send it to be repaired and calibrated again, which is a simple task for any technician who is familiar with these objects.

Food scales are timeless objects that will never go out of style. You can use them exclusively as decorative accessories, or restore them as functional objects in your kitchen, adding a vintage touch of elegance.

Antique kitchen scales are treasures that you can easily find in any antique shop or on focused websites advertising.

Always remember to consult a reputable source of information before making any purchase and to be well informed to make a favorable and fair purchase.