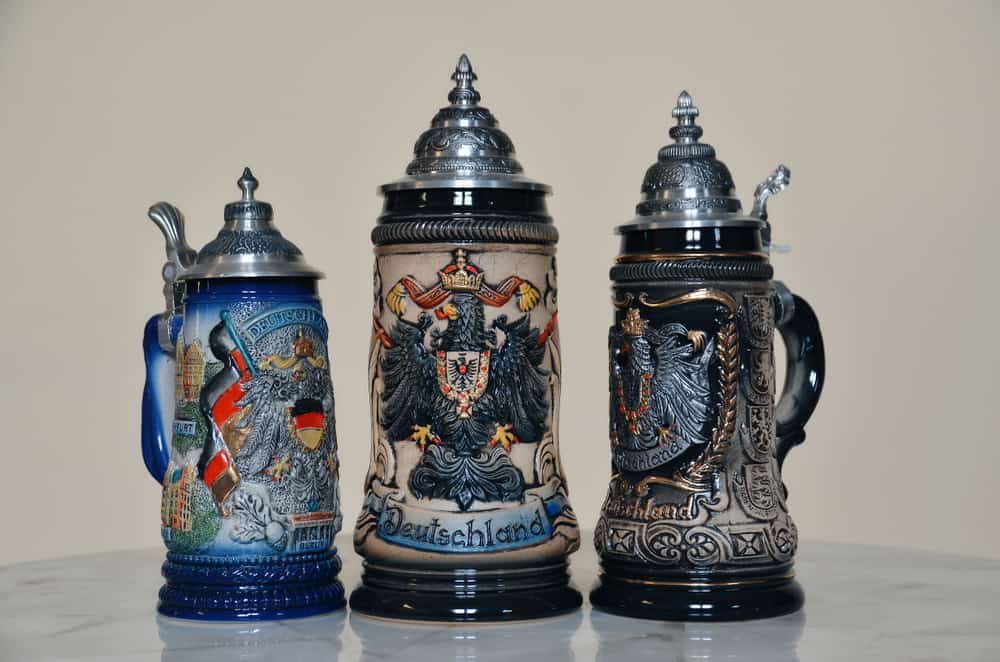 The German Beer Stein is a mug designed for drinking beer. This mug dates back hundreds of years, and it’s precious.

However, recognizing an authentic German beer stein is not easy, especially today with the numerous replicas available.

Read on to learn more about the history of German beer steins and the markings on the mugs you can use to identify their value.

The first German beer steins date back to the 14th century after an outbreak of the bubonic plague and fly invasion in Europe.

Germany enforced laws that required all food and beverage containers to have lids to mitigate the situation. A heightened awareness of the need for hygiene led to all vessels, including tankards and beer steins, having a pewter lid.

For about 300 years, the German beer stein was made from clay and had a pewter lid. Later, the mug, not just the lid, was made of pewter.

The history of the German beer stein has seen several materials, including stone glass, porcelain, and silver, used in place to make the mugs.

And although stein production increased rapidly in the 1850s, World War I caused tremendous limitations in accessing the raw materials used to make the mugs.

Fortunately, production resumed after 1918, although most people had stopped using the mug. As a result, the production never hit the initial high level.

Modern materials and technology have made it possible to advance beer steins production. Several companies are producing beautiful pieces today, albeit primarily as souvenirs.

The beauty of the German beer steins lies in the diversity of decorating styles. They reflect the ancient artisans’ skill and imagination. It explains why steins remain valuable and highly sought after to date.

What Do the Markings on the Bottom of Beer Steins Mean?

The best beer steins have easily-recognizable markings on the bottom.

Although most of these marks indicate the country of origin, “Germany” or “Made in Germany,” some manufacturers have tried to be unique. That’s why you can find different markings on an antique stein.

Note that the markings are not just empty signs. They mean something. Below is a list of some of the marks and their meaning:

A handmade beer stein will always have some design flaws. For example, it might have paint flecks or coloring outside the lines.

Interestingly, while these flaws might have been not so admirable at the time, they make the piece more valuable today.

The Westerwald Handmade steins with cobalt blue sides and a pewter lid are the best proof, which still sought after today. Remember, it’s a handmade limited-edition mug whose value will likely increase over time.

Germany introduced fixed lids to keep flies off their beer and mitigate the spread of bubonic plague in the mid-1300s. So, a beer stein with a paler inner surface and a working hinge on the lid is highly valuable.

This type of German beer stein marking has a ‘P’ on the outside bottom surface, meaning it is a prototype piece. It’s preowned and thus may have some imperfections.

Although it develops some yellow with age, it’s an attractive mug.

This stein is an example of old German mugs with decorations.

In particular, the marking includes a lady dressed in pink serving patrons at a beer garden. The beer mug has a green ridged handle.

The German beer stein markings under this stein identify the piece as made in Germany and originating from lot 444.

Soldiers were awarded beer steins to mark their bravery. The pieces had a mark featuring the soldier’s name and rank.

These regimental steins are hand-painted. The lid is well carved, and the bottom is marked with the german word Geshultz.

How Do I Identify Old German Beer Steins?

Identifying a valuable old German beer stein marking is a process. However, it’s not hard if you understand how to go about it.

1. Check for the Country of Origin

Authentic old German beer steins have a country-of-origin mark at the bottom. The mark was introduced after the amendment of exportation rules in the late 1800s.

Typically, the steins have a “Made in Germany” or “Germany” mark. Sometimes you will come across a mug with a “Gemacht in Deutschland” mark.

But that is not to say that a German beer stein with no country-of-origin mark is fake. On the contrary, the mug might be old and thus more valuable.

2. Assess the Condition of the Lid

The lid is a crucial feature when determining whether or not a beer stein is valuable.

An old valuable German beer stein’s cover comprises a soft silvery material. It makes the lid lighter on the inside than the outside. Such a lid is usually of significant value.

At the same time, with continued exposure to air, the lid darkens, making the inside of the lid appear even lighter.

But be wary of counterfeit steins whose makers use darkening agents to make the mug appear older.

It’s worth noting that valuable steins have metal lids made with a single metal, while fake ones often have covers made of varying materials.

So it’s crucial to scrutinize the beer stein.

Although older high-value German steins are hand-painted, it can get confusing. Artists are hand-painting the newer steins making it hard to tell the difference.

But there’s something else you can look for to help you tell the difference. A distinctive characteristic of old steins is their imperfections. And usually, you can quickly identify markings and signs of a job not perfectly done.

So if you come across an almost flawless hand-painted German beer stein, it’s likely machine-made, thus, a newer piece.

An older highly-priced German stein also has paintings of mythical characters like angels, deities, and heroes.

4. Look for Decorative Shapes and Figures

Valuable German steins also feature decorations of paintings and figures all over the mug. These complement the stein and contribute to its uniqueness.

And again, these illustrations are full of meaning. They tell a story with scenes featuring:

5. Handles Should be Bump-Free

Manufacturers started putting bumps on stein handles in the 1920s. So unlike the modern steins with bumps or grooves, old valuable ones have no dents.

6. Check Out the Materials Used

There’s no doubt production of beer steins has evolved over the years. So, it’s easy to spot differences between the new mugs and their older counterparts.

What makes older German stein mugs more valuable is the materials used to make them.

Manufacturers of these older steins used silver, glass, and ivory, materials that made the mug heavy.

Identifying valuable German beer steins is easy if you understand authentic markings and other identification parameters. The country-of-origin mark is essential, although older pieces may not have it.

You want to look at the beer stein lid’s condition, hand-made paintings or portraits on the mug, ridges on the handle, and the material used to make the German beer stein. As for determining the value of a stein, it’s advisable to seek help from a professional such as a seasoned collector.