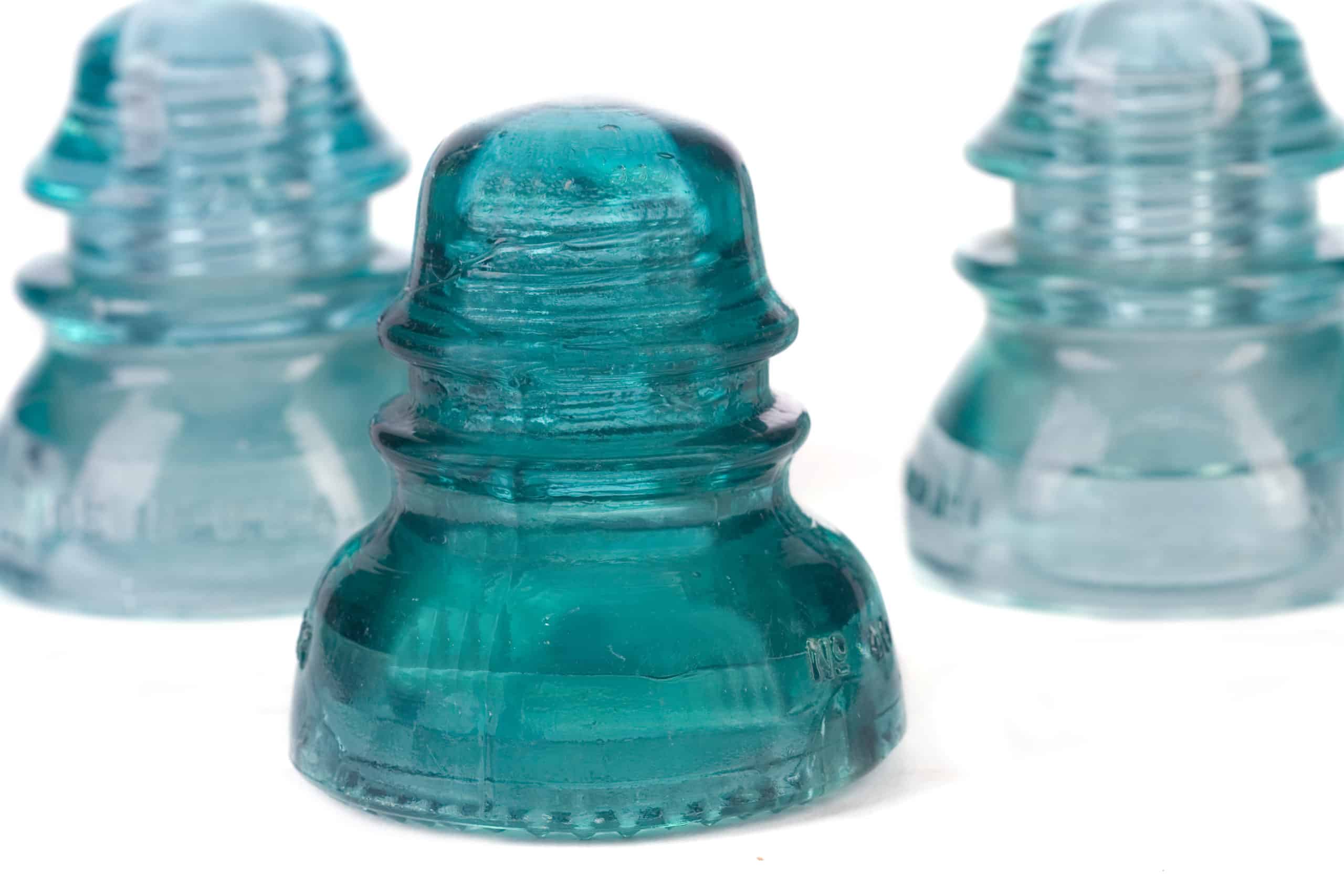 Collected for their unmistakable beauty and historical significance, antique glass insulators come in an endless supply of shapes, sizes and colors.

Many collectors repurpose antique glass insulators into everything from garden lamps and succulent planters; others simply display them as they are on walls and in the artwork.

But a growing number of insulator collectors recognize their increasing value. And with many sporting unique branding and trademarks, rare insulators can fetch a small fortune at an auction.

Despite their decorative appearance by today’s standards, glass insulators had a very important function throughout history.

When Samuel Morse invented the electric telegraph in 1846, glass insulators were developed to connect telegraph wires to wooden poles and prevent current loss during transmissions.

Glass insulators were much cheaper and easier to make than their rival porcelain insulators. Because they were mass-produced, this lead to a lot of variety in their designs across America.

However, from the 1960s, communication technology became more sophisticated. Large numbers of telephone wires were dismantled, with glass insulators discarded.

In time, a surge of interest in these otherwise forgotten antique glass insulators happened – and nowadays many collectors hunting for different varieties in the wild, and across online auction sites.

How do you date an old insulator?

Dating a vintage glass insulator is a very easy thing to do. There’s an identification system known as Consolidated Design, i.e. ‘CD number’.These numbers describe the insulator’s shape and profile.

CD numbers are useful ways of groping glass insulators together into categories. But it’s important to note that they leave out specifics like embossing, markings, base styles and color.

How do I identify old glass insulators?

Whilst CD numbers are an effective way of groping insulators together, their categories don’t tell the full story. To properly identify your glass insulator, consider the following criteria:

What is the value of old glass insulators?

Whether you just have one insulator or an entire collection, you’re no doubt curious about how much they’re worth.

How high can glass insulators sell for?

The range in value of glass insulators is vast – some are worth pennies to a couple of dollars, whilst others can easily sell for thousands of dollars.

On eBay, you can see that a variety of commonly found insulators still manage to sell high into the hundreds, and thousands.

Using one of the most common insulator types, here’s a quick price guide on what you can expect at auction:

What affects the value of a glass insulator?

As you can see from our price guide, color is one of the major influences on how rare an insulator is and its price.

The more common a color, the less valuable an insulator is to potential buyers. The most common ones found are clear, green and aquamarine.

Rarer colors such as bright red, yellow and olive, fetch a higher price. Some insulators have ‘imperfections’, or a mix of colours which can attract huge interest because of their rare, random appearance.

Like any collectable, if an insulator is damaged, it will be worthless. As glass insulators were historically very cheap to make and were mass-produced for several years, they did not go through intense quality control at production.

‘Mint’ or ‘near mint condition insulators will usually fetch a much higher price.

Older insulators are more valuable than newer ones. The closer you can date your glass to the 1840s, the more it is worth.

Likewise, anything from the 1930s (when insulators were beginning to become obsolete) reduces its value significantly.

A quick look at the most expensive glass insulator shows this clearly:

Style ultimately depends on an individual buyer’s taste – but some are more popular than others. Styles like the ‘Mickey Mouse’ Hemingray have very intricate and eye-catching designs and will usually attract more attention at auctions.

That’s not to say classic, ‘recognisable’ styles are worthless. Take for example the most common Hemingray-42,  which can still fetch up to $80 at auction if it’s in good condition.

Did you know there were hundreds of different insulator manufacturers? And each company had its very own unique branding. Some manufacturers fetch a higher price because of this.

The Hemingray Glass company is perhaps the most recognizable manufacturer on the market. Their insulators all bear the markings ‘HEMINGRAY”, and “H.G.CO.”

Although insulators were often mass-produced to keep up with demand in the telegraph lines, some models are surprisingly rare – and thus incredibly valuable.

For example, despite being produced relatively late, only 13 models of the CD-141 Twiggs Insulator were made, making them incredibly rare and valuable.

Because of their global historical significance, many collectors buy insulators from different countries around the world. Each country had a unique style and are themselves highly collectable.

The National Insulator Association has a gallery full of insulators from around the world and can be a good reference guide if you are looking for international pieces from the likes of Australia, France, the United Kingdom and Germany.

Fake? Tampered with? Then worthless

Collectors are very particular about buying authentic items. If your glass insulator has been tampered with, this effectively makes the piece worthless.

Common things like dying or staining the glass artificially, repairing cracks, imprinting a brand or serial number, and frosting glass to improve its appearance will nullify the insulator’s value.

As we’ve said before, glass insulators were mass-produced. And whilst usually, any damage would make something less valuable, in very specific circumstances, it can have the opposite effect.

For example, if they have different colors run, unusual markings on their glass, or natural imperfections during manufacturing – these can make them rather exotic in the eyes of a collector.

For example, a CD 158 Boston Bottle Works went up for auction for an incredible $16,000 because of its highly unusual amber color and defected wire grooves.

Where can you buy and sell antique glass insulators?

Many insulator clubs and societies are operating around the world to promote the buying and selling of rare insulators.

If you’re serious about selling glass insulators, you should familiarize yourself with the CD numbering system, as it’s become a common courtesy to organize listings according to these descriptors.

Also worth considering is the internet’s most popular auction website eBay! It has an active insulator category with a wide range of insulators, ranging from as low as $9.99 to $1,200.

If you’re interested in collecting insulators, but don’t want to buy or sell them just yet – you can ‘hunt’ for them in the wild.

Who knows, you could find a rare insulator – and with the above tips in mind, turn simple trash into a small fortune.