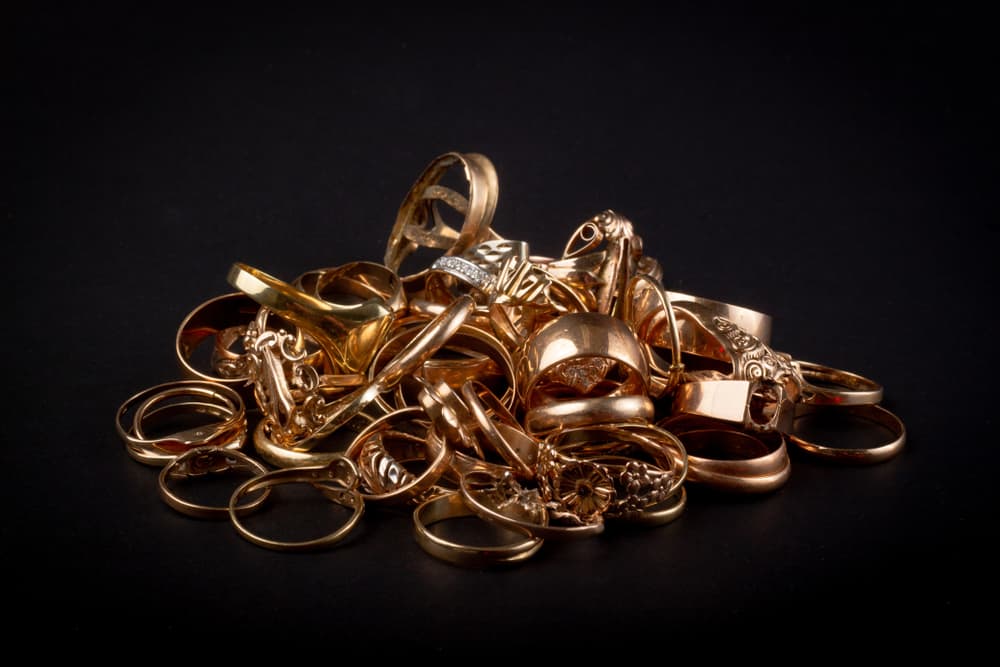 Gold jewelry has been prevalent since the Ancient Egypt era, as people have always considered gold to be the most precious material available. When it comes to antique gold jewelry or even modern gold jewelry, determining the quality and authenticity of the gold can be troublesome.

That’s where hallmarks come in. A hallmark is a unique symbol or several symbols that are stamped on items made from precious metals to ensure their quality and origin. Antique gold hallmarks are an essential tool for any collector of antique jewelry, as they help to tell apart the genuine from the fake ones.

But, what are the different types of gold hallmarks to look out for? And, once you find them, what can you do with them? If you want the answers to these questions, keep on reading!

In this article, we’ll have a look at the history of antique gold hallmarks, their different types, how to spot them and how to utilize them to determine the value of gold jewelry.

People have always been concerned about whether their gold jewelry was made of pure gold. In fact, according to a legend, Archimedes’ “Eureka” moment occurred when he was trying to determine the purity of a gold crown that belonged to King Hiero II.

Local governments mandated the first official hallmarks in Europe during the Late Middle Ages. These hallmarks were the first form of consumer protection regarding items made from precious metals.

In 1260, King Louis IX of France established the first hallmark for silver, and in 1313, the first gold hallmarks were introduced. In 1300, King Edward I of England mandated that all silverware needed to meet a specific sterling silver standard and must be assayed by master artisans who would then stamp the item with a leopard’s head.

Hallmarks for silverware also became mandatory in Switzerland in 1424. To this day, the only items that require hallmarks in Switzerland are watch cases from precious metals, whereas it’s optional for other jewelry or silverware.

As the decades passed, additional hallmarks were added to represent the specific maker, the date, and the Assay Office that was established in 1478 in the Goldsmiths’ Hall. In 1697, the Britannia Standard for silver coins was issued. This was a higher standard than sterling silver to prevent people from melting coins to get pure sterling silver.

There are several different types of gold hallmarks. But, since hallmark regulations can differ significantly, each country has its own compulsory marks that must be present on gold items. This makes international hallmarking particularly difficult since the different hallmarks of each country are not always accepted in other countries as equivalent.

For example, Great Britain mandates three different hallmarks: the Assay Office mark, the Fineness mark, and the Sponsor’s or Maker’s mark. There is also the less common Date Mark that differs among Assay Offices. Comparatively, in the United States, you may find tally, retail, duty, or designer marks.

Also, different types of hallmarks were used during different eras, and some antique items might not even have any marks at all. Finally, every precious metal has its own hallmarks specific to the material.

How Do I Identify Gold Hallmarks?

In general, identifying hallmarks is a complicated process that should usually be done by a trained professional. Also, there’s the issue of pseudo marks. After all, despite hallmark symbols being unique, it’s still easy to just stamp any gold item with a particular stamp.

Unfortunately, despite the harsh punishments, counterfeiting was prevalent during the 18th century and 19th century. Thus, many pieces of antique jewelry might be fake, despite having antique gold hallmarks.

That’s why you should ideally look for a professional appraiser to help you identify the hallmarks on your jewelry and determine its authenticity.

Nevertheless, the most popular and common gold hallmarks are:

Fineness marks, also known as millesimal fineness marks, are arguably the most well-known gold hallmarks. They aim to determine the gold purity and measure parts out of 1000. These numbers can also be translated to the more familiar karat scale (or carat for the UK):

These symbols are the crown for gold, a lion for sterling silver, and the symbol of Britannia for Britannia silver, among others.

You should also remember that 24-carat gold is very soft, and items made from it can easily acquire dents. Thus, most jewelry makers mix it with other more durable metals or alloys.

The sponsor’s mark denotes the company or person that was responsible for sending the item for hallmarking. This isn’t necessarily the same person or company that manufactured the item, as it can be an importer or seller of the piece. Nevertheless, in order to have a sponsor’s mark, the sponsor must be approved by an Assay Office first.

There’s also an optional maker’s mark that shows the official manufacturer of the particular item. Generally, the maker’s mark does not constitute any official certification. But, this antique gold hallmark can be particularly useful for appraisers or collectors, as it can give them information about the item’s maker.

Another essential hallmark is the Assay Office mark. This mark indicates the specific British Assay Office that has approved the item. Since 2013, UK Assay Offices can also issue hallmarks outside the UK territory. However, according to the legislation reform, there needs to be a separate “offshore” mark to indicate that the item was assayed outside the UK.

Some of the most popular Assay Offices in the UK and Ireland that still operate are:

There are also several regional Assay Offices that have ceased their operations. Some popular ones among collectors are the one in Norwich that closed in 1701 and the ones in Chester and Glasgow, which were the last to close in 1962 and 1964, respectively.

Date marks are usually optional and can vary significantly based on each Assay Office. But, they can be a great way to assess the era of a particular piece. Date marks are essentially letters that correspond to specific years. A recent example is the letter “S”, which corresponds to 2017, the letter “T” for 2018, and so on.

It’s important to remember that there are many variations of date letters on the Assay Office. Also, sometimes Assay Offices would use different shapes or the lowercase of the same letter to indicate different years.

Gold hallmarks don’t really add any value to an item by themselves. However, an item with several compulsory and optional hallmarks can give you a lot of information about its origin and material. Still, there is plenty of antique jewelry that has no hallmarks on it.

That’s because, despite hallmarks being popular since the 13th century, they only became mandatory for all precious metals around the 1920s. Therefore, any item made from precious metals before that time is not subject to the requirements of Assay Offices.

In any case, determining the value of your gold jewelry based on its hallmarks can be a complicated process that requires a lot of knowledge. If this seems too complex, you can look for professional appraisal and evaluation services.

A professional appraiser will help you find all the information you need about your antique jewelry. Whether the item has gold hallmarks or not, an antique jewelry expert can deduce all the necessary information about the era and materials of a piece of jewelry.

All in all, antique gold jewelry has always been popular among collectors, both for its value as a piece of jewelry and its gold value. That’s also the reason that counterfeit gold items are so popular.

Therefore, you should do plenty of research on gold hallmarks and, ideally, ask for help from a professional estimator or an experienced collector. Their knowledge and expertise will help you determine the origin and value of your jewelry, as well as ensure you don’t get scammed.

But, don’t be afraid to go out there, look for antique gold items and try to identify their antique gold hallmarks yourself. You never know what hidden treasures you might find!