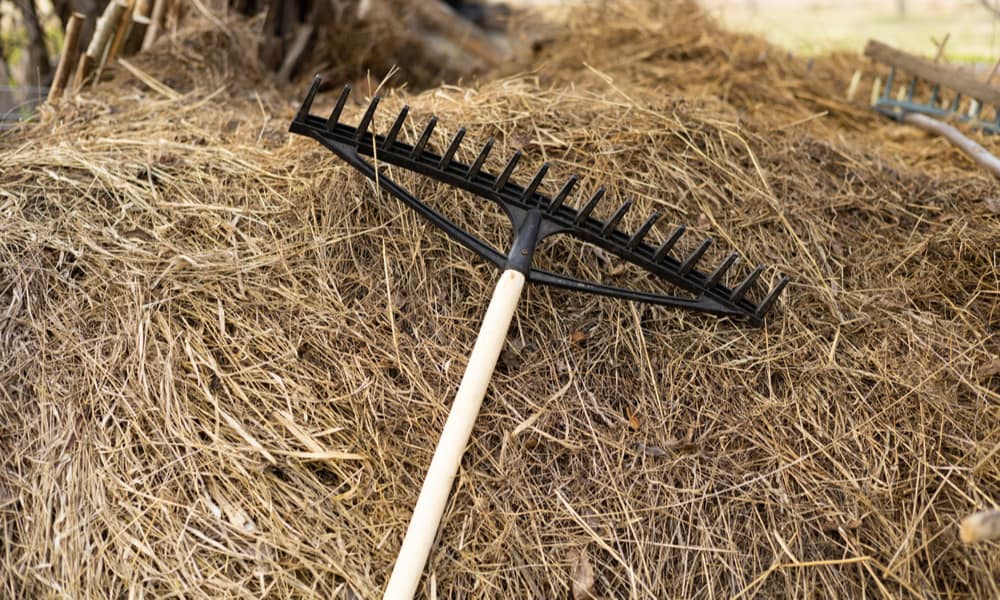 Antique hay rakes are old tools that farmers used to rake hay into piles before picking it up. The procedure included cutting and drying the grass, raking it into piles, and pitching it onto a wagon. Before the 19th century, people used wooden rakes for this purpose and made less than two acres of hay a day.

Jeremiah Bailey from Pennsylvania invented the horse-drawn mowing machine with six knives attached to the revolving wheel in 1822. As a result, cutting grass became more effortless, but farmers still collected hay from only two acres a day. The next step was horse-drawn rakes with wooden combs that provided better results with less work.

Before the 19th century, farmers used only primary tools, like wooden rakes, scythes, and pitchforks, to make hay. After cutting grass, they let it dry and then raked hay into small piles. The final step was pitching it onto a wagon. One man could collect hay from up to 2 acres (0.8 ha) for a day.

There were three primitive rake types in those times. Surprisingly, most of them are still in use today but are made of other materials. 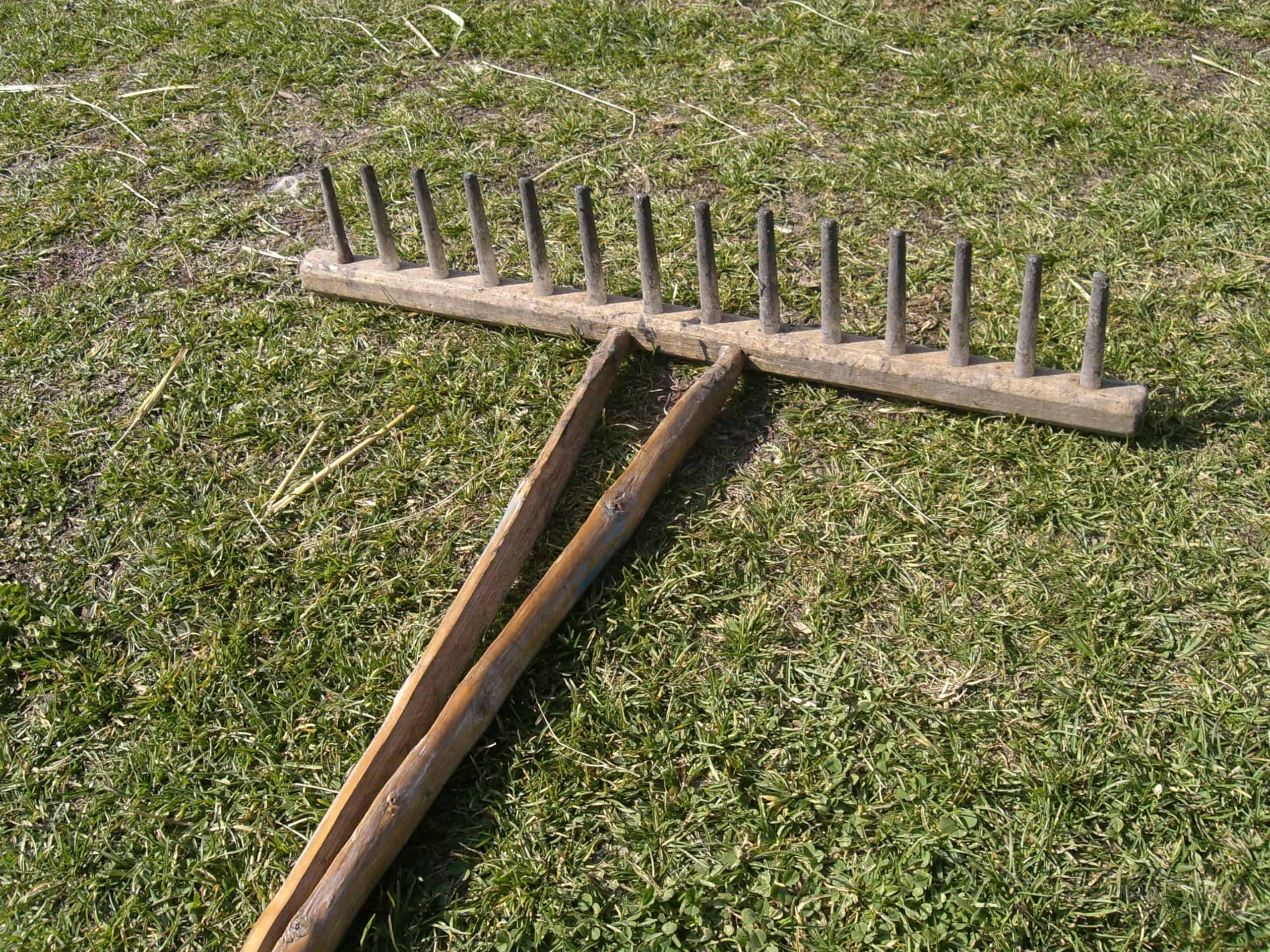 Farmers have used this wooden rake for collecting hay after cutting grass. 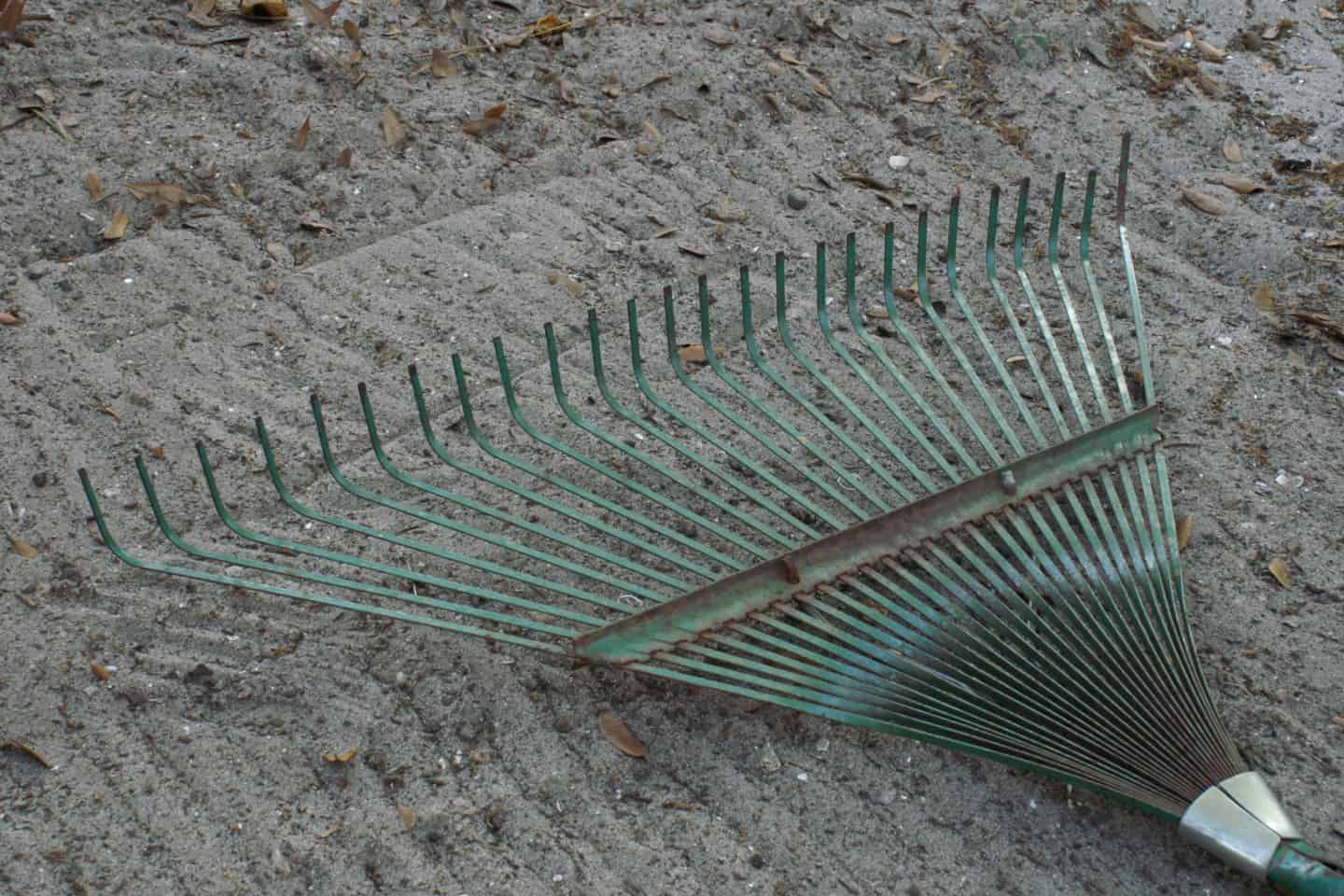 Farmers have used this model for removing and collecting leaves and grass. It had a long handle and stiff metal teeth expanding into a triangle shape. 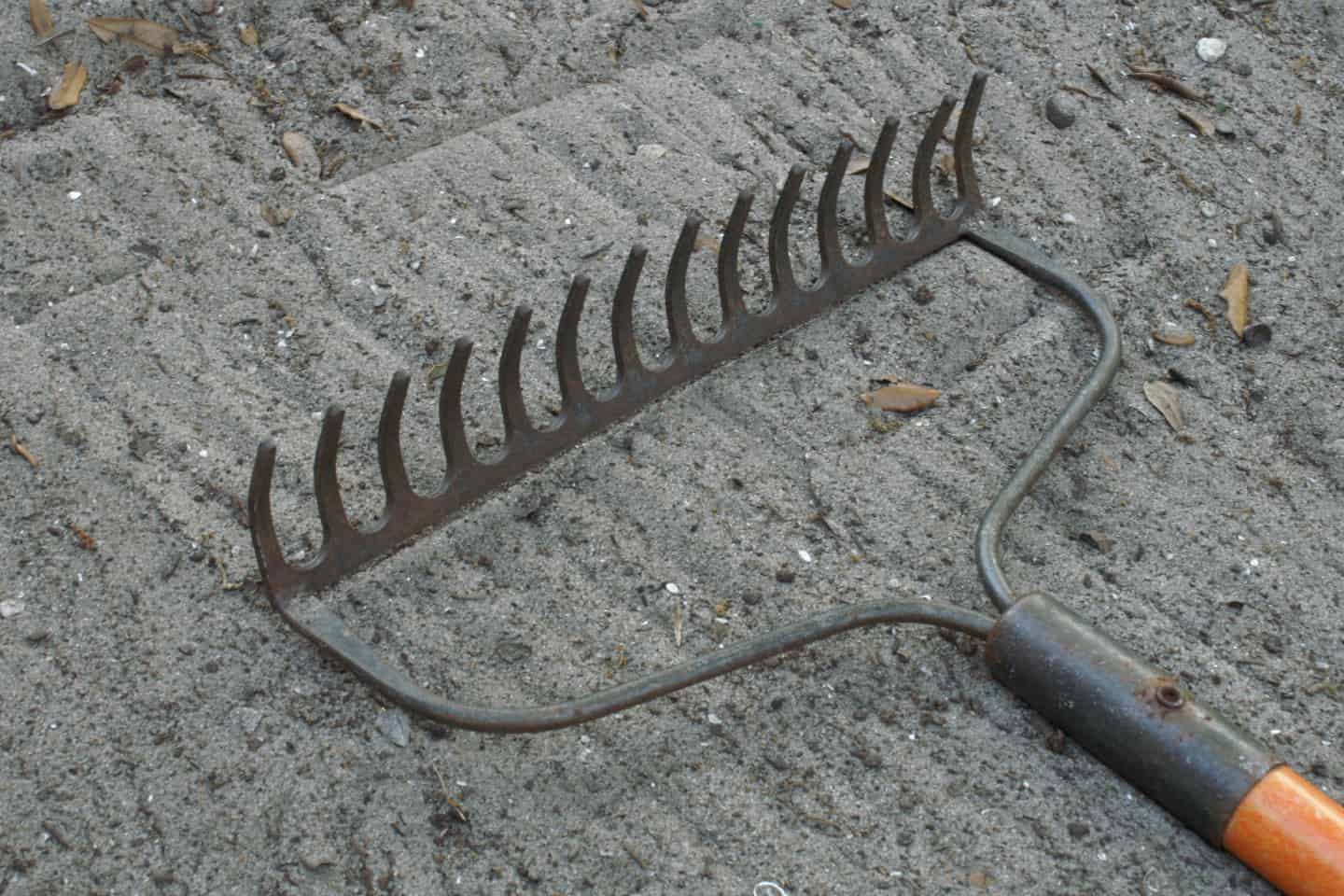 This garden rake type came with a handle and a bar with short metal teeth. An additional bow-shaped extension allowed effortless leveling and scraping, and farmers used this rake type for removing soil and rocks.

Most farmers started using horse-drawn mowing machines in the early 19th century, increasing the amount of mown hay in one day. Jeremiah Bailey from Pennsylvania patented this device in 1822.

Unfortunately, the machine couldn’t speed up the entire process since it was impossible to collect more hay than before. The problem was raking hay into piles by hand before hand-forking it into wagons.

While the horse dragged hay rake across the field, the farmer used attached plow handles to manipulate the machine over stumps and rocks. Since hay gathered on the teeth top over time, the farmer needed to stop the horse and shake loose hay as soon as the rake was full.

This rake type was a new invention that came with the second teeth set for gathering hay. Once the first set was filled with hay, the farmer activated the second one by lifting the handle.

That way, it wasn’t necessary to stop the horse and waste time removing hay from the teeth. This machine became a standard tool in the American Midwest by 1870.

There were no specialized manufacturers for hay rakes in the very beginning, so carpenters and blacksmiths tried to make the best products possible. They learned from numerous tries and errors so that you could recognize numerous designs created in that period.

Manufacturers started adding seats to hay rakes in the 1850s. For instance, Calvin Delano from Maine invented and patented a sulky rake with wooden teeth tipped with the iron in 1849. A farmer could raise them with a lever without leaving his seat.

The hay dump rake pulled by a horse came in the 1870s. About two decades later, the first equipment for baling hay into square bales occurred on the market. Since they couldn’t move, farmers needed to bring the hay to it by hand.

Unfortunately, most of these old machines made of wood often rotted out and ended up as firewood. As a result, they are rare, and collectors need to be patient to find one in decent condition.

Believe it or not, many people collect antique hay rakes. If you are one of these tools admirers or have a few in a barn, you probably want to know more about them. Since farmers have used them for centuries, you should expect to find several different styles, including valuable ones.

The first antique hay rakes came in two primary forms. The earliest were hand tools with extra space between their teeth, and you could still find unchanged models in some parts of the world. Another option was horse-drawn hay rakes, but farmers sometimes used oxen, mules, and later tractors to pull them.

People probably used tree branches to make the first hay rake models before creating handled hay rakes during the 19th century. Everyone could drag this primitive tool over the dried grass and collect it with wooden teeth before making a pile.

Simple designed antique hay rakes typically featured a wide piece of wood (the body) with wide-spaced wooden teeth placed in a row. The rake body was attached to an approximately 5 feet (1.5 m) long wooden handle with or without metal pieces, depending on the production period.

Even though the hay rakes look almost the same worldwide, you can notice several variations in design. It will primarily depend on the region or state where they occurred.

Therefore, some models have additional features besides the standard body, teeth, and handle. For instance, you can see hay rakes with a rounded half hoop providing stability for the rake base. Another model is a rake with teeth on two sides, allowing longer use.

Once a horse-drawn hay rake was invented in the 1850s, collecting hay became more efficient. Such a model could collect about eight times more hay than one hand rake, increasing the quantity of feed and number of cattle one farmer could handle.

Those dump rakes were wide, two-wheeled machines with a seat and curved teeth. The first models had wooden teeth, but they were replaced with iron ones over time.

While the horse pulled the hay rake across the field, teeth collected dry grass. Once the rake was full, the farmer stopped the horse, lifted the rake, and shook the hay on the pile. In those days, the goal was to transport loose hay to the barn after pitching it on wagons by hand.

Farmers got the possibility to attach modified hay rakes to tractors after inventing this gasoline-powered machine in the 1930s. Their appearance hasn’t changed much until today, but manufacturers have used different materials to increase the quality and durability of their products.

The primary hay rake part was primarily wooden, but the wheels with teeth were made of iron, sometimes of steel. Contemporary models don’t contain wood, and the entire construction is metal. In the 1940s, combined raking and baling machines replaced them.

These mechanically more complicated hay rakes used in mid-20th-century had a mounted chain- or gear-driven reel. It was typically placed at about a 45-degree angle to the windrow.

After attaching to the horse or tractor, they collected hay and pushed it to one rake side while moving across the field. Modern versions have used a higher frame system and more severe transverse angle, but the basic operation principles stayed practically the same.

This rake type produced well-formed but fluffy piles to speed up hay drying. Long tines collected hay just above the ground and lifted it into the pile without digging up dirt.

As I have already mentioned, most wooden hay rakes rotted out over time, and farmers used them as firewood. Therefore, finding the oldest models can be challenging, and dedicated collectors are prepared to pay about $50 to $100 for those in decent condition.

The final price always depends on the hay rake’s age and condition. Be prepared to pay more for antique examples, particularly those with unique engraving and atypical design.

Sometimes, you can find only dump rake teeth since the wooden handle rotted. This part in good condition is typically worth about $25.

On the other hand, you can find horse-drawn hay rakes without many problems, while tractor-drawn hay rakes are abundant on the current market. When you find an intact model with all saved parts, their price can be a few hundred dollars.

For instance, one beautiful antique horse-drawn hay rake was recently sold for $400 on eBay. 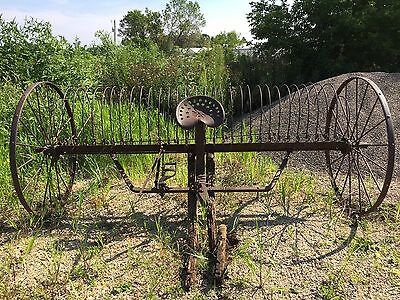 However, you can find a hay rake in decent condition for only $175 after doing some research. 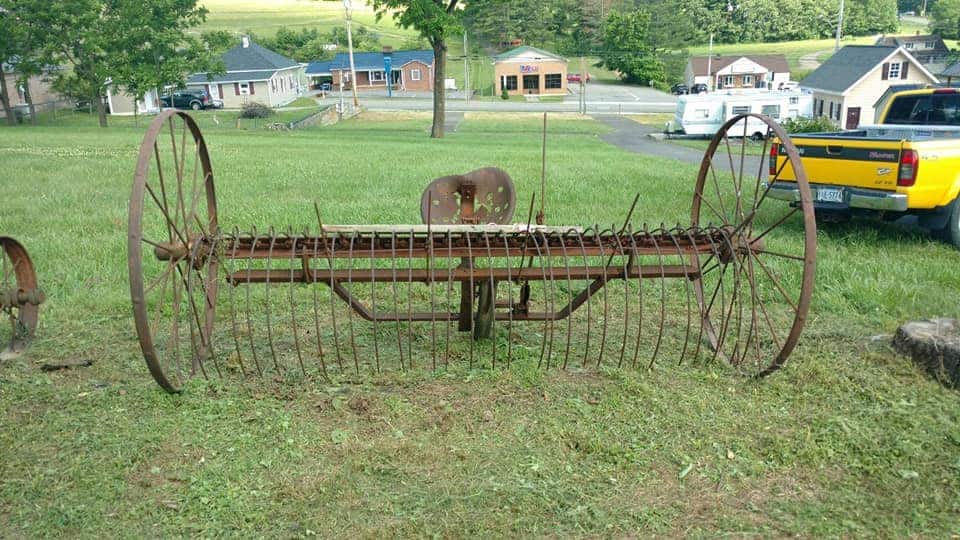 As proof that people’s demands often differ significantly, one owner has offered his antique horse-drawn hay rake for sale on eBay. He asks a fantastic $1,400 for this tool without providing transportation. 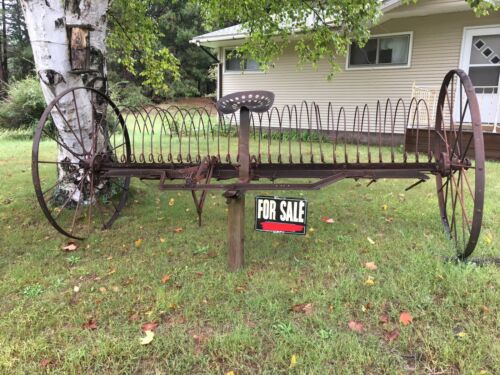 The Shoppok is an excellent place to find different branded hay rake types at reasonable prices. You can also buy only missing parts for a horse-drawn hay rake you have already had. For instance, you can buy three antique hay rake wheels for $125 if you have one wheel or need them for an art project. 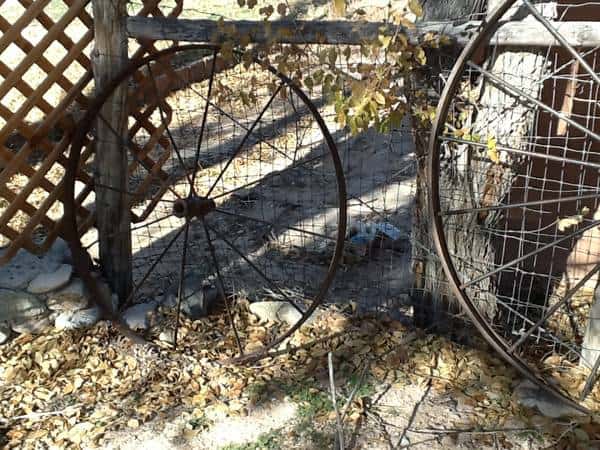 Once you decide to purchase a horse-drawn hay rake, you should know that the owner can ask for any price. However, the items’ value is always as much as someone is willing to pay for it.

Many of the listed rakes have been on offer for more than a year. The reason is probably the mismatch between demand and asking prices, so you have room to bargain.

Hay Rakes as a Valuable Piece of American History

Keep in mind that there are not too many hay rake collectors, but antique farm tools are often a part of history museums’ collections. You can also see them at educational venues where new generations learn about their ancestors’ life.

If you have a ranch or large yard, you should consider displaying nostalgic antique hay rakes there. That is a way to show respect for our history. Plus, having such a unique and rare item can be intriguing for anyone who stops by.

People have come a long way from old wooden rakes to modern machines that collect hay in a very short time. However, they are still in use and are valuable tools in daily work on farms.