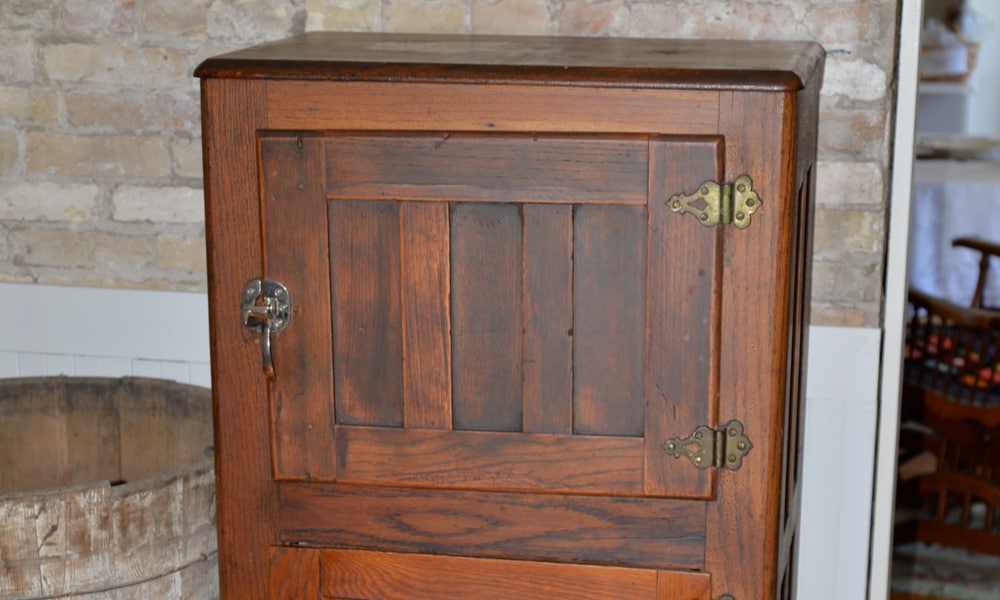 Imagining modern life without a refrigerator is quite a challenge. Still, people have lived without it for centuries and have managed to save food from spoilage. They also wanted to keep their drinks cold, so they used bulky ice blocks, resulting in the Ice Box invention.

Finding well-preserved old Ice Boxes is quite a task. Although they usually don’t serve the original purpose, these collectibles often cost thousands of dollars. If you are interested in antique Ice Box identification and value, you will have many questions. Let’s discuss them. 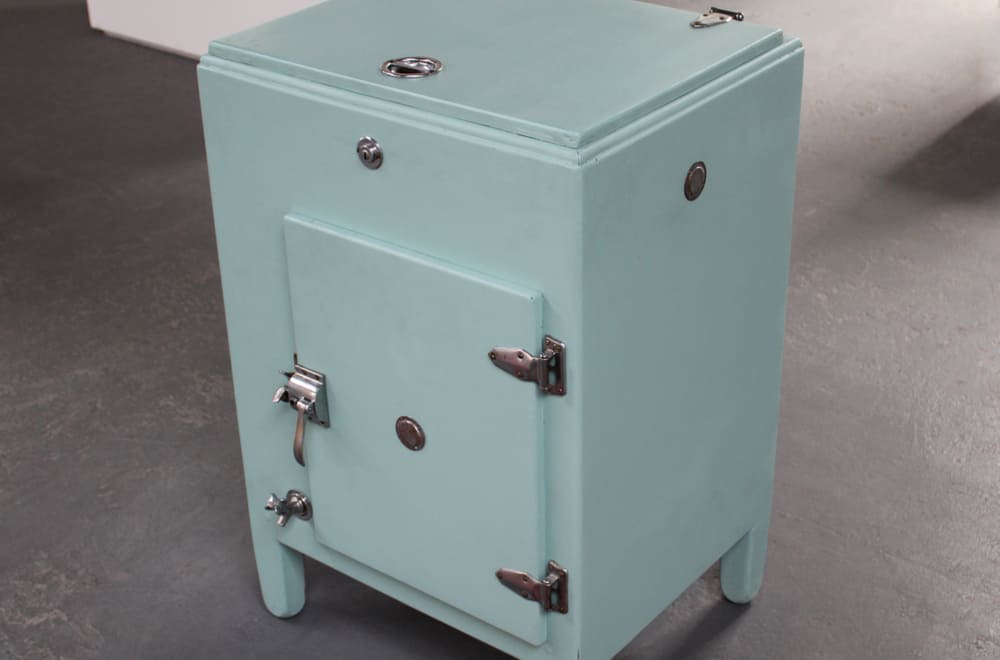 Up to the 1800s, people used pits in the ground to protect surplus food from decay. They would line the walls with stones, build the hut to protect the meat from Sun, and fill the empty spaces with ice blocks. Still, such ice houses were massive and impractical for everyday use.

In 1802, Thomas Moore invented a small Ice Box he used to transport dairy products. He initially named it a REFRIGIRATORY but then modified that initial term to a REFRIGERATOR, patenting it in 1803.

In 1830, Ice Boxes’ popularity started to grow. People moved en masse to cities, and the distance between food producers and customers increased. The consequence was an increase in the prices of fresh products and more frequent purchases.

The problem with groceries’ cooling became more and more significant with the end of the Civil War. Generally, local economies grew, and cities became overpopulated.

As expected, a single ice block lasted several days, depending on its size and the outside temperature. Therefore, Ice Boxes became necessary for every home, but there was also a demand for commercial Ice Boxes for pubs and restaurants.

In the 1930s, most urban families could afford a small modern refrigerator, so they forgot about Ice Boxes. Still, some folks kept using them until the 1950s, especially in rural areas and on remote farms. 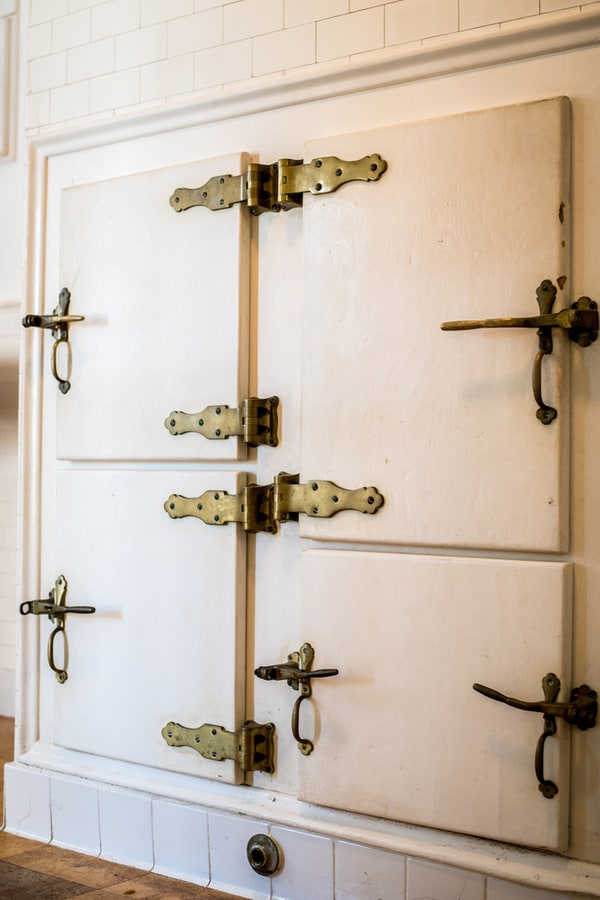 People who lived in the late 1800s could purchase an Ice Box for $15 to $50, depending on its design, features, and material. As you can guess, commercial models were several times more expensive than devices for household needs.

The first Ice Boxes typically consisted of a wooden cabinet with hollow walls lined with tin or zinc for insulation purposes. The procedure meant purchasing a device and waiting for delivery. Manufacturers used various materials to protect their products during transportation, such as:

These materials were also helpful for filling space between the Ice Box double walls. People used to put ice in a compartment or tray near the top of the ice, while cold air circulation prevented or slowed down food decay.

A typical Ice Box also had a spigot (drain hole) with a storage unit for melted water. Unfortunately, inexpensive models came with a small pot for water collecting, so emptying a device was a daily job. Since no one wanted to waste that water, it was used for drinking and cooking.

Typically, most models came with at least two separate units for storing food. That way, people could separate meat from fruits and cheese, for example.

Although Ice Boxes designs vary significantly from one manufacturer to another, there are five main types you can find on the current market: 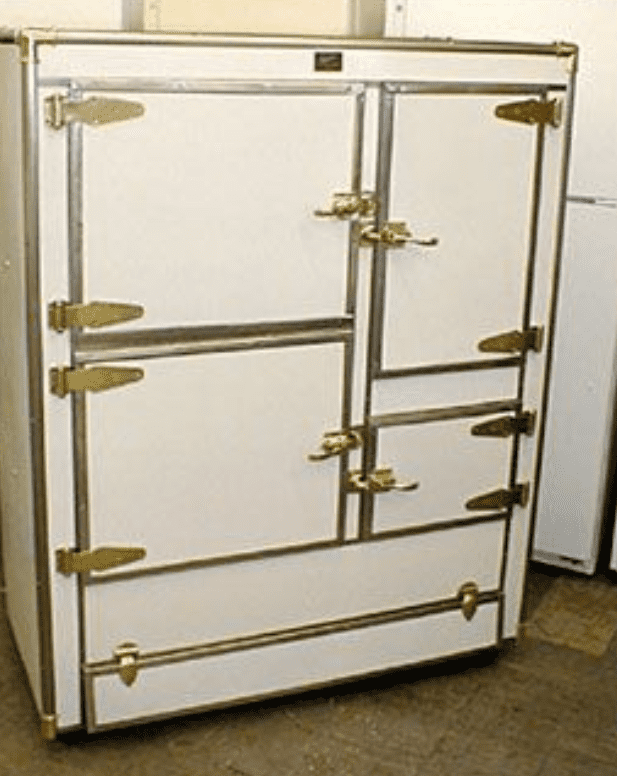 People in the past preferred practicality more than aesthetics, so the choice of Ice Box colors was limited. Most customers bought unpainted cabinets in natural wood color. However, high-class society members often paid for carved, ornamented models, while some pieces came with porcelain or glass panels.

Rare designs included mirrors or artistic outside details, particularly on models dedicated to commercial use and luxury hotels. These Ice Boxes were bulky and had far more compartments than home devices.

The choice of colors was somewhat wider for metal Ice Boxes since manufacturers painted them in red, lime white, and black. Occasionally, their surfaces were decorated with flowers or contained a brand, slogan, or particular catchphrase. 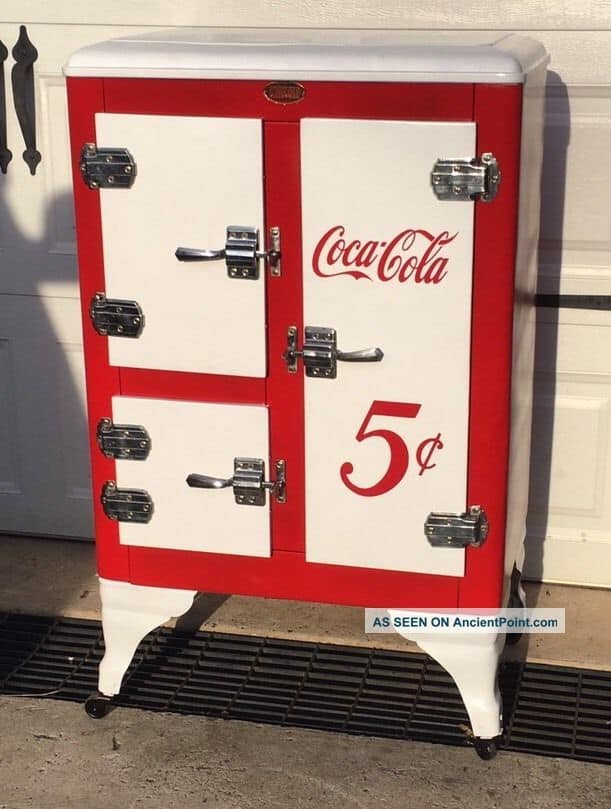 Nowadays, you can rarely find antique Ice Boxes, especially in their original and preserved condition. Since that increases their value, you may also come across hustlers trying to sell fakes. Therefore, you should find ways to recognize a genuine antique piece.

Since the moment when Thomas Moore’s invented the first Ice Box, many companies started producing them for both households and businesses. You can find a plate with a company logo and production year on the top drawer or the device’s backside. Some of the well-known names were:

It is often impossible to distinguish a genuine antique Ice Box from a replica or restored piece. Luckily, a few key details indicate that you have found an original: If you are not an antique expert, you will probably have difficulties finding the desired antique Ice Box. Occasionally, it is possible to see a few models in a local antique store, but the most valuable pieces have often stayed forgotten in the warehouses on distant farms.

If you want to buy one of these devices, the best option is to look for it online, on specialized antique sites, or on auction sites. The price range is from a couple of hundreds to tens of thousands of dollars, depending on the model, preservation levels, and availability.

The crucial problems collectors typically face include a limited number of these collectibles on the market. Since they always attract attention when appearing, it is not easy to get one. However, you shouldn’t buy an Ice Box without checking out a few essentials, like:

As I have already mentioned, Ice Boxes were sold for $15 to $50. Nowadays, you need to set aside at least a few hundred dollars, assuming you want to settle for a home edition device in poor condition.

A standard, well-preserved household Ice Box in original condition is worth around $5,000, provided it is usable. Still, don’t immediately dismiss professionally restored Ice Boxes. They can be lovely and typically cost up to $3,000. If you plan to buy a commercial multi-panel Ice Box, you can count on paying at least $10,000.

Features like a spigot for pouring water straight from an ice block can further increase the device’s value. The same goes for specific design details, such as ornaments, carvings, or mirrors.

If you have a limited budget, you can find a less expensive Ice Box for approximately $400. Unfortunately, such a device was probably among the last ones produced or suffered significant water damage. In that case, you could try to repair it yourself or hire a professional to restore it for you.

Most Valuable and Rare Ice Boxes

Since companies used to produce Ice Boxes in bulk, you could find two almost identical on the current market, but with a significant price difference.

For instance, most wooden Ice Boxes resemble each other and share the same simple design. However, you can recognize crucial differences in the wood shade, the brand, ornaments’ presence, and preservation levels.

On the other hand, excellently preserved Ice Boxes in original condition with a superb design always attract the attention of numerous collectors. Such pieces often fetch a higher price than similar but ordinary devices. 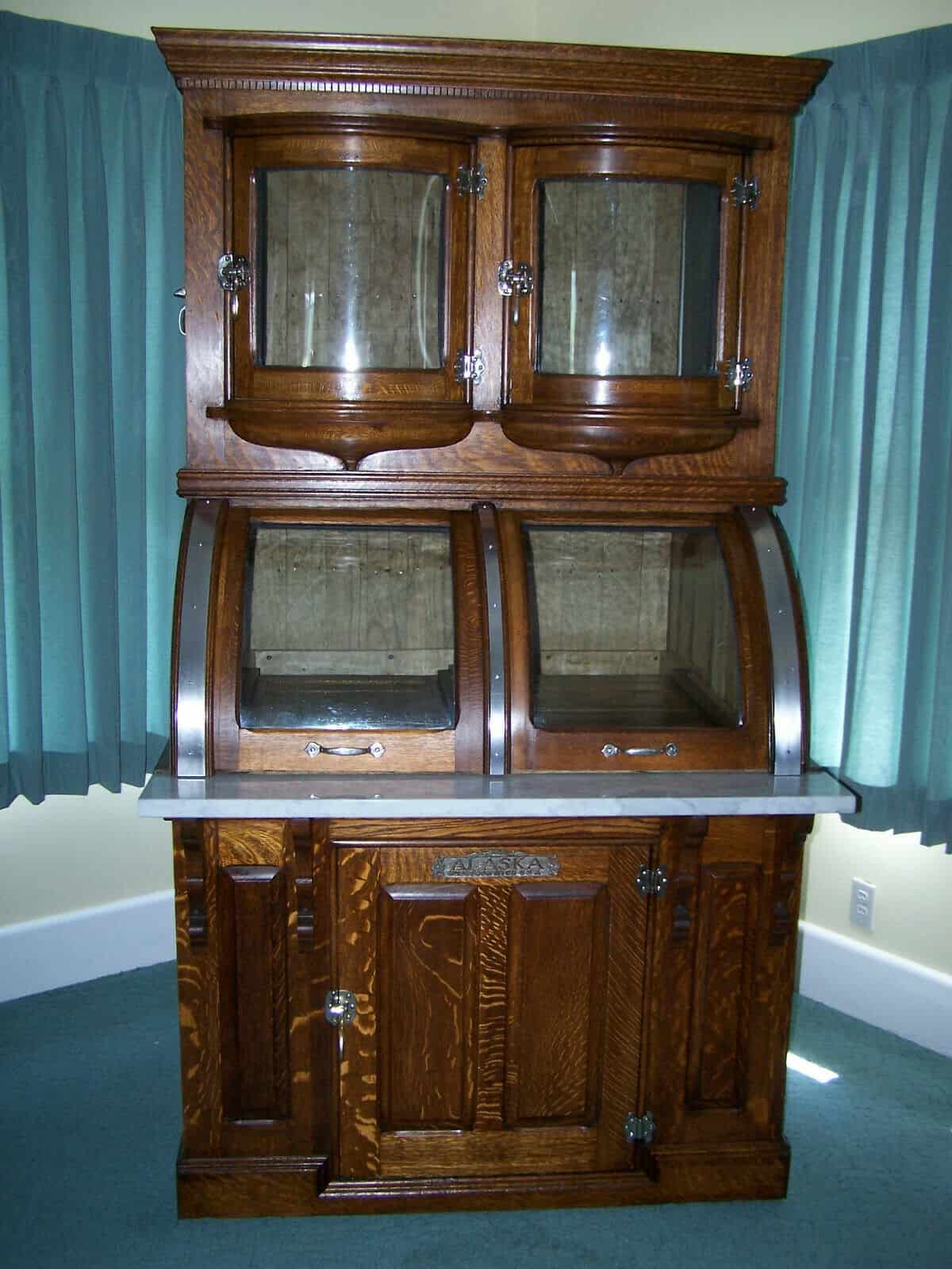 Alaska Refrigerator Company made this fancy Ice Box for commercial use. It had double curved glass doors and a well-preserved marble slab.

You can see an ornamented plate with the engraving ALASKA Muskegon Michuba on the front panel. This particular piece is perfectly preserved, although it misses the original compressor. Even with this flaw, its value is an impressive $15,000. 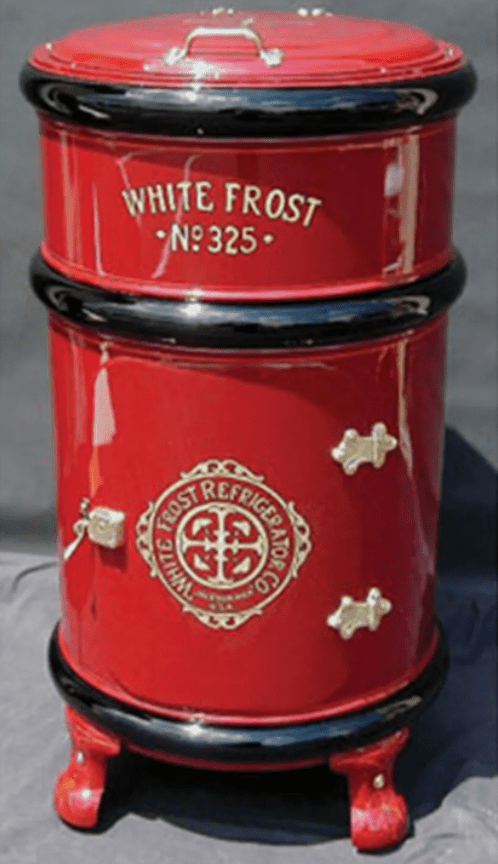 Typically, metal Ice Boxes come with no specific details, but it is not the case with this cylindrical model produced in 1906. It is red, portable, and stands on raised legs.

It has white ornamented hinges and handles for easy carrying placed on the top. Plus, the front door shows the manufacturer’s name and the serial number. No wonder it costs $7,015. 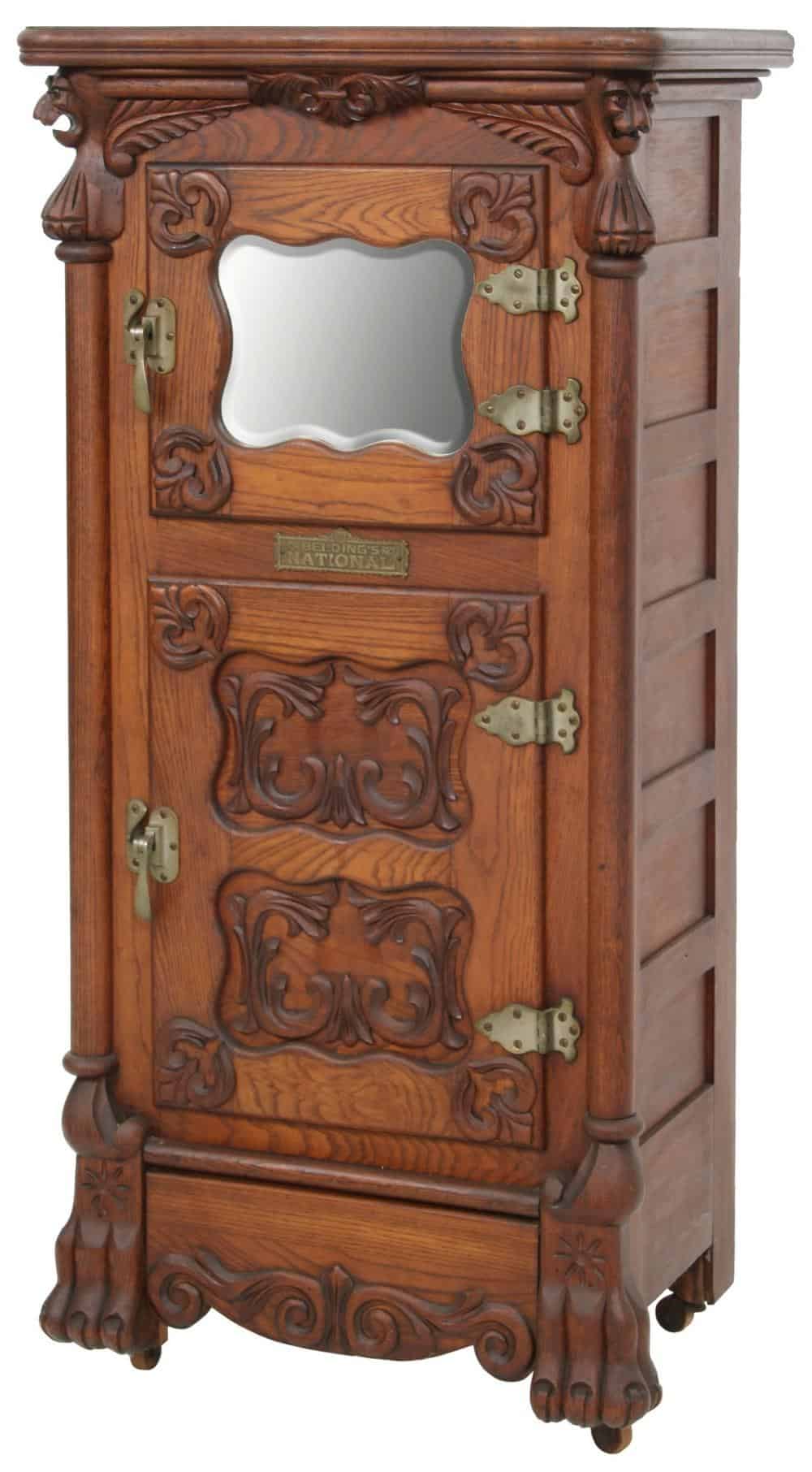 If you are looking for a classy Ice Box with griffin heads on corners and claw feet, you should know that the Belding’s National company created one just like that in 1905. This Ice Box has brass hardware and a beveled mirror on the front.

If you doubt the originality, two plates on both front and back sides will provide you with all the info about the manufacturer. The price of this Ice Box is $2,500.

This Ice Box’s design combines wood, cast iron, and porcelain panel. The seller points out that the exterior paint on the door panels is not original, and you can see some wood damage and scratches on the surface.

Yet, this massive Ice Box reached $3,100. Atypically for Ice Boxes, the seller offered shipping to address instead of a standard personal pick-up. 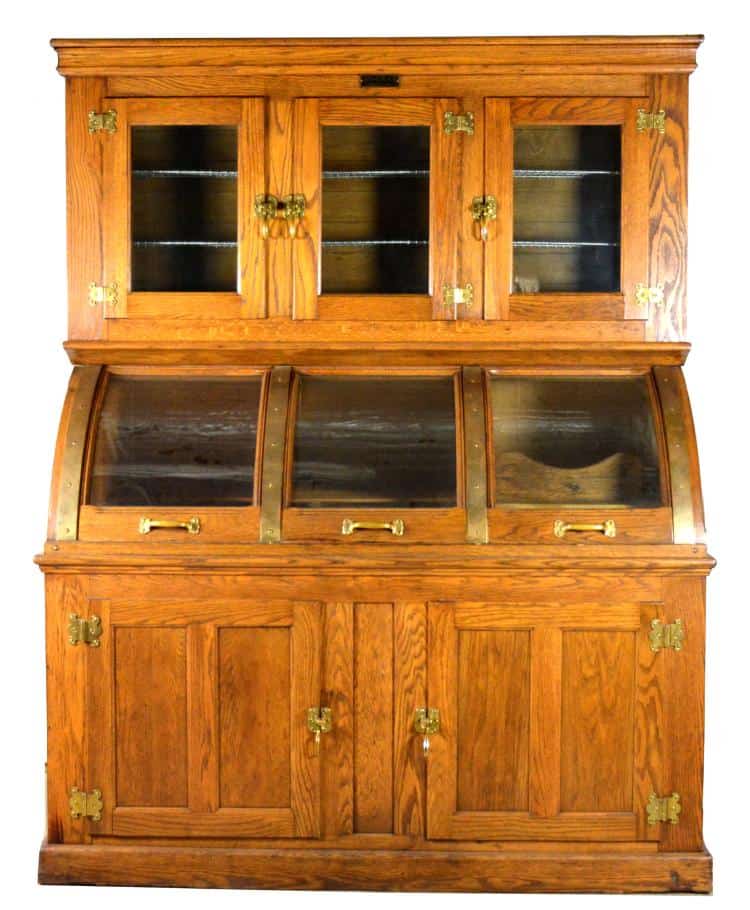 Commercial Ice Boxes are usually on the expensive side of the scale, yet this device was sold for only $1,650. It has mechanical roll-back doors with internal sliding shelves, glass panels, and matching brass hardware.

It was made in the late 19th century from high-grade American oak with crown moldings and the original finish. This model is a combination of almost perfect condition and pleasing appearance.

You can sell an Ice Box if you have one, but a better option is to repurpose it. A few cosmetic changes can make a miracle, and you can use your piece as:

The best option to start a DIY project is to clean the entire device thoroughly. Next, you should sand the wooden areas and re-varnish them again.

Always pay particular attention to the finish and metal parts, like hinges. The best option is to find an appropriate cleaner solution in the local store. Finally, it is time to polish all wrought iron details, if there are any.

Nowadays, life without a refrigerator is unthinkable, but our ancestors didn’t have them. They used Ice Boxes for food storage in the past instead. These devices are different in size, style, and purpose, affecting their value as collectibles. Nowadays, an antique Ice Box can cost from $500 to $15,000, depending on its appearance and condition.