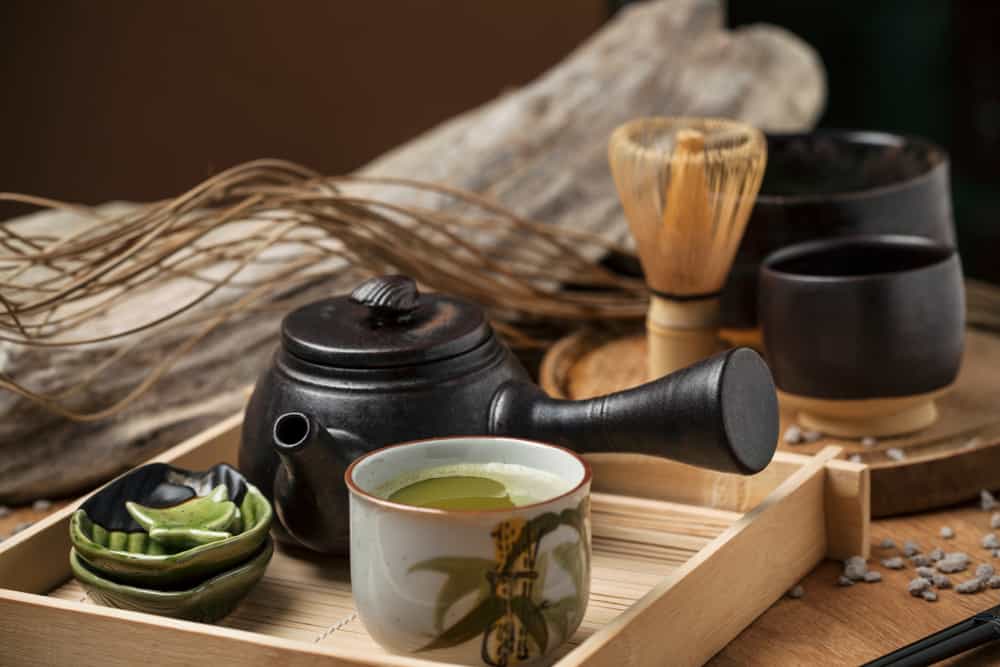 Chances are that most of us have heard of or seen a Japanese tea set in our lives. With its ornate craftsmanship and delicate construction, you might be wondering how these tea sets came to be.

The History of the Antique Japanese Tea Set 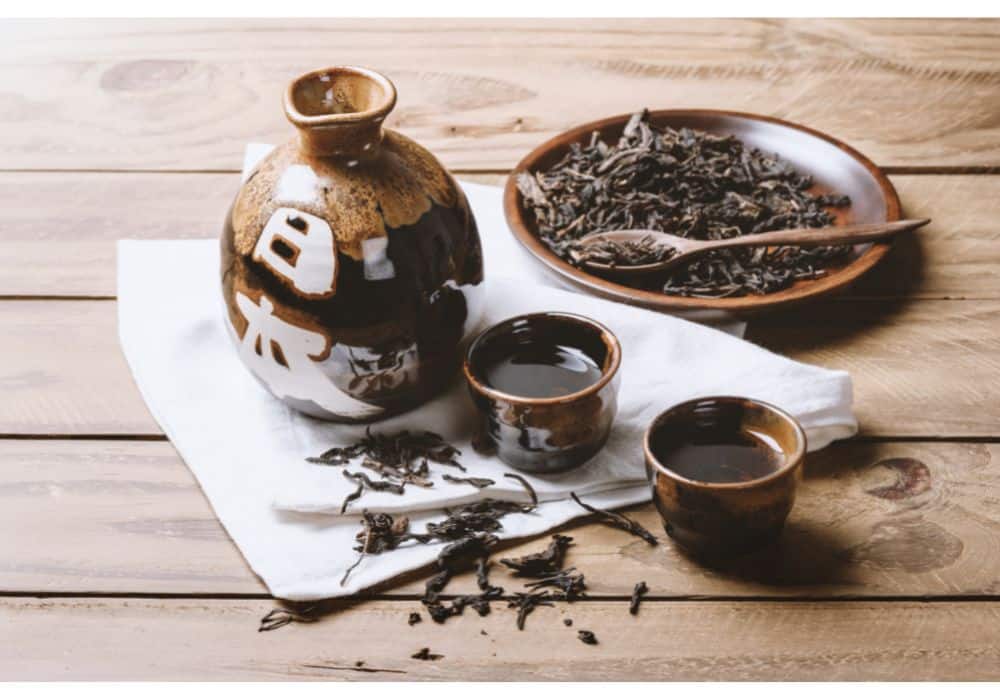 Drinking tea in Japan is an ancient tradition that began with Buddhist monks during meditation. It was later used by aristocrats in the Tang Dynasty between 618 and 907 to display their culture and means.

By the 17 century, tea time had spread to common households. Many houses even had a dedicated tea room.

The Japanese Tea Ceremony, which includes drinking green tea, soon spread to villages and cities alike, transforming into a ceremony that still remains today. At its peak, it required a series of precise movements for making tea in the company of others.

While the English translation calls it a ceremony, this event is now more informal and can be similar to the Japanese “tea time” many of us envision.

Japanese tea sets as we know them date as far back as the Momoyama dynasty in the late 1500s. It was in this century that these tea sets began their exportation to Europe and around the world. 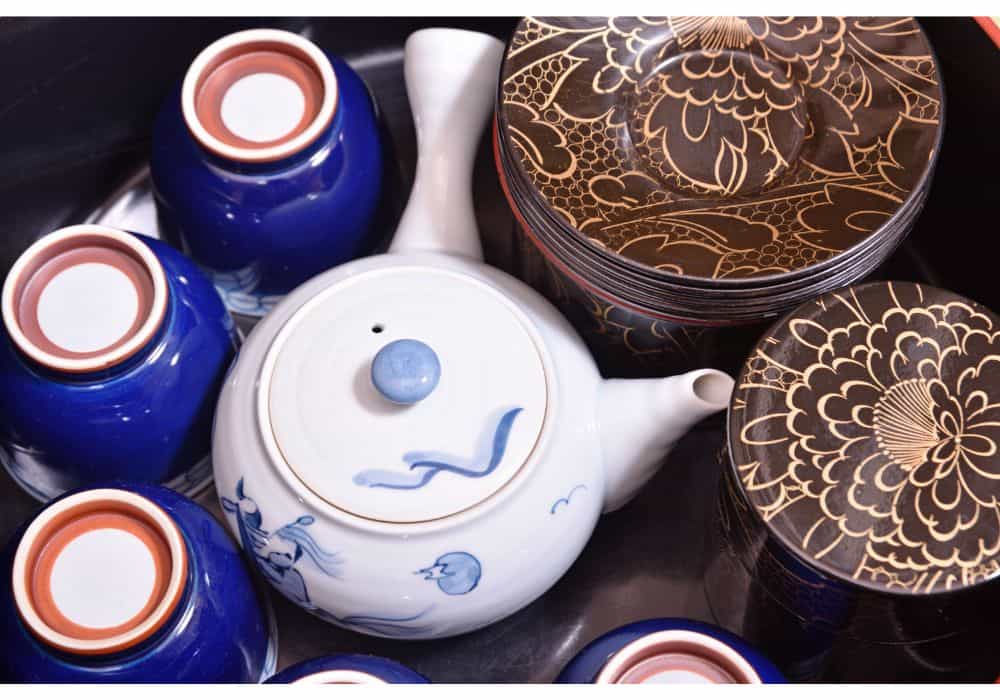 Antique Japanese tea sets can be up to 500 years old, stemming from ancient dynasties like the Momoyama, Edo, Meiji, Taisho, and Showa dynasties.

More recent antiques from the 19th or early 20th centuries are much more common, however, and come from the following manufacturers.

Note that tea sets from 1891-1921 will have a Nippon identifier due to the import laws from that time.

Kutani-ware was established in the mid-17th century and continues to be made today. Tea sets up to 1868 were marked with a Fuku mark.

From 1868 to 1912, it had the Kutani mark, often combined with the Japanese symbols representing Great Japan. Later sets up to WWII were marked with both Kutani and Japan identifiers.

Chubu tea sets were primarily exported to the U.S. in the 1950s. Most were labeled with the “Made in occupied Japan” symbol, which was required from 1945-1952, after the war.

Other manufacturer marks you may find, combined with both “Made in Japan” and “Made in Occupied Japan” identifiers, include those from the Jyoto, Mikado, Saji, Ardalt, Sango, and Noritake manufacturers.

What Materials Are Antique Japanese Tea Sets Made of?

These tea sets were mainly created from natural clay or porcelain. Porcelain incorporates some clay itself, but may also use other materials like kaolin, quartz, and silica, among others.

Those completing a traditional Japanese Tea Ceremony with green tea would use a clay tea set, allowing for better absorption of the tea flavors with every ceremony.

Porcelain is less porous, making it a better selection if you plan to drink a wide variety of teas in the same set over time.

You can find antique Japanese tea sets in a variety of colors, designs, and patterns. Many patterns are associated with their place of origin or with a theme.

Japanese tea sets have used moriage patterns for decades. This pattern is used on clay pottery to create raised patterns and designs.

Moriage pieces are unique and often painted in bright colors. Some may include a gold leaf.

Dragonware moriage pieces have dragon designs that were copied by many later manufacturers.

Bizen-ware comes from the Heian period of Japanese History. It includes pottery with a rough appearance. The majority are not glazed, which makes this set easy to grip.

Most sets are reddish brown or dark colors, while others have animals or gods painted on them.

Imaria tea sets usually incorporate nature, such as flowers or leaves. They tend to use a blue and red underglaze on a white base.

Kutani sets are made of porcelain and stand out with their bright colors, particularly using reds and golds. They may have engraved, embossed, or hand-painted marks to identify their origin.

Satsuma sets are earthenware, which is a type of clay pottery. It is lighter than porcelain Japanese tea sets, with less of a glow and less noise when tapped.

There are two types of Satsuma sets: the original kind with a heavy dark glaze and a relief pattern and the newer style with a finely crackled transparent graze. The latter used light, floral patterns.

How to Know If My Japanese Tea Set Is Antique? 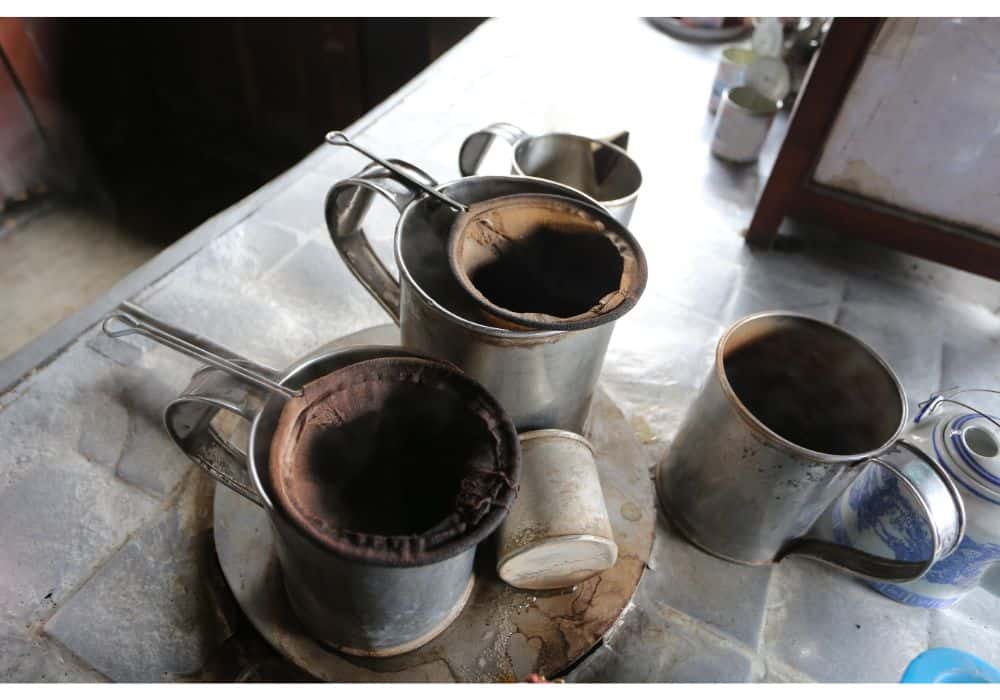 You can confirm that your Japanese tea set is antique through its markings, an official appraisal, its material and texture, and its artwork.

The best way to know if your Japanese Tea Set is an antique is through the markings on the bottom of the set. This includes the bottom of saucers, cups, and teapots.

An antique Japanese tea set could be anywhere from 100 years old to 500 years old. Beginning in the 1500s, Japan began exporting their tea sets to Europe and would clearly mark these products with Japanese characters.

If you can verify – through a native speaker, in particular – that your tea set says that it was made in Japan in Japanese, you might even be able to trace it back to its original dynasty.

The bottom of your antique Japanese set may also have manufacturers’ marks which will help you determine when it was made and if it’s an antique.

If the bottom of your set states “Made in Japan” or “Japan” it was made from 1921 to the present.

Some antique tea sets say “Made in Occupied Japan,” meaning these sets were created between 1945 and 1952.

If you are not fluent in Japanese, you will need to have your pieces translated and assessed by an antique dealer who can read Japanese. This dealer should be experienced. Don’t be afraid to contact their references to make sure you’re dealing with an honest individual.

Before selling your antique Japanese set, compare prices of similar sets online and from antique sales. If you can, get the set appraised by two separate individuals.

Another way to determine if your tea set is truly antique and Japanese is by the material and texture. There are only two materials that were used to make traditional Japanese sets, and those are clay and porcelain.

The last way to determine if your tea set is traditionally Japanese is by artwork, patterns, and designs that can identify its city of origin. This will also make identifying its age easier.

Bizen teacups are decorated with humorous figures of birds, animals, gods, and other elaborate decorations.

If your tea set has a decoration in red, gold, or other vibrant colors, it is most likely from Kutani.

Satsuma pieces have an ivory luster finish, with many featuring renderings of Japanese craftsmen at a table painting vases.

Imari pieces have a blue or rusty red underglaze on a white background with prominent leaves and flowers.

One of the most famous patterns on antique Japanese tea sets is moriage. This technique is when a layer of clay is added on top of the tea set to create a slightly raised design. Popular raised designs are golden leaves, trees, and dragons.

Not all moriage sets are antique, though, so always verify whom you are buying from. 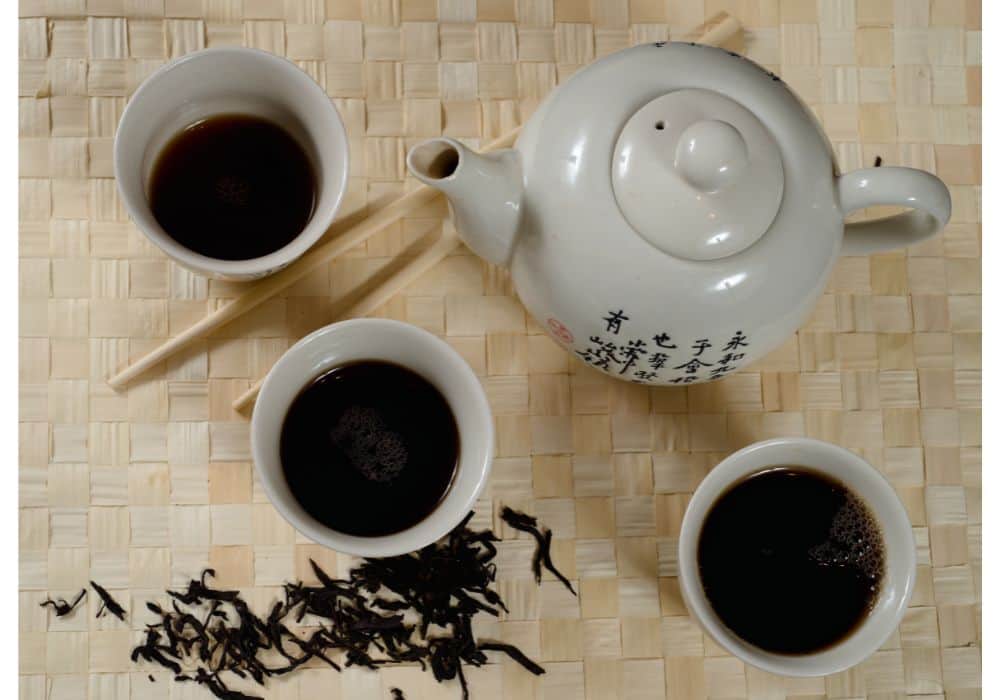 Valuing an antique Japanese tea set is a complex process that may require the help of a trusted appraiser.

To determine the value, you would try to figure out the date of production, material, design, condition of the product, and the completion of the set.

It is also important to request a certificate stating the product has undergone an authentication process since counterfeits are abundant.

Cheaper pieces may be antiques but not be a full set. For example, you can get a teacup and saucer from Occupied Japan for a little over $10.

Normal wear and tear are expected from most antiques, but large chips or cracks in your Japanese tea set can also diminish its value. The more complete the set and the better its condition, the higher the value. 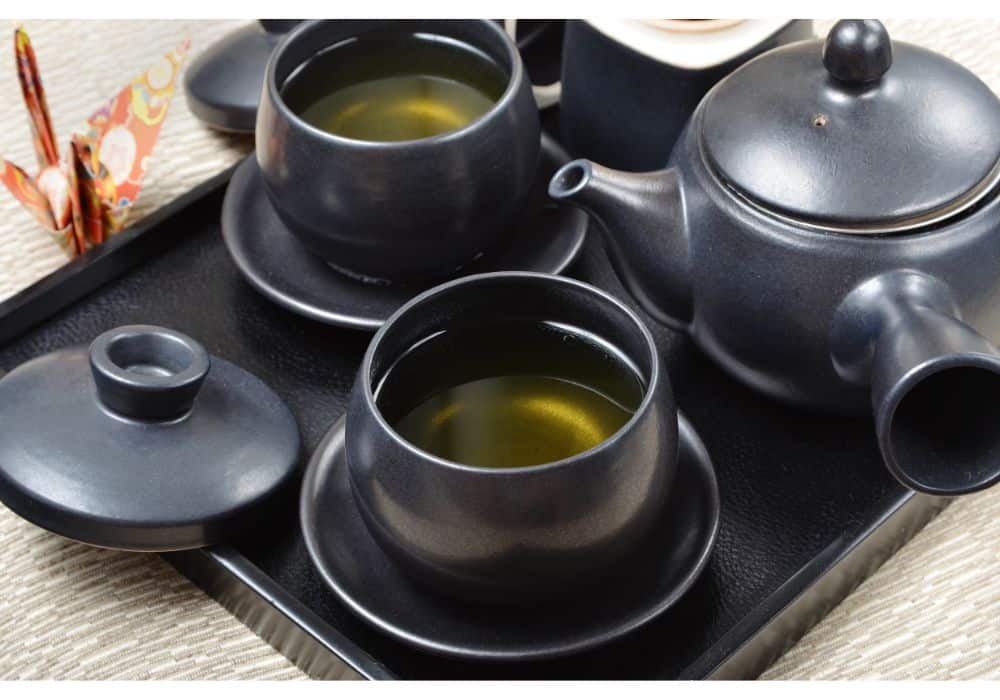 Finding Japanese tea sets made after 1891 is relatively easy. You can find them at most antique shops and online. The markings on these sets make it easy to identify which era they were made in and usually the manufacturer as well.

Finding very old tea sets is a bit more difficult, but a good place to start is Sanai Fine Art and Antiques, which specializes in the sale and acquisition of Japanese porcelain.

Etsy is another great online seller to buy Japanese and Asian antiques. The Etsy seller J Collector, in particular, has a wide selection of Japanese porcelain. Another website is Kodo Arts, which has a variety of antique Japanese pieces on sale.

You may also be able to find antique Japanese tea sets at local auctions or antique shops, but this will require a bit more legwork.

No matter where you buy your antique Japanese tea set, do your due diligence to receive any certificates of appraisals determining its authenticity before purchase.

How to Maintain an Antique Japanese Tea Set

If you have an antique Japanese tea set or plan to buy one, it will need proper care to maintain over the years, especially if you plan to actively use it.

Never put your tea set into the dishwasher. You’ll want to wash it by hand, rinsing it gently with water. Some people choose to use a very mild soap, but this should be done with caution. Avoid using abrasive sponges.

If your set is part of a collection and is not actively used, rinse it with water once a year to keep it clean. Always let the set air-dry completely, with the teapot lid off, before storing. Store the lid separately if possible – if the water stays trapped in the teapot with the lid on, you risk rusting or attracting mold.

If you live in a very dry climate, you may want to keep a small bowl of water somewhere near the set to keep the air humidified.

Your Japanese tea set may be worth just a few bucks or a pretty penny, depending on its design and when it was created. The stamp on the bottom of the set will be your best bet to determine when it was made and by whom.

Whether you want to post it for sale online or keep a set for yourself for Japanese Tea Ceremony time, these beautiful antiques will make a lovely addition to any home!