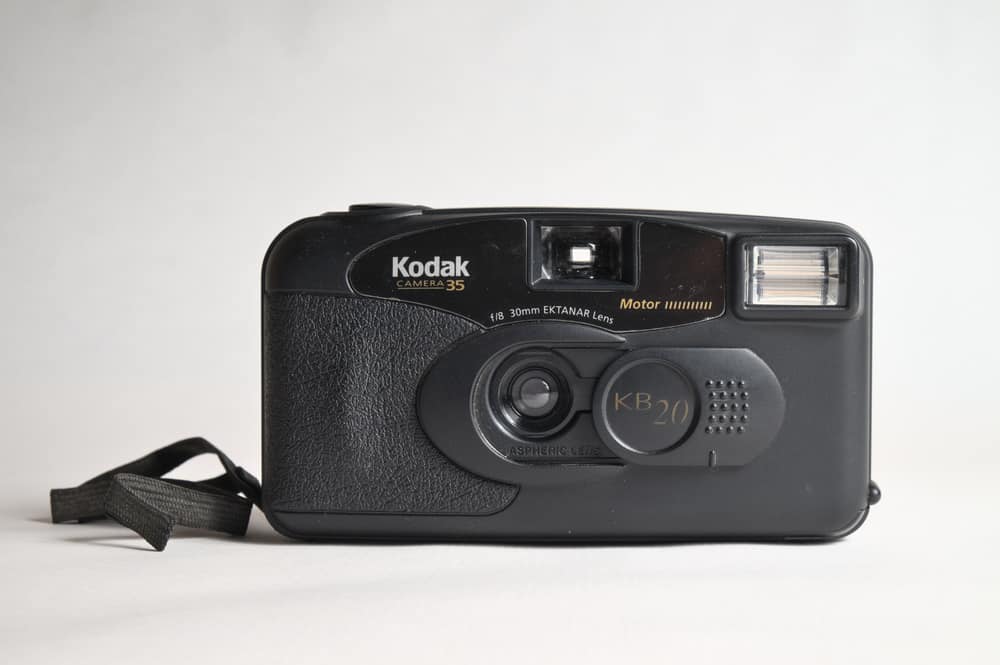 When people think of photography, one brand springs to mind – Kodak.

From the late 1800s, Kodax has become the quintessential camera maker. They have helped millions of people create lifelong memories, careers, and more.

And despite modern digital cameras, smartphones, and drones – nothing beats a classic. That’s why nowadays, old Kodax cameras are soaring in value.

Everyone from antique collectors to professional photographs, museums, and more are buying old Kodaks. And today we’re going to see just how valuable your antique can be.

In 1888, the Kodak camera was the most significant event in the history of amateur photography.

Originally, it was a simple box camera that came loaded with a 100-exposure roll of film. It was very cheap to buy and cheap to develop.

With the tagline “You press the button, we do the rest”, customers would simply use up the camera roll, and send the entire machine to Kodak.

The camera was reloaded and sent back with negatives and mounted prints for an additional fee. This business model revolutionized photography. It made it incredibly low-cost for ordinary working-class people to buy. It also created a strong revenue stream for Kodak, as cameras always needed replacing and processing.

Founder George Eastman had four basic principles of business, which propelled Kodak as the default provider of cameras:

By the 1930s however, professional artists and photographers, such as Walker Evans, began to see the potential of Kodak cameras as a way to document American life.

By 1975 Kodak had one growing problem – digital cameras. Although Kodak was the first to develop such a camera, they discontinued it over fears it would disrupt their main source of income – film processing. But the digital era was unavoidable. Sooner or later Kodak would have to adapt.

By the 20th Century, digital cameras became the main camera bought worldwide. These cameras had massively-reduced profit margins, and several companies entered the market. Kodak found it difficult to remain the top brand.

Perhaps because of how common cameras are nowadays with modern technology, this has helped reignite a huge interest in early film photography. As a result, old ‘vintage’ Kodak cameras have become highly sought after.

Nowadays, Kodak produces a variety of different cameras; from disposable film to cheap, everyday digital cameras, to professional SLR cameras and more. But ironically, it is their antique cameras that are some of the most in-demand right now.

The model of a camera is one of the deciding factors on how much it is worth. And because there are hundreds of different antique Kodak cameras out there, we have some tips on working out if you have early models or modern reproductions.

Luckily for us, many Kodak cameras have a model number printed on them, and it’s one of the core ways of identifying what camera you have. As with any antique, the older the model – the more valuable it usually is.

But with several models released in the same year, each with several variations, you may want more specific information.

This Kodak camera identification database has an extensive list of common models, including active auctions that can help you estimate the camera’s worth!

Dating from 1889 to 1895, the Kodak #1 was ironically the second camera made by the company. It came with the signature ‘You press the button; we do the rest’ tagline which revolutionized the photography industry.

Kodak #1 had noticeable improvements from the original, including a removable lens board and an improved sector shutter. Nowadays, this model is increasingly rare.

Introduced in the 1900s, the Kodak Brownie is another signature antique Kodak. Named in tribute to popular cartoon characters, the camera remained proved a popular buy for many families right up until the 1970s.

Like the #1, it was incredibly cheap and accessible to buy. It had a simplistic design similar to pinhole cameras and came in both box and folding styles. Although one of the more common antique Kodaks, a Brownie in good condition camera can still be highly valuable. 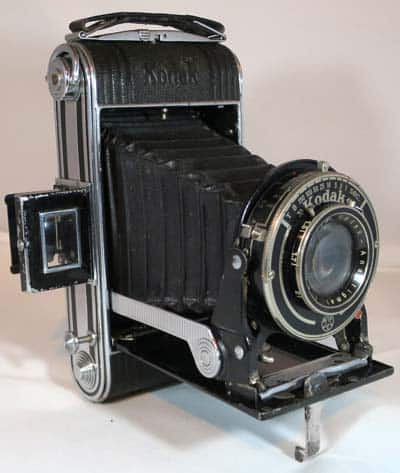 Produced in the 1930s, the Kodak Junior 620 was a chrome-based camera with an impressive 8 shutter speeds to choose from. Although produced with many variations, this model had a relatively short production life and was discontinued in 1939 – making surviving cameras very rare.

How do I date my Kodak camera?

Many Kodak cameras have a date code – making them very easy to identify. These are usually stamped on the inside of the camera or around its lens.

The date code is based on the keyword CAMEROSITY, with each letter standing for a specific number.

Find the data code and apply the above code to it. An example can be the serial number of an Instamatic 100 as YMOM, which translates to 0363.

But be cautious! Some cameras may have had parts replaced, including their lens or container. These new ones might have their unique dates!

How much is the original Kodak camera worth?

Now that we’ve established Kodak cameras are highly collectible and thus very valuable, it’s time to find out how much yours is worth.

The biggest factor that determines your Kodak’s value is the model.

Some models like the Kodak Junior were discontinued, and are in short supply. Although cameras like the Brownie were made in bulk for many decades, if the camera is in pristine condition it will be still worth a lot of money.

It’s pretty straightforward – the better condition your old camera is in, the more valuable it is. This listing of a Brownie Kodax is worth up to $1,825 because of the camera’s good shape.

Some photographers will buy old Kodak cameras to use them – so their functionality is important.

Is restoring an option?

Because many collectors want to use these old Kodak cameras, restoration is an option for you to increase your camera’s value and appeal.

But be warned – it is very difficult to restore old cameras, many of whom have complicated designs. You should only attempt to replace or fix parts if you seriously know what you are doing.

Some cameras also came in a leather case, which can also be restored to improve their appearance. That said, several professional services specialize in repairing vintage Kodaks. They can also source authentic parts for models and offer advice on camera care and value – consult these if in doubt.

With the rise of the internet, it’s easier now than ever to simply check prices. There are a few options for you to estimate your camera’s worth.

Once you have the model number, search for it using eBay. The auction site has current auction listings

Auction sites are a great way of checking out market values in real-time. A simple look at the auction database Worthpoint will show you a variety of auction listings, including what they sold for.

Some reference books are also useful in valuing your camera, and come highly recommended by both photographers and antique collectors:

How to sell and buy an antique Kodak camera？

You have several choices when it comes to buying and selling vintage cameras. Some Kodak specialist sites can give you a great idea of market value, demand, and more. Two of our favorites include:

Online auction sites are also very useful for antique collectors. They can also sell parts of cameras, allowing you to source authentic replacements to restore or repair your camera. Two of our favorites include: