However, many people overlook the impeccable craftsmanship and superb styles of American pottery. Lenox china is a prime example of fine bone china produced in the USA, and it is highly sought by experienced antique collectors.

What is Lenox China?

Lenox china is an American fine porcelain brand established in the last 19th century. It is the most prestigious American maker of dinnerware and the first USA fine bone china that was used in the White House by six US presidents.

Walter Scott Lenox and Jonathan Coxon Sr started a Ceramic Art Company in Trenton, New Jersey, in 1889. At first, this company was more of an art studio than a factory, as it produced one-of-a-kind artistic ceramic pieces.

In 1894, Walter Lenox took full ownership of the company and renamed it Lenox Inc. In 1897, Lenox ceramics were displayed in the Smithsonian Institution.

It wasn’t until the early 20th century, when separate dining rooms and guest parties were in vogue, that Lenox Inc. started mass-producing porcelain dinnerware. Lenox began producing elaborate and custom-made dinnerware in the 1910s.

The most well-known artists of the day were commissioned to design the plates at this time, when Lenox tableware was all the rage. After plates became a success, Lenox began to make complete dinnerware sets.

The Evolution Throughout The 20th Century

Lenox unveiled the first of its many renowned patterns in 1917. The “Lowell,” “Ming,” and “Mandarin” patterns were produced for more than fifty years.

Lenox porcelain was available for purchase as individual dinnerware items, three-piece buffet/place settings, and complete place settings of five pieces in the 1950s. The Brown-Forman Corporation acquired Lenox Inc. in 1983.

Lenox Inc. was sold by Brown-Forman Corporation to the manufacturer of collectibles Department 56 in 2005. Lenox Sales, Inc. submitted a Chapter 11 bankruptcy petition in 2008. In 2009, Clarion Capital Partners bought the Lenox Corporation’s assets and changed the business’ name to Lenox Corporation.

Up until 2020, when Lenox stated it would permanently halt production at the Kinston factory, this made Lenox the sole producer of bone china in the United States. It is anticipated that Lenox dinnerware production would soon resume abroad.

How to Identify Antique Lenox China?

Back stamps should be the first thing you check to identify vintage Lenox china. The producer and the age of a piece of antique pottery were determined by the marks on the pottery.

Harvey Duke’s Official Price Guide to American Pottery and Porcelain is a useful resource for collectors to date and identify Lenox china.

Pattern Codes And Their Meaning

You need to recognize a few prominent Lenox designs as well. There is a pattern code on every piece of Lenox that may be used to identify it. You can use a system on the official Lenox website to link such pattern codes with pattern names and other details.

Does Lenox China Hold Its Value?

Lenox china is fairly pricey both new and old, but the old pieces of Lenox china generally have the highest value, particularly if you find antique pieces in good condition. These items sell for upwards of $30,000 at their highest prices.

Today, however, there are lots of fantastic deals where several sets may be purchased for $500 to $1500. The condition, rarity, and market value of the Lenox piece will determine the price, as usual.

A collection of 1930s Gold and Ivory Ground Topographical Plates, for instance, sold in 2022 for the astronomical sum of $28,260,00. The majority of other sets may be purchased for cheaper, therefore let’s examine them and their appraisal values: 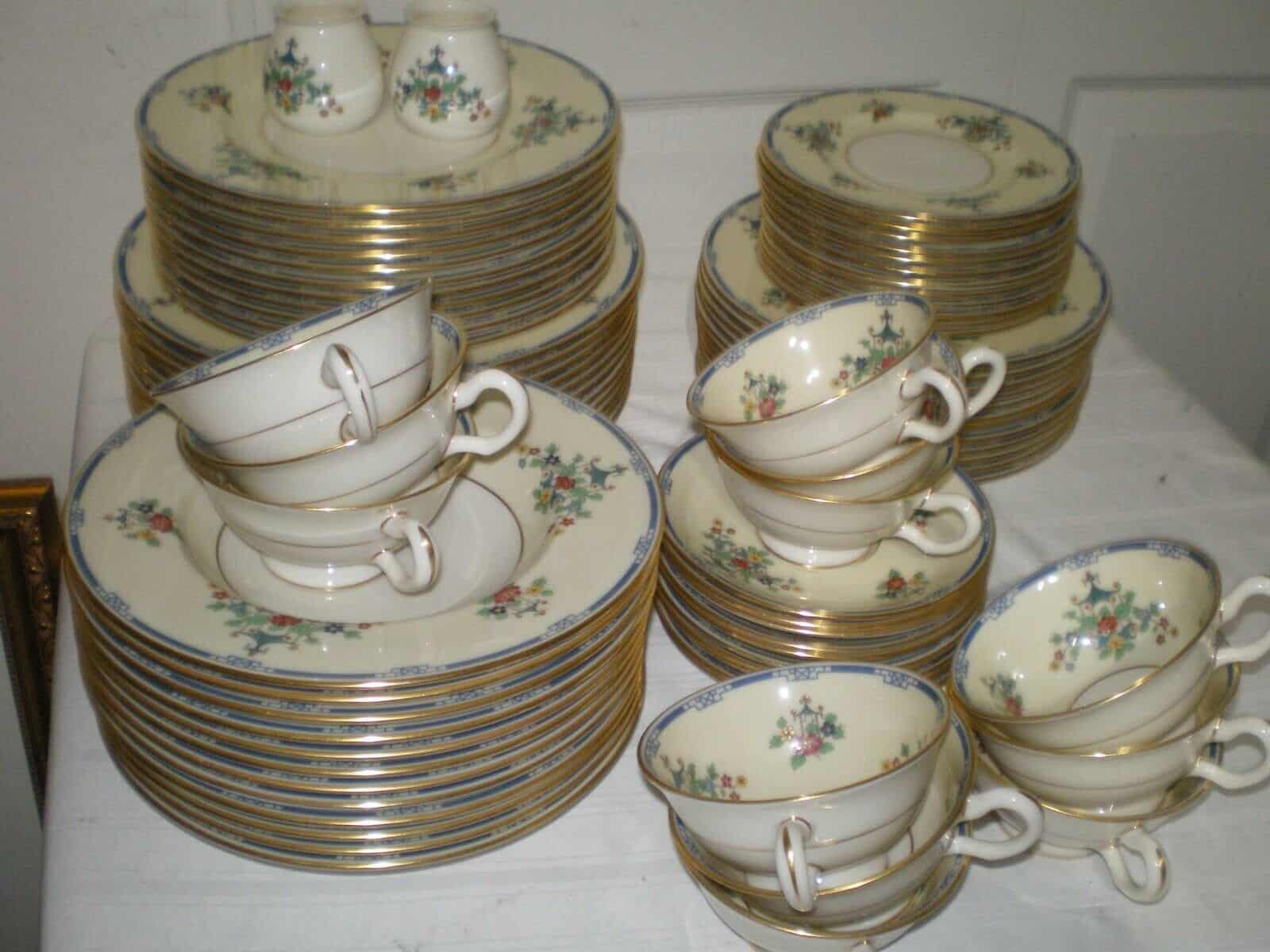 This 82-piece set has an ivory color and beautiful flowers. It is in excellent condition, and it can serve 10 people. The exact age is unknown, but it was made after 1953 because of its gold wreath stamp. The price of this set is $3,999.99. Each piece of this 64-pcs set is trimmed with 24k gold. The set is in a cream base color, decorated with mistletoe paintings. The exact age of this set isn’t provided by the seller, but it is certainly a vintage set and in a good condition. The price is $1,100.00. 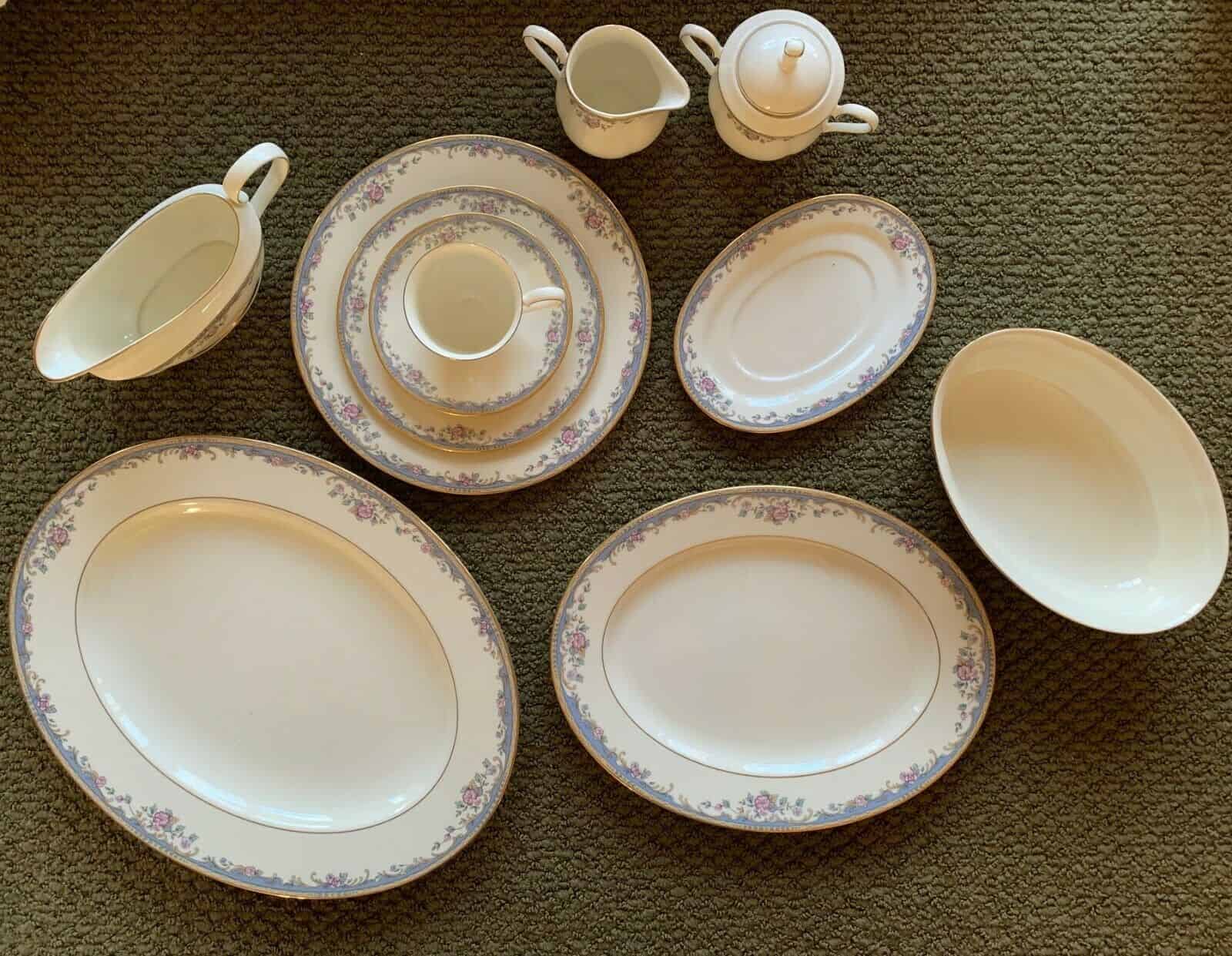 The dishes of this set come in a good condition, with only a few signs of wear and tear. The base color of the set is white, with beautifully painted flowers. The price of the set is $975.00. 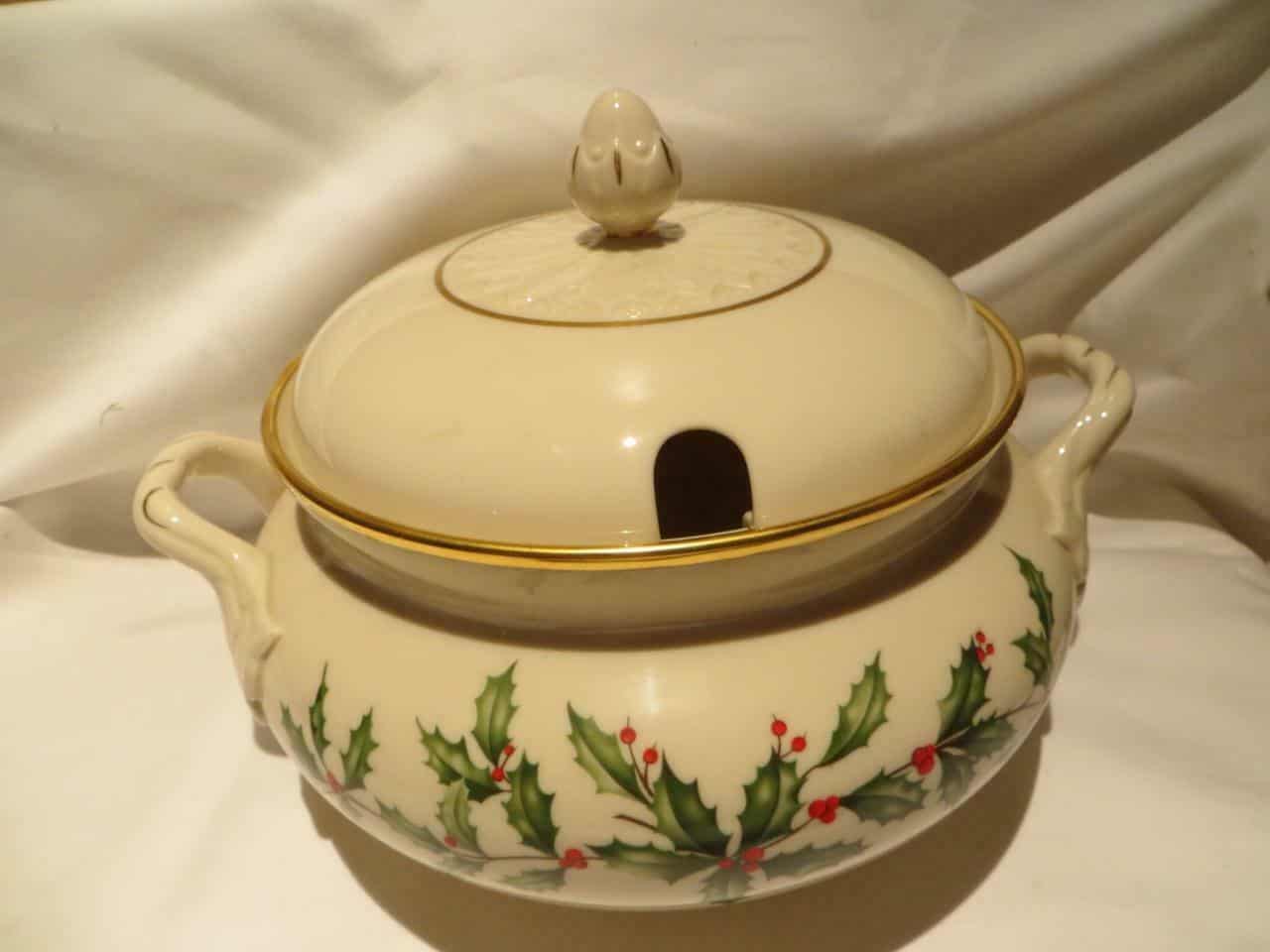 Another Christmas-themed Lenox china piece, this soup bowl was manufactured somewhere between 1980 and 1989, and it has gold trim. The price of this piece is $559.99. 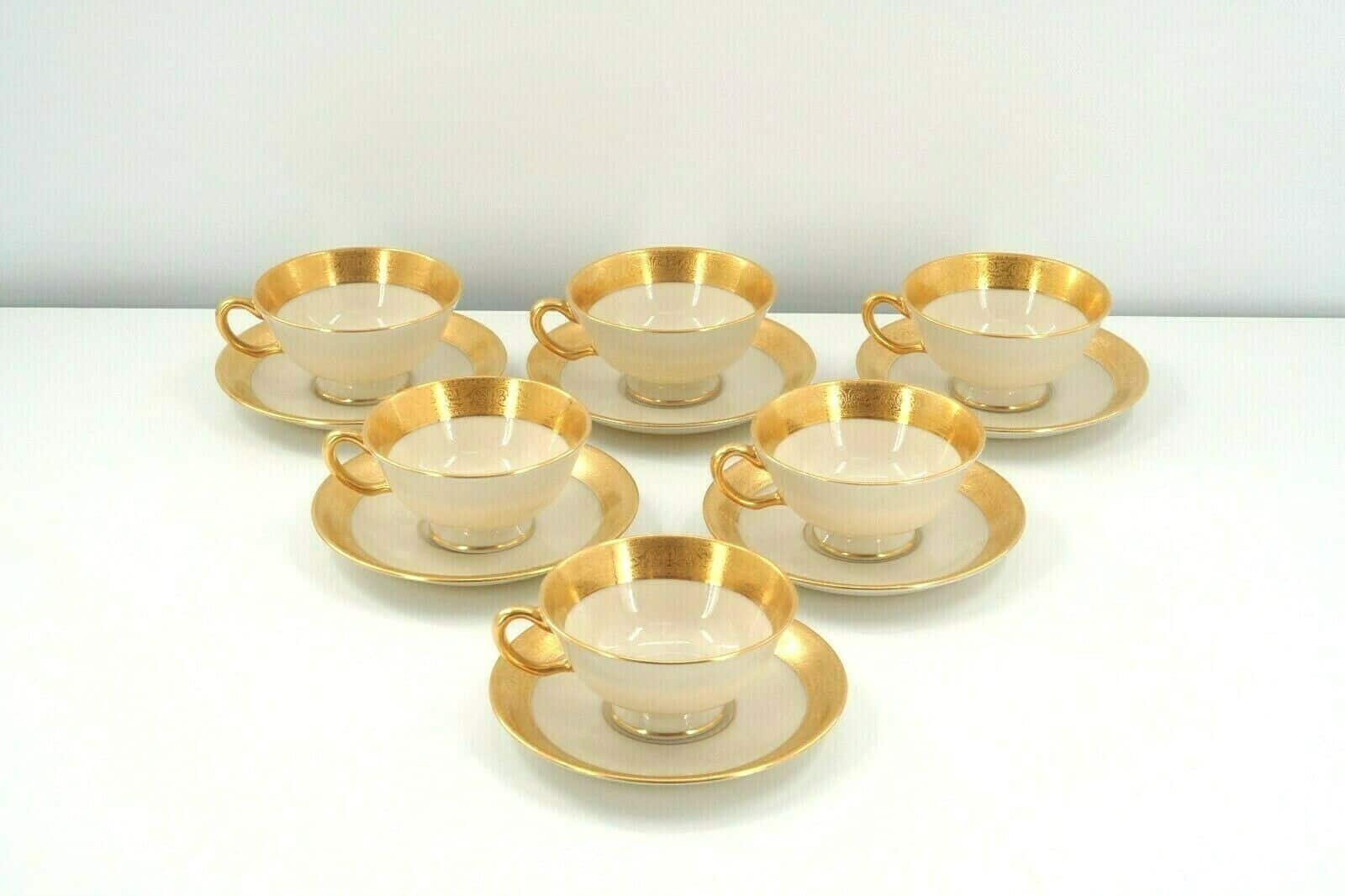 If you want a beautiful, fancy set for drinking coffee or tea, this Lenox Westchester set is perfect for you. Their color is ivory/gold, and there are no chips, crackings, or crazings. The price for this set is $550.00. This magnificent saucer set was commissioned by Tiffany & Co. sometime during the 1940s. It was the time when many luxury companies would commission dinnerware sets to be made by Lenox. Such was the dinner plate set in question. This set is white and cobalt blue with golden trims. Its price is $199.95. 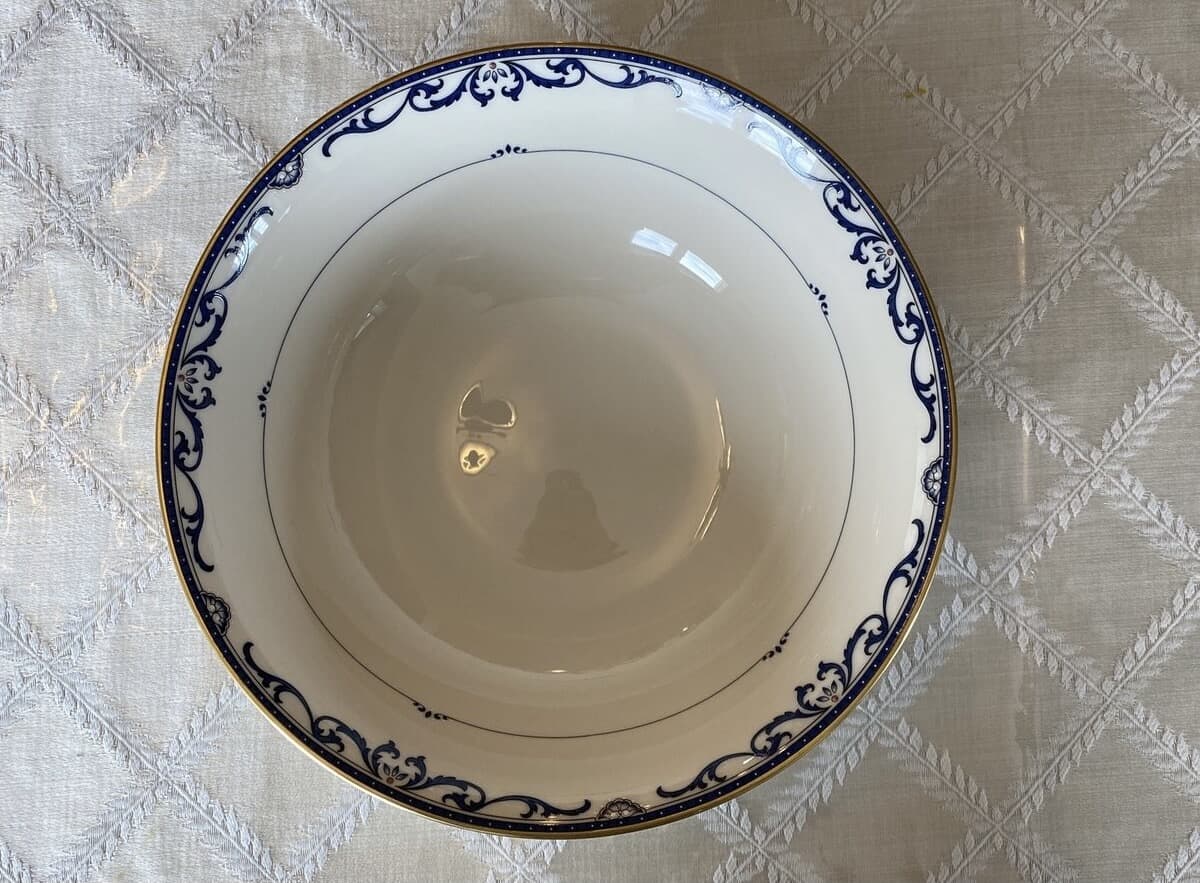 Perfect for collectors that only look for single items, this serving bowl was manufactured in the 1950s as a part of the presidential collection, in a Liberty style. The price of this piece is $99.99.

This set is the most affordable on our list, but it is just as beautiful as the more expensive sets. It is a part of The Accent collection, with a Monument Green pattern. The set is in excellent condition, although it shows 2-3 marks of wear and tear. The price of this set is $55.00.

In more than 130 years of production, Lenox had hundreds of patterns. Many of these patterns are discontinued or specific to one time period, which makes them even more valuable. And we list some notable patterns below.

If you want to start collecting vintage Lenox china, but don’t know where to start, here are a few useful tips:

Lenox china has a history of more than 130 years long. It was the first, the biggest, and the last US china manufacturer. What started as a simple art workshop grew into a large company that influenced so many other companies.

Today, Lenox china sets and individual pieces are worthy antiques, collected by many. Their high-quality and unmatched beauty is still widely appreciated among antique collectors, and the good thing is, that these sets are widely available to almost anyone.

Do you own any antique Lenox china? Do you still use it in everyday life or do you prefer to proudly display it? Share in the comments!