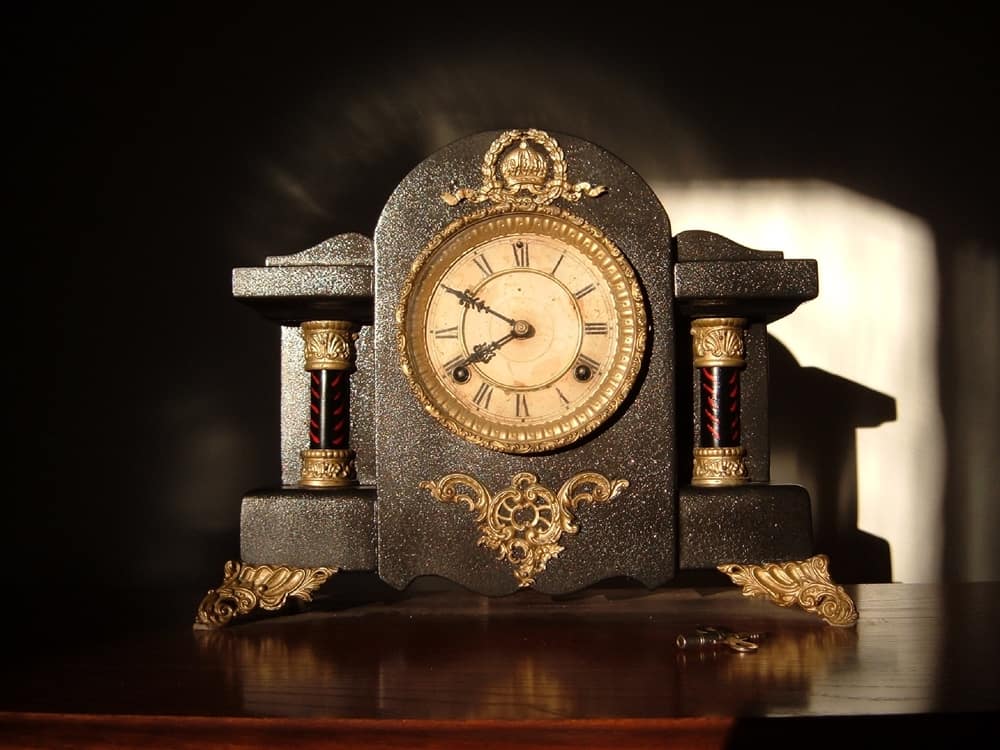 Mantle clocks are beautiful, ornate, and some of the most popular antiques around the world. With such a distinctive, classic look, they’re highly sought-after by collectors and interior designers alike.

With thousands of designs, styles, and makes, they are highly collectible, with some models easily reaching thousands of dollars at auction.

Every day, more models are rediscovered in thrift stores and yard sales and go on to sell for small fortunes at auction. So if you have an old clock on your fireplace, and are wondering if it’s worth anything, stay tuned!

Today, we’re going to explore in detail antique mantel clocks. From identifying your piece and dating it, to recognizing their important history, and most importantly, seeing how much they could be worth at auction!

History of the mantel clock

The name ‘mantel clock’ comes from where these small clocks originally sat – on top of the fireplace. The earliest records of them date back to 18th Century France.

These clocks were made with ormolu, otherwise known as ‘gilt bronze’, which gave them a beautiful golden shimmer.

One of the biggest selling points of mantel clocks was their size – they were much more compact than other timepieces of the time, including Grandfather clocks. Designs mirrored French styles of architecture and furniture.

It wasn’t until the 19th Century that mantel clocks became popular and available in America, and they became more popular as the Indsturai Revolution took the fold.

The Willard Brothers are credited as the first American clockmakers to make mantel clocks. Clocks were made of expensive materials, and as such were sold as a premium ornament. Only upper-class citizens could afford to buy them.

Clocks were made of wood, reducing their price and making them affordable to lower-income families. Over time, the clock face began to feature painted scenes. The structures may have also featured carvings, engravings, or sculptures.

Mantel clocks are an exciting antique to collect because of their rich diversity. Let’s first explore the different types of the clock; key wound mantel clocks and quartz mantel clocks.

Mechanical mantel clocks were often wound once a week to keep time or used a series of springs, gears, and pendulum to power themselves. They are generally much older than rival quartz mantel clocks.

The only downside to mechanical clocks is their timing. They aren’t as accurate as competitors, standing to lose 2-5 seconds per day. They also had an intricate inner mechanism that was often more difficult to repair.

These clocks were long-lasting investments for families; they were expensive but built to last. Many mechanical mantle clocks are still in mint condition.

Quartz mantel clocks are popular for many different reasons. Firstly, they never required winding to work. They also were more accurate and often had a chime feature that rang out at specific times of the day.

These clocks became popular at a time when mantel clocks were being mass-produced. They were much cheaper and easier to repair and replace. Clocks often ran for up to 20 to 30 years without any maintenance.

Some quartz mantel clocks were made from the 1930s onwards, making them vintage clocks rather than antiques – always check the fine details of the auction when making a purchase!

How can I tell how old my mantel clock is?

Mantle clocks have clues that can help you identify how old they are. Firstly, let’s take a brief look at some common design features of clocks through the ages.

Pre-1820s: Mantel clocks were mostly made out of wood, including all their movements, dials, and fittings. Common woods included oak, mahogany, and cherry wood.

The 1880s-1930s: Wooden clocks were often finished with black enamel to give them a more expensive appearance.

The 1890s+: Clocks were being mass-produced and became much cheaper. Makers experimented with materials, including porcelain and metal.

1896: Imported clocks had to have their origin country marked clearly.

The 1930s-1960s: Plastic such as Bakelite became popular. Clocks were made and sold cheaply. Art décor styles, including geometric shapes, were popular. This period means mantel clocks are vintage (under 100 years of age), and not antique.

Maker’s markers are any branding, logos, or signatures that tell you who made the clock, and when. Several clock companies have recognizable brands that make dating clocks straightforward.

Where are these marks? Common areas to look for a maker’s mark include:

Do remember that it was common for some retailers to stamp their products, too, and these should not be considered maker marks.

This Antique Clocks Price Guide website has over 38,000 photos of clocks and is very useful in identifying the most common maker marks on the market.

Although uncommon, you might just be lucky and have a clock with a serial number!

Serial numbers are found on the back plate of the movement and can tell you instantly when and where a clock was made.

Some well-known brands that used serial numbers include:

How do I identify an old style of mantel clock?

There are many different styles of mantle clocks. Some of the most important are: 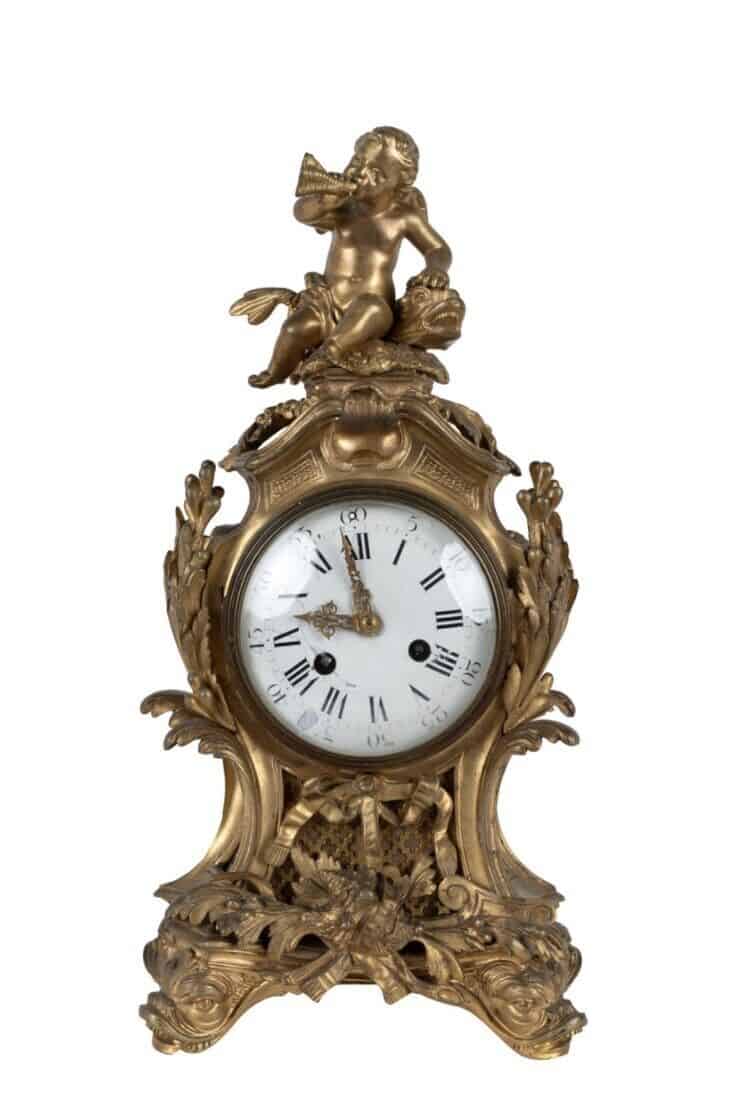 As we know, mantle clocks originated in France. These early timepieces are easy to identify because of their gilt-metal finishings and architectural style.

Angels and cherub sculptures were a common design feature, earning them the nickname the ‘cherub clock’, e.g. this Cherub Marin Life Vincenti Mantle Clock worth $550. 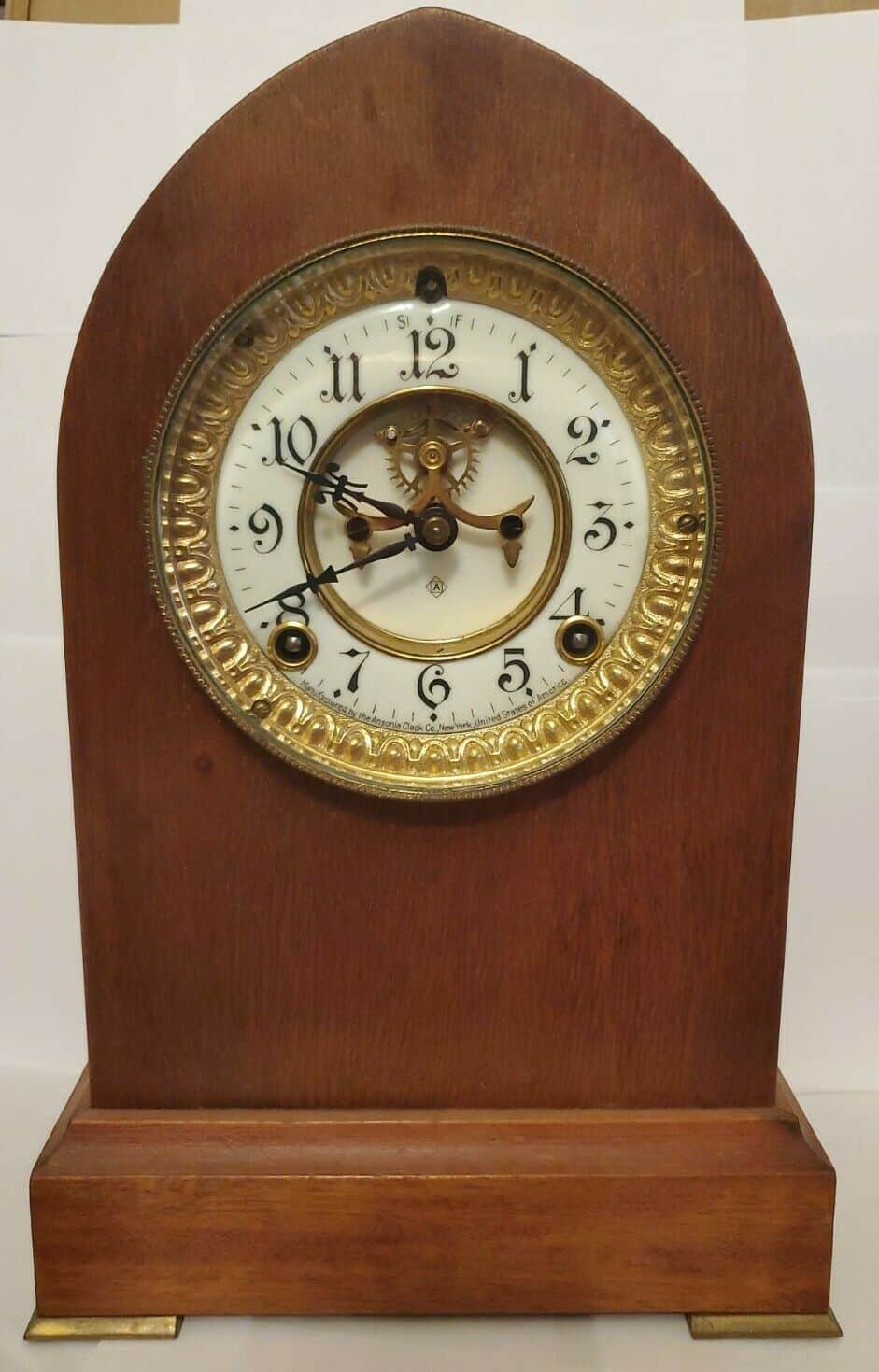 Most American mantle clocks were made of either porcelain, oak, or cherry wood.

Clock bases were made using solid wood, and were often engraved or carved. 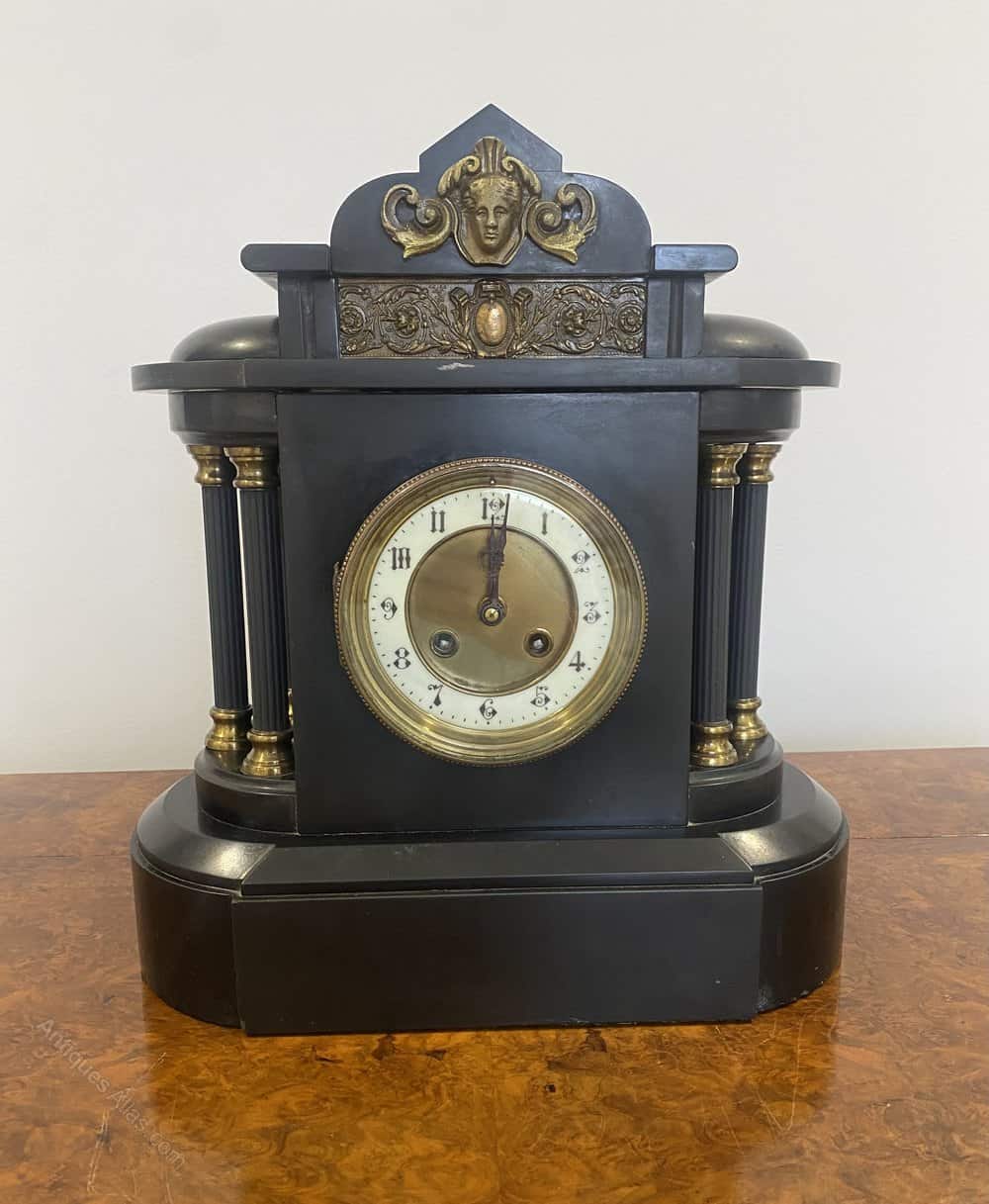 England was some years behind many of the trends of mantel clocks. Up until the 1800s, lantern clocks were the most common type of portable clock – some of which are considered incredibly valuable to museums. Bracket clocks were a type of mantel clock that became popular. They were made of wood and had a very distinctive shape to them.

Eventually, when England adopted the mantel clock as we know it today, they focused on molded edges with clocks sitting on top of bracket feet, and plinth-shaped bases. E.g. 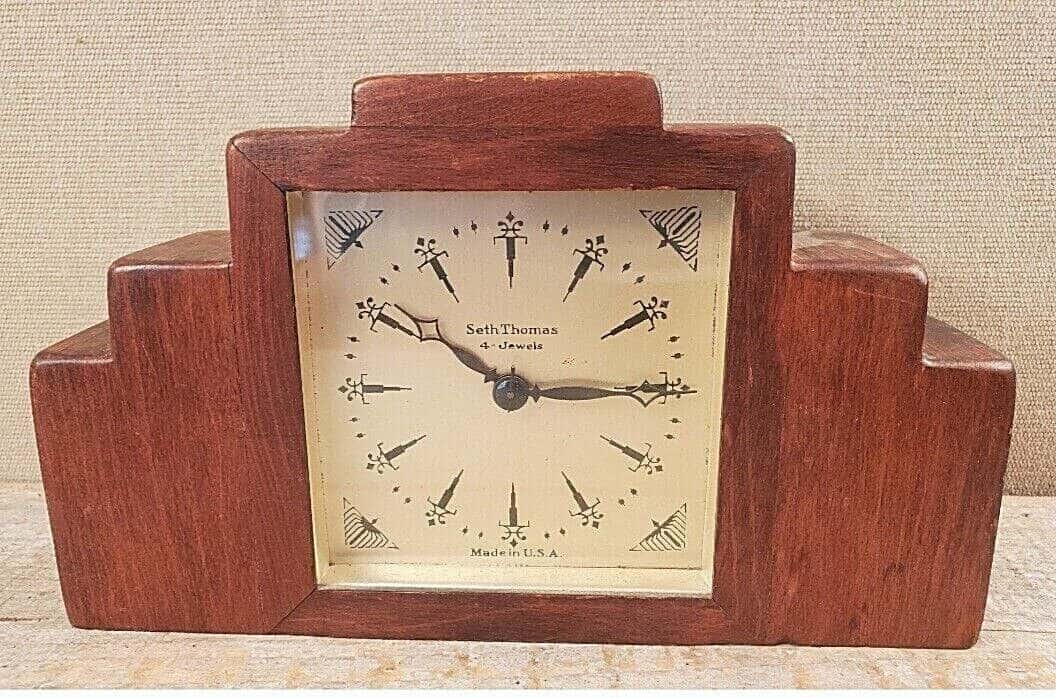 Combining modern styles with fine craftsmanship, art deco represented luxury, glamour, religion, and progress. Originating in the early 1900s in Europe, the movement took to America in the 1920s and 30s, where the style focused on chrome, stainless steel, and plastics.

Early Art Deco clocks can be classed as antique, though aren’t as valuable as other contemporary pieces. E.g.

How much is an antique mantle clock worth?

Antique mantle clocks are increasing in value all the time. But there are some features and models which are worth more than others.

Clocks from well-known manufacturers will be much more interesting to potential buyers. Lesser-known brands will not be that interesting and sell for less money.

Some clocks are sold with no manufacturer information at all. As the examples below will demonstrate, this can dramatically reduce their value.

Our advice? Do your homework and identify and verify your clock before posting a listing. Some luxurious brands to be mindful of are Seth Thomas clock Company, Jaeger-LeCoultre, Waterbury, Bailey Banks & Biddle, Howard Miller, and Ansonia, to name but a few.

Because they are highly decorative antiques, the design and style of your mantel clock can be one of the deciding factors on its value.

Of course, this can depend on a collector’s tastes. But generally speaking, high-quality materials and unusual designs are worth more than generic-looking clocks.

Although they’re mostly an ornament, mantle clocks that can still work are worth more. It’s usually a sign the clock is in great condition.

Two similar models can have drastically different values, depending on if they work or not:

Looks are very important with any ornament antique. If your mantle clock looks pristine, has retained its colors, and shows no wear and tear, it will be worth more money.

However, if it has scratches, scuff marks, cracks on the clock’s accents, or discoloration and signs of repair and restoration, this may impact its selling potential.

Generally speaking, most if not all auction listings for antique mantle clocks describe them as being in either ‘Mint’ or ‘Excellent’ condition.

Additionally, if your clock has a distinctive or unique shape that sets it apart from other known styles, it will surely attract a lot of attention…and money! E.g.

This 20th Century Wrought Iron Mantel Clock from Germany has a unique ‘wartime’ shape, worth $2,414.

Chimes can have massive appeal for collectors and interior designers alike. Some play popular pieces of music, from religious hymns to orchestral symphonies, and vary in style, shape, and how regular they play.

One of the most popular styles is the cuckoo clock, which became very popular across America in the early 1900s. This German Mantle Cuckoo Clock runs every hour & half-hour and is worth $2,500

Where to buy, sell, and price check antique mantle clocks?

They offer everything from clock appraisals and valuation, to buying and selling through a private auction.

Collector’s Weekly has an extensive archive of mantle clock listings, giving you lots of information on what sold and how much for.

1stDibs has many priceless antique mantel clocks, with prices reaching thousands of dollars. Reserved for rare and one-of-a-kind auctions.

The Clock Depot has a mix of ordinary and rare auctions. Each sale has useful information about model numbers, and specs and includes photographs.

eBay is a popular auction site with hundreds of new listings every day. Pay attention to the dates – many sellers mistake vintage clocks with antiques!

Etsy has a budding clock community with a range of antique and restored mantle clocks for sale.