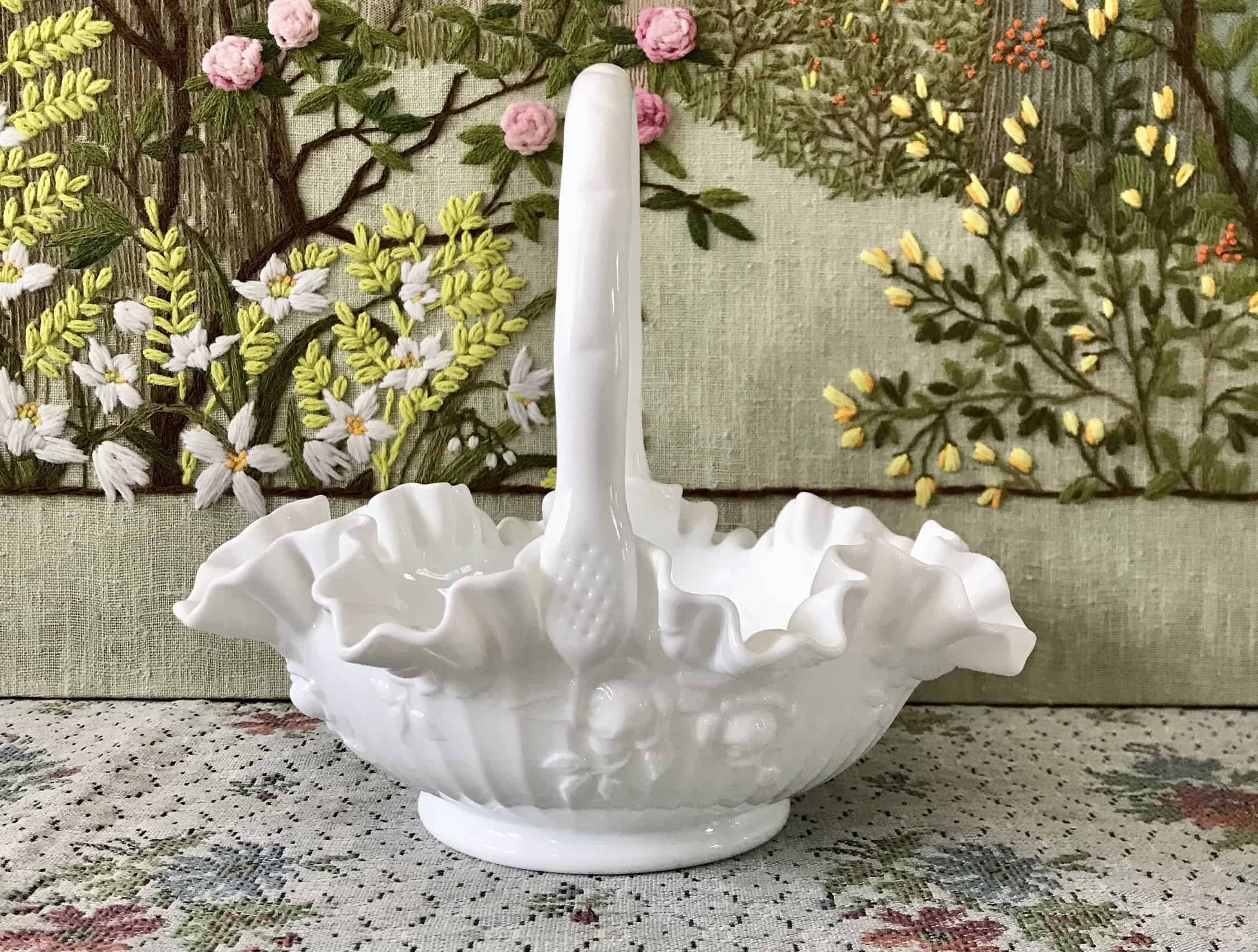 Their use is very widespread in house design, and they are ideal for storing flowers due to the enhancement that the whiteness of the glass may provide to a floral arrangement.

Not only are they popular objects, but they also have a long history, a wide range of styles, and several well-known companies who have committed themselves to producing them and continue to do so now.

We hope to give you all of the required information in this post so that you can learn everything there is to know about these beautiful objects.

You’ve come to the right place if you’re interested in becoming a Milk Glass collector or learning more about the market’s value and currency.

Whether you’re a professional or just curious, you’ll learn everything you need to know to purchase, sell, or build your collection of antique milk glass baskets by the end of this article.

Milky glass was created in Venice, most likely on the island of Murano, where all of Italy’s top glassmakers resided.

All glass workers were required to set up shop on the island of Murano, which belonged to Venice at the time, by law in the 16th century.

This law was introduced for two reasons. The first was to protect citizens from potential accidents in craft workshops. It’s important to keep in mind that they dealt with high-temperature melting furnaces and volatile chemical compounds, so accidents were common.

The second purpose was to safeguard the many skills and secret formulas created by Venetian glassmakers of the period. Italy became a global leader in glass production, and master glassmakers created techniques that are highly respected and desired by the entire world.

As a result, it was ordered that all glass artisans could not leave the island of Murano. Anyone who dared to break the law was sentenced to death.

This white translucent glass emerged from Murano glassmakers’ desire to create a material that resembled the world-famous Chinese porcelain of the time, which was exclusively available to the upper classes and royalty at exorbitant prices.

Opal glass was the name given to it at the time, and while white is the most well-known and distinctive color, it is also available in pink, blue, black, brown, and yellow.

Opal glass has that translucent characteristic thanks to chemical compounds used for its manufacture. Tin dioxide is used as an “opacifier”. It also contains other compounds such as arsenic, antimony, and bone ash.

The creation of microscopic crystals as the glass cools is what gives it its opacity. Other formulations, on the other hand, can make the glass opaque from the moment it is melted to the time it cools.

Milk Glass is a much more modern name, and this is because opal glass has gone through different periods of popularity over the centuries.

It’s possible that the expression “Milk Glass” was coined during the Victorian era when it was most popular.

This corresponds to the popularity of Chinese porcelain during the period, which was always more expensive. Opal glass, on the other hand, was a great alternative, and its lower cost made it popular in other social classes.  It was not exclusive to royalty or people with high purchasing power anymore.

Opal glass reached its peak of popularity at the end of the 19th century and the beginning of the 20th century in this way, and many companies across Europe and the United States began to produce it.

It spread around the world from 1940 to 1970, and it is no longer a premium item only a few can buy. Milk Glass in different sizes and forms have been produced for the middle class since the industrial revolution.

By the 1980s, their popularity had faded, and they were nearly extinct for approximately 20 years, but in the early 2000s, a new retro wave resurrected them, and many collectors began to buy them.

It is still popular today, and they are ideal products to begin collecting with because they are relatively easy to acquire, come in a variety of styles and designs, and are reasonably priced.

They were part of the decoration of almost all middle-class houses in Europe and especially in the United States, where they were widely accepted and a considerable number of American factories began to produce them.

John and Frank Fenton founded Fenton in 1905. They started the business in Ohio and initially focused exclusively on painting white glassware.

The company relocated to West Virginia and began producing its glassware, which gradually garnered recognition and the company prospered quickly.

They worked not just on milk glass, but also carnival glass inspired by Steuben and Tiffany.

Fenton glassware was dubbed the “poor man’s Tiffany” because its imitations were quite good and the price was far lower and more reasonable than Tiffany’s original pieces.

Milk glass baskets were Fenton’s specialty, and they were made by blowing the glass into hand-carved molds. After they had cooled, they were reheated so that the artisans could give them the finishing touches and the excellent finish that this brand is known for.

Fenton had been in operation for nearly a century before being dissolved in 2011. His milk glass baskets are in high demand and are available for purchase on the collectors’ market.

This is another of the great American companies that operated for almost 100 years. It was created in 1907 and closed its doors in 2002.

They had their main headquarters in Dunkirk, Indiana, and were characterized by making opal, Carnival, and Depression glass.

This Pittsburgh-based corporation had been in operation for nearly a century. It was a pioneer in its field, opening in 1889 and closing in 1984 when milk glass production had declined and its popularity had not reappeared until the beginning of the year 2000.

During the time of the Great Depression, they stayed afloat by selling glass milk and experts agree that their glass is among the best quality of the time.

Most pieces from this manufacturer have lost some value in recent years, however, collectors still admire some uncommon milk glass pieces, such as children’s toys.

These milk glass baskets were made by hundreds of different companies. The following are some of the best and more popular firms:

If you’re interested in collecting milk glass baskets, keep an eye out for platonite glasses.

Since 1936, the Hazel-Atlas Glass Company has patented and manufactured platonite glasses. Their use, however, dates back to the 1920s.

The fundamental distinction between milky and platonite glass is the degree of translucency.

Milk glass will always be more translucent, and platonite products will normally have the “HA” mark at the bottom of the item, which is the initials of the firm that made it.

These are some features to consider while determining the value of milk glass baskets, whether you are a buyer or a seller.

It can be challenging to appropriately identify value baskets, but here are some pointers to get you started:

We hope you found this article to be useful. The baskets, with prices ranging from $20 to $40, are ideal pieces to start a collection. Only a few rarities cost more than a few hundred dollars, and they come in a wide range of forms and shapes.

Always remember to educate yourself before making a large investment, and go through this guide again to recall the qualities of these pieces, the manufacturers, and how to assess their market value.