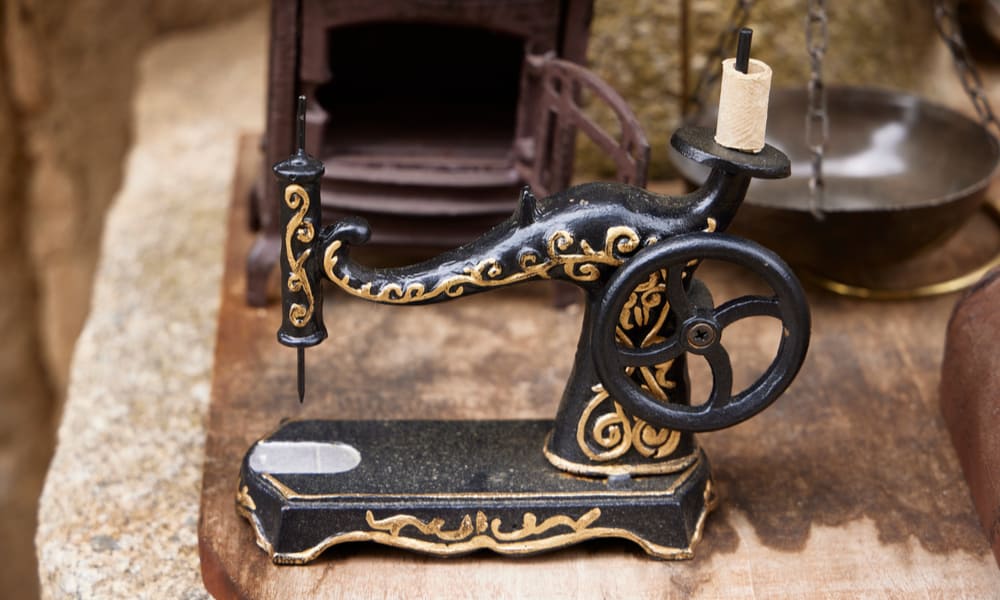 Antique miniature sewing machines are actually only small-sized regular sewing machine versions. People used them for sewing during WWI, but their primary function was to allow kids to learn finer sewing skills and design pieces of clothing on their own.

You should operate most of these models by hand crank, making them an excellent option for working during a power outage and while traveling. Besides that feature, these toy devices have all characteristics like more sizable models but can save precious space in small apartments.

What Is a Mini Sewing Machine? 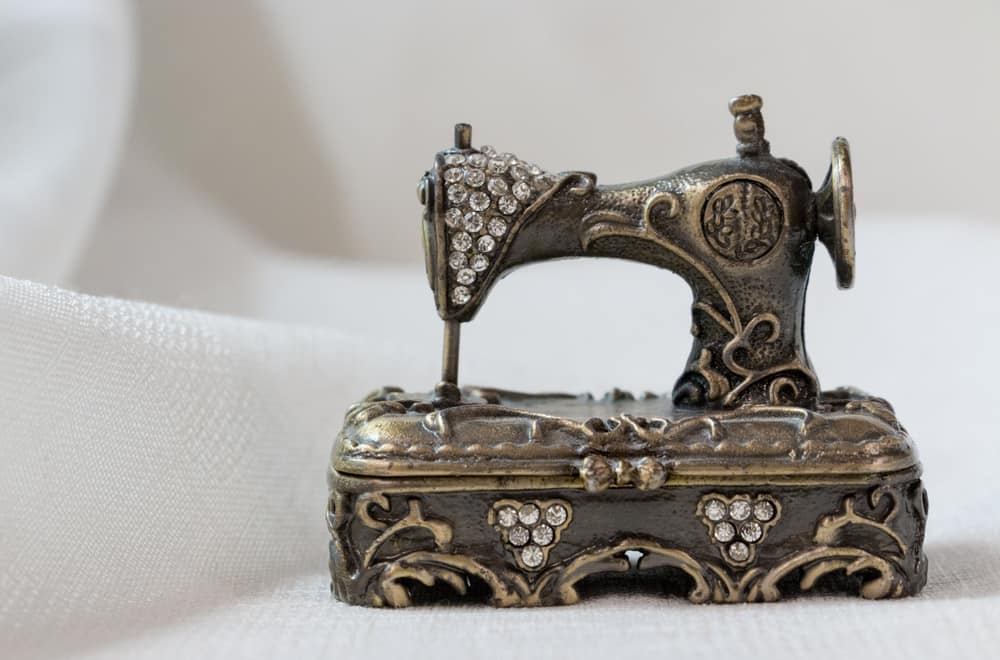 Although many people are not aware of it, mini sewing machines are not models. They are actually smaller versions of regular sewing machines, and you can use them for the same purpose.

Most models are designed as toys to teach children how to sew and create their own projects. However, you could find these tiny machines made during challenging times of material scarcity, particularly during periods of two World Wars.

Manufacturers found a way to pack all necessary components into smaller models without compromising their functionality. Since they were run manually, these toy models were particularly convenient when electricity was unavailable for any reason.

Thanks to hand-crank operating, they were also an excellent option while traveling. Most women used them to sew basic things and simple clothing items when they were not at home.

Even though the only difference between regular-sized devices and miniature machines was only in reduced size, it was impossible using them for real sewing like classical models. For instance, it was impossible to use them to sew complicated pieces of clothing. 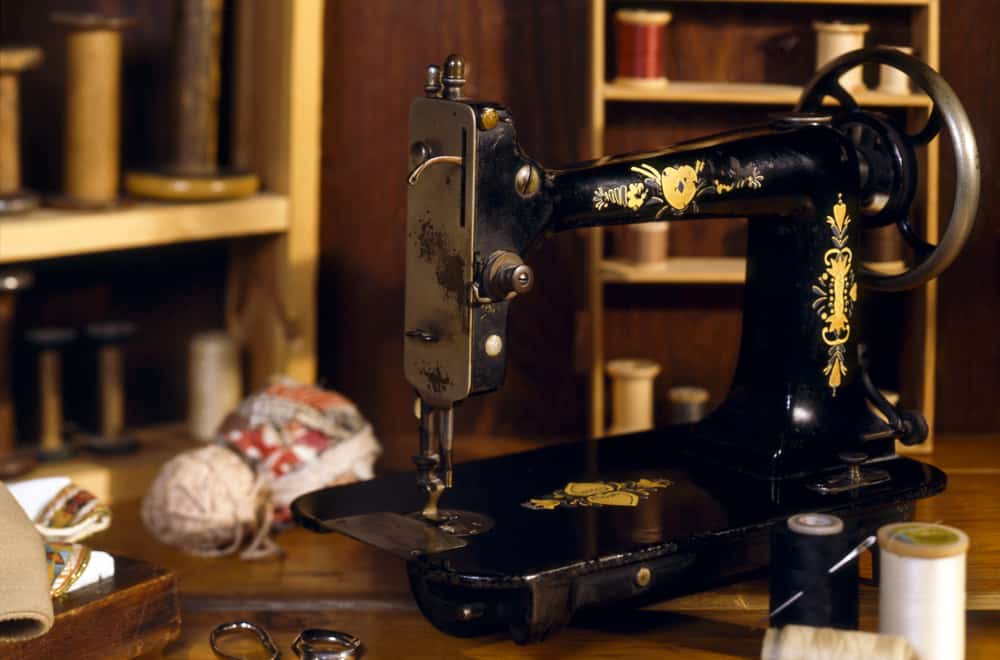 Englishman Thomas Saint invented the sewing machine in 1790 and officially patented it. Unfortunately, his design failed in the patent stage, probably because of poor advertising.

On the other hand, many inventors across Europe filed their patents from 1804 to 1842 and improved the primary model. Then, talented John Fisher collected the best ideas and innovations and integrated them into the new sewing machine design in 1844.

Unfortunately, he failed the patent filing appropriately, and Elias Howe did it after creating a similar model the following year. The only difference was in the vertical fabric addition.

Isaac Singer came on the scene six years later after copying Fisher and Howe’s ideas. Unlike Fisher, Howe successfully filed his patent and gained $1.50 on every produced Singer machine after winning a court case.

After the so-called Sewing Machine Wars, exhausting, five-year-long intellectual property theft in the sewing machine industry, the top four American brands formed a conglomerate in 1856. The agreement included Singer and Howe’s inventions and their individual patents.

In the end, the new conglomerate started charging $15 per each produced sewing machine to other companies with the same business ideas. That last by 1887, when their patents expired.

Two years later, Singer found a way to design a new sewing machine and simplify the sewing process. He learned from other people’s mistakes and spent over $1 million on advertising annually.

The result was impressive. By 1918, most American homes and industry parts had electric sewing machines that Singer designed.

He also invented an astonishing number of sewing machine types. The list included toy types for children and miniature models convenient during wartime and the impending Great Depression.

What Makes a Sewing Machine Antique or Vintage? 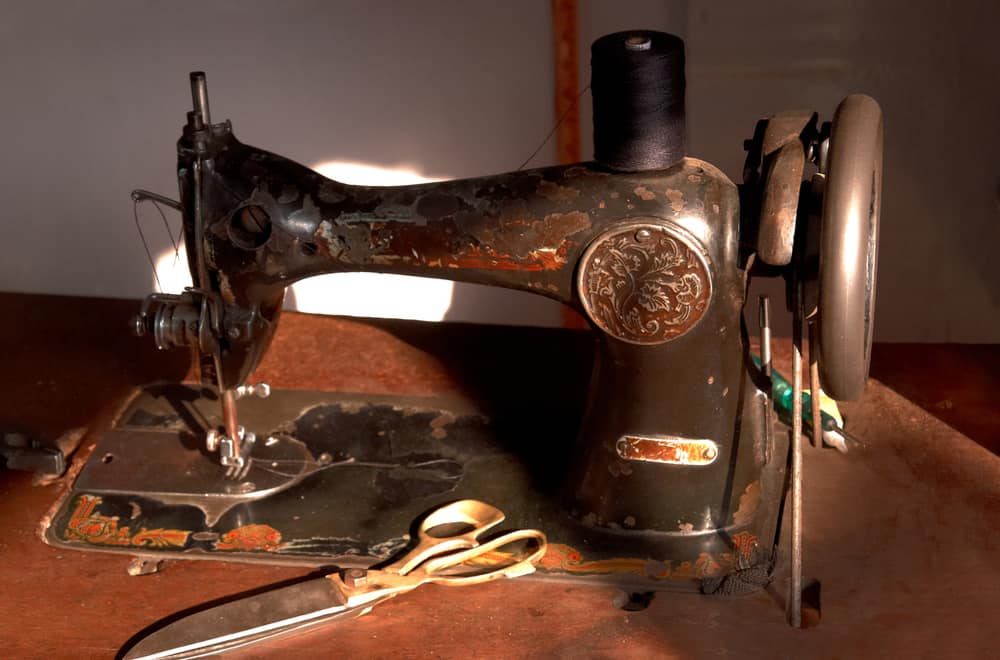 Collectors consider sewing machines made before 1920 antique, but experts claim that only those created before 1900 can be in this group. So, those designed from 1900 (1920) to 1970 are vintage. Those produced in the 1980s often incorporated circuit boards, making them modern.

You can recognize antique sewing machines based on several crucial characteristics, including:

The rule of thumb is that you can sew only straight stitches on both antique standard and miniature machines. It is a bit limiting feature, but these models have other advantages.

For instance, these devices are durable and dependable and can stitch through thicker fabrics than modern ones. Amazingly, even the oldest models can still create straight, precise stitches.

Most antique sewing machines were treadle-operated and came with a cast iron body or were mounted on a wooden table.

As I have already mentioned, early sewing machines could create only straight stitches. However, 1960s zig-zag models like Kenmore 30 Stitch, Singer 401, and Singer 403A featured hook systems or flat rounds (cams) that allowed stitching pattern creations.

Most old sewing machines invented before every home got electricity used treadle (foot peddle) that allowed turning a flywheel. Other models used a hand crank, but the working system was the same. The device got the power thanks to external action. 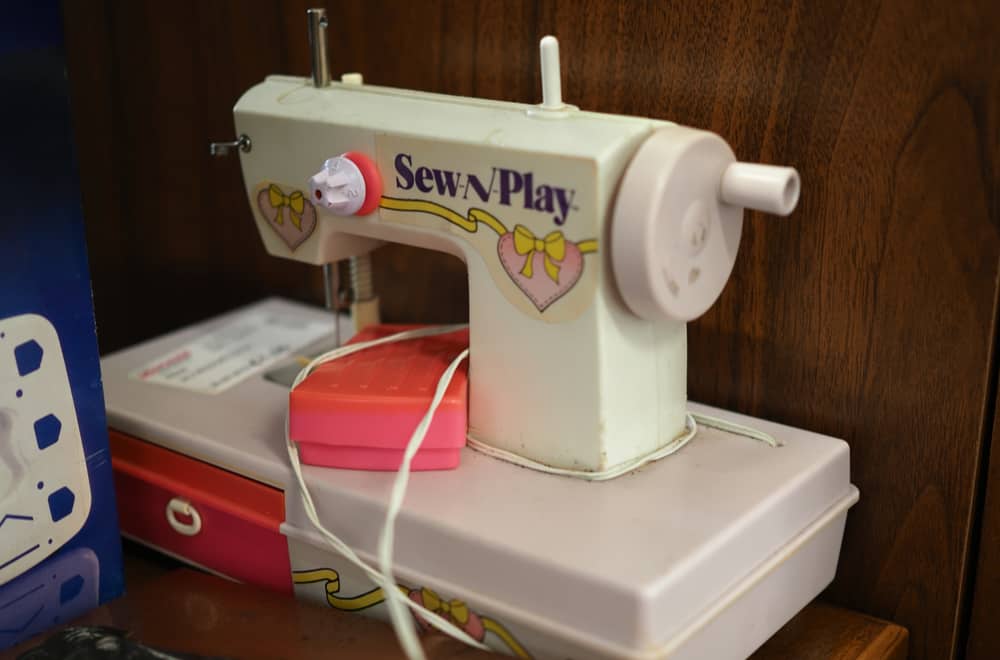 It is crucial to date an antique miniature sewing machine before purchasing. The vital things to check are serial and model numbers.

The first step is to find these numbers. The best option is to have the original owner’s manual with all necessary information, including the production year. On the other hand, most manufacturers have their websites or provide online registries for comparing models and production years.

As you can guess, Singer has the most comprehensive online database with all the necessary information. If you want to check a less popular brand model, it is required to ask a question on the forum. Remember that it is always better to share a machine picture, and someone can recognize it.

Another option implies Google image search and comparing your miniature device with available models. Finally, you can pay for an official appraisal to determine when your machine was manufactured and its estimated price.

Since several manufacturers produced these practical models in the early 20th century, you can also determine their age by brand name.

For instance, tiny Stitchwell sewing machines with a practical hand crank mechanism were an excellent example of beautiful miniature cast-iron models produced in the 1920s.

The National Sewing Machine Company created the model with a clamp, allowing sewists to attach it to a table. You can date their lovely pieces in a period from the 1890s to the 1920s.

The value of antique mini sewing machines depends on a few factors, similar to standard size models from the same period. The most pricey are scarce models from the early 19th century in the best possible condition.

Even though you have probably heard a story about a precious clown-shaped model sold for $13,600 at auction, most miniature sewing machines are pretty inexpensive.

You can buy most miniature sewing machines produced in the 20th century for tens of dollars. On the other hand, pieces designed at the turn of the 19th and 20th centuries typically cost  $300 to $500 on average.

Keep in mind that antique Singer mini sewing machines are the most collectible, and it is hard to find a piece in excellent condition for less than $200. Models of unknown brands are more affordable, and you should set aside about $20 to $50 for one.

If you like buying things online, the best places to find an antique miniature sewing machine are sales websites, such as eBay, Amazon, and Etsy. The incredible thing is that you can find many devices that way.

The downside of this solution is the inability to check the machine on-site and the need to rely on photos. Plus, the shipping fee is often high, particularly when you buy a heavy model containing wrought iron parts.

The best options you have when you prefer seeing the device before purchasing are:

This purchasing way requires visiting various stores where the choice is typically limited. On the other hand, you can see the model you want to buy, and there are no additional shipping expenses.

Numerous companies produced miniature sewing machines. As you know, the most popular manufacturer in the US is Singer, and models with this brand sign are highly collectible.

Singer – An excellent thing about purchasing Singer antique miniature sewing machine is available parts necessary for possible repairing. Another benefit is reasonable prices. Except for a few expensive collectible models, you can buy most antique pieces for about $200.

The most incredible antique miniature sewing machine with this brand’s markings is Singer SewHandy, produced in 1910. It came in two variations, black Model 20 and tan or white Model 50-D.

Muller – Their brand miniature sewing machines with hand cranks were similar to Singer models. However, they were always black and with a plainer design.

National Stitchwell – Their toy sewing machine version was black with the Stitchwell inscription on the body.

KAYanEE – Antique miniature sewing machines produced in this company came in lovely candy colors. You should pick out one of their models if you look for a beautiful device for display.

Essex – Hand-crank operating miniature models this company produced always came with a wooden base and a carrying case.

German manufacturers – It is possible to find numerous miniature and toy sewing machines designed in Germany on the current market. They are always of high quality, and among the most beautiful antiques you can find.

Sometimes it is hard to choose between numerous mini sewing machine designs and colors. The standard models are typically black, but you can also find ornately painted ones and those with attractive decals.

It can be tricky finding one in decent condition nowadays. You can display it as a decoration, but it is possible to use it in the same way as the big one if it is in working condition and has all the parts.