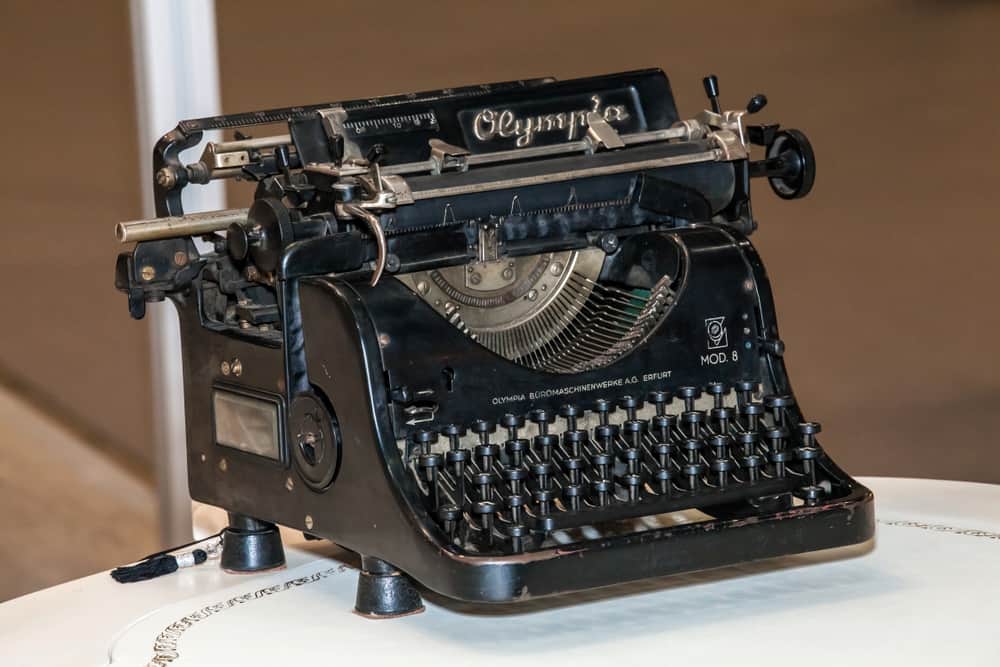 Vintage typewriters have always been one of the most popular vintage items. Most people buy them for their aesthetic as decorative pieces. Others enjoy the typing experience of old typewriters despite living in the day and age of computers.

One of the most famous typewriter brands was Olympia. Despite not being in business anymore, Olympia typewriters were prevalent during the mid-20th century and are still very popular among typewriter enthusiasts.

Do you want an antique Olympia typewriter for your collection? Perhaps you found an old typewriter from Olympia and want to know if it’s valuable? In any case, you’re in luck!

In this article, we’ll thoroughly examine the history and the different typewriter models that Olympia produced. We’ll also help you identify an antique Olympia typewriter and determine its value.

Keep on reading to learn more about antique Olympia typewriters.

The History of Olympia Typewriters

Olympia’s history begins in 1903 with its parent company AEG. AEG decided to capitalize on the increased demand for typewriters and produce its own model. This first typewriter came out under the name Mignon but was largely unsuccessful due to its high cost.

However, Olympia was one of many brands heavily affected by World War II. The Olympia factory in Berlin was taken over by the Soviets, with some employees fleeing to Wilhelmshaven, West Germany, and re-establishing the company in 1948 under the name Olympia Werke AG.

The popularity of Olympia typewriters reached its peak during the middle of the 20th century. In fact, Olympia was often regarded as the “Mercedes Benz of typewriters”. Therefore, it’s no surprise that almost half of the typewriters in Germany during the 1960s were made by Olympia.

Some popular lineups from Olympia’s catalog are the SM series and the SF series, which became famous both for their looks and functionality. Moving into the electric typewriter era, during the 1970s, Olympia continued to produce high-quality typewriters.

Eventually, as typewriters began to fall out of favor with the general public, Olympia’s brand name started to fade. The brand officially ended its operation in 1992.

Several famous individuals have owned and praised Olympia typewriters. American writer and film director Woody Allen used his Olympia portable SM3 to write all his screenplays for over 50 years. Also, famous author Paul Auster wrote an entire book about his favorite Olympia typewriter titled “The Story of My Typewriter”.

The Models of Olympia Typewriter

Olympia has produced numerous excellent models throughout its long history. Some of the most popular ones are:

The SM models are by far the most well-known vintage Olympia typewriters. These portable typewriters have accompanied many people, including famous individuals, for multiple years. The story of the SM series begins with the Orbis model, which was Olympias’ portable typewriter before the brand had fully acquired the rights to its name.

Ultimately, the first SM model was released in 1949. The SM 1 Portable was very compact and efficient for its time, but it did lack a tabulator. It originally came out in basic colors like black and cream, but, eventually, more bold colors were added to the lineup.

The SM1 was succeeded by the very popular Olympia SM2 and Olympia SM3 models. The SM3 Portable was also the first to feature a tabulator with manual stops. These models are still considered some of the best manual typewriters today. The SM series continued until the Olympia SM9, which was in production until the 1970s.

When the first SF model was released in 1956, its compact design and advantages of portability made it one of the most highly sought-after typewriters of its time. While the SM models by Olympia were already portable machines, the small size of the SF series made it possible to carry it with you and use it anywhere you want.

Other than the size, the design of the SF models was not that different compared to the SM models. What’s unique about the SF models is their margin release key which could also be used to return disarrayed typebars to their initial position.

On the other end of the size spectrum, there are the Olympia SG typewriters. The SG series first came out in 1953, and its purpose was to be a typewriter for office use. Thus, it was huge and had a robust build.

The model SG1, in particular, was one of the most popular manual typewriters for office use during the 1960s. In fact, this model was the one that earned Olympia the nickname “Mercedes Benz” because it was a true workhorse.

The SG series continued its production well into the 1970s and 1980s. During that time, there were also the SGE models, the first electronic typewriters by Olympia. In particular, the model SGE 50M Excellence was prevalent in offices during the 70s.

How Do I Identify an Antique Olympia Typewriter?

If you found an old Olympia typewriter and want to identify which model it is, there are a few things you can look for. Start by looking for the brand’s logo on the typewriter, as the position of the brand name can give you a general idea of what model it might be.

You can also look up some pictures of famous antique Olympia typewriters and compare them to the one you have. This way, you might be able to find some details in the design that are used in a specific model.

Nevertheless, the best way to identify an antique Olympia typewriter is through its serial number. Typewriter enthusiasts are very particular about the serial numbers of their machines, and you can easily find more details about yours if you have that number.

You can look for it on the top, sides, back, or even the bottom of your machine. Once you find it, search it up on a serial number database like the Typewriter Database or even ask about it on online forums. Plenty of typewriter collectors will be more than happy to help you.

What Is an Antique Olympia Typewriter Worth?

Once you’ve found which Olympia model you have, it’s time to determine its value. You need to consider many factors if you want to assess the value of your Olympia typewriter by yourself.

If at any point, you feel overwhelmed, you can consider asking for a professional appraisal. A trained appraiser will have no problem identifying and evaluating your old Olympia typewriter and will ensure you get the most money possible.

Some of the most critical factors that affect the value of an antique Olympia typewriter are:

Similar to any other antique item, your antique Olympia typewriter’s condition is the primary factor determining its value. The condition of a typewriter is assessed based on its appearance and its functionality.

Typewriters are antique items meant for heavy and daily usage; therefore, some natural signs of wear and tear, such as paint cracks, are expected. But, any excessive damage or rust that alters the machine’s appearance will significantly depreciate its value.

However, the most important part of a machine’s condition for typewriter enthusiasts and collectors is its functionality. If the typewriter is fully functional, it will sell for a large amount of money, regardless of its looks.

Another part of a machine’s condition that’s important to collectors is any repairs the typewriter has had. Since typewriters are composed of numerous small mechanical parts, it’s common for one of them to malfunction and need repairing.

Ideally, you want the machine’s parts to be original and fully functional. Still, a non-functional typewriter with good repairability might fetch a high price from a collector who wants to recondition it.

Naturally, when it comes to antiques, the older an item is, the more money you get for it. That’s also true for Olympia typewriters, as some of the most expensive ones were made during the 1920s and 1930s. This is due to their vintage aesthetic and design.

But that’s not always the case, as many expensive Olympia models, like the SM series, were made during the 50s and 60s. In general, if you have an antique Olympia typewriter from before World War II, expect to get several hundreds of dollars for it.

A typewriter can be considered rare for different reasons. Ordinarily, a machine is rare if it was produced for a short period or if it has a unique feature or design that’s not present in other models.

But, a typewriter can also be considered scarce if the demand is very high and the supply is relatively low. A great example of this is the SM models by Olympia. In particular, the SM2, considered one of the most reliable models from Olympia, can be very hard to find and, thus, very expensive.

Antique typewriters are still popular to this day due to their looks as well as their functionality. Antique Olympia typewriters, in particular, have always been popular among collectors and are an ideal purchase if you want a reliable antique typewriter.

You can find them online on sites like eBay or Etsy, but remember that these heavy and bulky items can have high shipping costs. You can also look at antique stores, auctions, and even yard sales where someone might want to get rid of one.

In any case, go out there and look for antique Olympia typewriters. You never know what hidden treasures you might find!