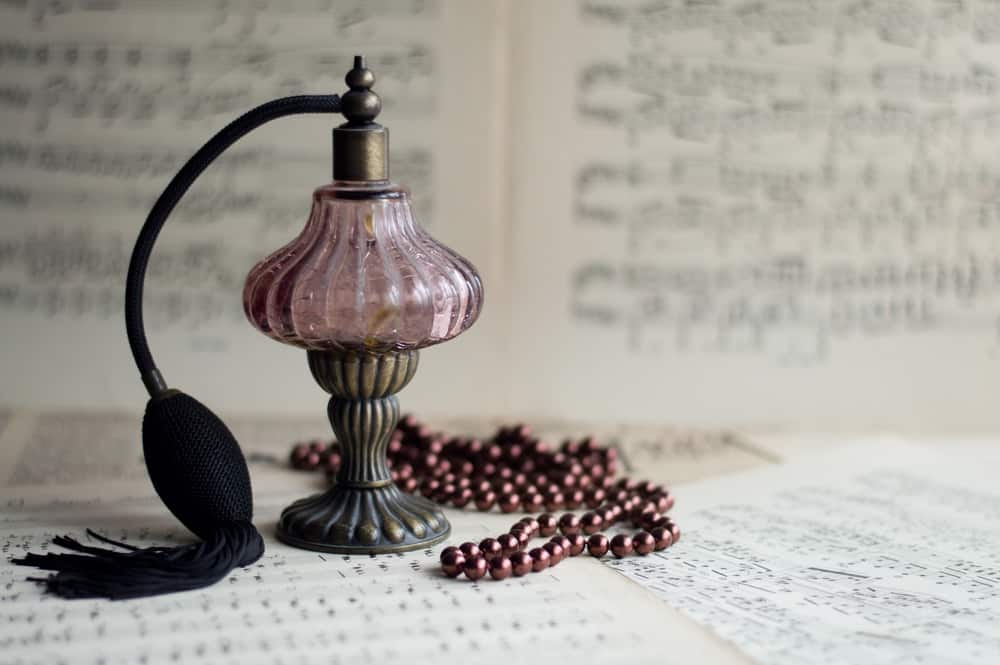 Antique perfume bottles are a beautiful addition to any collection. They can be extremely valuable, and they can add a touch of elegance to any room.

In this blog post, we will discuss the basics of antique perfume bottle identification. We will provide tips for collectors, information about historic perfume glass makers and manufacturers, and provide values for some of the rarest antique perfume bottles that have recently sold at auction.

About Perfume and Perfume Bottles

Perfume has been around for centuries, but the way scent has been made has changed a lot over the years.

Today, with the invent of synthetics, many perfumes contain a wide variety of scents never possible before. But during the 19th century, perfumes were simpler. Some were created using essential oils and flowers, while others were made with alcohol or other chemicals.

In addition, some perfume bottles from the 19th century were designed to be used with atomizers, which allowed people to spray their perfume directly on their skin or clothing.

In fact, during the late 19th century and early 20th century, the whole vision around perfume began to change. With the rise of city department stores and with the “new woman” movement, perfume became accessible to more of the population. As a result, manufacturers began to create more mass-produced perfume bottles.

Interestingly, even though many were mass-produced, artistic style was not sacrificed. Instead, it was celebrated. Many glass makers designed perfume bottles to be pure works of art. This is one reason why antique perfume bottles are so desired today.

Here are a few of the glass makers and manufacturers responsible for the amazing perfume bottles of yesteryear:

Rene Lalique was a French glass maker who is best known for his jewelry in the Art Nouveau style. While he began his career as a jeweler, he later transitioned to glass making. His very first perfume bottle for sale was manufactured for Francois Coty’s 1908 perfume line.

Featuring very intricate designs and sculptures, Lalique perfume bottles are some of the most valuable and collectable on the market today.

Rare Lalique bottles can be worth hundreds or thousands of dollars, depending on the age and condition of the bottle.

Thomas Webb & Sons was a glass making company in England, founded in 1837. The company produced by hand a variety of glass products, including vases, bowls, and of course, perfume bottles.

Webb’s most popular scent bottle designs were made during the late 19th century. These bottles feature exquisite colors and patterns, including cameo glass. Cameo glass is a type of glass that has two colors, often white (though not always) blown on top of another contrasting colored glass background. The white glass is carved away to create a design, and this is what gives Webb’s perfume bottles their distinct look.

Thomas Webb & Sons’ perfume bottles are highly collectible and can be worth hundreds or even thousands of dollars.

Emile Galle was a French glass maker who revolutionized the Art Nouveau movement. He founded his own glassworks in Nancy, France in 1864.

Galle’s perfume bottles are some of the most beautiful and collectible on the market. They feature a variety of colors and designs, including cameo glass bottles with matching glass stoppers.

Like Lalique and Webb, Emile Galle’s perfume bottles can be worth hundreds or even thousands of dollars at auction.

Baccarat Glassworks was a company founded in 1765 in a small town of Baccarat, France. Throughout the mid-1800s, it expanded from merely making items like windowpanes to producing stemware and perfume bottles. By 1907, the company was creating around 4,000 perfume bottles daily.

Then in the 1940s, the company created a subsidiary in the United States, and by 1997, the company was creating actual perfume instead of just bottles like they did in the 19th and early 20th century.

Now that we’ve looked at some of the most popular manufacturers and styles of antique perfume bottles, let’s take a look at some of the most valuable bottles on the market today. This is not an exhaustive list, but there are some really amazing bottles included here!

It may seem that the unusual design of this perfume bottle from circa 1880 would cause it to not be so popular–but this fish-shaped bottle with ruby-red glass and a white cameo of carved scales overtop actually made a huge splash at this auction!

What’s more, it sold with a fitted box of burgundy velvet, stating “Mappin & Web Silversmith To The Queen” in gold lettering, and the entire thing was in very good condition.

To make it even more impressive, this 1900 bottle came with its original glass stopper and had the signature “Emile Galle Nancy” on the bottom–Nancy, being the French town that held Galle’s glassworks factory.

It’s one of the rarest perfume bottles in the world and is stunningly beautiful.

At a 2019 Illinois auction for vanity items and vintage perfume bottles, a seller sold this amazing perfume bottle for an amazing purchase price of $33,600!

This gorgeous bottle is green glass covered in filigree, complete with its original green glass stopper. In the center of the bottle, a yellow glass oval contains the carving of a woman’s face and shoulders. The whole bottle feels very Edwardian, which is exactly the time period in which it was created.

It certainly blew its original estimate of $6,000 out of the water, and it’s easy to see why!

Appearing to be a large, shiny, black cut diamond, this is actually an absolutely amazing and eye-catching vintage perfume bottle by Baccarat with a perfume name of “Tresor Cache”, sold by Isabey Lys.

To make it even more beautiful, it was presented in its original tooled leather box. Folded shut, the oddly-shaped box contained ornate gold gilt and filigree, very much reflecting the aesthetic of the 1920s. Open each lid to reveal the beautiful black diamond-shaped perfume bottle.

It amazed everyone at a virtual auction during the 2020 pandemic

Last but not least, this record-breaking perfume bottle shattered is $50,000 appraisal by selling at an astonishing $102,000 at auction in 2021. This heart-shaped bottle with wavy, clouded glass and a gold glass cameo label and stopper has timeless class and exquisite beauty.

How to Identify Antique Perfume Bottles

When trying to identify an antique perfume bottle, there are a few things you can look for that will help you determine its value and authenticity.

A note: If you think you have an antique perfume bottle, it is always a good idea to have it appraised by a professional. They will be able to give you a more accurate estimate of its value.

Antique perfume bottles are often small in size, around two inches or less, but they can also be larger, around five or six inches or more. Too large, though, and they become decanters or other large jars and would not be considered a perfume bottle.

The type of stopper can also help identify an antique perfume bottle. One common type of stopper is a glass stopper, which were used most prevalently up to the 1920s. Bakelite, Lucite, and plastic weren’t used until the 1930s.

The material the bottle is made of can also help date it. Antique perfume bottles were most commonly made of glass, but they can also be found in porcelain, ceramic, and leaded glass crystal.

Lastly, look for a signature or maker’s mark on the bottle, as this will help you determine who made the bottle, when it was made, and the origin of the piece. If the numbers confuse you, you may want a perfume bottle identification guide to consult.

Not all of these bottles are highly valuable. It really depends on who made it and how rare and exceptional it is. But they are selling strong today and likely to continue in the future.

Antique perfume bottles are amazing, timeless pieces of artwork. There is a style for just about everyone. The right bottle at auction could be a great addition to any collection and can be worth a lot of money. You won’t regret a purchase like this!

What is your favorite antique perfume bottle? Share in the comments below!