Skip to content
Noname Antiques » How Do I Identify an Antique Picture Frames? (Styles & Values) 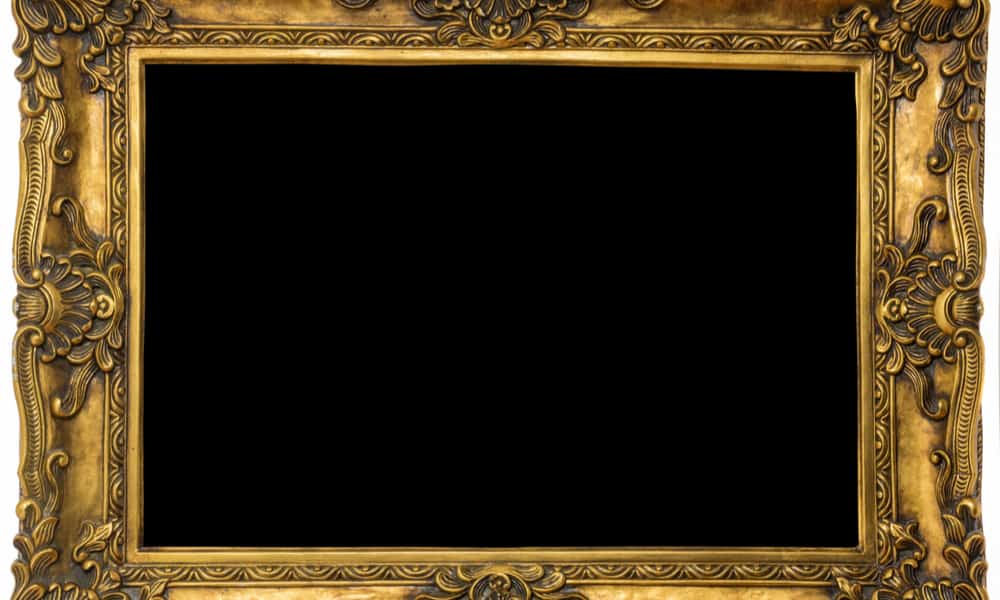 If you are a new frame collector or just want to buy one as a gift, you need to discover as much as possible about antique picture frame styles, values, and identification. You can find models made of wood, metal, or ornate gold, but they need to be over a century old to be considered antique.

Each of them will bring a piece of history to your home, but you should find out how to identify the types available to pinpoint their price. Even though almost all antique picture frames are hand-finished, those with finishing or gilded with gold leaves are often pricey. Let’s take a closer look.

Experts believe that the earliest frames originated in ancient Egypt and appeared in the 2nd century AD. Egyptians used them to surround Fayum mummy images. 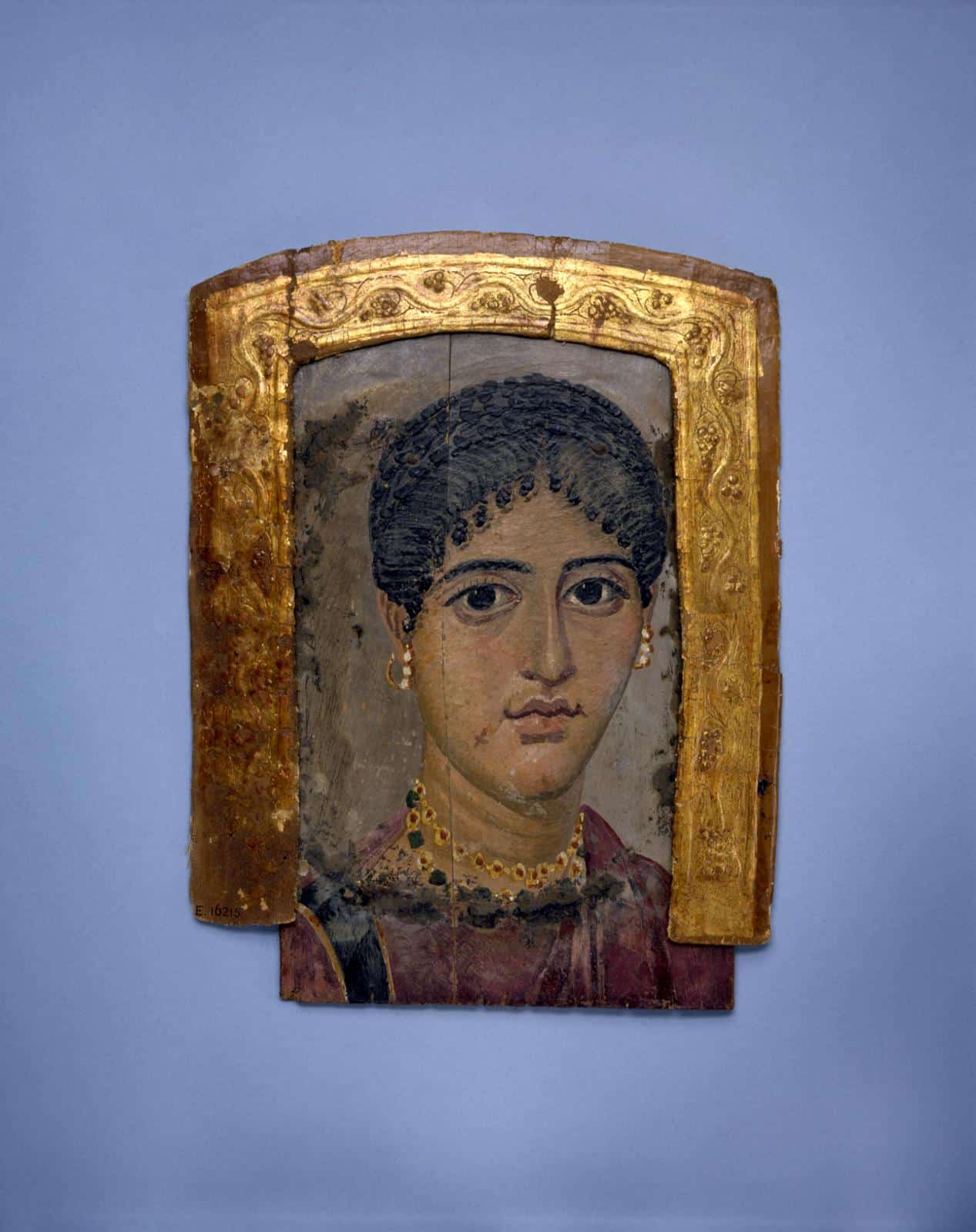 They also used stucco frames for keeping the owners’ portraits until the moment of their death. Then, they carried those framed portraits in a funeral procession and finally placed them over the mummies.

Antique frames since the 1300s

Only a few frame types from a period before the 1300s still exist. Most pieces are simple and primitive or related to interior decorations or church architecture.

The first framing borders occurred in ancient Egyptian and Greek art to divide wall paintings. However, one-piece wooden models known today appeared in 12th and 13th century Europe on small panel paintings. They had an inner gessoed carved part for painting with a raised gilded framing border and were pretty expensive. 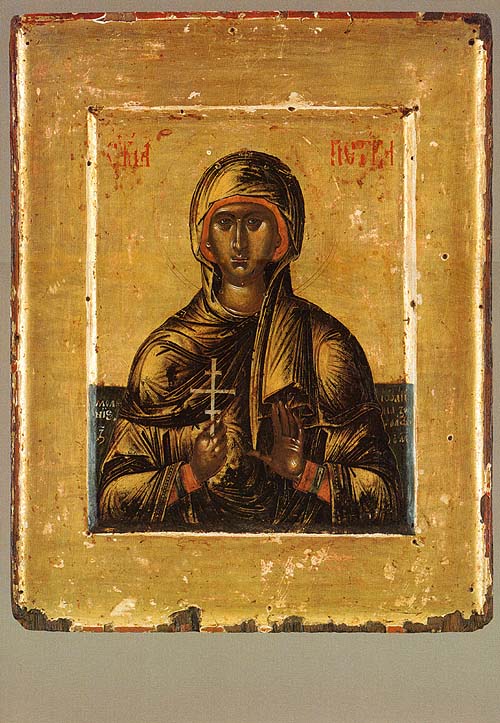 Artists have used them for icons until modern times, and most Orthodox icons are still made in the same way. After costly carved frames, engaged models appeared in the 14th and 15th centuries. They contained mitred molding strips typically made of wood and attached to the flat wooden panel outside edge. In most cases, they became unmovable church-commissioned altarpieces. 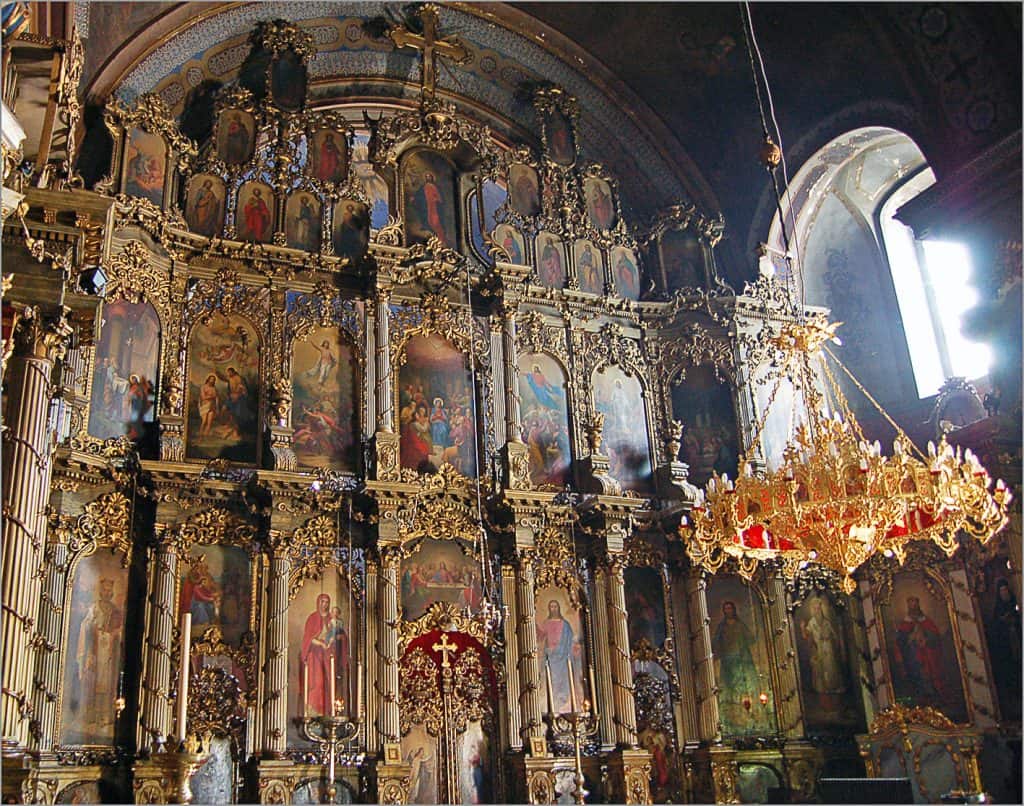 The first independent frame was made in 1423 for the altarpiece Gentile da Fabriano’s Adoration of the Magi. 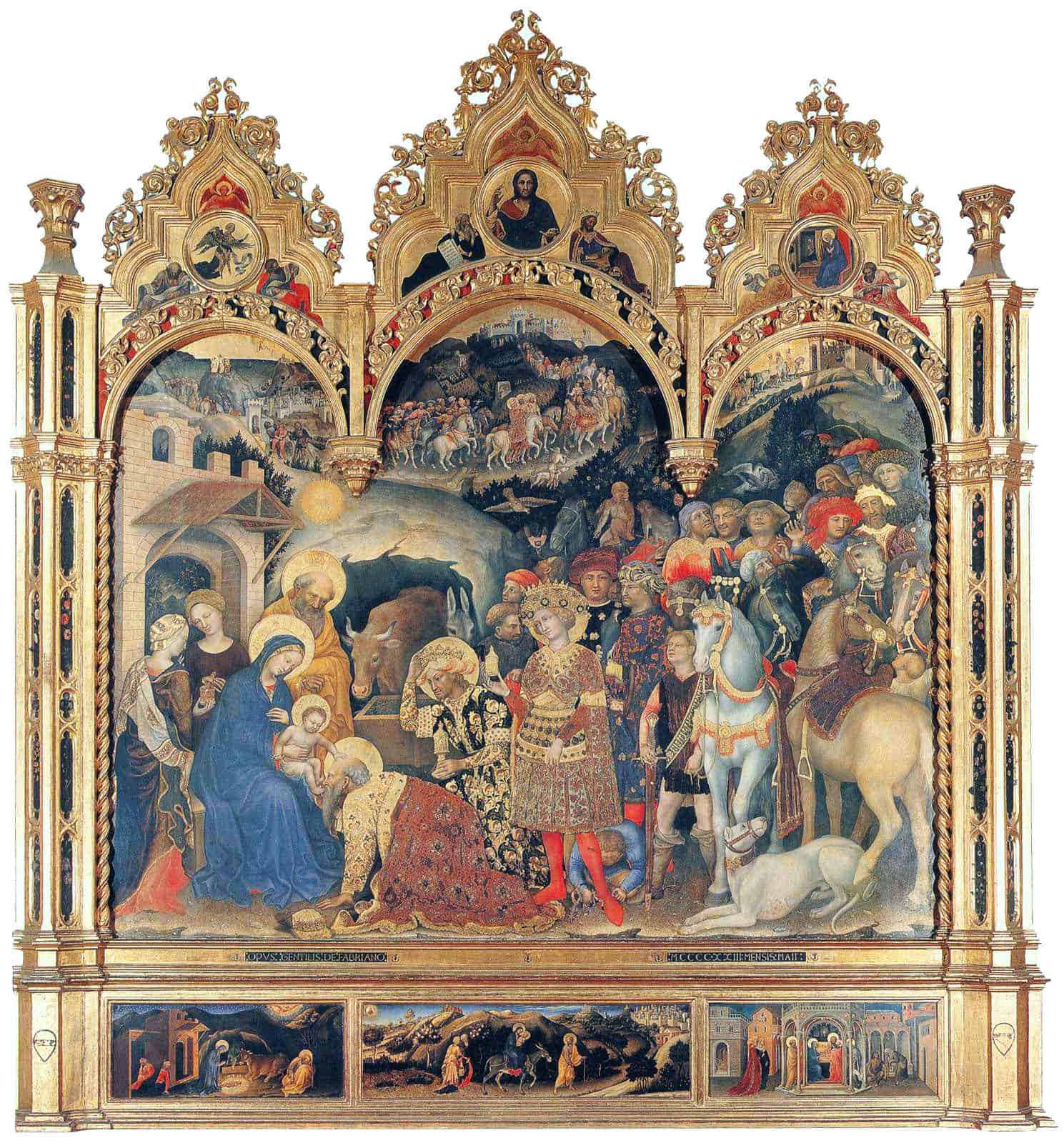 Thanks to the Italian Renaissance and the Medici family, these frames became moveable and even portable over time. This frame type resembling arches and architectural church windows occurred in Roman Catholic churches in the 1300s. It was used as altarpieces’ complements to frame religious paintings, primarily in Italy and Holland. They are the rarest on the antique market nowadays, and you can see them in old churches and museums. 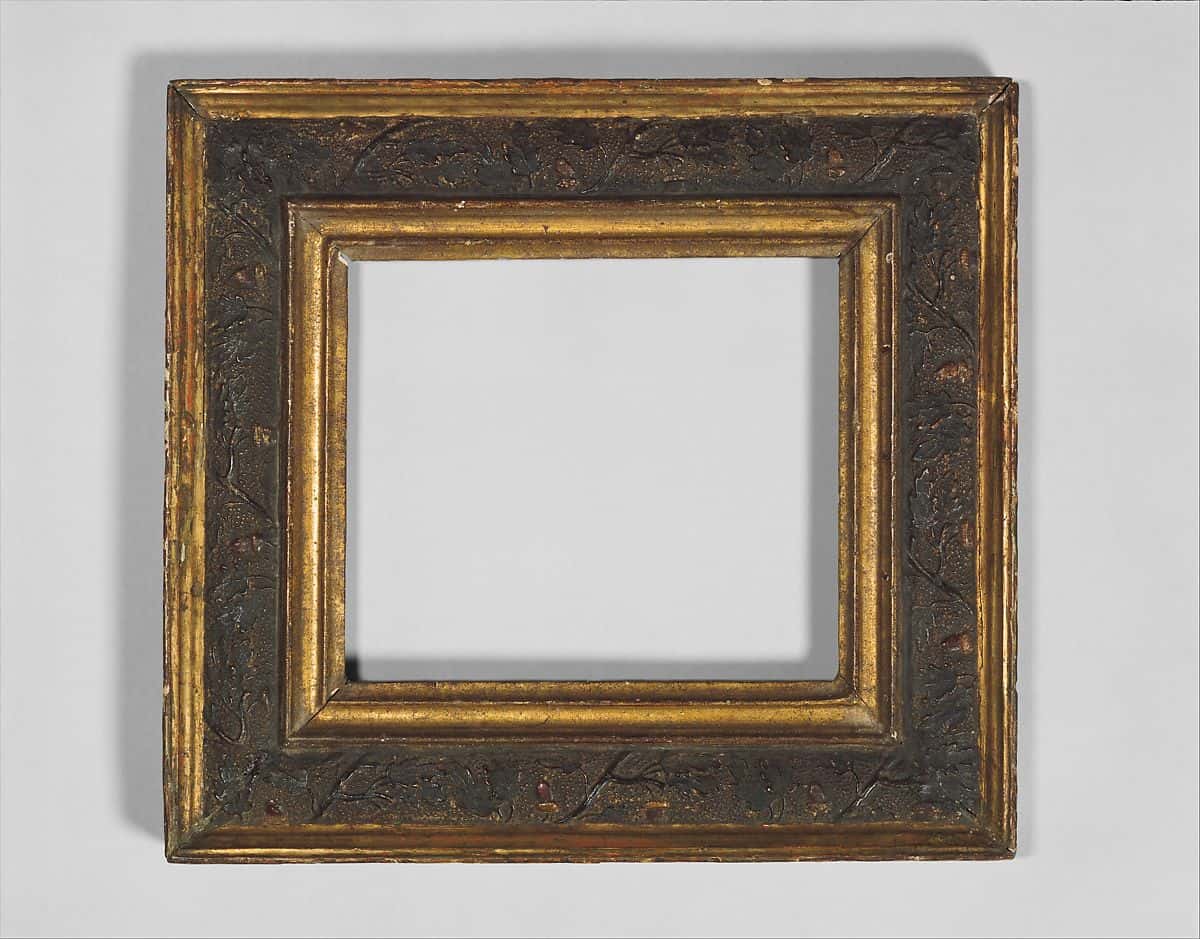 This frame type appears from 1515 to 1547, under the reign of the first Renaissance French monarch, Francis I. Many famous painters, including Leonardo da Vinci, came to France to create their masterpieces. However, they didn’t make frames, but furniture builders took over that job.

Boxlike Renaissance cassettes with carved or gilded flowers and geometric ornaments provided an in-depth look at the art. Most were created after the example of Roman art. You can find numerous pieces that survived centuries in museums, while those available on the market are always super expensive. 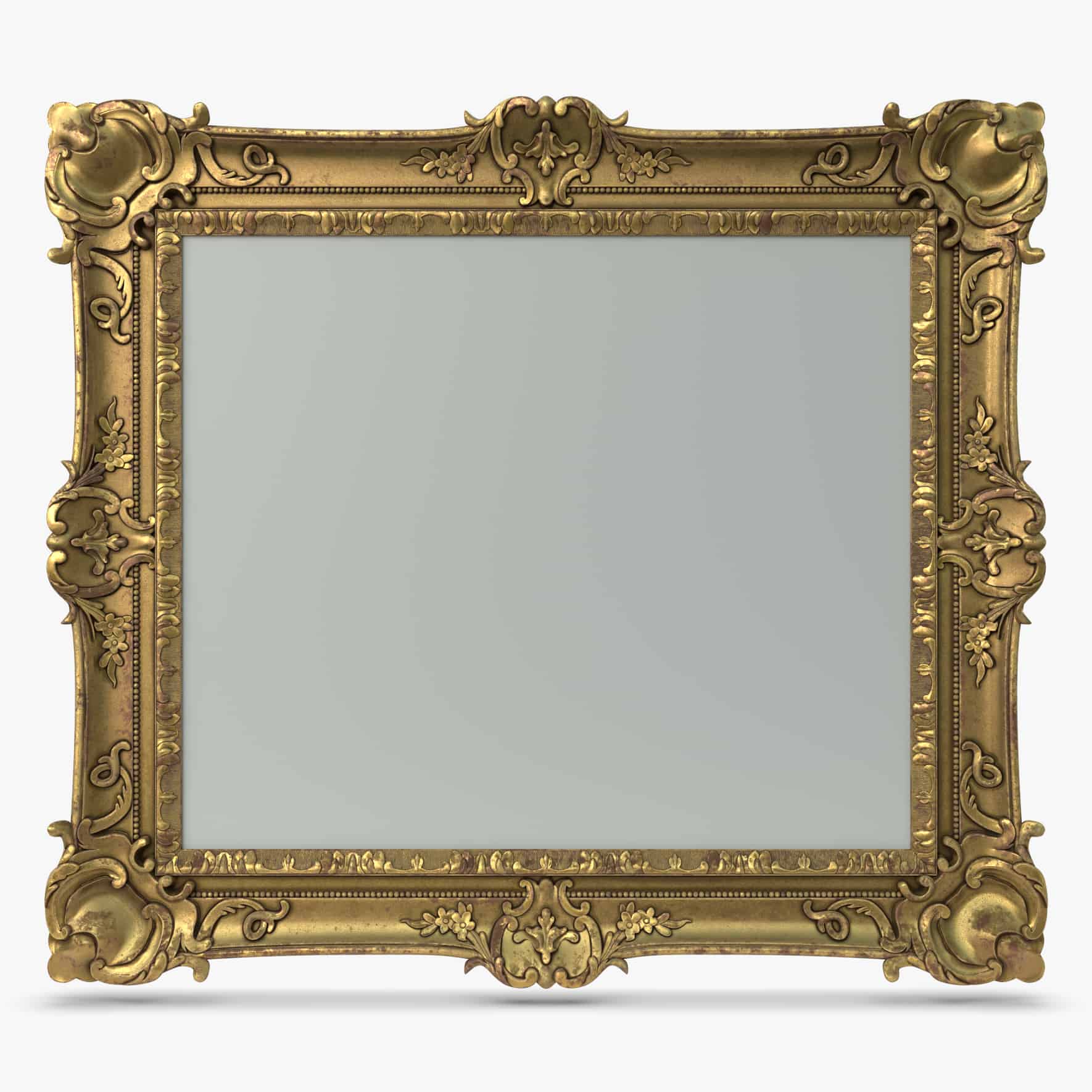 A new ornate style became trendy in France under the reign of Louis XIII. From 1610 to 1643, frame profiles became thinner with low relief corners and ornate with egg-and-dart, carved medallions, flowers, leaves, shells, and ribbons.

Even though Spanish, Italian, and Flemish craftsmen created beautiful new designs, Paris was a crucial frame-making city by the 1690s. You can also find these ornate frames in American paintings made during the late 1700s.

Even though they are impressive, they were too rich. Some experts use the expression ‘they could kill the painting’ to describe these too heavy pieces. Their soft structure weighs less while ornaments are free and balanced, not specular. These frames were popular from the 1700s to 1760s in France, and people often used them as carved mirror frames. 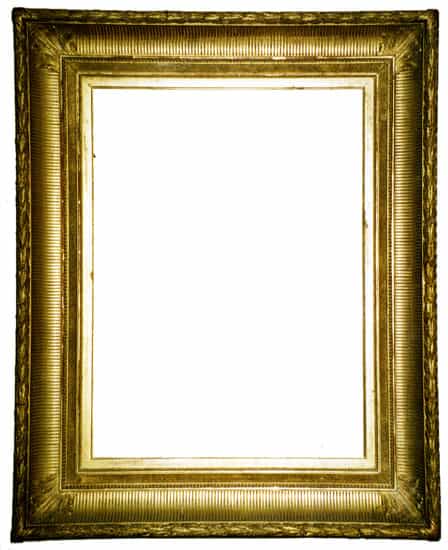 This uncomplicated symmetrical design appeared in Europe in the 1780s and included straight lines, molded squares, beading, and rounded profiles.

After years of intemperance in decorating, artists started to rely on ancient Greco-Roman art while looking for a traditional aesthetic balance. As a result, balanced geometry replaced rich ornamentation. 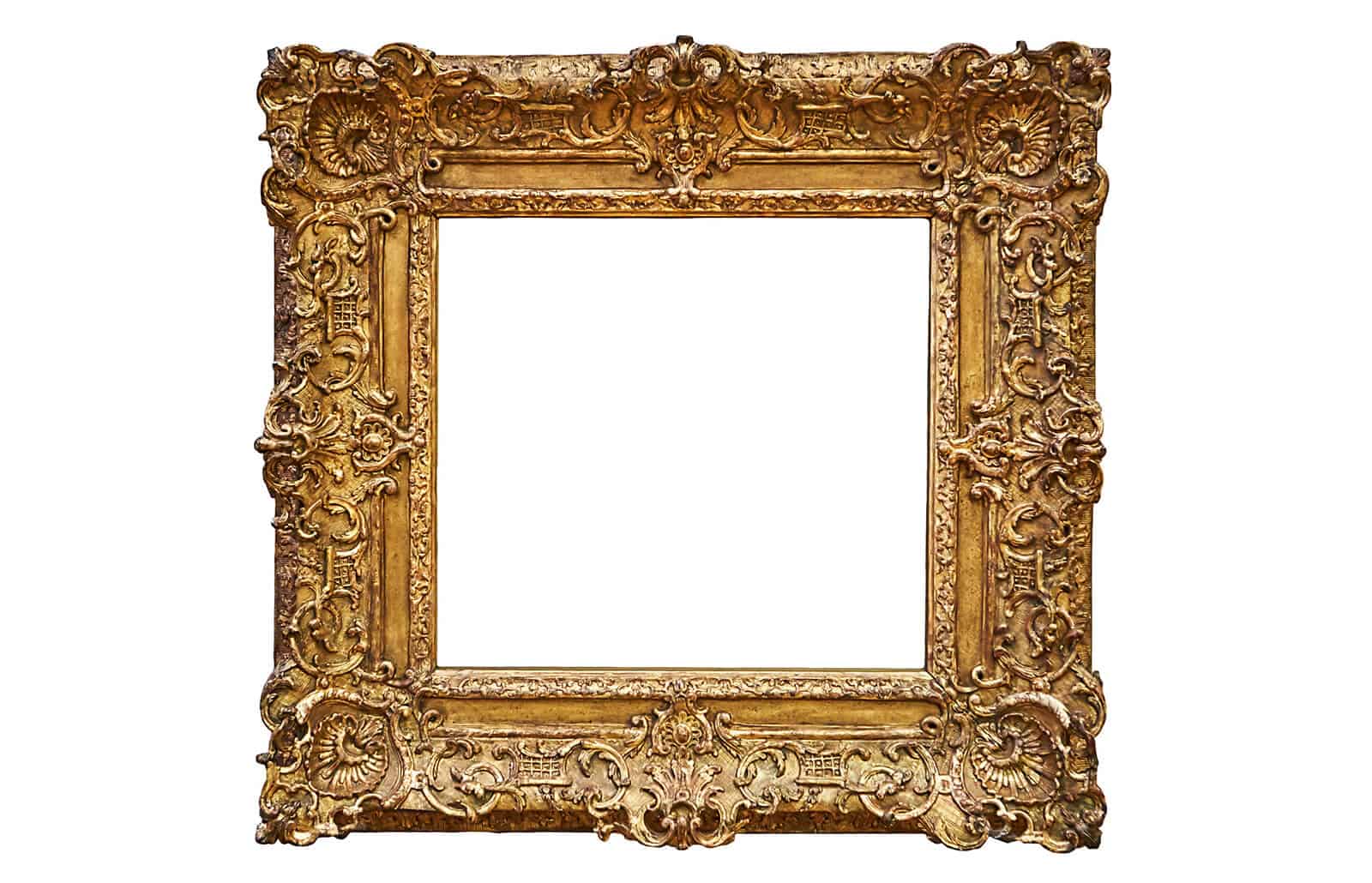 Ornately decorated gilded frames were trendy during the Victorian era and the Industrial Revolution. The pre-finished and pre-cut wooden frames covered in gold leaves were part of the art. The only way to get harmony was to add uncomplicated framed paintings. 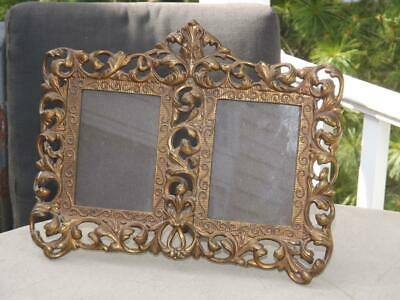 Silver and gilded brass tabletop frames were trendy in the Victorian era. People used them to exhibit miniature family portraits, typically on the fireplace mantle.

This frame type was also an ideal solution for the daguerreotypes. These photographs made on a silver-plated copper were widespread from the 1810s to 1840s. 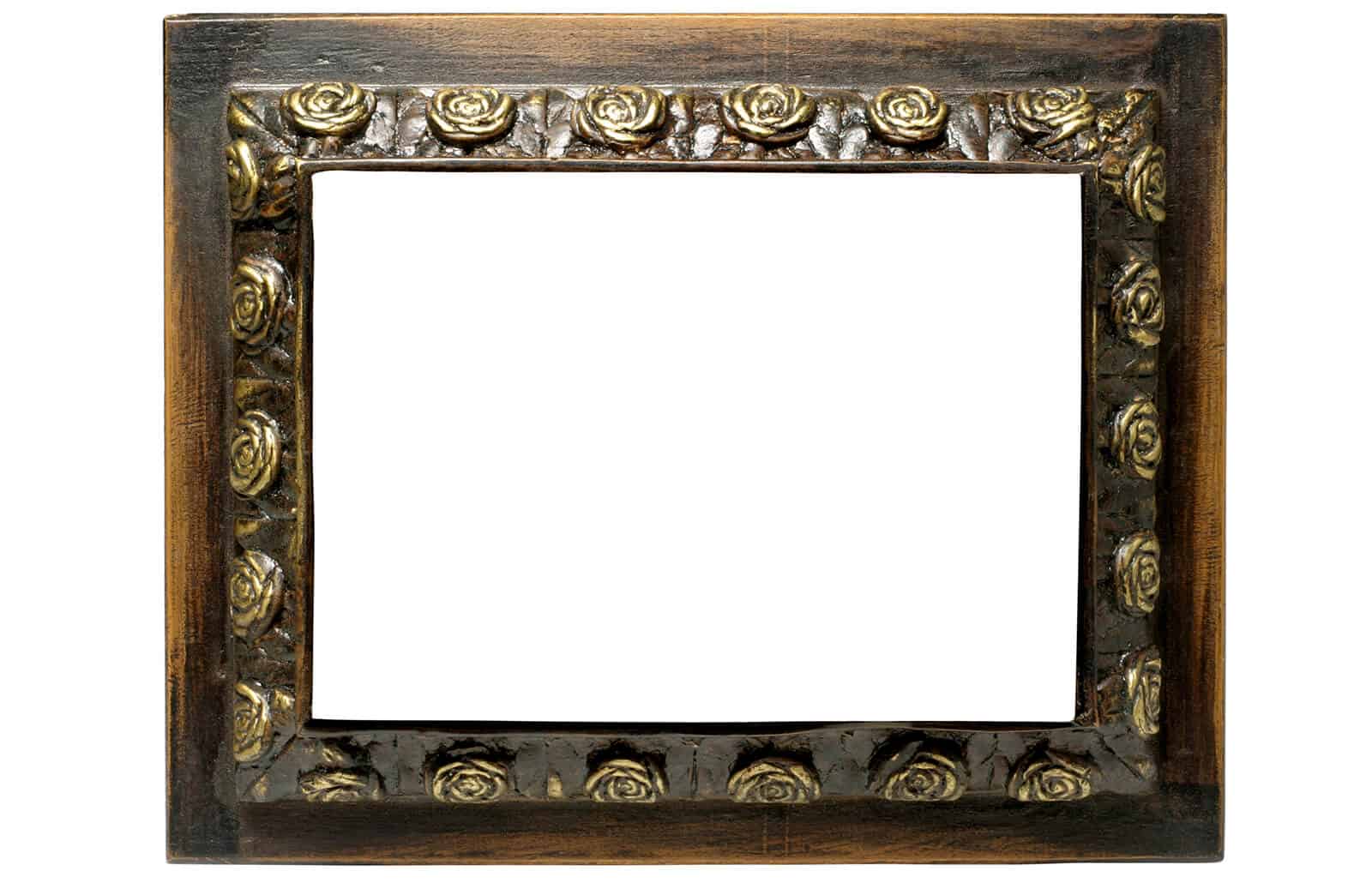 Unlike previous ornate frames, the new style existing from 1900 to 1920 preferred a simple aesthetic. These handmade quality frames were made of beautifully carved wood and decorated with natural elements like flowers, vines, and branches. Most models contained lovely hand-wrought metal parts complementing their beauty. 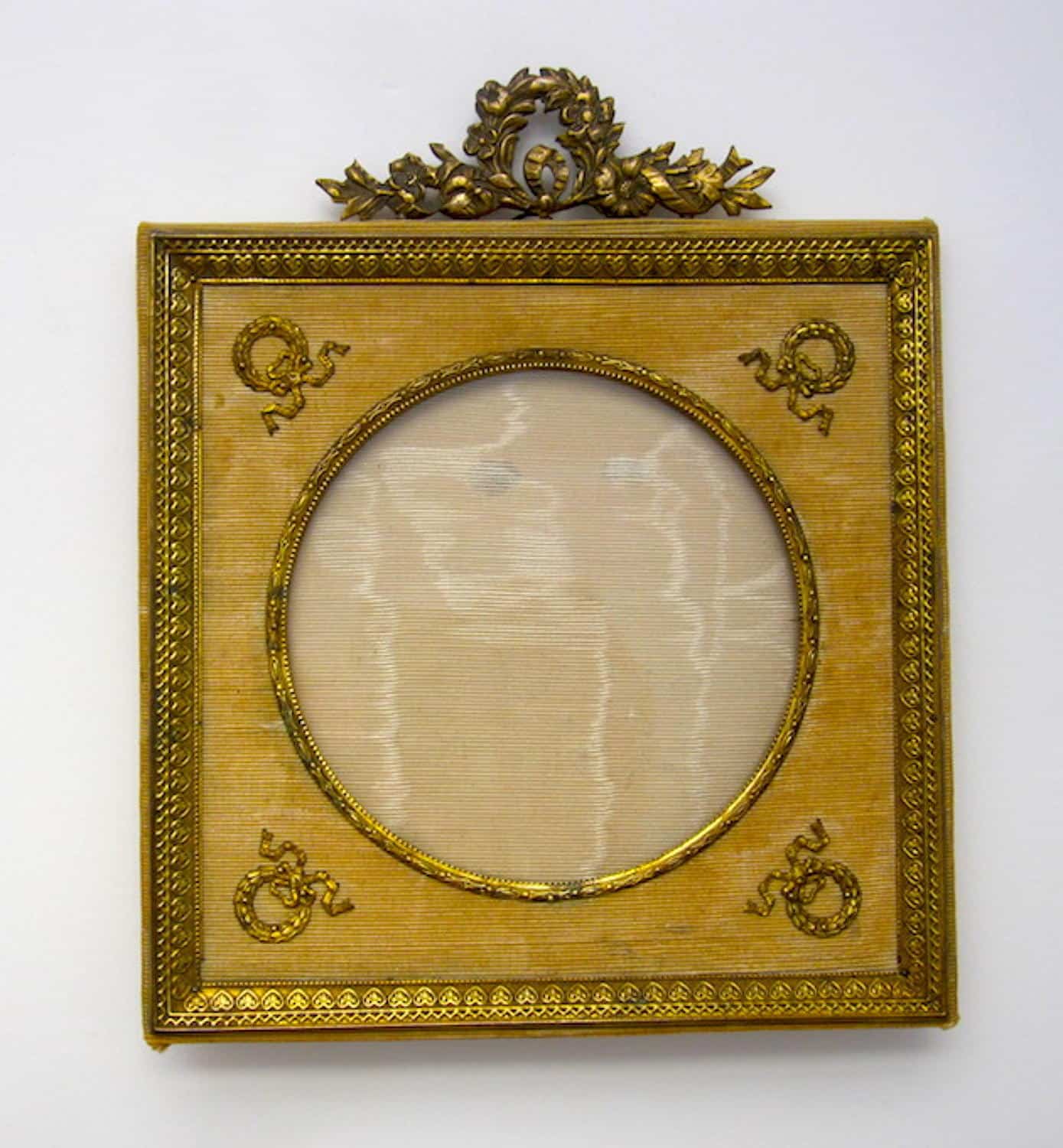 These frames occurred during Napoleon’s time in the early 19th-century as the evolved neoclassicism style. Two styles stayed pretty similar, and you may have problems distinguishing them.

You can notice slight changes in the profiles’ structure that became concave, while the finishing got a recognizable red walnut surface. On the other hand, symbols and decorations remained almost the same. 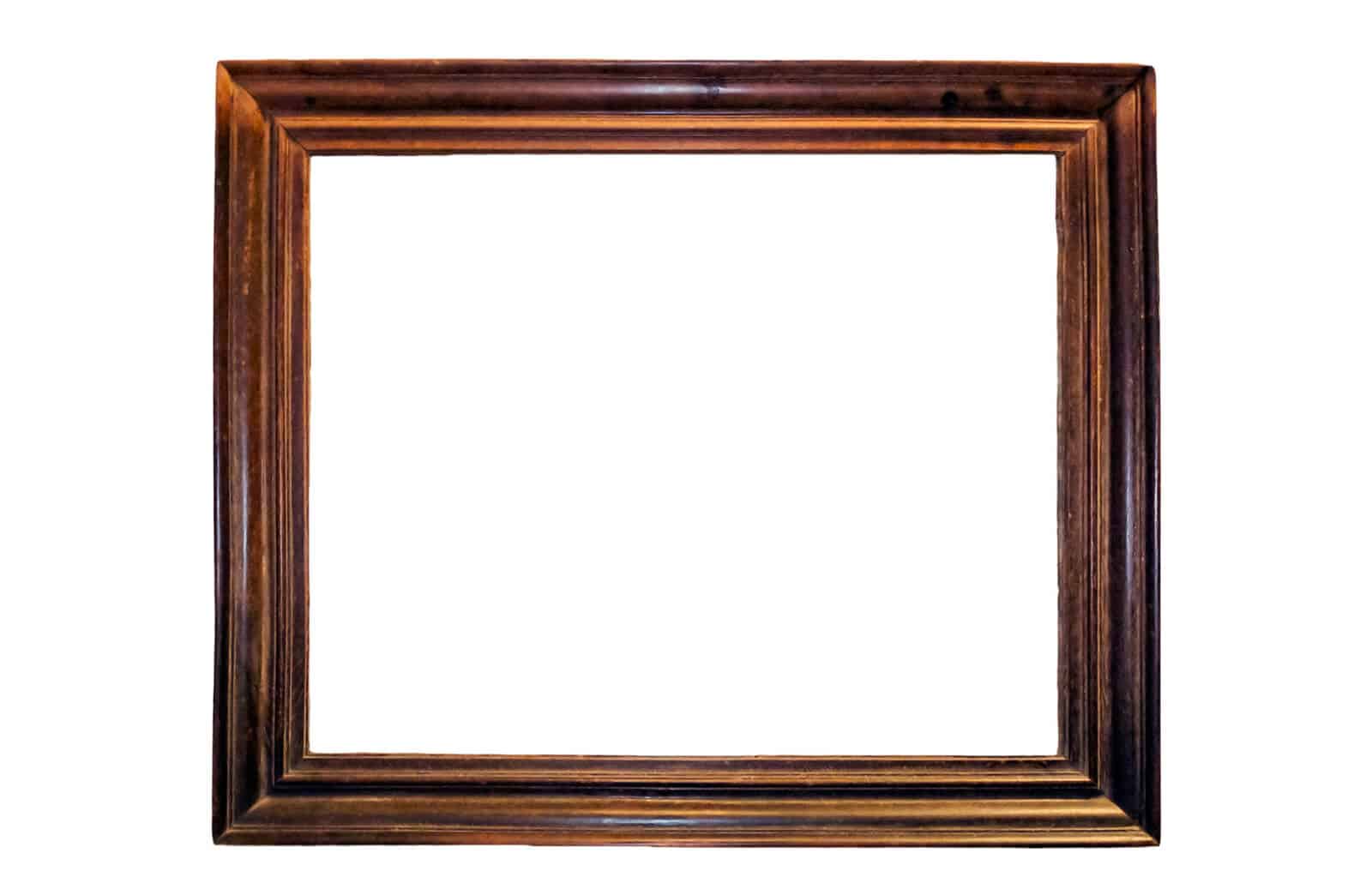 The first American frames were simple and made of wood moldings but became more decorated in the 1800s and 1900s. In some states, people preferred decorations inspired by American agriculture, so they added leaves and wheat sheaves to the frame. 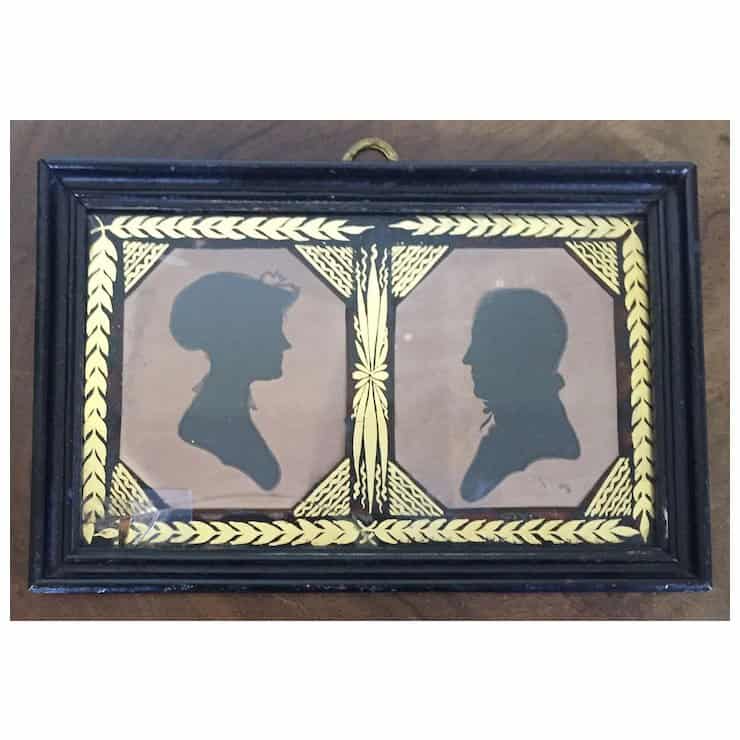 Federal frames were a part of the eponymous furniture style popular from 1800 to 1830. They often have the inner molding with columns, decoration to the corners, and an American bald eagle at the top. 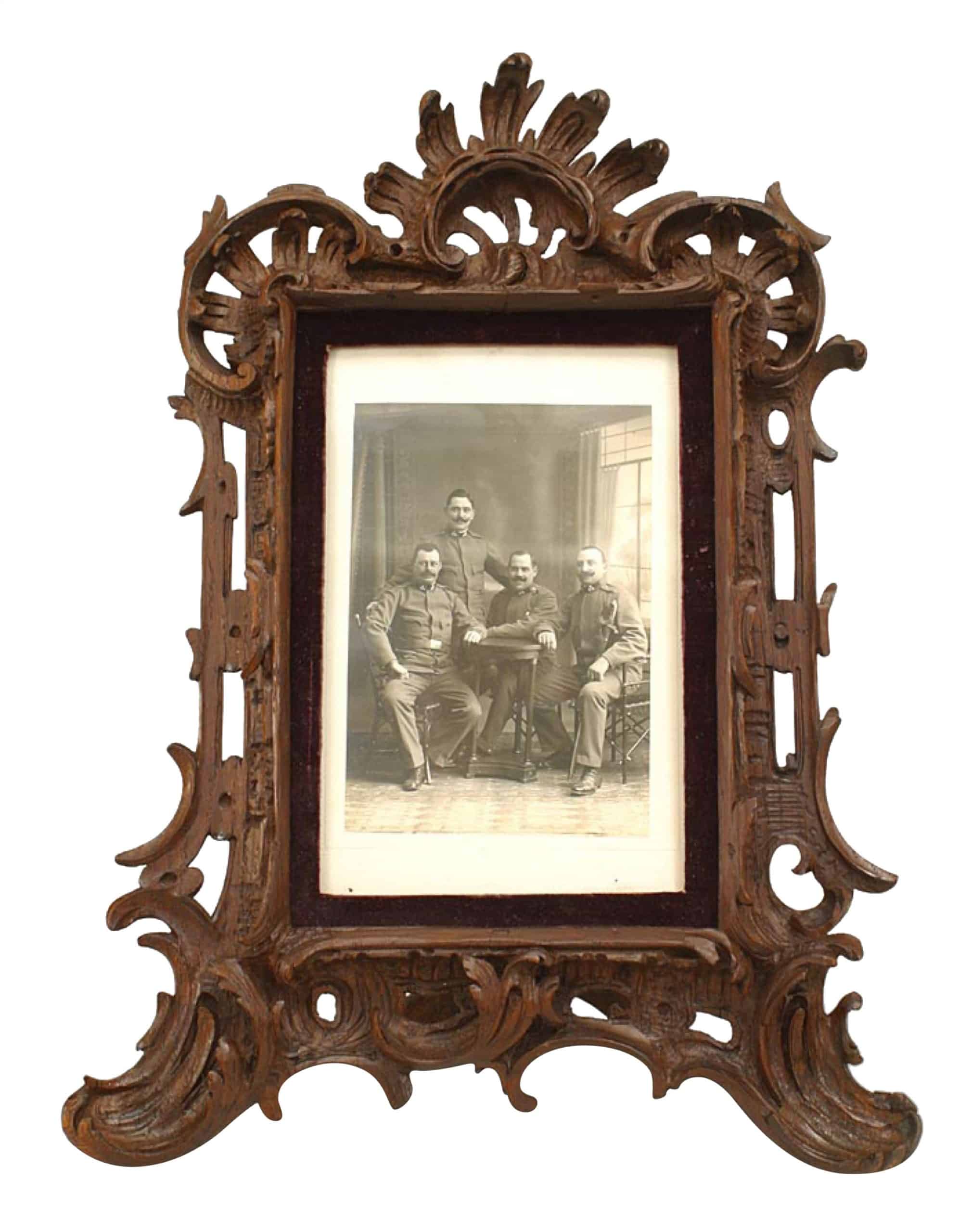 You can find two American rustic frame types. The first period was from the 1840s to the 1870s during conquering wild areas. Unfortunately, it is unlikely to find these frames made in Gothic Revival rustic style before the Civil War.

The style appearing from 1860 to 1875 included oak leaves, berries, and acorns. The second period, particularly popular on the east coast, lasted from 1875 to 1900. Craftsmen used natural barked wood, acorns, and pine cones to decorate frames in that period. 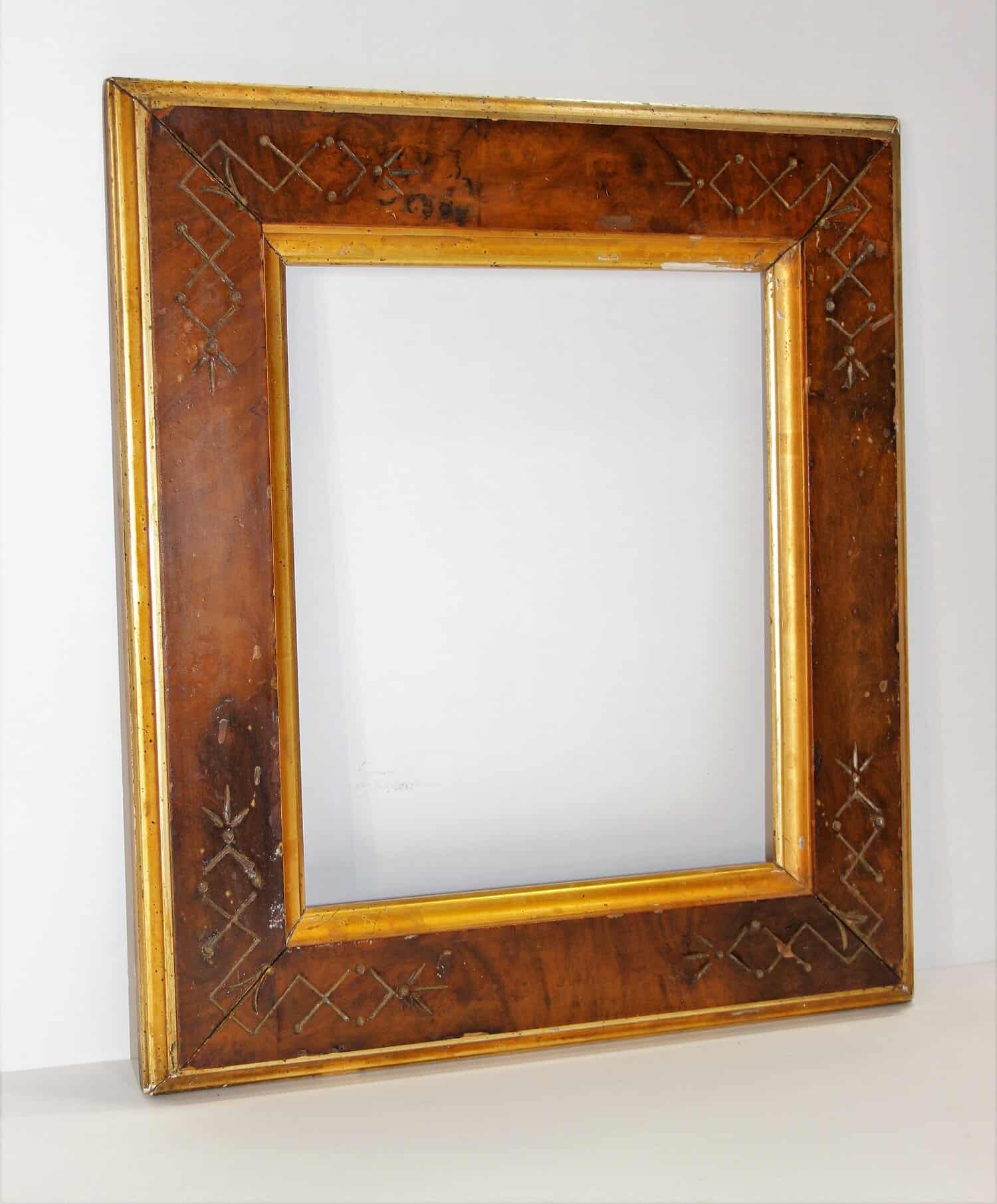 These frames, named after English architect Charles Locke Eastlake, were popular in the 1880s. The idea was to paint wood in a flat color while the only decorations were a few lines to define the construction and simple angle ornaments. 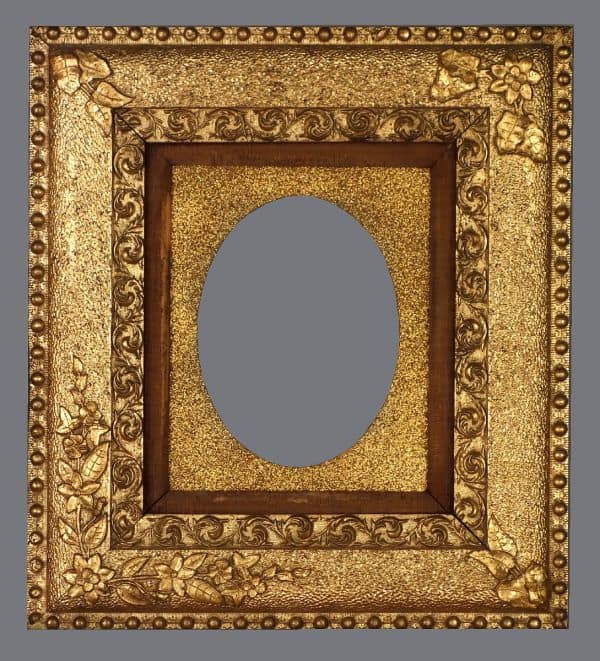 From the 1880s to the 1890s, Americans still used natural products to create frames but started adding gilding and ornaments to beautify them. Sometimes, it can be tricky to distinguish this frame style from other Victorian-like types. 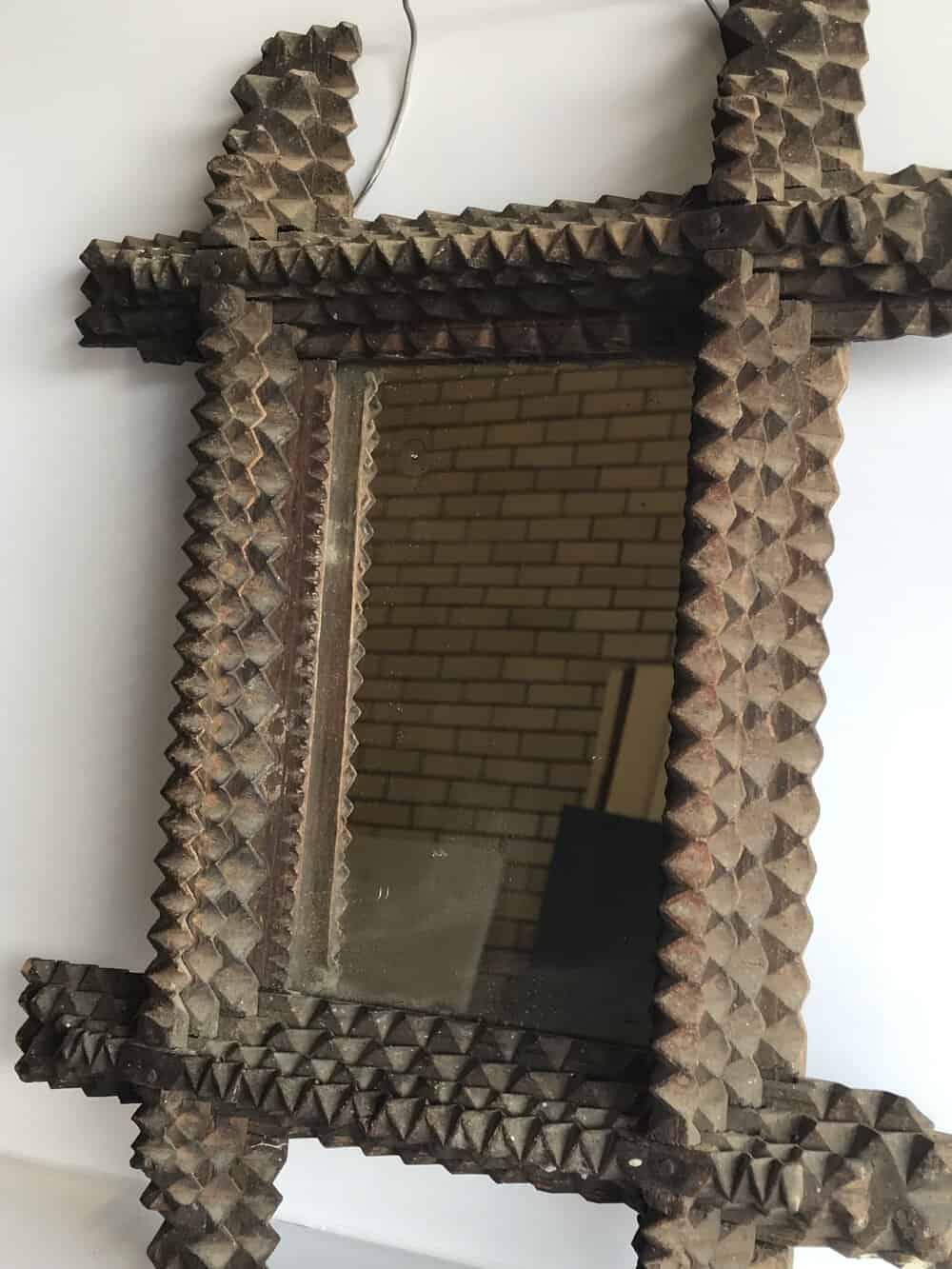 From the 1870s to the 1930s, itinerant artists and tramps created unusual frames from old wooden pieces, including cigar boxes. They sold their creations or exchanged them for food after carving the wood with a knife, shaping, gluing, and painting or varnishing it. 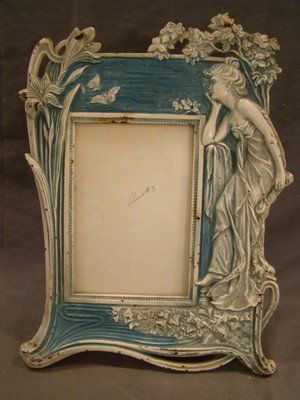 From 1890 to 1910, this popular French-style substantially impacted the frames’ appearance. It represented a return to nature, and suddenly, water lilies, tendrils, roots, and vines became a part of the picture frames.

You can find only a few wall frames since most existed as metal tabletop models primarily made of bronze or copper. 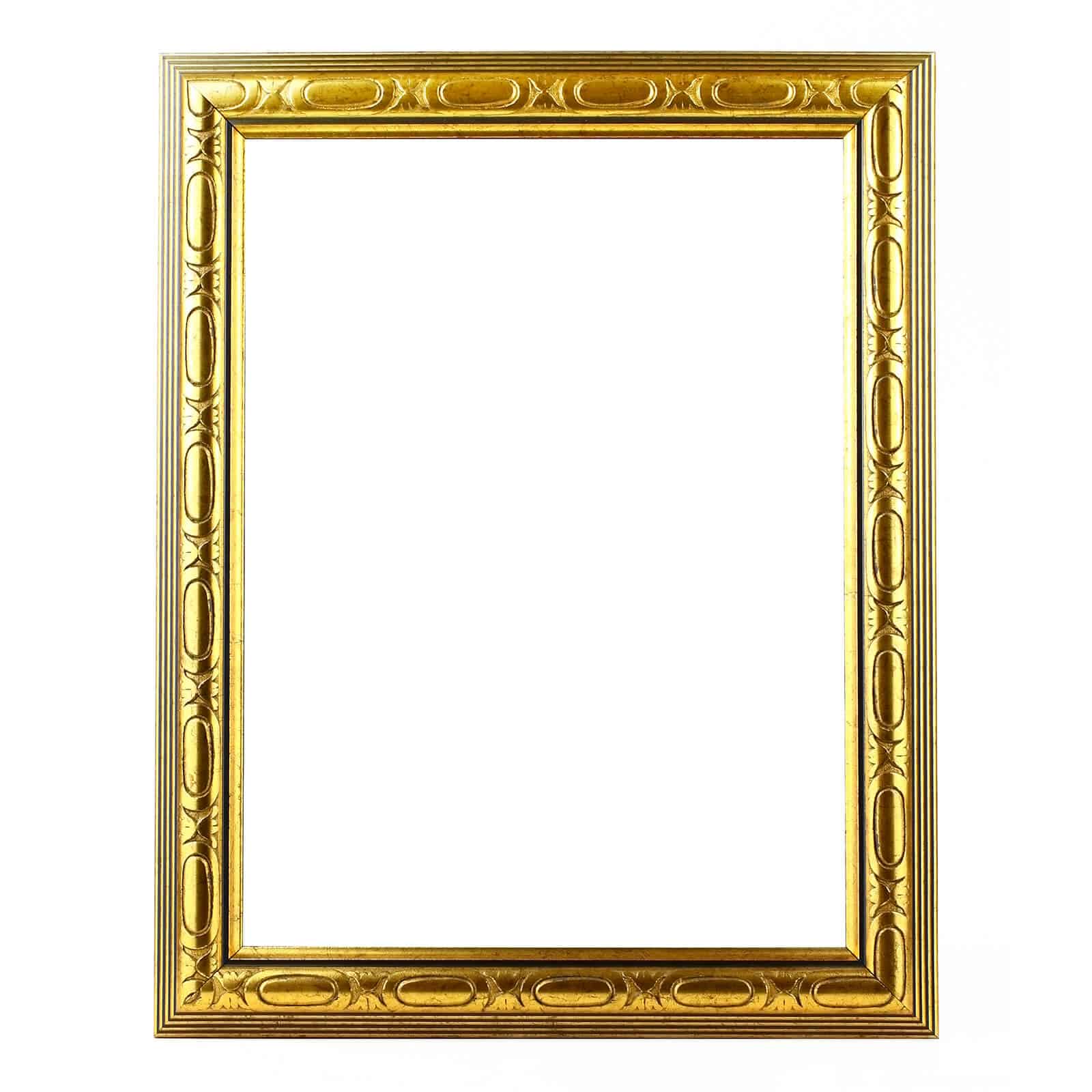 Since each frame style has its own characteristics, you can use a few tips to differentiate them. Another option is to have them professionally checked, but the first steps are to:

The picture frame back will show you information about its age since reproducing aging on the frame back is exceptionally hard. You should look for:

Remember that it is possible to repair the frame’s front to look old, but picture framers rarely duplicate warping on the back and never make wormholes.

Almost all frames made before the 19th century were handmade of hand-carved wood. After that, craftsmen often cast plaster in the mold before attaching them to a wood frame and gilding.

An antique gilded frame has a lovely gold patina. Real hand-applying gold leaves never tarnish with age but stay beautiful and shine forever. You can often notice faint lines resulting from gold sheets overlapping on the most valuable frames.

The next step is to check the gilding. If you can notice paintbrush traces, your frame is not gilded but painted. High-quality antique frames typically have slightly darker areas in the gilding.

Modern frames or reproductions have a bronze paint finish with visible brushstrokes. Moreover, it discolors over time and gets a dull brown shade. Another inexpensive way to make a fake antique frame is to add metal leaves instead of gold with an unattractive orange hue.

This criterion is unreliable since artists often combine old-like frame shapes with contemporary art, depending on their working styles. Plus, some creators used antique styles to make frames in later periods. They are not fake but don’t belong to an adequate time frame, and you can’t consider them antiques.

Ways to Evaluate the Frame Value 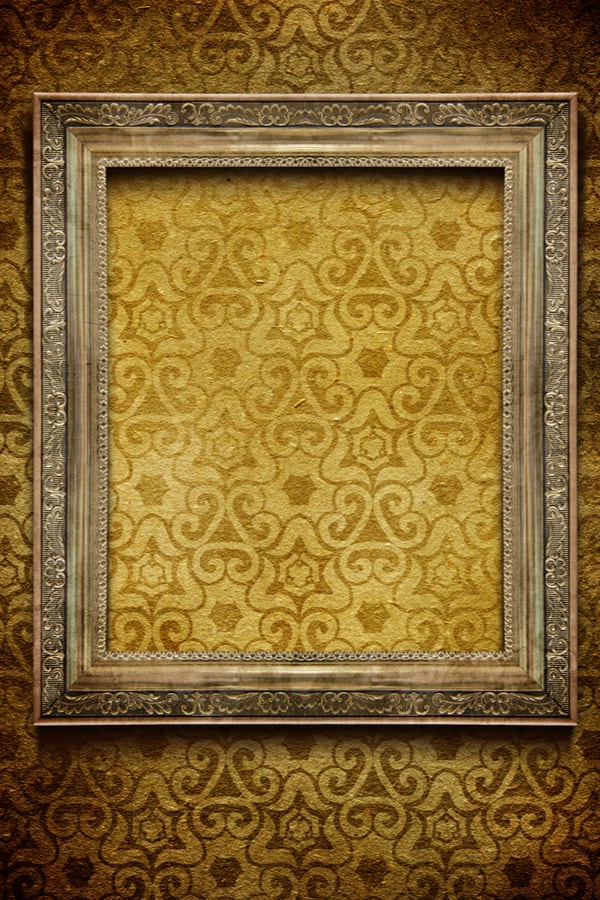 Like any other antique art piece, frames come in various designs and styles. Therefore, it can be tricky to determine their value precisely. While some models are worth thousands of dollars, you can expect to get only a few bucks for others.

For instance, some pieces are costly, including:

Condition – Since most collectors look for intact decorative frames, any damage will dramatically reduce their value. The restored frame or the one with visible scratches, chipped gilding, or missing plaster will cost less. On the other hand, the original glass will add to the frame value.

Size – The rule of thumb is that the larger model will always be more pricey when finding two frames with the same style and age.

Age – As you can guess, older frames in excellent condition are typically worth more. However, be prepared that some styles are more attractive and desirable and always have a higher price than older pieces.

Weight – Most antique frames were made of quality wood, making them heavy. One of the quickest ways to recognize a reproduction is to check the frame weight.

Labels – Most collectors require to find a craftsman’s mark on the frame back with the date of creation. The label can be stamped directly to the frame back, but you can also find an attached engraved metal or a piece of paper, depending on the period.

Most antique frames don’t feature any sign to help us know who the designer was, but some noted frame makers left a sign on the frame. You can be sure that the creator’s name always increases the price.

Seller’s reputation –  The only way to get the real thing for your money is to purchase a frame from reputable antique stores.

Antique picture frames are collectible, but sometimes people purchase them for special occasions or artistic purposes. Some well-preserved models can be pricey, particularly the oldest ones or those with ornaments. Such a piece can beautify your photo or mirror and increase the framed artwork value.