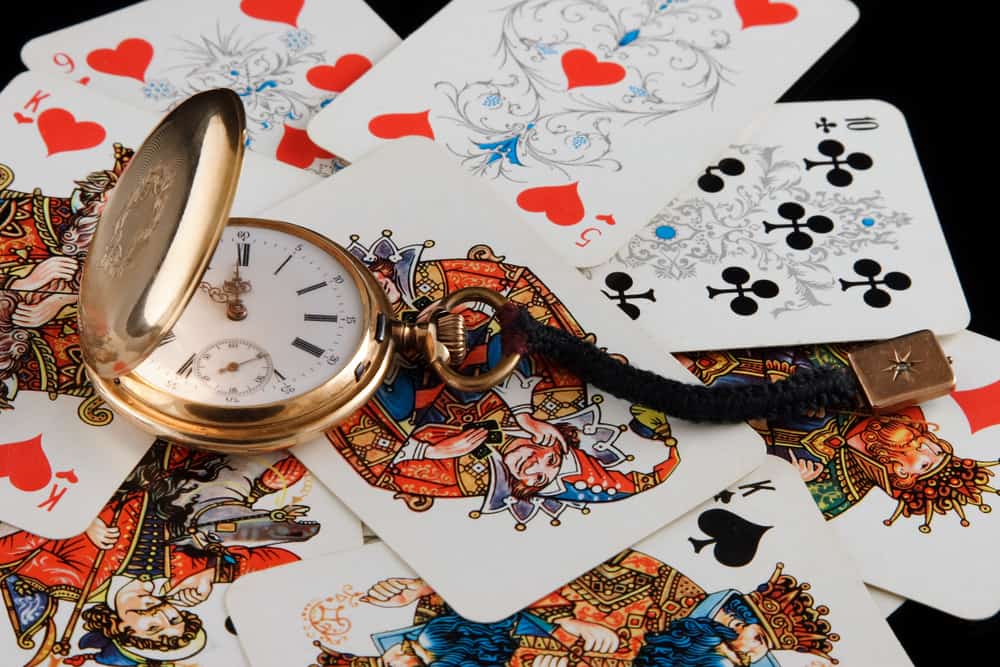 Playing cards are usually made from heavy paper or plastic-coated paper. They are most commonly used for playing card games, but you can also use them in magic tricks or for card throwing.

Many types of playing cards have been around for ages. There are different types of them, as well as special and limited edition ones. Apart from their original purpose, they’ve been used as souvenirs, educational tools, or for advertising and promotion. All of the above make them highly collectible items.

Do you want to start your own playing cards collection? Perhaps you found some antique playing cards and want to see if they have any value? In any case, you’re in luck!

In this article, we’ll examine the history and different types of playing cards, as well as provide you with all the information you need to determine your antique playing cards’ value.

The History of Playing Cards

Historians believe card games originated as early as the 9th century AD during the Tang dynasty in China. In fact, the first-ever documented card game was called the “leaf” game and was played by Princess Tongchang with members of her husband’s family.

After that, card games made their way through the Middle East and became popular in Egypt. One of the earliest complete decks originates from 15th century Egypt. It’s similar to modern-day playing cards, with 52 cards and four suits: coins, cups, swords, and polo sticks.

Playing cards eventually arrived in Europe around the late 14th century, most likely through Venice. They became popular very quickly and spread rapidly throughout all European countries. That’s when three distinct styles of playing cards were developed; Latin, German, and French (which is the most prevalent type today).

All these early playing cards were made of different materials and were hand-painted. In 1565, Pierre Marechal came up with reversible illustrations for the court cards (the king, the queen, and the jack), a design still in use today.

In 1765, British cards required a tax stamp on one of the cards, primarily the ace of spades. Jokers started appearing in decks around the late 1800s, and they were an excellent way for the manufacturer to advertise its logo. Since there are countless different joker cards, they are very collectible.

Throughout their extensive history, there have been a few different types of playing cards. These are:

These early playing cards were printed and then painted by hand or using stencils. The oldest complete set of playing cards from that era is the Cloisters Set of Playing Cards, also known as the Flemish Hunting Deck, which belongs to the Metropolitan Museum of Art in New York.

Until the 1870s, playing cards were usually blank at the back, whereas the front was often heavily decorated. It was also common for the court cards to resemble the faces of famous individuals or literary characters.

This is a unique set of playing cards that were popular up until the early 20th century. The purpose of souvenir playing cards was to depict several popular tourist locations and include logos from hotels and airlines.

They were very cheap to produce, which meant they could be bought for little money or even given as gifts to tourists. This makes these decks highly collectible, but don’t expect to get too much money for them.

Modern decks of playing cards can be categorized based on several different factors. Depending on the type of suits they use, most contemporary decks fall into one of these types:

This is the standard and most well-known type of playing cards.  They consist of 52 cards in four different suits: spades, clubs, diamonds, and hearts.

There are 13 cards for each; the ten numbers and the three court cards in their signature reversible style. Most modern decks also come with one to six joker cards.

This variation is common in Spanish and Italian playing formats. The deck consists of four different suits: swords, clubs, coins, and cups. The Latin decks can be full size with 52 cards or smaller with 40 cards. The smaller decks don’t include the higher number of cards from 8 to 10.

Germanic decks come in a few different sizes and include four suits. These are the hearts, acorns, bells, and leaves. There are also the Swiss-Germanic decks that swap hearts for roses and leaves for shields.

Are Old Playing Cards Worth Anything?

Like any old item, the value of antique playing cards is based on a few factors:

An old item’s condition is one of the most important parts when you want to sell it. This is especially important for old playing cards, as, by nature, their purpose is to be used heavily in card games. Therefore, some natural usage marks are acceptable and won’t devalue your cards significantly.

Similar to other trading cards, antique playing cards have levels of condition. Depending on the amount and the type of damage a card has, its condition can range from poor to mint.

When trying to value your cards yourself, you must be sincere. If you advertise a set of playing cards as being in excellent condition while it’s in poor shape, the buyer will be unsatisfied and probably ask for a refund.

Completeness is essential for antique playing cards, as they were meant to be sold in sets to be fully functional. When you want to assess the value of old playing cards, you need to find out if the deck is complete or not.

If your deck is a standard 52-card deck, find out if it contains all 52 cards. Also, if the deck has any extra cards, such as jokers, make sure they’re there because they can add tremendous value to your set.

Finally, if you have the deck’s original box, and it’s not in tatters, make sure to include it, as it can significantly increase your set’s value.

Another critical factor concerning the value of antique playing cards is their supply and demand. Sometimes, it might even be more important than the deck’s condition. If you have a deck that’s very rare and in perfect condition, but there’s no demand for it, its value will be significantly lower.

On the other hand, if you have a set of old playing cards that’s very popular and desirable, you’ll be able to sell it for a high price regardless of its condition. If you find a rare and desirable deck in good condition, expect to earn a lot of money for it.

Finally, if you have a deck centered around a specific theme, it might be more valuable than you think. Several collectors only collect decks with particular themes and might be willing to pay more for a deck of their favorite ones.

Popular themes include military-themed sets, particularly those from World War I and II. Also, many people enjoy collecting sets with railroads or different airlines.

While many antique playing card sets are very valuable, most of the time, they’re either very hard to find or are in poor condition. That’s why many collectors choose to collect more modern sets of playing cards.

Some of the rarest and most valuable decks of cards are:

This is one of the rarest sets of playing cards ever made. The Scarlett Tally-Ho playing cards were designed by Jackson Robinson and crafted by the Kings Wild Project.

The Legacy edition only had 50 pieces; it featured many gold accents and came in a unique wooden case. These decks are tough to find and can cost several hundreds of dollars.

Jerry’s Nugget Casino in Las Vegas created this set of playing cards during the 1970s but never used it for casino games. Instead, the stock remained in a warehouse and was eventually sold at the casino’s gift shop for a few dollars each.

However, when famous magician Lee Asher discovered the deck and started praising it publicly, it became one of the most popular decks ever. The original sets still sell for huge amounts of money, despite the existence of a modern version of the deck.

The White Centurions deck became famous after it was featured on Chris Kenner’s Blueprint. Collectors worldwide enjoyed the elegant design of the deck, which is essentially a set of Bicycle Centurion Playing cards with inverted colors. Only 1,100 pieces were produced by Theory11 in 2008 and sold out within a few days.

The Venexiana Gold playing cards is a unique design by Lotrek in 2014 that features a hot-stamped gold foil on each card’s back. The complex and expensive process of using gold instead of regular metallic ink meant that only 212 pieces were ever produced. They sold out almost immediately and still fetch very high prices in the secondary market.

Playing cards are definitely one of the most popular collectibles in the market. Most of them are easy to find, but the very rare or old decks can be very expensive and tough to track down.

You should always do your research when you want to purchase antique playing cards or even modern ones. Some great books to look for are A History of Playing Cards: And a Bibliography of Cards and Gaming by Catherine Perry Hargrave and the Hochman Encyclopedia of American Playing Cards by Tom and Judy Dawson.

In any case, go out there and look for some modern or antique playing cards to add to your collection. You never know what bits of treasure you might find!