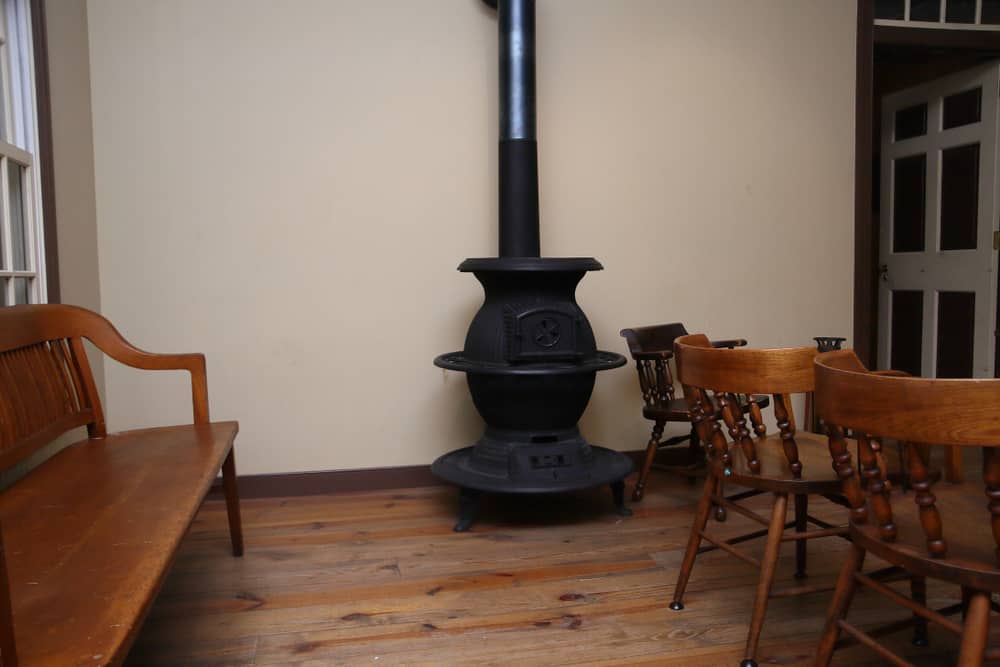 For the longest time in human history, cast iron potbelly stoves – named for their bulging middle which resembled a rotund man’s stomach – could be found in almost every house, school, post office, bar, eatery and train station up and down the country. Unlike fireplaces, they were transportable (despite weighing upwards of several 100 lbs), affordable, and doubled-up as cooking stoves in addition to their heating properties.

Produced in vast quantities throughout the 19th century and well into the 20th, potbelly stoves unfortunately fell out of favor come the invention of central heating and the increasing availability of cheaper, electric heating options. Despite this (or perhaps because of it), an antique potbelly coal and wood stove in good shape and good condition can today sell at auction for quite-impressive chunks of money.

In this collector’s guide to buying and valuing an antique pot belly stove, you’ll learn about the all-important history and context of potbelly stove production and use. We’ll then take a look at how to tell authentic wood-stoves apart from the fakes (or, rather, more modern reproductions). Finally, you’ll find out how valuable these stoves can be and how best to restore an antique stove to a condition in which it can be used or sold.

The History of Potbelly Stoves

Potbelly stoves were invented in the mid-19th century, and became a staple heat source and cooking appliance by the late 1800’s.

They were almost always made from trustworthy cast iron, featuring a barrel-like body in which wood and/or coal could be burned, draft controls such as a grate for adjusting airflow, feet to raise the bulging body from the floor, and a dismantlable stove pipe which was used to redirect smoke from the unit out through the ceiling or a hole in the wall.

The reason for the explosive popularity of the stoves was thanks to the greater efficiency and portability of them compared to earlier models such as the Franklin stove, as well as thanks to their widely various applications.

Potbelly stoves would often be found as heating appliances in classrooms, bus and train stations, public drinking and eating establishments, as well as in the home as parlor stoves. A single mid-sized potbelly stove could heat a large community space throughout, whilst the flat top of the stove provided a communal cooking unit. This was, for example, used by teachers to cook the children’s lunch on school days.

There were a large number of manufacturers of these iron stoves, including Clermont and Glenwood. Innovations to the traditional design included the introduction of a secondary combustion chamber which allowed for the natural secondary combustion of natural gasses and leftover fuel to maximize the heating efficiency of the unit.

These days, vintage stoves with a pot belly are rare and attractive collector’s items. Especially sought-after are those stoves which still work, since after the collapse of their popularity many fine models were tucked away in basements and there left to rust.

How to tell the authenticity of an antique potbelly stove

Determining whether or not that rusting hunk of junk in your garage is indeed a potbelly stove could mean a difference of several hundred dollars when it comes to restoring and selling your antiques. Thankfully, reproductions of these units are fairly rare since doing so would be time-consuming and costly for the fraudulent manufacturer.

Instead, you’re far more likely to come across an abundance of clearly more modern wood-burning stoves which meet the much stricter EPA environmental regulations of today’s world. To make sure that what you’re looking to buy or sell is a genuine antique potbelly stove, there are a few things you should know to look out for.

First thing’s first: look for the potbelly! There are hundreds of thousands of stove designs and types out there, but only a potbelly stove has the classic barrel-shaped main combustion chamber. The “potbelly” part of these vintage stoves was named in reference to a larger person’s big belly, and remains fairly easy to spot, even for a novice antique collector.

Traditional, antique, and therefore authentic potbelly stoves were constructed entirely from cast iron. Much later, and more modern, models tended to use steel instead, but it’s cast iron you want to be on the look out for with regards to value.

The body of the original potbelly stoves was constructed of cast iron as were the two doors on the front. The upper (larger) door was for loading in fuel (wood or coal), whereas the lower door was for removing ashes and cleaning and maintaining the unit.

Some of the fancier, more decorative Glenwood stoves also used chrome decals and detailing for added opulence. Modern stoves will likely feature glass doors or windows so that you can watch the fire.

Potbelly stoves were also unique as portable cooking stations, or ovens, so keep an eye out for that flat top! Not all original potbelly stoves had one, but if you find one with a flat top at the upper part of the barrel-shaped body, then you’re in luck – these tend to attract more sellers and higher prices.

Sometimes the flat top element of a potbelly burner will even have specific indents for the use of pans and pots for cooking. Having these might raise the potential value of your stove even further.

The final crucial element to search for is the exhaust pipe or chimney. Potbelly stoves required extendable, collapsible, transportable chimneys which removed the thick black smoke of coal and wood fire from the unit and dispensed it into the air outside the home. True potbelly stoves in good condition should have this attached (they’ll require one if you intend to put them to use).

The Value of Antique Stoves

The value of antique potbelly stoves differs according to desirability, rarity, and – of course – condition. Cracks in the stove render it potentially dangerous to use, whilst rust impairs not only its strength and durability but also its aesthetic value.

If you have an antique potbelly stove that you wish to sell, we highly recommend considering fully-restoring it before you bring it to the auction. Unlike some other antiques, a competent restoration job will drastically increase an antique stove’s worth.

Potbelly stoves, regardless of their original splendor, are of little use to the modern buyer if they are broken or damaged beyond repair. Having said that, they can still fetch $150-$800 depending upon the make and model.

Used but poor-moderate condition antique potbellies, provided they are still working, tend to demand a much more respectable price at the market. Such stoves, depending upon their working condition and the intricacy of their design, can fetch anywhere from $300-$2,000 in the right hands.

There is a particularly thriving market these days for fully-restored and working antique potbelly stoves.

Part of the reason for this is that few (if any) antique stoves can be legally used as wood burners or coal burners in the home, due to the fact that the emissions are far too high to be used safely and responsibly in light of our current understanding of the climate crisis. As such, insurance companies will not insure your home unless your wood burner is up to code.

That’s why companies like Good Time Stove have set about refitting antique potbellies for use in the modern home of today’s world whilst at the same time preserving the authenticity and appeal of the original unit.

Here’s a short list of various types of potbelly stove Good Time Stove have for sale on their site, along with the value as stated there:

To learn how to restore your own antique stove to sellable condition, read on!

How to restore antique potbelly stoves to working condition

There are several important steps you need to take in order to restore your old, rusty, dirty potbelly stove to a condition in which you can use it, or sell it. Below are a number of steps we recommend you should carefully follow.

How to restore and clean antique potbelly stoves:

Potbelly stoves continue to attract buyers and sellers all around the world, though nowhere are they quite so popular as in the USA, where the rustic cast iron look is reminiscent of the Wild, Wild West, and thus a famous symbol of Americana. You can find potbelly stoves and their parts for sale by professional restorers as well as amateur enthusiasts on Etsy, eBay, online auction houses, and in local antique stores.