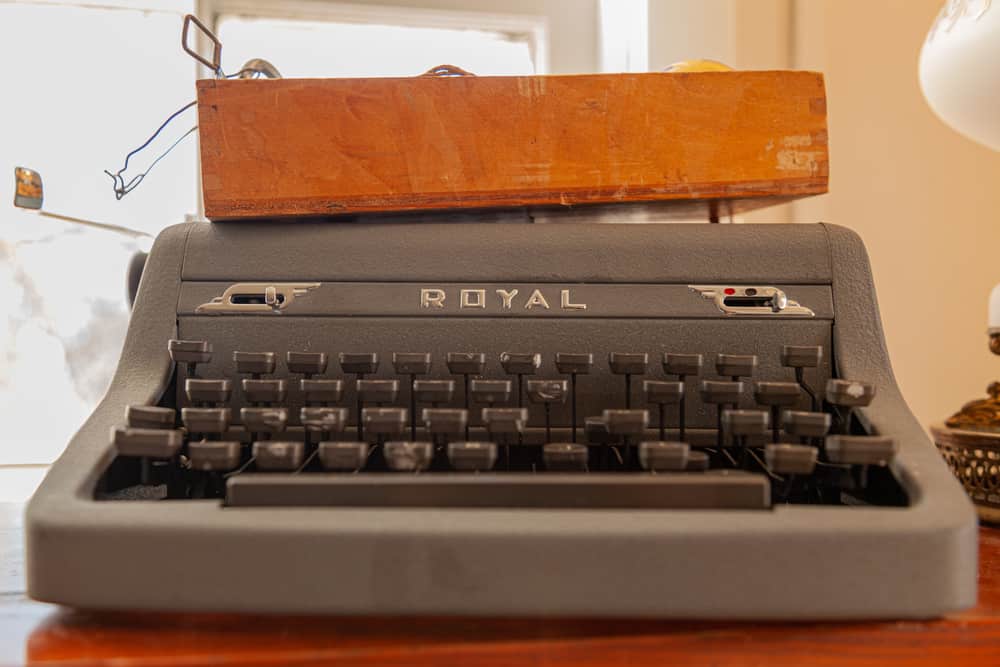 Antique typewriters have increased in popularity over the past decades due to their appeal as a vintage item and their functionality. In particular, Royal typewriters are some of the most highly coveted vintage typewriters for collectors.

If you want to learn more about the history of the Royal Typewriter Company and how you can find an antique Royal typewriter, keep on reading!

In 1904, Edward B. Hess and Lewis C. Myers founded the Royal Typewriter Company with additional financial support from Thomas Fortune Ryan. The company’s location was in New York City, with its factory located in Connecticut.

In 1906, the company released the first Royal typewriter, the Royal Standard. This typewriter had several innovations, including being the first typewriter to have a flatbed design. After that came the Royal 5, and eventually the Royal 10, which was the company’s most successful typewriter.

Royal continued to release new models in the following decades, including the first electric typewriter. Today, the company has branched out to other desk supplies, such as cash registers and printers, but still produces modern typewriters.

How to Identify an Antique Royal Typewriter

If you own an old typewriter, there are a few things to look for to determine if it’s a Royal one. These factors can also be helpful if you want to buy an antique Royal typewriter but are not sure what model it is.

One of the first things you should look for is the Royal brand name with its unique lettering. Also, the body of almost all vintage Royal typewriters was black. Another telltale sign of Royal typewriters is the gold (or silver in the model 10) lettering that lists all of the typewriter’s patents.

But, the most important thing to find is the serial number located on the back, sides, or even inside the machine. Once you find it, search it up on a typewriter database. There, you’ll discover if your typewriter is one by Royal and its date of manufacture.

How Much Is an Antique Royal Typewriter Worth?

The original Royal typewriter and the first one with a flatbed design. The “standard” in the name refers to the standard full-size design of the typewriters. This meant that these typewriters could only be stationary due to their bulk.

Since this is the first model of the Royal Typewriter Company, its value is very high for historical and collecting purposes. Especially for machines in good condition or have been professionally refurbished, prices can reach up to several hundreds of dollars.

A successor to the Royal Standard, the Model 10 came out in 1914 and was by far Royal’s best-selling typewriter. The Model 10 came with a traditional upright design and featured beveled glass panes on its sides.

Due to its historical significance and being the flagship for typewriters in the United States, the Model 10 usually fetches high prices. They can be worth anywhere from a few hundred dollars, if you want one in working condition, up to a few thousand dollars for one in perfect condition.

The next big step for the Royal Typewriter Company was portable typewriters. However, this step came in 1926, much later than its competitors. The purpose of this category of typewriters was to be lighter so they could be moved around more easily.

The first portable typewriter and one of the most notable by Royal was the Royal Model P, which came in different colors like green or red. You can generally find the model P for a few hundred dollars, depending on its condition.

Another significant model from the Royal Portables line was the Royal Quiet De Luxe. It was released in 1939 and became famous because it was a favorite of Ernest Hemingway. It also had new features like the “Magic Margin” -which allowed you to set both the right and left margin simultaneously- and a paper lock scale.

You can generally find the Quiet De Luxe for around a few hundred dollars, similar to the Model P. In 1947, Royal released a limited edition Quiet De Luxe in gold, which was used in the James Bond movie Goldeneye.

How Do I Sell My Royal Typewriter?

Now that you’ve determined which Royal typewriter you have, the question becomes what you can do with it. One option is to sell it. If you want to do this in person, you can take it to a local thrift store or antique store. There, you’ll be able to sell your typewriter for cash easily. You can even try a local auction if you prefer.

If you know the exact model and value of your antique Royal Typewriter, you can also try selling it online. Sites like eBay and Etsy are always good options for selling used or vintage items. Ensure to provide any relevant details about the typewriter and be specific about the condition of your machine and if you have done any repairs on it.

If you’re looking to buy an antique Royal typewriter, your options are pretty much the same. If you shop for one online, make sure to contact the seller with any questions you have.

Also, since these machines can be very hefty, you might want to consider picking one up in person or see if the seller provides free shipping. Finally, make sure the seller offers refunds if you’re not happy with your purchase.

Even though we live in an era that is dominated by computers and technology, vintage typewriters have been more prevalent than ever. Some people enjoy their aesthetic, whereas others prefer them for the smooth typing experience that a manual typewriter offers.

Either way, if you’re looking to buy an antique Royal typewriter -or any other vintage typewriter-there are several options on the market. Similarly, you’ll have no trouble selling your old typewriter. Plus, it could potentially fetch a high price if it’s a collectible model.