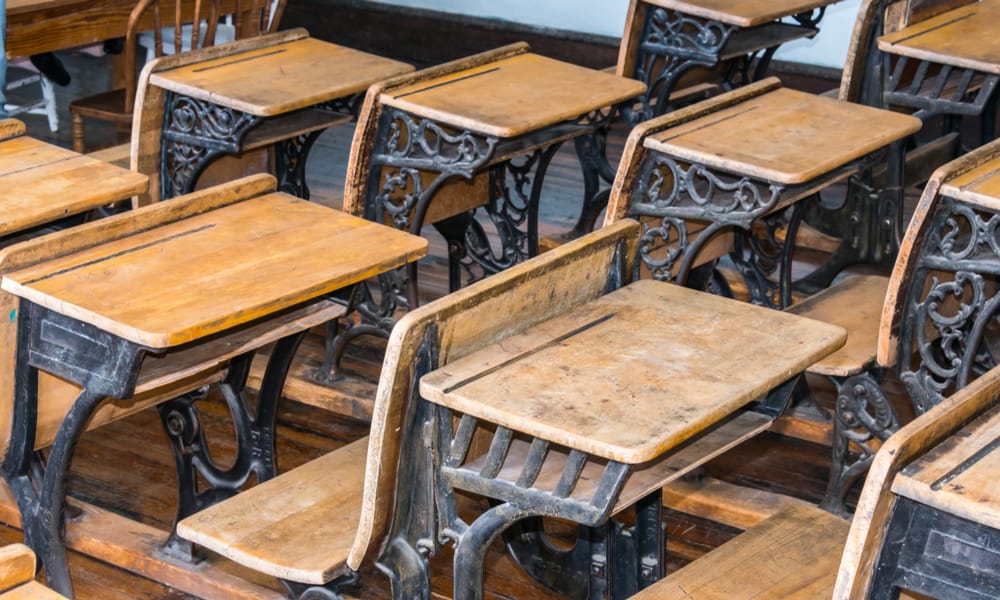 A school desk is a piece of furniture that associates each of us with childhood and school age. It symbolizes school as the institution and the period when we learned the basics of mathematics, reading, and writing. A school desk is considered an antique if it is at least a century old.

Nowadays, you can see antique school desks in museums and home collections and follow the design transformations over the years. It is possible to find a wide range of models on the current market, from plain wooden benches to lavishly designed iron school desks. Let’s see. 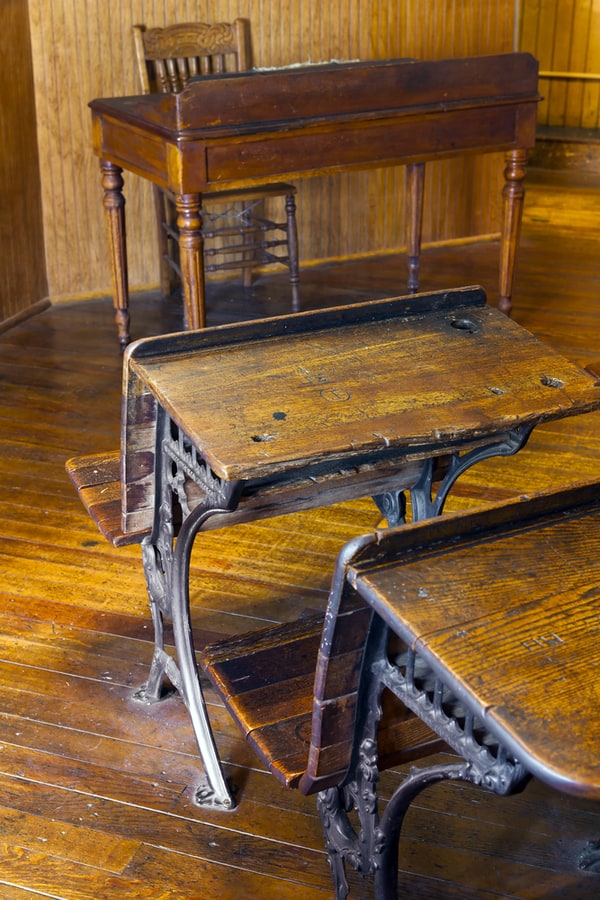 The education reform of the mid-1800s created a public school system. That’s why there was a need for school furniture, primarily for school desks.

Furniture designers made an effort to create models that were supposed to meet students’ needs without taking up too much space. Most models had tables attached to the chairs’ backs, and their layout was in columns.

The first patent for the school desk was filed in 1868 by Herbert L. Andrews from Chicago. His model’s main advantage was the adjustable table height, increasing the students’ comfort. 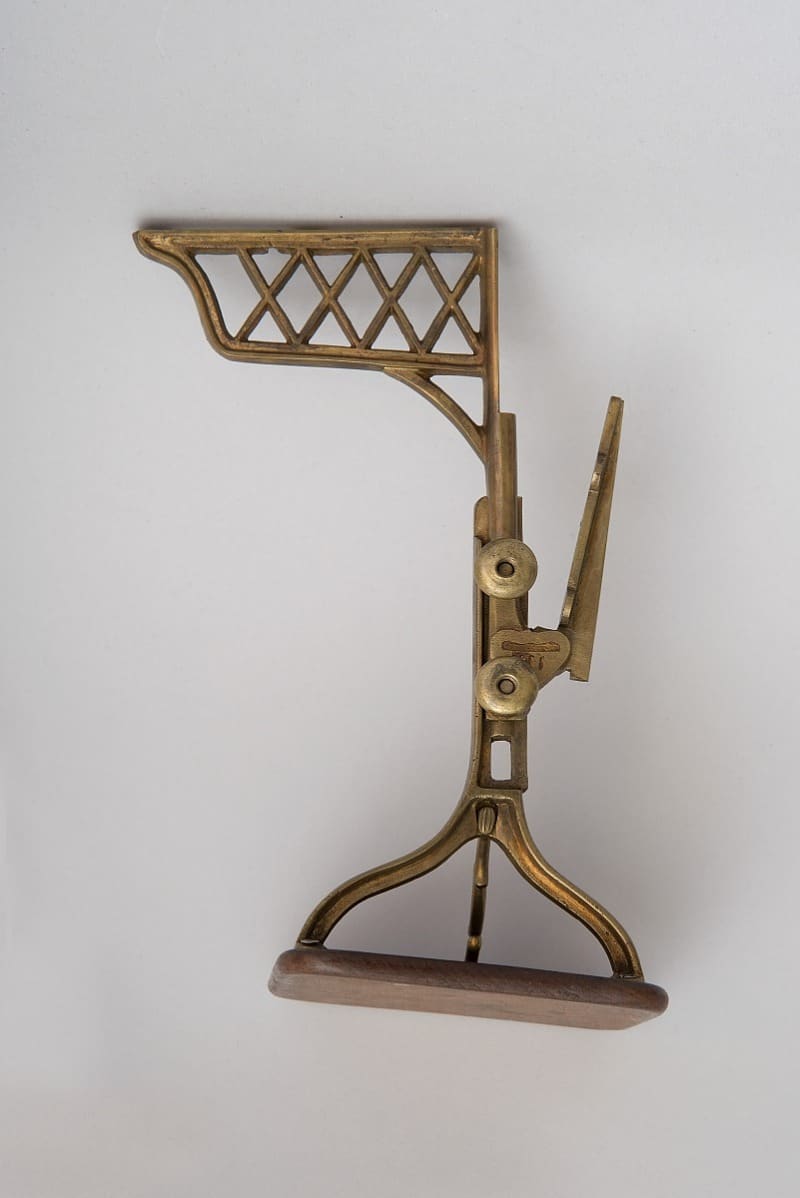 However, the most popular was a D. Loughlin’s design that he made in his Sidney School Furniture Co. in Ohio. His fashion desk first appeared in 1881 and had a very successful sale. Unfortunately, Loughlin didn’t patent his model, and many took advantage of its design. 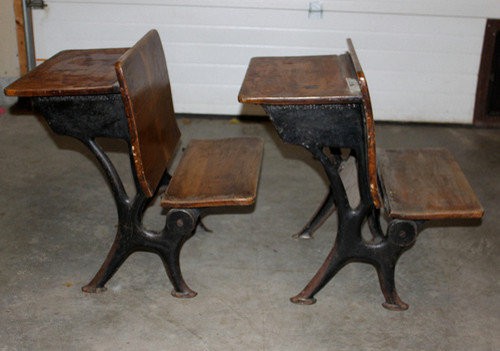 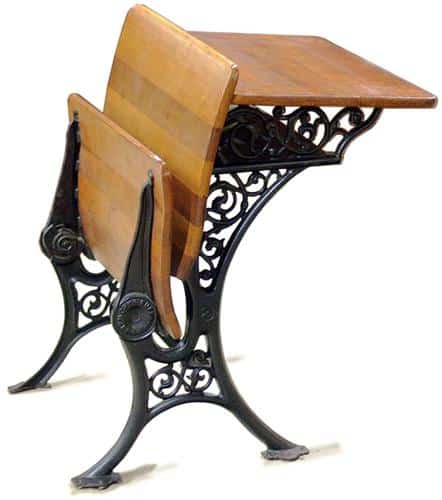 As one of the first women designers, she was considered the mother of invention because of her innovative desk. Breadin’s style changed the design concept of school desks, and her pieces’ value in the current antique market could be worth a few thousand dollars. 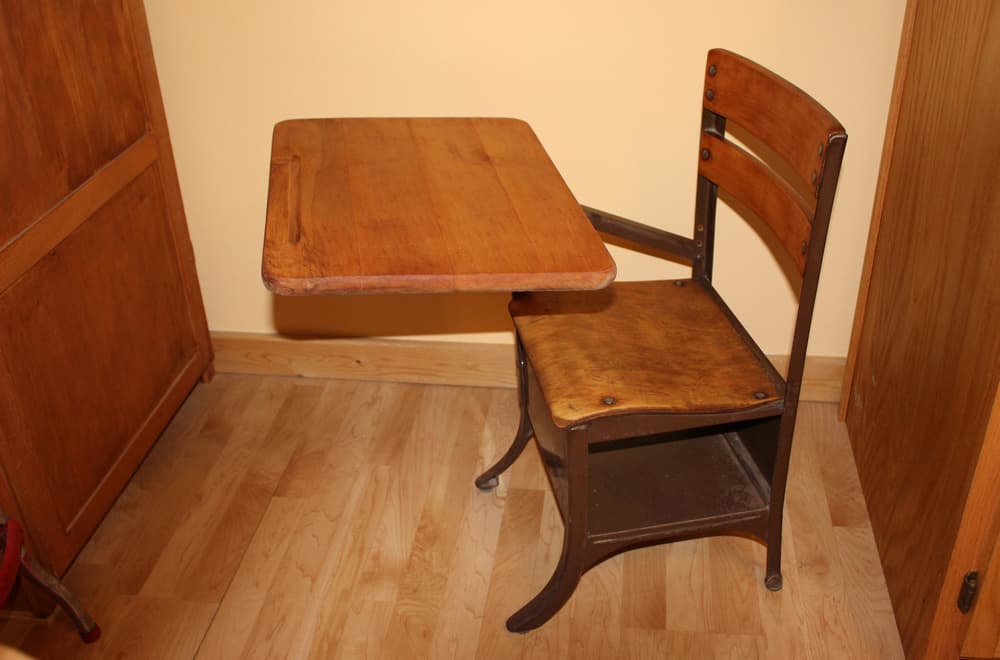 For years, manufacturers have changed styles in the school desk production while searching for the best solution. There was a need to provide student comfort and a quality arrangement of desks in the classroom, which led to different configurations. Some of the most common were:

The school desk has gone through various phases over the years. Its development began with a classic wooden bench from the early 18th century and continued with a modern chrome design from the mid-20th century. 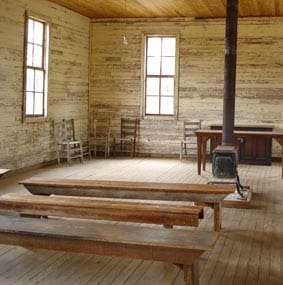 Schooling in the 18th century was quite different from today. Many students dropped out of school early due to marriage, employment, or possible home-schooling. The schoolhouses were small and included students of several grades or education levels.

The school desk from that period included a wooden bench designed for several students to sit at the same time. This simple bench didn’t allow for practical learning. Still, it provided a possibility to focus on students who had the desire and opportunity to attend school. 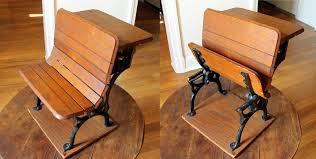 This school desk type appeared in the late 1800s, and the design originated from Ohio, more precisely from the Sydney School Furniture Company. The combination of a desk and a chair allowed individual sitting, and students could use the table in front of them. 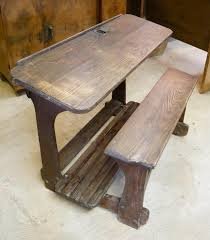 The Rettig school desk originated from Germany. It became one of the most popular school desks soon after its appearance in 1895. The table surface was in front of the chair, and its inclination provided plenty of writing space.

This bench could accommodate two students, and the increased support allowed them easier entry and exit. Plus, this kind of design saved space in the classroom. 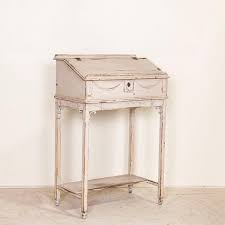 The standing school desk appeared at the end of the 19th century, and its appearance was very similar to the fashion school desk look.

Nevertheless, this model differed because it came with a mechanism that overlapped the seats. Students could use the table in front of them while sitting or fold the seats, push the table upper, and then work standing up when needed.

While this desk type was usual in upper classrooms, this was not the case with younger students. In the younger grades, teachers required students to stand while answering questions.

Although the standing school desk was current a little more than 120 years ago, doctors recommend this model nowadays. There are numerous proofs that prolonged sitting adversely affects blood circulation, making these standing tables a healthy option for kids. 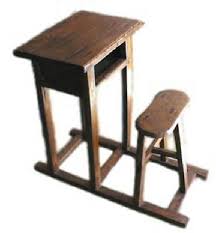 The Chinese bench school desk from the early 19th century differed from its European and American counterparts from the same period. This school desk type is entirely wood constructed and created for only one student.

The model consisted of a seat and a chair and differed in storage space. It was the first time a pull-out drawer became the storage space instead of the open space under the table. Western designers accepted this convenient, creative solution in their later models. 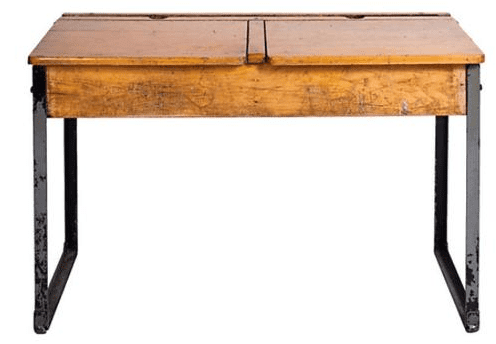 The Welsh school desk from the 1920s was a bench model for two students. However, chairs weren’t attached to the bench, so this allowed the addition of more chairs when needed.

The school desk work surface was also a cover for the student storage space. That provided a sense of privacy and autonomy for students in European and American classrooms, improving the situation from previous decades. 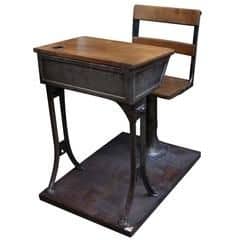 This school desk type from the 1930s showed improvement and innovation compared to previous models. Besides the improved design, this table still had one seat and a storage compartment opened to the student.

However, the most significant innovation was the ability to adjust the table. Although this adjustability was limited, it indicated an increased concern for the students’ comfort and well-being. It probably led to more regular school attendance, making school a notable factor in everyday life. 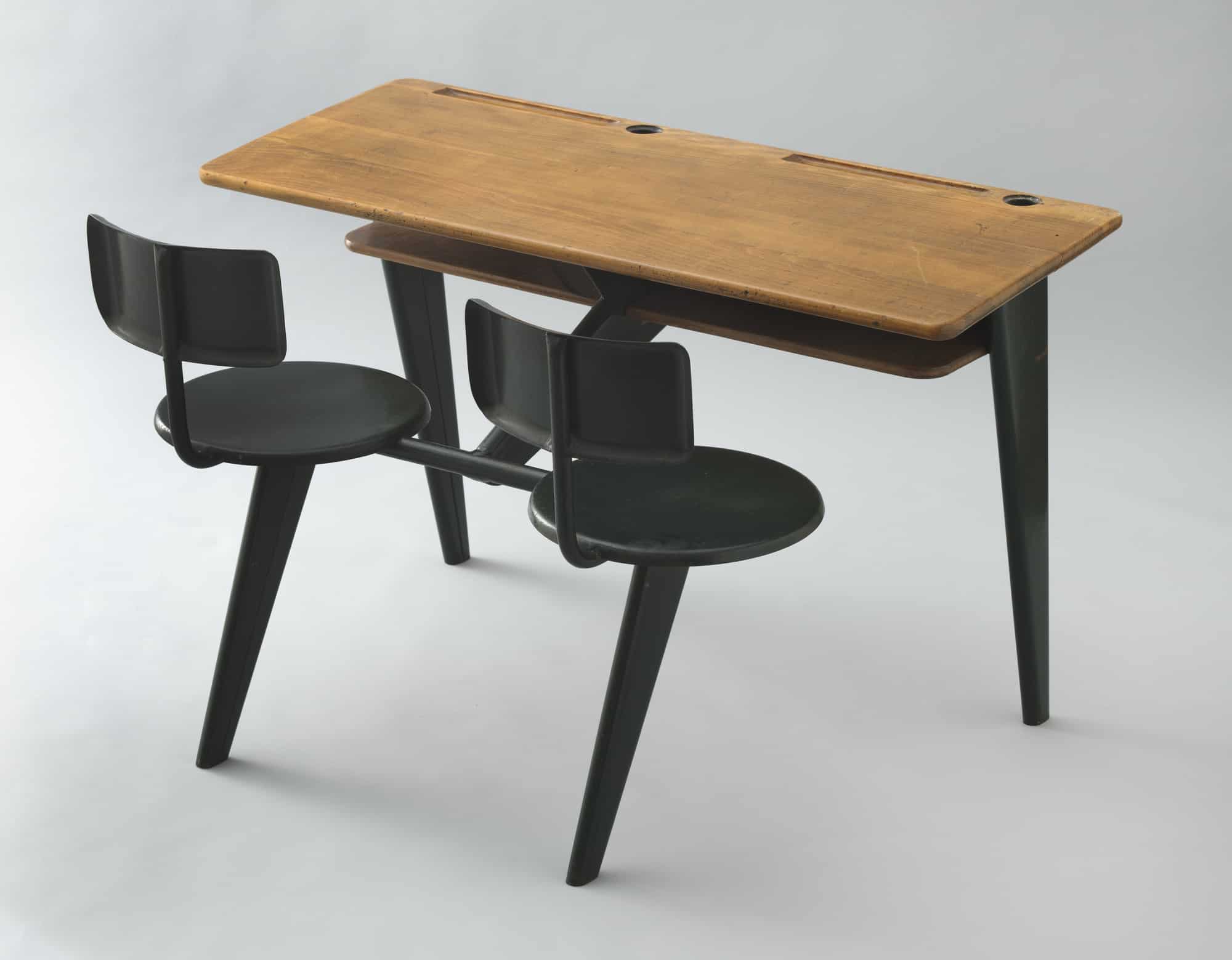 Jean Prouvé’s school desk from 1935 was a simple wood and steel composition. That was also a very economical combination on the very threshold of World War II.

The two-seater desk was a message of unity and loyalty in the face of the growing Nazism pressure. The innovative storage space allowed students to access their belongings without moving objects on the table. 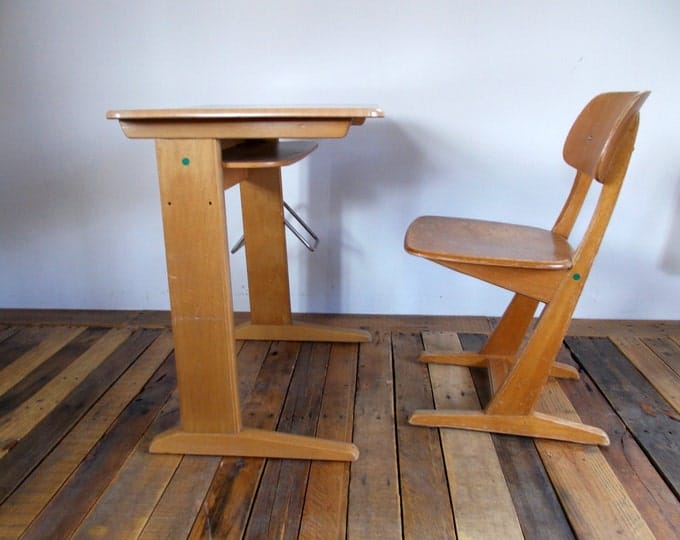 This 1950s school desk model allowed for more effortless classroom organization and greater student autonomy. In this case, the table and chairs were separate units, and the material used for their construction was wood.

A different finish from the previous models improved the durability despite the construction’s minimalist look. This simplified Danish model made it easy to change the classroom layout. Plus, stacking during cleaning and storage was significantly facilitated. 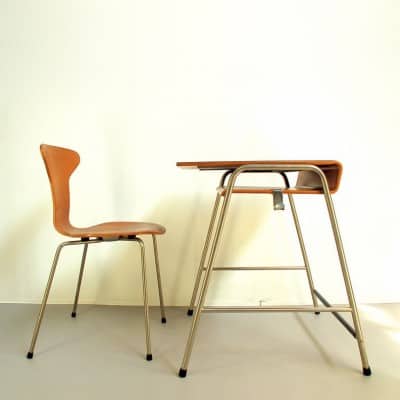 In 1955, the Munkegaard School in Denmark commissioned school desks for its needs from Danish architect and furniture designer Arne Jacobsen. That’s why only 300 such school desks existed.

This model had an aerodynamic, modern design and included a separate table and chair. The work surface was aquamarine, with open storage space, and each unit was made of one wooden board. 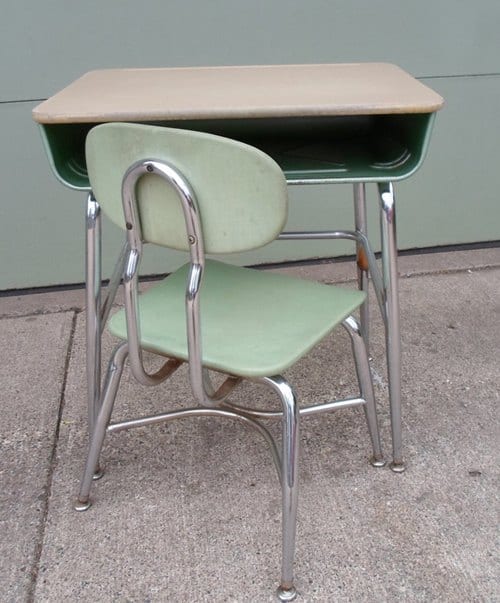 The overall design modernization also impacted the school desk’s look. During the 1960s, they were made of chrome and plastic instead of expensive materials such as wood and steel.

Like the old models from the 1920s, these tables also had space to store things. By lifting the worktop, the student could put belongings away. The contemporary design followed the example of Munkegaard’s table, using lovely and fun colors. 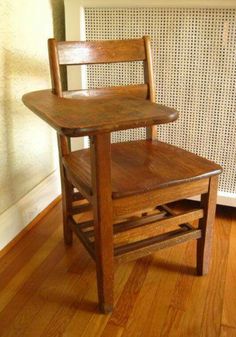 This school desk model appeared during the 1970s and is still in use in some schools today. The innovation was the storage space position since it changed the former place. Instead of under the worktop as before, the storage space is under the seat in this model.

In addition, the worktable is not a separate unit but is attached to the chair’s right side. Unfortunately, this model is not appropriate for left-handed students.

On the other hand, this easily portable school desk type is practical and saves classroom space, thanks to its size. Although this model was initially wooden, modern desks are typically made of chrome and plastic. 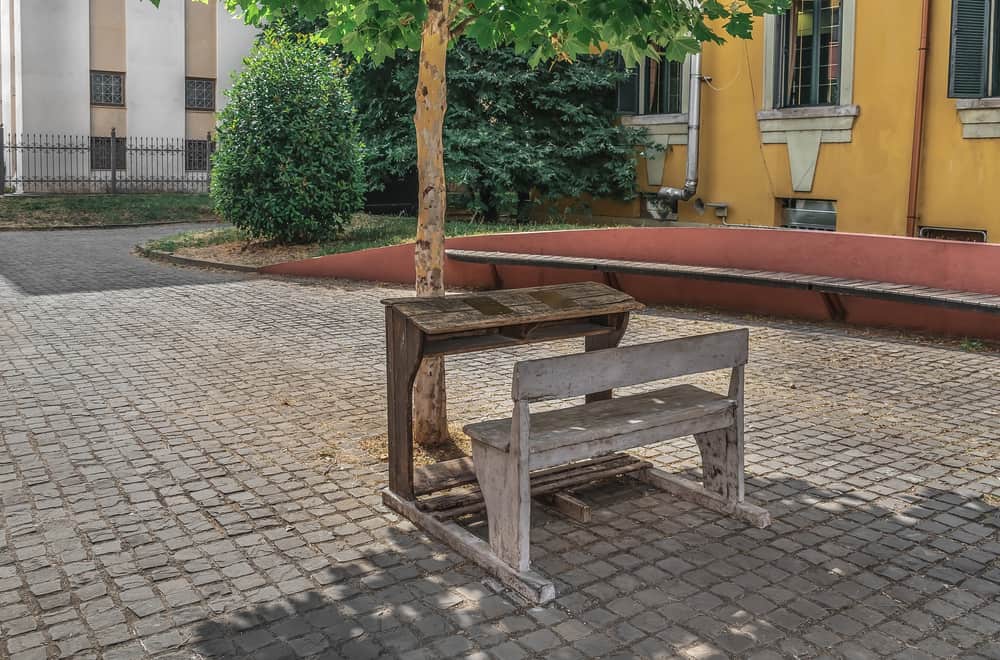 The school desks’ primary value lies in their age. The antique pieces are typically worth $75 to $250, depending on their condition and design complexity. Keep in mind that even the wood type can affect the value of the desk. For instance, you need to set aside at least $1,000 for a table made of Old Mission oak.

Benches and chairs with legs made of wrought iron have a special place at the market. Their prices are typically over $50, but it primarily depends on the design complexity.

Be aware that there is a clear difference between vintage designs from the first half of the 20th century and at least 100 years old antique school desks. Even though age affects their value the most, you need to check a few more things, including:

In order to have significant value on the market, the school desk needs to be in good condition. Collectors avoid purchasing a worn and damaged products and those that require thorough restoration.

Antique school desks sometimes have interesting details, such as scrolls and top designs on iron. As expected, they are typically more expensive when coming with a more beautiful and detailed design.

In such a case, it is necessary to ask the seller for some proof of historical significance or a certificate of authenticity.

It is logical to expect that the antique school desk representation varies in different parts of the US since some areas had fewer desks available than others. Consequently, the more difficult the desks are to find, the more valuable they will be. 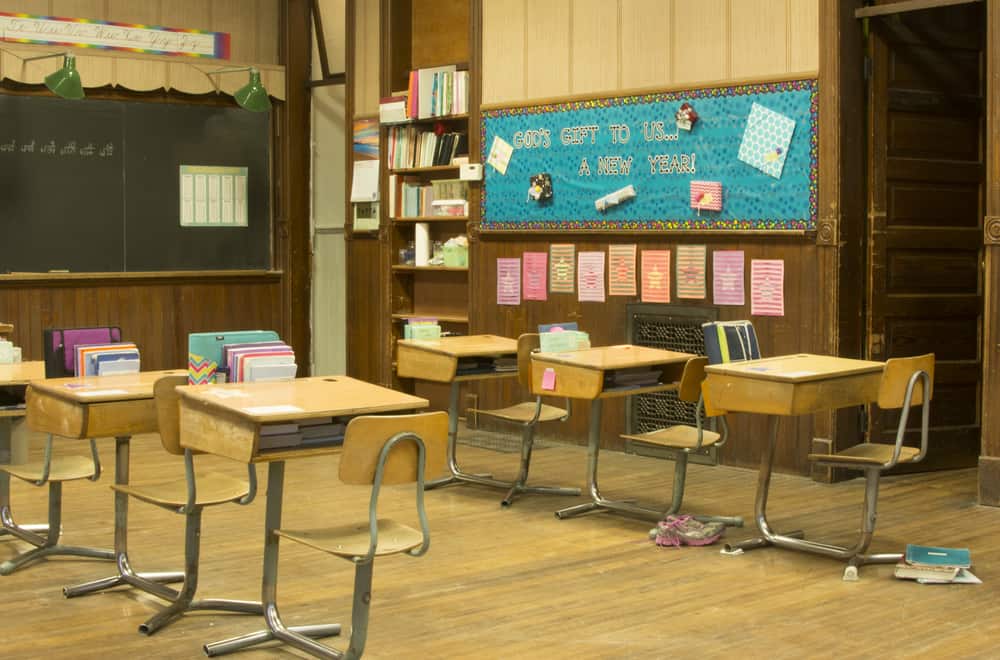 If you have a sensitive antique school desk, it is advisable to leave its restoration to a professional. On the other hand, you can extend its life by following several valuable techniques.

Exposing an antique school desk to water, mold, or sun will negatively affect wood over the years. As a result, you may notice cracks and dirt stains on its surface.

In most cases, it is possible to prevent these changes and restore the natural wood patina by applying wax or wood oil over the surface. However, protecting this piece of furniture from harsh weather and direct sunlight is always the best possible solution.

The deep cleansing process with water, soap, and a soft cloth can bring life back to your school desk. Be careful with removing the bolts and nuts during the process. The best option is to mark them before removing them to know where to return each piece after tidying up.

Sometimes it can be heavy to define the use-value of some antique furniture pieces. That is certainly not the case with antique school desks. In addition to being beautiful, these pieces of furniture can be helpful since they take up little space and provide convenient storage space.