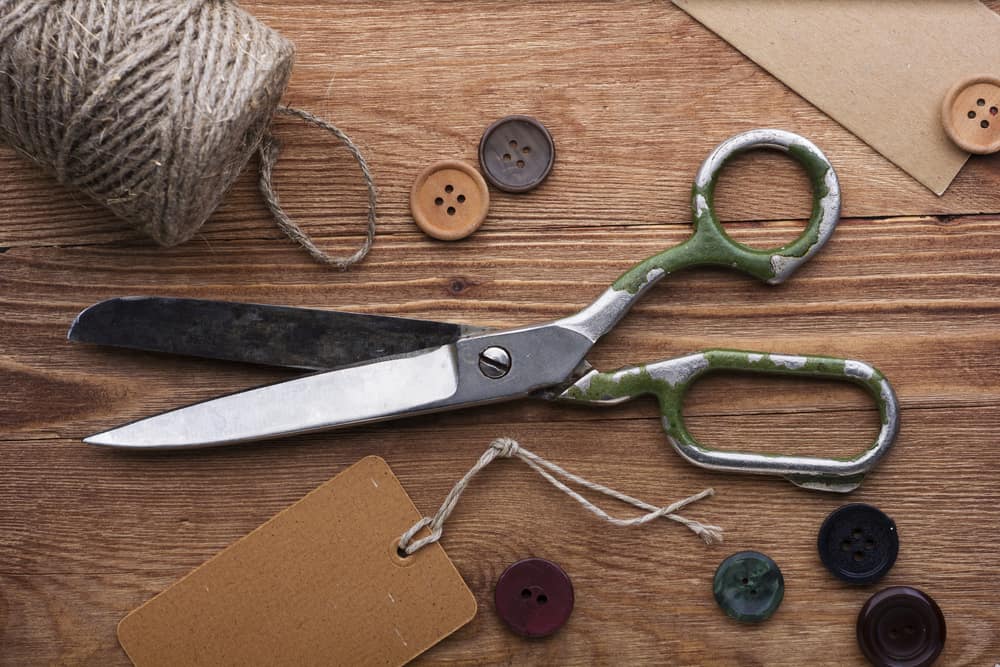 Most of us have at least one pair of scissors at home. Many of us have more than one pair. We have scissors for different purposes like cutting paper, cutting fabric, or cutting nails. But did you know that scissors have been around for thousands of years or that antique scissors can be valuable?

In this article, you will learn more about these everyday items. Here, we have collected information about their history, different manufacturers and types of antique scissors. You will also find out how to identify antique and vintage scissors and how to restore them as well as how to work out the value of antique scissors.

The inventor Leonardo da Vinci has often been credited as the person who invented scissors because he used a scissor-like device to cut canvas. However, the invention of scissors predates da Vinci by nearly three thousand years according to the earliest evidence.

Scissors during the ancient times

There is evidence that shows the ancient Egyptians using a version of scissors as early as 1500 BC. They used a device, typically made of bronze, with two blades controlled by a metal strip that kept the blades apart until they were squeezed. From Egypt, they spread to other parts of the world through trade.

Around 100 AD, the Egyptian design reached Rome. The Romans adapted the design and created cross-blade scissors closer to the style of scissors we have today. The scissors were mostly made of bronze, but sometimes iron was used, too.

Scissors during the Middle Ages and Renaissance

How scissors were made changed during the Middle Ages and Renaissance when spring scissors were created by first heating and shaping a straight bar of metal. It was then bent into a curve and tempered.

These scissors had two sharp blades that were connected at one end. The user would squeeze them together to perform a cutting action. The blades opened again once the hold was released.

The 18th century brought along the industrial era and made it possible to manufacture scissors in large quantities. In 1761, Robert Hinchliffe of Cheney Square, London, England, produced the first modern-day scissors. He advertised himself as a “fine scissor manufacturer”.

These scissors were pivoted, which means the blades were connected at a point between the tips and handles. These types of scissors were reportedly used in ancient Rome, China, Japan, and Korea before Hinchliffe made them popular in Europe.

You can find a more in-depth history of scissors on the New World Encyclopedia website.

Sheffield was the headquarters of English scissor production, because of the quality of the steel from Sheffield. One company from the area is Ernest Wright, established in 1902. The company is still in business and known for its handmade scissors.

Another Sheffield company was William Whiteley & Sons, which has been around since 1760 and made scissors for people from all echelons of society, including the Royal Family. The company patented the “sidebent” scissor, which is the blueprint for all dressmaking shears today.

If England had Sheffield, then Germany had Solingen known as the City of Blades. One example of a Solingen-based company making scissors is The Witte Group established in 1792.

The founder of the company was Daniel Peres who established one of the oldest industrial cutlery factories. Later, their product selection grew to include scissors. The company is still running today and making a range of scissors.

Fiskars was founded in 1649 and is one of the oldest companies in the Nordic Countries. In 1832, the company founded its first cutlery mill and expanded from knives to forks and scissors. Fiskars still makes scissors today and their products are known for their durability and high quality.

In the United States of America, there were over one hundred companies making scissors from the mid-19th century until the 1930s. However, there were certain areas in the country where makers of American scissors were more prominent than in others.

For more examples and pictures of manufacturers and their scissors, we recommend this article.

Scissor makers realized early on that not all scissors were suited for all tasks and developed differently sized and shaped scissors better suited for specific tasks. Here are some examples of the type of antique scissors you can find. You might recognize most of the types because many of them are still in use today.

Buttonhole scissors are small, two-handed scissors with a short blade.

Embroidery scissors are small two-handed scissors that have scalloped blades.

Pinking shears are large and have scalloped blades.

Tailoring/Sewing scissors have a flat edge and they are large, two-handed scissors.

How to identify antique scissors?

Some antique scissors may have maker’s marks, but most often this isn’t the case. Since many antique scissors do not have the name of the manufacturer, it can be challenging to identify them. What we suggest is using the heft (the weight) and the materials used to make the scissors.

Old scissors and shears are usually heavier than modern scissors because most of them are made entirely out of steel. Today’s scissors use much lighter materials such as plastic and aluminum. The materials used in antique scissors other than steel were silver, gold, and brass.

If you need help with identifying a pair of antique scissors, you could try posting a picture of them on an online forum such as Antiquers. Someone might recognize the scissors and help you identify and date them.

How to value antique scissors?

In order to know the value of your antique scissors, you will first need to identify their origin and their date as closely as possible. You then need to determine the value of your scissors and there are a couple of different ways to go about it.

One option is to go to an antique dealer who might give you a price estimate. You could also try an online antique dealer or an auction house. Some of them might value them based on pictures. However, bear in mind that you may have to pay for this service.

Another route is more laborious, and it is to search the internet to find out what scissors currently on sale are selling for. Finding scissors similar to yours will help you decide the price you can ask for them. You can start with websites such as eBay, Etsy, and Collectors Weekly.

What will affect the value of your scissors?

As you can imagine, from the sheer range of manufacturers and types of scissors, the value of antique scissors varies a lot. How your scissors are valued depends on the maker and when the scissors were made.

Condition: The condition of your scissors is important, too. Of course, antique scissors can be restored as we will see a little later on, but scissors that are in a good condition will fetch more. Rust stains and broken springs will lower the value of the scissors.

Rarity: How many copies of the particular pair of scissors were made also affects the value. Mass-produced scissors that all look the same are valued lower than handmade scissors. The most highly-priced scissors are those that were shaped into unique motifs such as different animal shapes.

Material: The material used to make the scissors can make a big difference in the price. Antique gold or silver scissors, especially ones that have unique motifs can be worth a few thousand dollars. If there are precious stones used to decorate the scissors, the value will climb even higher.

Decoration: Antique scissors from Asia and the Middle East can sell for several thousand dollars. They are often intricately decorated and handmade, which instantly increases their value. In fact, some of the most valuable scissors on eBay are from these regions.

One example is a pair of scissors with Islamic Calligraphy from the 18th-century Ottoman Empire. They are decorated with diamonds, rubies, and gold and are selling for $3,500.00.

Other examples of antique scissors for sale

Here we have listed some scissors that are on sale on eBay and Etsy at the moment. Please note that the price is listed in the seller’s currency.

A reminder, if you are buying online, ensure that you are buying from a reputable seller. You should always check their rating and look for any negative feedback before parting with your money because, unfortunately, there are people who sell fake items.

How to restore antique scissors?

Here are some ways you can restore your scissors using materials you have at home. These tricks work for scissors that have been left to collect rust. For more serious restoration, we recommend this video on YouTube.

Antique scissors are a popular collectible item and as we have seen, the best ones are worth a lot of money. But scissor collections don’t need to start with the priciest items. Instead, you can start your collection with more affordable collector’s items, remembering that their value is likely to increase over time.

Whether you are looking to sell a pair of antique scissors you own, or are looking to build your own collection, you can use the information in this article to identify the manufacturer and the date.

Once you have worked out this information, you are ready to buy and sell. And don’t shy away from rusty items. You can get them cheaper and now you know how to restore them.

If you have any questions about collecting or selling antique scissors, we would like to hear them. You can write the questions you might have in the comments section.