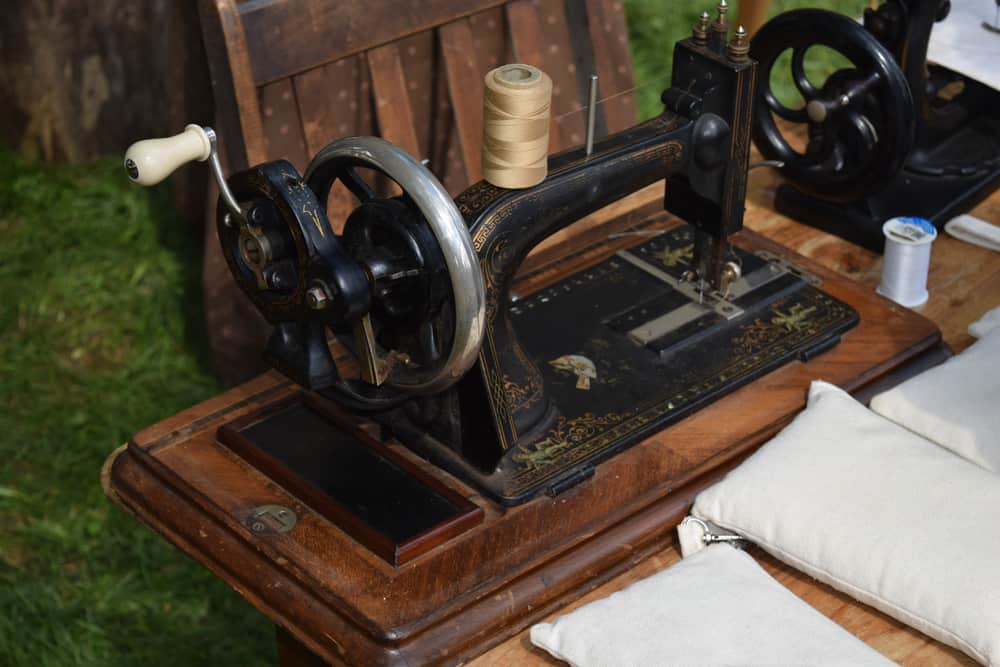 Sewing machine history is very extensive, as these machines were handy tools in the past. Some people still use them today, and they are very collectible items. Several antique sewing brands are popular in the antique market and can fetch high prices.

Do you have an old sewing machine lying around? You should check its manufacturer as it might be more valuable than you think.

In this article, we’ll discuss some of the best antique sewing machine brands. Our list will include famous American brands, as well as European ones and even some that originated in Japan.

Keep reading to find out the most popular and valuable antique sewing machine brands!

There have been several brands that produced great sewing machines over the years. These are some of the best ones:

Singer is by far the most popular and highly coveted sewing machine manufacturer. M. Singer established the brand in Boston in 1851 but soon moved the brand’s headquarters to the city of New York.

Singer has sold the most sewing machines ever due to their popularity and constant presence for over 150 years. Still, some Singer sewing machine models are very rare and popular among collectors.

If you have a Singer sewing machine lying around, have a look at this guide by the brand to determine the rough value of it. Some of the most popular models are the Turtleback and the Featherweight.

The Turtleback is popular because it was the first domestic sewing machine. The Featherweight is very popular and still used to this day for its ability to sew through thick fabrics.

Kenmore is another very well-known name in the antique sewing machine market. This is because the department store Sears has used the brand name Kenmore for its sewing machines since the 1930s.

That’s why you might come across some Kenmore sewing machines under the name Kenmore Sears or Kenmore Sears Roebuck. This relationship ended in 2018 when Sears decided to sell the Kenmore brand name.

Kenmore sewing machines have been manufactured by several brands such as Janome or White. Most of its models were affordable alternatives to high-end Singer models; however, some sewers love their Kenmore machines and swear by them.

The brand’s most well-known models were manufactured after the 1940s, so they aren’t considered antiques. But, they are still popular and can fetch high prices.

Kenmore’s most popular model is the “30 stitch”, which was very fast, had a zigzag stitch, and featured 30 different stitch patterns, hence its name.

White was another prevalent sewing machine manufacturer up until its acquisition by Electrolux in 1986. Originally founded in 1858 by Thomas H. White, White Sewing Machine Company was the primary competitor to the huge brand name of Singer.

White offered excellent value for money options for households that couldn’t afford to purchase Singer machines. It also produced the sewing machines for Sears Roebuck until the 1950s.

White machines worked reliably for many years, which is why you can still find them in the antique market for relatively low prices. Also, White was very famous for its attractive furniture. That’s why antique sewing machine tables from White usually fetch high prices.

The National Sewing Machine Company was a huge manufacturer during the 19th and 20th centuries. It originally produced many different machines, including toys. However, its most significant sales came from its sewing machines.

National Sewing Machine Company, like several other brands, manufactured sewing machines and sold them to large retailers. These retailers would brand these machines as their own and sell them in department stores. One such example was Montgomery Ward.

Unfortunately, National couldn’t sustain itself after World War II and ceased production in 1954. Since it’s been out of business for so long, some of its machines are very hard to find and can cost you a lot of money.

The partnership of the two owners formed when Wheeler decided to help mass-produce a sewing machine that Wilson had designed. This one design led to many more to the point where Wheeler & Wilson had the most sewing machine sales in the United States by 1859.

Unfortunately, both owners died by the end of the 19th century. While the brand did continue its production for a few years, it was eventually purchased by Singer. Singer continued to produce some popular Wheeler & Wilson models like their model number 9 for a few more years

Today, if you search hard enough, you can find some Wheeler & Wilson antique sewing machines for relatively low prices.

Pfaff is generally regarded as one of the best European sewing machine brands. It was founded by George Michael Pfaff, in Kaiserslautern, Germany, in 1862, and the owner quickly expanded the brand with a shop in London in 1885.

The first Pfaff sewing machine was handmade, and its purpose was to sew leather for shoes. All of its models are considered high-end, and you’ll be lucky to find one in excellent condition for less than $1000.

Pfaff’s most popular model was the 130, which was originally sold during the 1930s. It was a very durable machine that could produce a zigzag stitch pattern with astounding precision.

While Pfaff was independent for many years, it was eventually acquired by Husqvarna Viking in 1999. In 2006, the owner of Singer purchased the group that included Viking and Pfaff and created the SVP Worldwide company.

Bernina is another well-established European sewing machine brand. It was initially founded in Steckborn, Switzerland, by Fritz Gegauf in 1893. It’s one of the few brands that remain independent and family-owned but has allocated some of its production to Thailand.

Bernina has consistently produced high-quality, durable sewing machines with all-metal parts. That’s why some of its best models like the 800 series, the 730, and the 930 can reach a few thousand dollars if they’re in good condition.

If you’re looking for a high-end antique sewing machine to invest in, Bernina sewing machines are probably your best option. However, if you want a more affordable alternative, there’s Bernina’s sub-brand Bernette.

Janome is a very famous sewing machine manufacturer that comes from Japan. Although it was originally founded during the 1920s, the brand name Janome was established in 1954. Janome also owns the brand Elna in Switzerland.

Janome is famous for many innovations, including being the first manufacturer to develop and popularize the computerized sewing machine. Janome was also a manufacturer of different sewing machines that large retailers like Sears sold.

Despite still being in production, it can be challenging to find vintage sewing machines from Janome. This is due to the Japanese origin of the brand, as well as its many name changes. However, their rarity doesn’t make them expensive.

If you find an authentic Janome sewing machine, you’ll probably have to pay a few hundred dollars to get it. With this amount of money, you get a reliable and reputable sewing machine to add to your collection.

Juki is a relatively young brand that has climbed to the top of the sewing machine market. It specializes in industrial sewing machines but also produces several models intended for home use.

Since Juki was established in 1938, its machines are not technically considered antiques, as they aren’t over 100 years old. Still, you can find some very nice Juki vintage machines in the market.

Also, because the brand focuses more on the industrial aspect, some of its models can cost up to a few thousand dollars. But, if you’re an enthusiast and want the best of the best, Juki sewing machines might be for you.

Brother is a multinational electronics company based in Nagoya, Japan. It was founded in 1908 under the name Yasui Sewing Machine Co. In 1955, the brand changed its name to Brother International Corporation.

Before World War II, Brother was known for producing many different machines, primarily for industrial purposes. However, after the war, the brand had a huge expansion and started making various electronics for home use.

Nevertheless, Brother is still famous for its high-quality sewing machines. Its models are pretty common, with most of them going for a few hundred dollars. A notable model from Brother is the Galaxie 221, which features a unique goose-like stitch pattern.

Overall, the antique sewing machine market is vast and consists of several household names like Singer. If you’re an aspiring collector, have a look at some models from the brands we mentioned above.