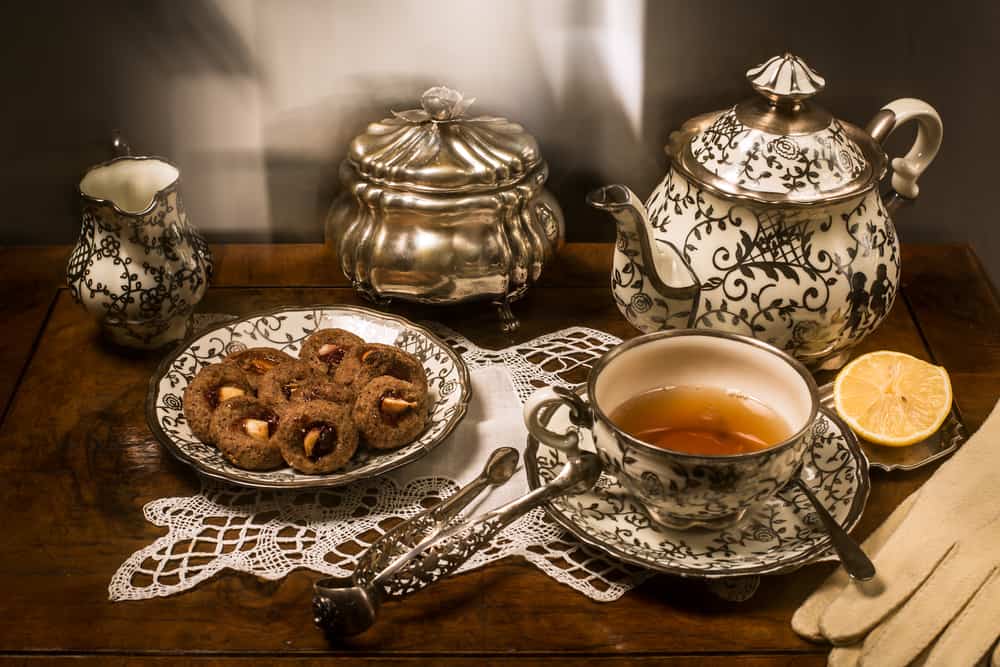 The best tea sets are either made of porcelain or sterling silver. Sterling silver tea sets are especially useful because they are less fragile and can last for centuries. Such sets not only can be a lovely reminder of your family history, but they can also be a popular antique collectible item.

History of the Tea Set

The history of the tea sets begins in ancient China, during the Han Dynasty (206–220 BC). These tea sets were made of porcelain. They were simple and only served as tea containers. With time, these sets evolved and included the teapot, tea tray, small tea cups, sugar tongs, and a sieve to filter out the pieces of the leaves.

When the tea arrived in Europe in the 16th century, porcelain tea sets also arrived. At first, tea was reserved only for royalty, especially for royal women and court ladies. They drank tea from handleless cups standing on saucers. A man called Robert Adams designed tea cups with handles to prevent ladies’ delicate fingers from burning.

Since the English wanted to drink their tea with sugar and milk, Adams created a sugar bowl and milk jug (creamer), along with teaspoons. By the 1700s, the tea was presented on a tray called a tea table. This was the age of “high tea” parties, during which affluent English families visited each other and enjoyed drinking tea.

Around 1790, the first tea sets were made of sterling silver. Tea sets made of this precious metal proved to be durable, heat-retaining, and overall easy to handle. Still, these tea sets didn’t become popular until the Victorian age.

Queen Victoria loved to drink tea and even mentioned it hundreds of times in her journal. She influenced the rest of the world, and drinking the tea became even more widespread, with sterling silver tea sets finally gaining more popularity.

How can You Tell if an Antique Silver Tea Set is Real?

For a start, you want to check if your tea set is actually made of silver. Look for markings that indicate silver content, for example, 900, 925, or 800. Next, take a magnet and see if it is drawn to your tea set. If it is, your set isn’t silver, as silver isn’t magnetic.

With time, real silver oxidizes and tarnishes. It’s not real silver if you can’t find either of these on your tea set. If your tea set has a metal aroma when you sniff it, it isn’t entirely made of sterling silver. It was either made from another material, or it was made of the silverplated base material.

Is Your Silver Tea Set Really An Antique?

There are many copies and reproductions out there, but fortunately, there is a way to tell if you’re looking at a genuine antique sterling set.

A real antique silver tea set will show signs of wear and tear, so try to look for those signs. Also, look for patina. Old silver tea sets will have traces of patina on their surface.

However, antique tea sets shouldn’t have mold lines, so if you see a silver tea set with prominent mold lines, it is not antique. When you pick it up, how does it feel? If it feels very light, it is probably not antique.

Manufacturers often marked their silver tea sets with silver hallmarks, so try to find any marks that could tell you more about the manufacturer and the year of production.

What is a Silver Tea Set Worth?

The value of the silver tea set covers a wide range, from a few hundred dollars to several thousand. These value variations depend on several factors.

If an antique silver tea set is made of silverplated base metal rather than solid silver, its monetary value will be reduced. However, that doesn’t mean that silverplate tea sets are worthless: they can still reach the price of several hundred dollars and more.

The total weight of an antique silver tea set can also determine its worth. More weight usually means more pieces, and the more additional pieces a set contains, the higher its worth is.

One antique silver tea set needs to have at least three pieces: teapot, sugar pot, and milk/cream jug. If this set also has a tray, its value can multiply. Some tea sets will have six or more pieces, and they will be worth several thousand dollars.

However, when you see a silver tea set with many pieces, you need to check the markings on each piece. These markings should match, otherwise, the set pieces don’t actually belong to the same set.

Although some signs of age are to be expected in antique silver tea sets, if that tea set is in poor shape, its value will be reduced. Scratches, dents, and missing parts will certainly lower the value of the tea set.

Obviously, the goal of collecting antiques is to find the oldest examples. Old silver tea sets will have much more value than newer ones. The only exception to this rule is when the older set is in a bad condition or lacks one or more pieces.

A tea set will have more value if it has some special and unique details. One such detail is hand chasing, a process during which a silversmith uses tools to produce beautifully textured designs on the silver’s surface.

Accents made of various materials, such as bakelite, an early form of plastic, can be seen on some tea sets. Although the inclusion of plastic in a silver tea service might sound odd, this process was popular during the Art Deco period, and many antique collectors find such sets especially interesting.

Figural elements are tridimensional decorative details, usually depicting flowers, foliage, people, and animals. They were especially popular during the Art Nouveau period in the Victorian era.

Certain tea sets are rarer than the others, and their value is naturally higher because it is harder to find them.

Valuable Tea Sets Around The World

Now that we went over some factors that determine the value of tea sets, let’s take a look at some of the most valuable antique tea sets:

This tea set has beautiful figural elements that show a woman riding a horse, while men are hunting with their dogs. Although it shows signs of tarnish, this stunning 5-piece tea set has an estimated value of approximately $49,306.29. Its value would be even higher if this set came with a tray.

Another valuable tea set, this Georg Jensen tea set has beautiful wooden handles and a long enough spout to enable smooth pouring. Produced in the early 20th century in Copenhagen, Denmark, this tea set is worth $56,046.15, and it can also serve as a coffee set.

The 19th-century 3-piece silver-plate tea set might be more affordable and simpler than the other items from this list, but its gorgeous detailing makes it interesting to collectors. Its estimated price is $401.12.

So, if you have some silver teapots laying around, you should consider evaluating their worth and possibly selling them! If you are not interested in selling them, you can feel proud knowing that you own such valuable items.

Do you own any antique silver tea sets? Were they a family heirloom that you inherited, or did you buy them somewhere? Do they have any interesting details? Write in the comments, I’d love to hear more!