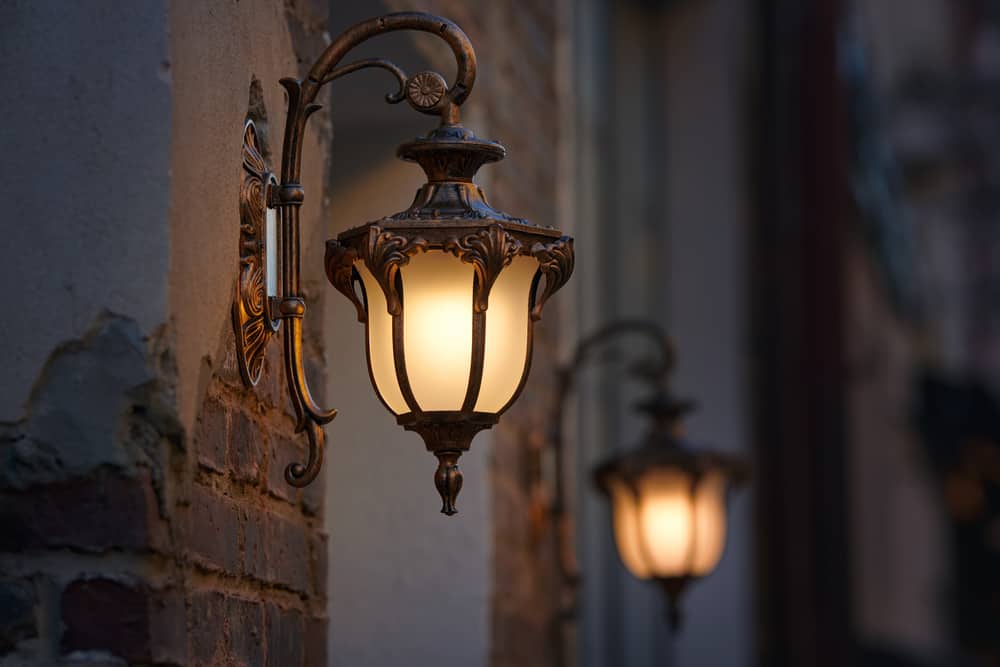 When I was a little girl I remember walking down the streets with my mum and admiring the street candelabras. Something about them made me feel like I’m in some kind of a fairytale. Maybe because I saw them in Beauty and The Beast cartoon?

Even today, when I’m much older, I’m still drawn to the antique street lights and their subtle beaming glow. It seems like every street, park, or promenade instantly becomes more romantic and Instagramable under these soft and fuzzy lights.

Now that I told you how and why I am fascinated with antique street lights, it is time for me to share all I learned about them as well, so shall we start?

The illumination was so weak and narrow that the streets were still dark. However, in the early 19th century both Western Europe and the United States transitioned to using gas-powered public lightning. These lights as well needed someone to maintain and turn them on.

The lamplighters would start their shifts before dusk to make sure all the lamps were turned on at the same time. Their shift would end in the dawn when they would repeat their route to extinguish all the lights.

Have you all noticed how street lamps have horizontal ladder bars? Well, those initially had a purpose, but today they only serve as a decoration. Anyhow, those short arms would support the ladders that lamplighters used to reach the lamp post and turn it on.

Gaslight lamps provided at least ten times brighter light than the oil lamps, yet the streets were still dim. The problem was that this light was yellowish and not very bright so you couldn’t distinguish names or numbers on the doors if you were on a sidewalk.

How do antique street lights work?

The street gas lights also called Victorian lights worked at the same principle as the house gas lights people used in their homes. The flame from the lighted gas heated up mantles which then started to emit the light.

The only difference between them was that street lights produced a brighter glow due to the fact they had more gas jets and each has its own mantle. In case the mantles needed replacing the light started to flicker which was a clear sign for lamplighters that they need to refill the gas.

Antique street lights were designed in many different types depending on the manufacturer. However, we can say that there are three main forms. Those are

Naturally, the evolution of street lights occurred over the course of years as technology was advancing. But as they were improving their performance, their overall design and style changed a lot as well. Styles of street lights greatly varied throughout the late part of the 18th century and early 1900s.

These early Victorian lamps were usually made from the most commonly used material in that era – cast iron or wrought iron. Almost all lamp posts were generously decorated with curves and curls.

The fixtures were approximately 10 feet high. This is why all lamp posts had a single short horizontal bar that helped the lamplighter to rest his ladders. Some shorter lamps that were thicker and heavier were called “bollards” just like posts that were used to dock boats and ships.

On top of the lamp pole, there was a clear glass dome, usually made of copper, brass, or cast metal. They had a few window openings that emitted light in all directions. Pointed tops were also called “Holland” tops since Dutch people used this kind of lantern to signalize ships.

There were a few other styles characteristic of this decade:

The late victorian streetlights were also called luminaires. Most of these lamp lights were powered by electricity instead of gas. The lamp poles were ornamental (urns and garlands were common), or plain and utilitarian with simple ribbed designs.

The white glass polyethylene globes of the lamps created light rays that resembled the moonbeams. Most street lights in this period had twin lights on one pole. Meaning, that one streetlight had one metal lantern on each side of the pole.

Also, short mast arm streetlights were very common in this period. Even though electric lights were already in use, these short masts remained as decoration.

The lamp posts from this period featured Art Nouveau’s signature curling designs combined with classical designs. The most recognizable were the lyre tops. These lamps had lamp tops decorated with a harp or lyre on the caps The shade was hidden inside the lyre for protection.

The first quarter of the 20th century was a very creative period. In this decade a lot of new designs and styles were developed.

One of the most important changes was that twin post streetlamps were replaced with five bulb streetlamps. This was not only decorative, it was very useful, considering it add extra light and brightness to the urban areas and busy streets.

Art Nouveau was replaced with Art Deco so there were some significant changes in design. The lamp stands from this period had rose garlands molded as a decoration. This style is called Torchière-style.

The Spanish Revival style brought a significant change in design. This style promoted lamp posts made from metal and glass that hangs from the pole, instead of being mounted on the top. These iron lamps were very large in dimensions.

You might be surprised but these antique items are fairly pricey, mainly because they are rare items to poses (due to the size and purpose) and they aren’t in big demand.

However, some people still collect them for work-related reasons like decorators, filmmakers that use them as props, and for historical preservation. This is the main reason why it is so hard to make a proper price estimation since the final cost can vary a lot depending on:

Where To Find Antique Street Lights?

Honestly, finding an antique street light that is in good condition is a very difficult task. Most of these street lamps were upgraded to the ones we use today, or they were dismantled and used for crafting new ones.

But as I always recommend, try to look in your local antique shops or flea markets. I always get surprised with the vide variety of items you can find there. Maybe they don’t have a full vintage street light, but maybe they have a lamp post at least so you’ll only have to find the right pole.

Also, browse the auction web pages such as Etsy and eBay. In case, you are very eager to decorate your backyard with this kind of lightning you can always look for custom-made ones.

Companies like Niland will provide you with all the necessary parts you need to custom-build the antique street lamp post of your dreams.

People were always attracted by light and avoided dark and dim spaces. Even the first man invented fire not only to keep themselves warm and prepare food, but they also needed a source of light that will make them feel safe and sound.

Even today you’ll always choose to walk alone down the street that is crowded with street lights rather than the one that has fewer of them. Being able to see your surroundings makes you feel in control, and being in control is our natural urge.