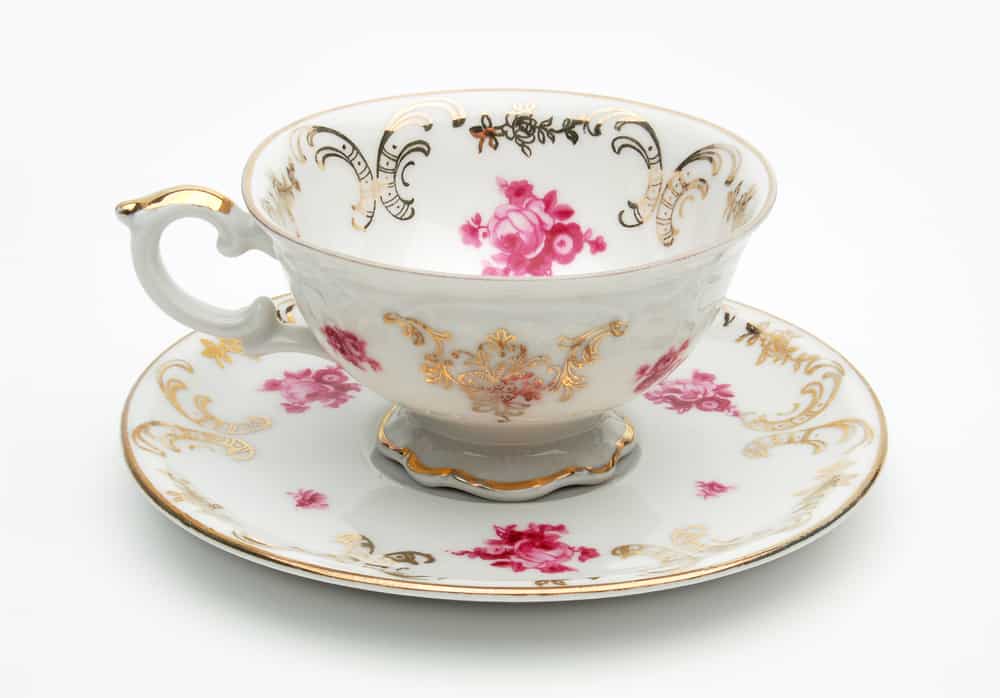 Most millennials grew up in households that had this nearly secret service consisting of porcelain teacups and saucers that were only brought out for special occasions. While antique teacups aren’t as popular as they used to be, it still has a strong community online.

Some people are antique collectors and buy old teacups to enhance their collectible collection, and others simply want to sip a tea out of a beautiful piece of art.

In this article, we’ll cover everything about antique teacups, from their history and popular brands, to what factors play in their value.

Teacups were already used in East Asia and specifically China in the 2nd century. They were way smaller than what we’re used to today and lacked handles, so you can think of first teacups as really small bowls that were used to sip tea and sometimes other beverages.

They were made from porcelain or other ceramics, and reached Europe just in the 17th century when some of the first trade routes were established with East Asian countries.

Prior to using teacups, people in Europe just used bowls for tea, but they were charmed by porcelain teacups that were designed for one purpose only. However, it didn’t take long for world-renowned German engineering to show itself up and “improve” on the teacup design.

In 1707, an alchemist Johann Friedrich Böttger added the handle on a teacup, and this new design trend spread through Europe like wildfire. Chinese teacup makers started specifically producing cups with handles to be imported to Europe.

That being covered, let’s take a look at some of the most renowned teacup brands in history.

There have been hundreds of companies that manufactured porcelain and bone china teacups which have survived the test of time and continued to be popular to this day. Some of the most renowned and fascinating brands are:

In 1897, the Paragon China Company was founded by a great-grandson of the founder of another famous bone china tableware manufacturer called Aynsley China. Paragon China quickly rose to the top of the teaware industry with its high-quality products.

In fact, this company was so good that it had multiple royal warrants of appointment, including from Queen Mary in 1933 and Queen Elizabeth in 1938. Despite that, it went out of business in 1960, when it couldn’t keep up with the competition.

Today, antique teacups made by Paragon China are sold for anywhere between $20 and $50, but some rarer cups are valued in the hundreds.

This company, or rather a type of porcelain was first produced in Europe by Johann Friedrich Böttger, the same guy who “invented” a teacup handle. In 1708, he cracked the secret to hard-paste porcelain that has been produced in China for centuries.

In 1710, he got funding and opened a factory, to become the first mass-producer of porcelain in Europe, adding his own artistic touch to the teacup designs. From 1720, Meissen porcelain teacups got marked with a logo of two crossed swords.

It was one of the first trademarks in history, and it worked out because Meissen exists to this day and is owned by the State of Saxony in Germany.

Founded in 1759, Wedgwood became one of the most famous china manufacturers in Europe. Their signature Jasperware and Black Basalt teaware are some of the most known china patterns out there, and this company is in business to this day.

It not only survived for over 250 years, but also flourished, and currently produces dozens of different collections of teaware, including teacups. However, antique Wedgwood items that are already discontinued are the most desired ones among teacup fanatics.

How Can You Tell If a Teacup Is Antique?

In the world of antique collectors, an item is considered “antique” if it’s at least 100 years old. There’s a really simple shortcut you can take if you want to quickly guess if a teacup is antique.

The vast majority of teacups that were made before the 19th century have handwritten marks at the bottom of their base. Embossments and stamps of logos and marks only started to appear in the mid-19th century, and even then not every teacup has it.

As a result, if your cup has some kind of handwriting on it, chances are it’s an old antique teacup. However, make sure to not mistake a coffee cup for a teacup. The former is less ornate and delicate, and most of the time worth much much less than the latter.

If you want a foolproof way of guaranteeing that a teacup is in fact an authentic antique, recommend you get help from a professional appraiser who can not only tell you if your teacup is antique but also estimate its potential value on the current market.

Are Old Teacups Worth Anything?

The vast majority of vintage and antique teacups are in the $10 to $50 range. However, some can be worth a lot of money. Like, a lot of money, we’re talking millions of dollars. That being said, it’s unlikely that you’re going to encounter such a teacup yourself.

Such a vast difference in the potential value of old teacups can be boggling, but there are 4 main factors influencing the price:

There’s a general rule of thumb you can apply to nearly all antiques. It’s “the older the item, the more likely it’s worth something”. No one is going to pay $500 for a teacup made in 2022.

However, someone not only would but does pay that for teacups that are really really old. Age is simply one of the most objective factors determining the value of an antique, and teacups aren’t an exception to that.

The less damage a teacup has, the more valuable it is. You would want to pay less for a damaged cup, regardless of whether you’re a collector who wants to own a piece of history or just a hobbyist who desires to drink from an antique cup.

An important detail to point out is that the first scratch, dent, or any sort of minimal damage that reduces a teacup’s condition from mint to excellent is going to reduce its price the most.

The following damage is also going to lower its value, but the step down from mint to excellent is really harsh to the value of all antiques, especially such as teacups.

It might seem obvious, but mentioning that rarity influences the value of antiques, including teacups, is always a good reminder. No one is paying a lot for mass-produced teacups that can be purchased at every Walmart store.

Finally, the most expensive teacups are those with a fascinating history and rich background. Maybe it belonged to an important historical figure, or it survived bombing during a war.

A connected storyline to a teacup makes it more than a mere teacup. It makes it a piece of significant history and inflates its price to astronomical levels, as we’re going to see now.

Just to show how many antique teacups can be worth, here are the top 3 most expensive teacups ever sold: While it’s not a single teacup, but rather an entire tea service consisting of six teacups and saucers, a teapot, and bowls for sugar and creamer, it’s still worth including.

This service was made specifically for Sultan Murad V, who’s infamous for having the shortest rule out of all Ottoman Empire sultans in history. He reigned for just 93 days, after which he was deposed.

2. A Set of Seven Russian Teacups and Saucers from the Raphael Service – $86,500 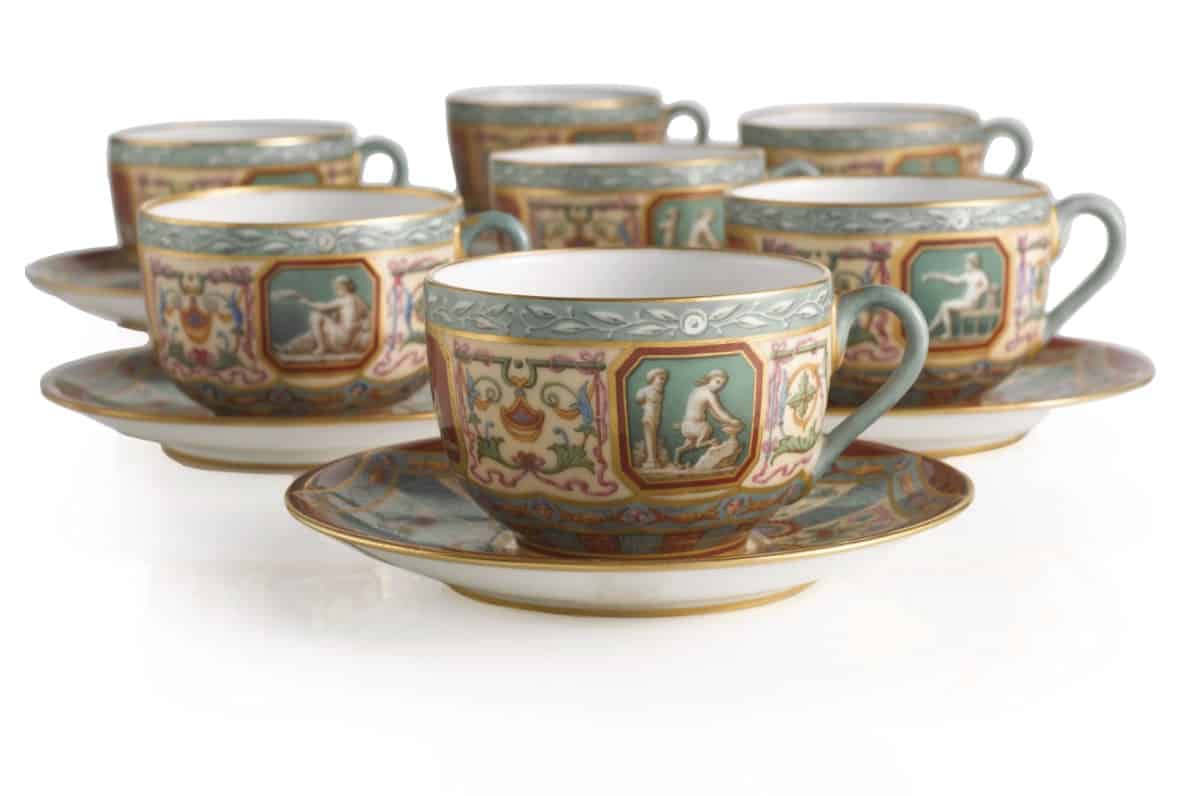 These 7 teacups were made during the reign of Nicholas II, the last emperor of Russia. Each cup comes with a matching saucer and is adorned with intricate neoclassical motifs. For the cherry on top, the cups have gilded rims and feet.

The extreme craftsmanship that was required to make these cups combined with the historical background made this service sell for $86,500 in 2019. While it’s technically not a teacup, the Meiyintang “chicken cup” is the most expensive cup ever sold. It was auctioned off by Sotheby’s Hong Kong in 2014 for a final bid of over $36 million!

There are 16 such cups known to exist, and they were made in the 15th century. Despite being over 500 years old, it’s safe to say that these cups are the finest works of porcelain ever produced.

The cups feature paintings of chickens, hens, and roosters that are filled with enamel pigments. Such a complex technique wasn’t replicated in the West for hundreds of years after these cups were made.