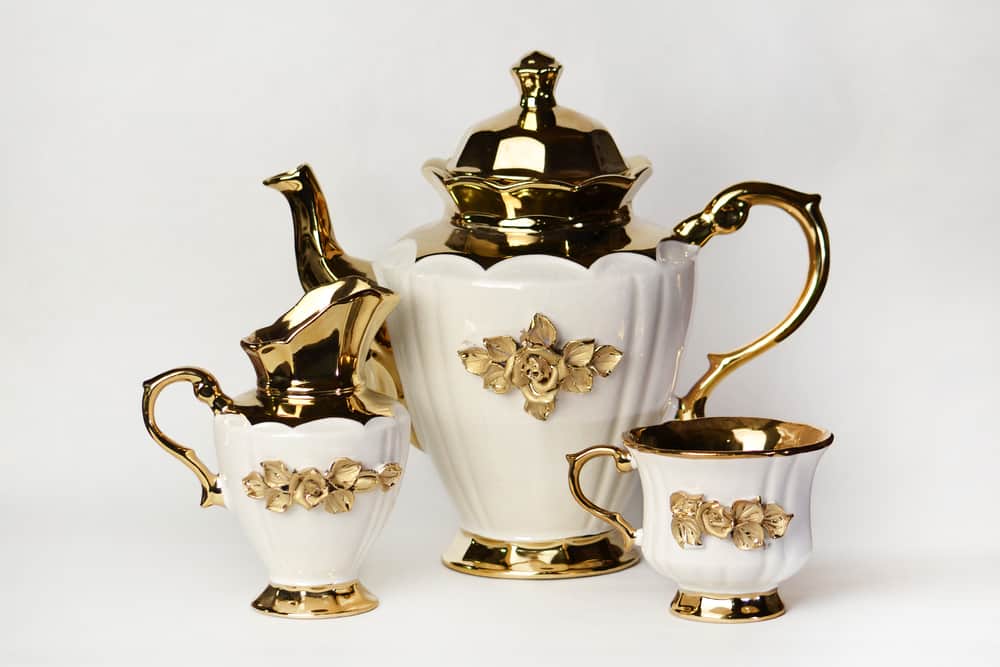 You may not have even considered it, but you may have a hidden treasure in your closet. That old teapot and tea set you inherited from grandma could be worth a fortune and you have no idea.

That is why we want to provide you with the most comprehensive guide to antique teapots. Wouldn’t you like to use that kettle that you’ve never used and is just taking up space in a corner of your house?

Perhaps you’d like to learn more about the fascinating world of teapots. And I say fascinating because it is one of the objects that has mutated the most throughout history and has been present in all cultures.

Prepare to enter the fascinating world of antique teapots and learn how to put your own to good use.

It would be unfair to discuss teapot history without also discussing tea history. Because one cannot exist without the other.

Tea, like oil and wine, has a long and glorious history in human gastronomy. Tea, on the other hand, stands out from the other two since it is, after water, the most consumed beverage on the earth.

Its earliest history can be traced back to Chinese culture. According to mythology, the ancient Chinese emperor Shen Nung discovered tea leaves infusion by accident about 4,900 years ago.

The breeze rustled the tree’s branches as he sat under it, and some leaves fell into the container that Shen Nung used to boil water, resulting in the legendary brew.

Great was his surprise when he realized that the resulting infusion turned out to be very refreshing and restorative. And that’s how tea was born.

There were no teapots in the early days of Chinese tea history, so people had to make it in bowls.

It was originally intended exclusively for the Emperor, then it became part of the monks and nobility’s use, and it wasn’t until just a few hundred years ago that it became popular among the common people and spread throughout the world.

The tea leaves were put into the boiling water in any bowl, which was then poured into a bowl of rice. It didn’t take long for artisans to perfect the art of manufacturing teapots for this magical beverage.

Teapots became more complex over time, and by the end of the Ming Dynasty (1368-1644 AD), master artisans were manufacturing beautiful, heat-resistant teapots of unrivaled beauty.

Archaeological investigations in Yixing have revealed that potters began creating teapots from a native clay called “zisha” as early as the 10th century, during the Song dynasty.

The manufactured utensils were said to be of high quality, and the aristocracy of the time began to purchase them. This is how Yixing teapots gained popularity and spread over the empire.

This is significant because Emperor Kang Xi, who was born in the middle of the 17th century, ordered Yixing teapots and tea to be exported to Europe.

Yixing teapots were the pioneers of the first generation of European teapots and they have been the basis of the teapots we know today.

The odors of the tea remain impregnated and give the drink a superb flavor thanks to the porosity of the clay from which it is produced, however, it is recommended that a single teapot be used for a single type of tea.

It is also suggested that you rinse only with water and not with any detergent.

Other Teapots Around The World

The trade routes connecting East and West allowed for the exchange of an infinite number of products. This is how tea became popular around the world, and teapots were an inseparable companion.

Each region developed its tea customs and tastes. Simultaneously, they began producing various types of teapots made up of different materials.

In 1638, tea was introduced to Russia under the name “Chinese herb.” The Mongol khans received it as a gift from a Chinese ambassador.

The drink was a success in the court of Tsar Michael I of Russia in 1679.

Later, the Russians signed a contract so that the court would have a supply of tea from China.

The Mongols introduced tea to Russia, yet the Russians had been using the samovar long before the Mongols arrived. Given the harsh cold of the steppes, they produced a traditional infusion in a “samovar” using fermented honey and water.

The etymology of the word “samovar” is “pot to cook oneself.” As a result, the Russians quickly elevated tea to the level of a Mongol, Chinese, or Japanese rite.

Tea has been known in the Islamic world since the Middle Ages in Central Asia, courtesy of the Silk Road.

However, trade between China, Central Asia, and the Persian Safavid Empire brought it to the Middle East in the 17th century.

Tea is brought to the Middle East by Persian, Indian, and European traders, and then to the remainder of the Ottoman Empire by the Turks.

It came to the Maghreb at the beginning of the 18th century, where a local modification of the teapot, the famed Moroccan teapot, arose. It’s a hybrid of Chinese and European designs.

We’ve already discussed China and its famous Yixing teapots, but as the birthplace of teapots, that’s not its only contribution to the world.

During the Ming dynasty (1368-1644), both the cooking method and the shape of teapots evolved to look like the ones we have today.

Ming porcelain became popular around this time. It is made of white clay and glass and comes in two styles: compact, high-temperature fired, and thick. The colors are grey, cream, or red. And porous, white, or brick red when fired at a low temperature.

During the Qing Dynasty (1644-1912), a new method of making and producing tea was established through fermentation and drying. Yixing earthenware and porcelain teapots were produced on a large scale as a result of the product’s widespread acceptance abroad.

After the first oriental teapots were introduced to the UK via China in the 18th century, English teapots began to be created.

From 1765, the first English teapots mimicking Chinese teapots were made in English porcelain in Stoke-on-Trent, eventually becoming authentic and luxurious pieces of art.

Tea drinking became a symbol of English identity and tradition, attaining peak appeal among the upper classes in Victorian England at 5 p.m.

Since the eighteenth century, there have been refined silver teapots that have been passed down from father to son and are highly sought after by collectors.

Now that we have a better understanding of the different types of teapots that can be found around the world, let’s move on to the most intriguing part: identifying them and determining whether or not they are valuable.

Although a manufacturer’s stamp isn’t found on every kettle, the majority of them do. This can help you recognize them.

Remember that the teapots became works of art in many cases, and like any good artist, they will want to leave a mark indicating that it was their creation.

When you come across an interesting teapot, turn it over and check for a stamp or mark on the bottom. This will not only tell you what year it was made but also how much it is worth and whether or not it is genuine.

There are publications and websites devoted specifically to offering thorough information on valuable teapots.

To figure out where and when they were made, the design and shape are crucial. Around the 18th century, the style became more rounded in the West, while it became flatter and circular in the East.

Modernity brought with it a multitude of style and form choices throughout the twentieth century. The avant-garde design was popular during the time.

What teapots are worth money?

Examining the holes in the pump is one of the best ways to determine if your antique teapots are worth money. It’s an antique kettle if it has three or four holes. The shape of the perforations should also be taken into consideration.

Because the first teapots were handcrafted, the holes will not be exactly round, but a perfectly round hole implies that they were mass-produced.

Collectors prize teapots with distinctive and original designs and those with such designs can fetch a high price. They were also produced in small batches rather than in large volumes.

Remember that the world of teapots is extensive, so you should always educate yourself and conduct research before purchasing or selling one.

How to Determine the Value of an Antique Teapot?

There are five factors that will determine whether your antique teapot is worth money. rareness, artistic taste, appeal, legitimacy, and well preserved.

For an item to be considered rare, only a few identical pieces must have been produced. Another possibility is that there are only a few pieces left from the same collection. For example, old piggy banks had to be broken to get the money out. As a result, they are nearly non-existent.

Another factor that determines whether an object is rare is its design or color. You can also consider its size and shape. The odder the object, the better. It could even have a manufacturing flaw, making it even more valuable.

When an object’s overall appearance is pleasing to the eye and all of its elements are in harmony, it has aesthetics.

What is popular in the current market determines how desirable an item is. Something made a long time ago may not have gotten much attention at the time, but 50 years later it experiences a boom and becomes fashionable. It is there when an old object becomes desirable.

Technology has advanced significantly over the last century, and we can now replicate objects of all kinds, so it is critical to have clear criteria for identifying something with the right authenticity.

Check if it is really old. On the object, look for a company stamp or the artist’s signature. Finally, make sure it is the material it claims to be.

In a perfect scenario, the antique you want to buy or sell would be in the same condition in which it was created years ago. However, the march of time has most likely left its mark. The less damage there is, the better. Try always to find teapots in great condition.

What is the most expensive teapot in the world? The Egoist was named the “World’s Most Valuable Teapot” by Guinness World Records in 2016, with a value of $3 million.

Search quickly if we already solved your question.

Where Can I Find Antique Teapots?

Today, the Internet is one of the best places to find antique teapots. Globalization enables us to communicate with people from all over the world and choose the best option for us. The following are some of the best online resources:

What can I do with my old teapot?

Can You Drink Out of Vintage Teapots?

They are safe as long as the enamel is not cracked. Some of the materials used to paint or enamel them contain lead oxide or radioactive oxides, owing to the lack of scientific knowledge in ancient times.

Before using your old tea utensils, it is recommended that you test them.

Can you pour boiling water into bone china?

Fine bone china should never be exposed to high levels of temperature changes or to an open flame. Pouring boiling water into a cold piece of fine bone china is never a good idea.

In any case, it should be a secure system. It would be preferable if you first thoroughly cleaned it without using abrasives or acidic cleaners. Because tea can leach a lot of metals, the lead testing kit could be a good place to start.