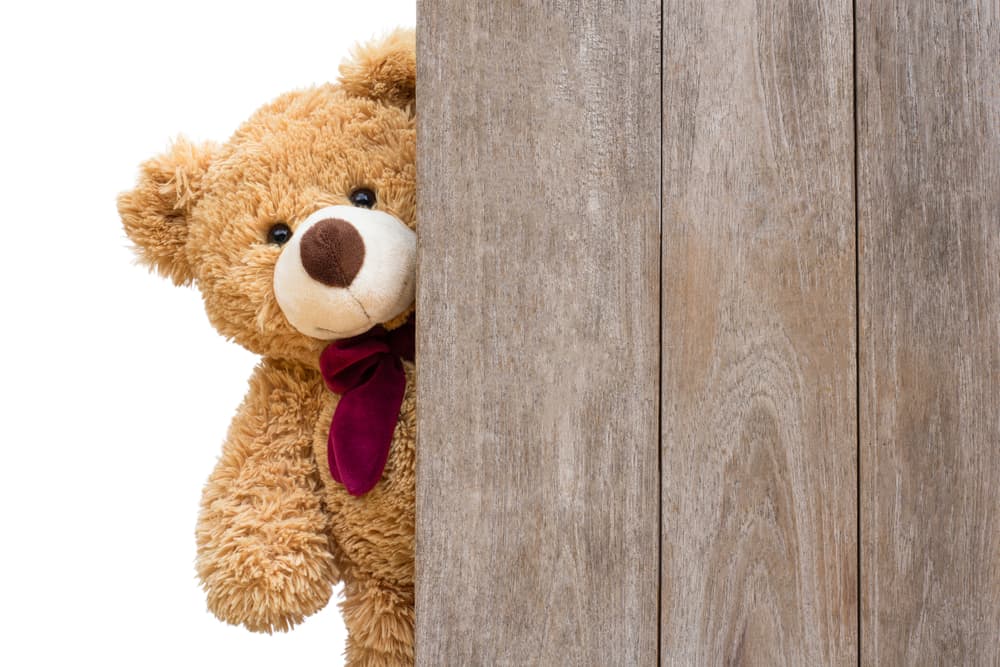 Many antique toys and dolls have turned into valuable collectibles. However, no such item is as universally beloved as the teddy bear. Since its creation in the early 20th century, dozens of companies all around the world have designed their own models that have become antiques today.

If you’re interested in learning about different types of teddy bears, how to recognize authentic teddies, and where to get them appraised, this article is just for you.

The name “teddy” bear originates from a story about Theodore Roosevelt, the 26 President of the United States. Allegedly, during one of his 1902 hunting trips in Mississippi, he spared a wild bear by not shooting it. This story made the newspapers and cartoonist Clifford K. Berryman drew a cartoon of the scene.

It got published in The Washington Post and became the talk of the country for months to come. A businessman Morris Michtom read the paper and saw the cartoon, which inspired him to create a soft bear toy, that he called “Teddy bear”, and the rest is history.

Antique teddy bears are usually sorted by the country they were made in. While you can categorize them by structure (jointed/non-jointed), age, color, material, and so on, using the country of origin and manufacturers that produced them is the most useful.

It includes some of the first teddy bears ever made. There were many different models of American teddy bears, but they can be recognized from other types of teddies by these general characteristics:

North America had the most manufacturers producing teddy bears, but some of the most famous and important are:

Founded by Morris Michtom, this is the company that is recognized for inventing the teddy bear. The appearance of its first teddy bear is said to be inspired by the President himself, and had these characteristics:

The first bears didn’t have any labels because Ideal Novelty and Toy Co. hadn’t trademarked the toy yet. However, later bears of the same model came with a circus wagon-shaped label, and after that with a more usual label saying “Ideal”.

The first teddy bear was an instant hit, and it led to the creation of the second model. It was named “Mrs. Robinson bear” and had these characteristics:

Bruin Manufacturing Co. (From 1907 to Unknown)

This company was among the first in the U.S. to start manufacturing teddy bears. One of their models was called “Blissful”, and had archetypical American teddy bear characteristics:

This company was founded by Adolph Gund, who was an immigrant from Germany. At first, the company manufactured toys and necklaces but started producing teddy bears in 1906.

Sadly, the very first Gund models that would be antiques today aren’t documented, and all we know is that most likely, they had a label saying “Gund Creation”

This company was founded in New York, in 1901. 5 years later, it jumped on the teddy bear crazy and started making its own models. However, Aetna Toy Animal Co. manufactured teddy bears for a very limited time, just 9 years, making its teddies very valuable today.

One of the most known models was called “Still Hope”, and had these features:

While American Ideal Novelty and Toy Co. is said to have invented the teddy bear, German toy makers were making soft bear toys as early as the 19th century. They were characterized by realistic teeth, claws, a long muzzle, and a hump on the back.

However, the first German toys that were marketed as “teddy bears” appeared in 1908, and since then German bears slowly started becoming more similar to American teddies during the first half of the 20th century.

Several German companies manufactured teddy bears that are some of the finest teddy bear models you can find:

Arguably the most famous toy bear brand in the entire world was founded in 1880 by seamstress Margarete Steiff. Her company made all sorts of plush toys, but it all changed when Margarete’s nephew Richard designed a bear toy with movable limbs.

Margarete wasn’t a fan of the idea, but the company started manufacturing the bear toy called “55PB” in 1903. It had these features:

Founded in 1863, this company manufactured kitchenware and tin wind-up toys, but entered the teddy bear niche in 1905, when it ripped off Steiff’s “55PB” bear pattern and started producing such teddies under its own brand.

Obviously, Steiff didn’t allow its competitor to just use its design and sued them, which led to Gebrüder Bing designing its own teddy bear model in 1909. It was very reminiscent of American teddies with these characteristics:

Another country that was among the first to produce its own teddy bears was the United Kingdom. The first models were very similar to early German bear toys, having realistic features that weren’t reminiscent of American teddies.

Founded in London, this company was producing small articles from textile until 1906, when it designed the first teddy bear in the U.K. Unfortunately, the company didn’t label its bears until the 1930s, so the first models aren’t documented.

Most importantly, a J. K. Farnell teddy bear was gifted to Christopher Robin, the son of Alan Alexander Milne, who went on to publish Winnie the Pooh in 1926, after being inspired by his son’s bear toy.

This company first made DIY toy kits of printed cut-out cloths but started manufacturing teddy bears in 1915. During nearly a century in the business, it manufactured many different teddy bear models.

The first ones made were called “Kuddlemee” and had these characteristics:

How Can You Tell If a Teddy Bear Is Antique?

Antiques are considered items that are at least 100 years old, meaning antique teddy bears are those, that were made in or before 1922. However, if you’re a novice collector, chances are you’d be easily tricked by a high-quality fake.

Here are some useful tips and tricks for telling if a teddy is an authentic antique:

How To Value an Antique Teddy Bear?

Just like evaluating any antique item, evaluating antique teddy bears require knowledge and skill. But there are several key things influencing the price that you should keep an eye out for:

Just like with most antiques, age is one of the most influencing factors when evaluating the item. The general trend is that the older the teddy, the more valuable it’s going to be. That’s why teddy bears made in the 1910s are the most expensive.

Once again, there’s a rule of thumb that can be applied to all antiques, including antique teddy bears; the better the condition of an item, the more valuable it is.

Some teddy bear manufacturers are more respected than others, and it impacts the value of a teddy bear. Usually, the most prized German teddies were made by Steiff, and American by Ideal Novelty and Toy Co.

If an antique teddy bear comes with all its labels and tags, its value is several-fold bigger compared to a teddy that doesn’t have original branding.

However, even knowing these factors, it’s difficult to evaluate an antique teddy bear if you have no prior experience in the field. That’s why we recommend you reach out to expert appraisers.

If you have a teddy bear lying around your home and suspect that it’s a rare antique, you should get it appraised. A professional appraisal will tell you everything you need to know about your toy and estimate its value. Some of the best online appraisal services are:

The best part about Christie’s is that it offers free appraisals, giving auction estimate value. If your teddy will appear valuable, you can put it on Christie’s auction online right away.

Lori Ann Verderame has a Ph. D in art, and is one of the most well-known appraisers in the U.S, being featured on various TV programs, including History Channel and ABC News. Her over 2-decade-long experience in antiques allows her to perfectly appraise most items, including teddy bears.

While it costs $59 to get a single item appraised, you’ll get every piece of information about your teddy bear that’s available, including sale records of similar teddies that were sold in the past.

This appraisal service was founded in Copenhagen, Denmark, in 2015 by Mads Hallas Bjerg and Johan Laidlaw. They combined ever-improving imaging technology with expert knowledge and launched Mearto, a service that can appraise most antique items, including teddy bears, in just 24 to 48 hours!

How To Restore Antique Teddy Bears?

If you don’t have experience in restoring antiques, we advise against attempting to restore your antique teddy bear. If it’s worth a lot of money, chances are you’re going to depreciate its value by ruining it during the restoration process.

Instead of doing it yourself, you should reach out to antique toy restorers, who will safely return your teddy bear to pristine condition. However, if your antique teddy bear isn’t worth a lot, you can try restoring it yourself. Here are general guidelines for how to do it:

We recommend using baby shampoo or a mild cleaner. Pour some in a bowl of warm (not hot) water and make it foam.

2. Apply The Foam To The Teddy Bear

Then, take a soft toothbrush or a clean cloth and start applying the mixture to your teddy bear. Avoid getting your teddy too wet, as some antique teddy bears contain wood wool, which can rot if becomes too damp.

3. Wipe The Foam Off The Teddy Bear

Take a dry cloth and wipe off the foam, trying to get the dirt out of the teddy bear. Avoid applying too much force, and rather repeat the same process as many times as required, instead of trying to scrub the dirt off your antique.

As you’re done cleaning the teddy bear, pat it down with a dry towel. Try to get as much moisture out of it without using much force. Then, leave it in a dry room-temperature area and let it dry for at least 24 hours.

Here are some of the common mistakes and things that you shouldn’t do when restoring your teddy bear: