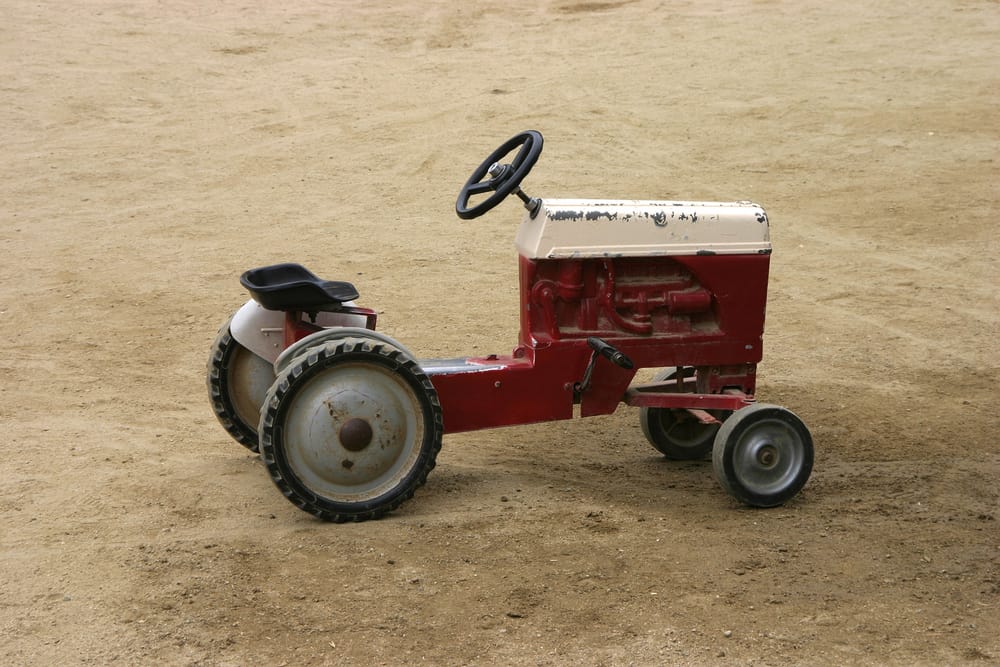 Many old toys have become sought-after antiques by collectors all over the world. Toy tractors aren’t an exception and are becoming more and more popular in the circles of antique collectors.

This article will cover everything you need to know about old toy tractors, from some of the most prominent manufacturers, to what influences their price and how you should go about selling your own.

Before we begin, it’s important to point out that toy tractors weren’t made by the same companies that made the tractors themselves. Toy manufacturers produced toy tractors of several tractor brands all at once.

However, knowing the manufacturers behind the real tractors that inspired the toys is also important. Because of that, we’re also going to mention some of the most influential tractor brands, but let’s begin with toy manufacturers:

It was founded on October 20, 1885, and a cork puller was its first product. Sometime in the next 5 years, Arcade manufactures its first toy which was a miniature coffee mill, but the company continues to focus on manufacturing various steel items.

Over the next few decades, Arcade slowly expands its toy line, but it only brings in 5% of the revenue before 1921. However, it all changed in the 1920s, when Arcade started producing toy tractors.

This company quickly came to dominate the newfound market and manufactured toys based on tractors made by some of the biggest brands, like:

You could say that Arcade is the most important company in toy tractor history, and it reflects in the value of their toys today.

Founded in 1894, Hubley produced a wide selection of cast-iron toys, focusing on vehicles like cars and tractors. By the 1960s, this company had become the biggest cast-iron toy manufacturer in the world.

It was founded in 1945, and despite being late to the toy tractor boom, this company is producing John Deere, Case IH, and New Holland toy tractors to this day. Their vintage toys are some of the most sought-after to this day.

There were many more toy tractor manufacturers, but now let’s take a look at the tractor brands that most sought-after toys are based on:

Allis-Chalmers was founded in 1901 and became one of the biggest farm equipment manufacturers in the U.S. Most of their toy tractors were produced by Ertl.

This is one of the most iconic names in agriculture, and its toy tractors are some of the most prized toy antiques. John Deere produced a wide variety of tractor models over the years, so there are many different toys you can choose from.

It was founded in 1905 and was one of the biggest names in the agriculture business for over 8 decades until it went defunct in 1985. However, toy tractors with their brand were very popular, and many of their models are still sought after by collectors.

This is a brand name for tractors manufactured by Ford Motor Company. Fordson toy tractors were made by several toy manufacturers, and include some of the most expensive antiques in this niche.

At What Age Is a Toy Tractor Considered Antique?

Most collectors agree that an antique is an item that is at least 100 years old. Because most toy tractors were made after the 1930s, there are not many existing examples of toy tractors that are actual antiques.

However, there are plenty of vintage toy tractors. Vintage is generally agreed to be an item that’s at least 40 years old. For the sake of simplicity, we’re going to use “antique” and “vintage” interchangeably for the remainder of this article.

Are Antique Toy Tractors Worth Anything?

Most old toy tractors are valuable antiques. Many toy collectors are seeking old models and are willing to pay up to 4 or even 5 figures for an extremely rare tractor. However, most vintage toy tractors fall somewhere in the $50-$150 range.

Before showing examples of recently sold vintage tractors, let’s see what factors are influencing the price of a toy tractor:

As with most antiques, the older the item, the more likely it’s going to be valuable. The earliest toy tractors are difficult to find and it results in demand that is bigger than supply, increasing the price.

Some of the most valuable toy tractors are those made in the 1920s and 1930s, and the price of vintage toy tractors decrease gradually with their age.

Toy tractors are collectible antiques, and the value of such antiques is heavily determined by their condition. It’s also worth pointing out that the value plummets when the condition goes from mint (perfect) to excellent.

Even a single scratch is enough for a toy tractor to not be graded mint. The subsequent damage also lowers its value, but not as drastically as going from mint to a lower grade.

Naturally, rarity also influences the value of a toy tractor. Some special edition tractors were made in incredibly limited numbers, so they’re extremely rare and difficult to find.

Bidders are willing to bid much more than they should for very rare items because there are cases where it’s unknown whether such toy tractor will ever be put on an auction ever again.

Now we can take a look at some recent examples of vintage toy tractors being sold and see how much they were worth: 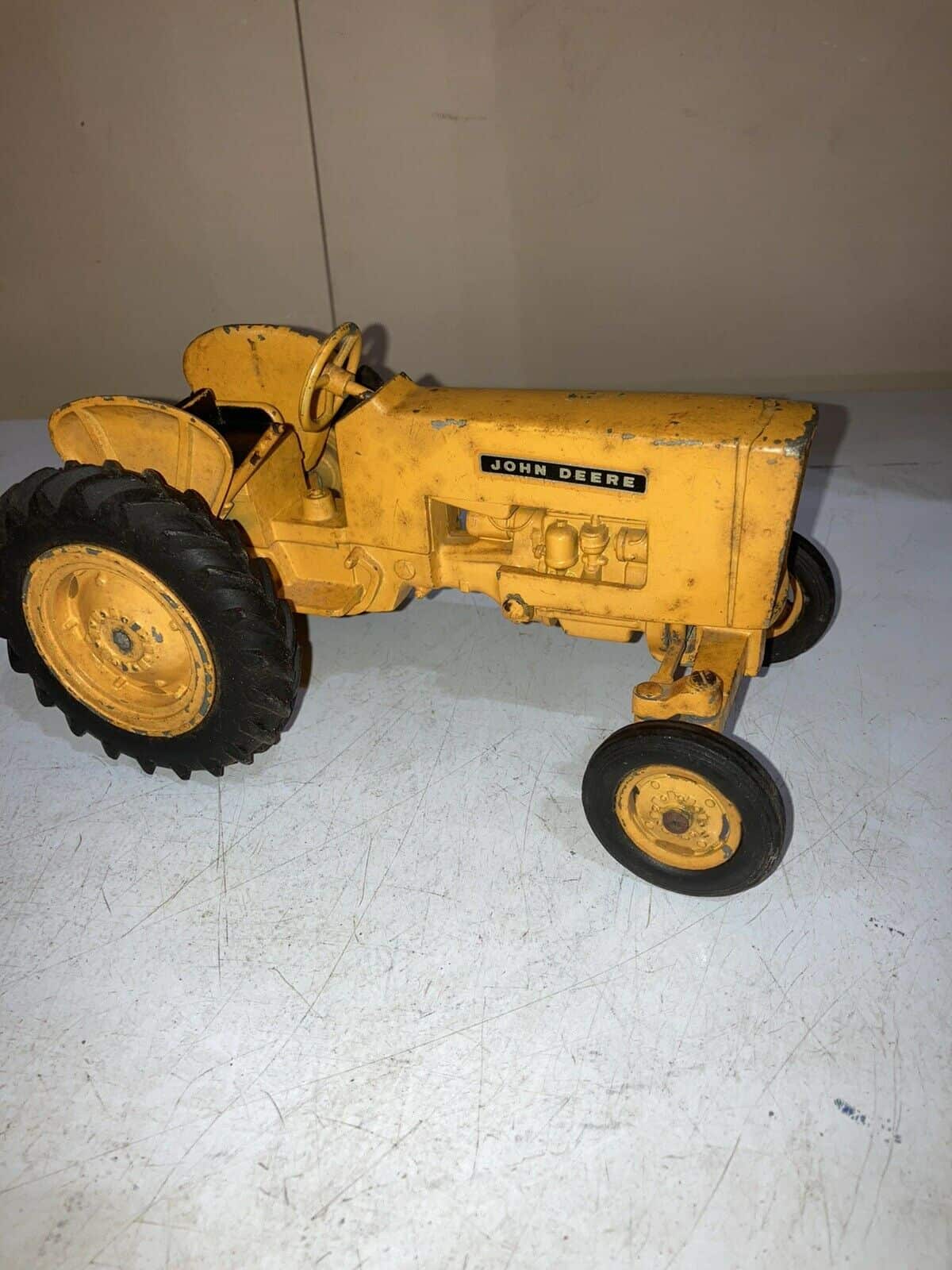 This 1/16 scale, 8.5-inch long metal tractor by Ertl sold for almost $400 in June 2022. Its condition is nowhere near mind or even excellent but it was sold for that much because it’s a rare model made almost entirely of metal. 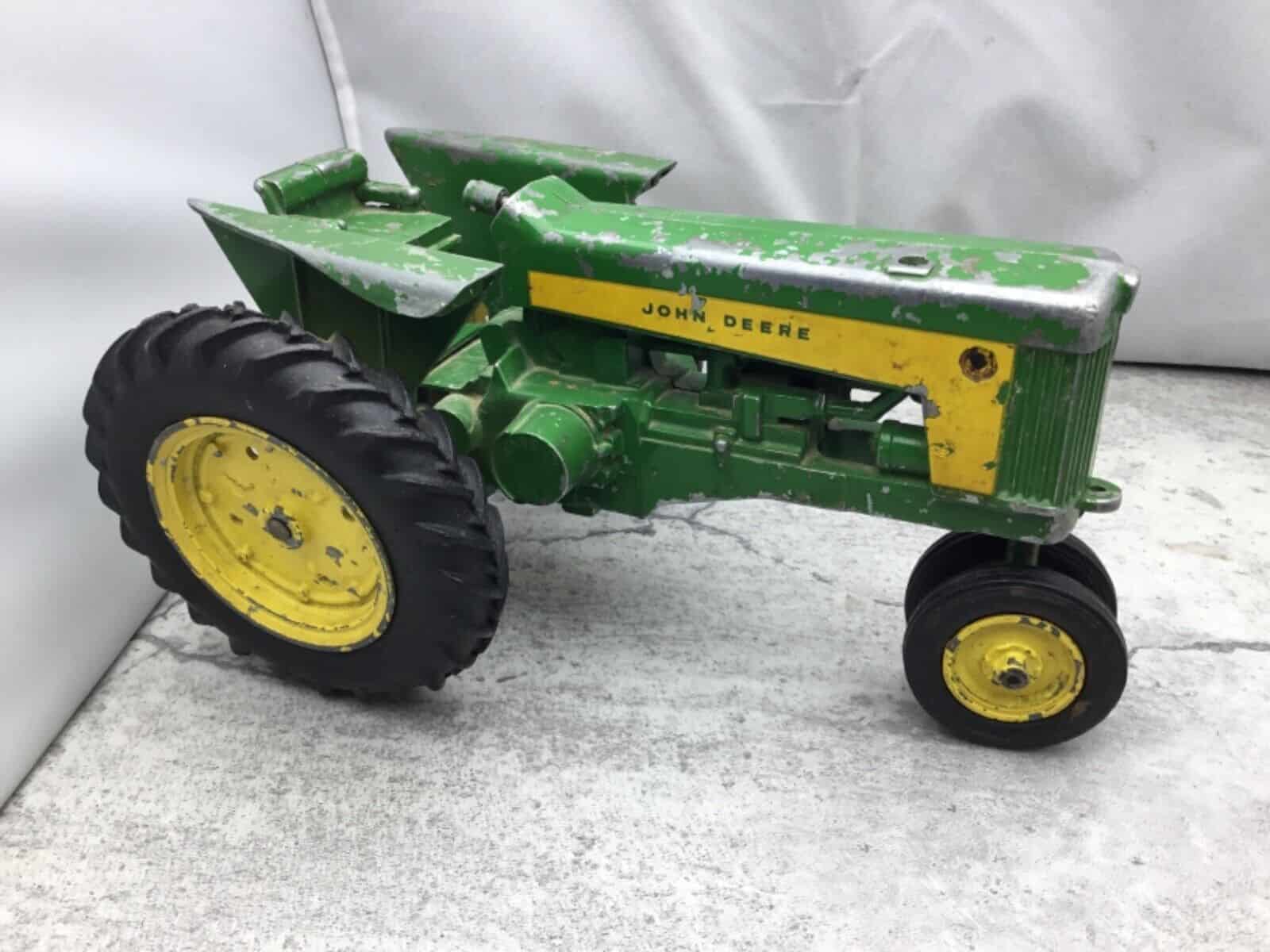 John Deere toy tractor made by Ertl. This one is a great example that you can get even relatively old toy tractors made by famous brands for an affordable price. It was sold for $95 in 2022, and according to the seller, it was made in 1959. 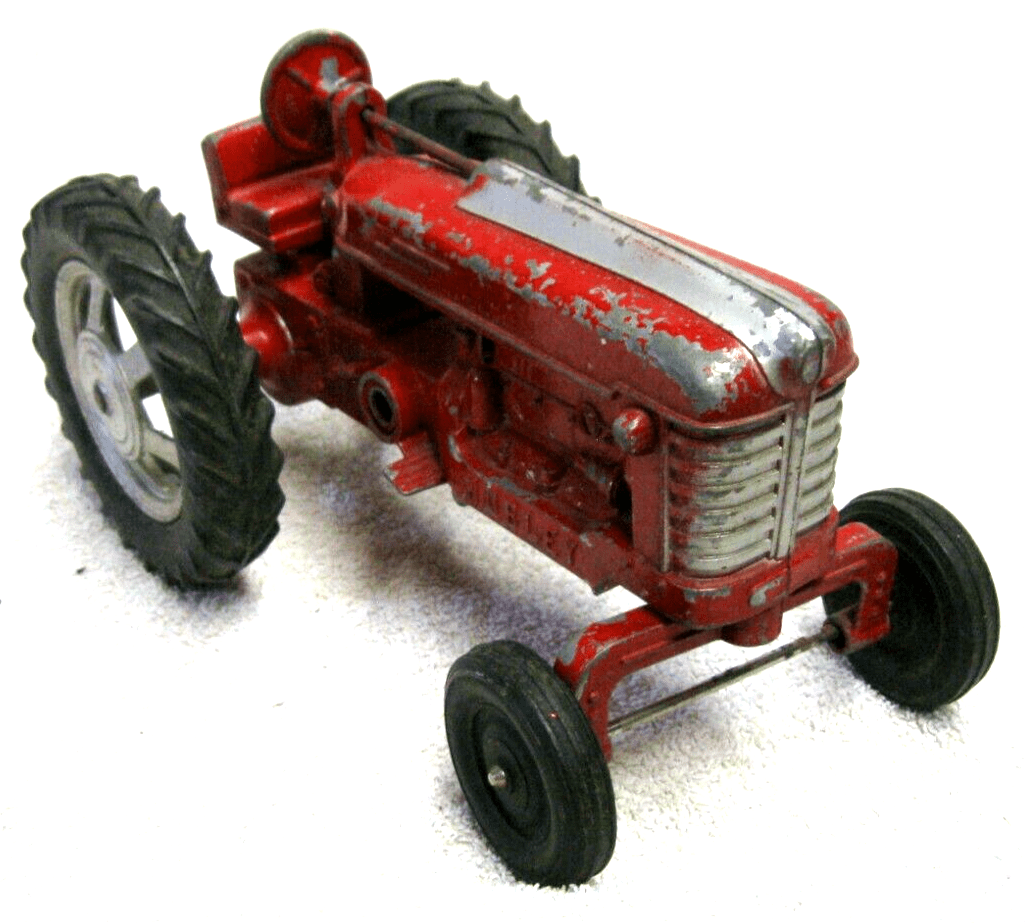 While this toy tractor was manufactured in the 1950s, it sold for just $15 in 2022. It’s because it was a simple farm toy tractor and not a replica of an actual tractor.

You can always find similar vintage tractors for much cheaper than their branded counterparts.

This toy tractor made of aluminum was sold in 2015. It was in excellent – near mint condition and came in its original box, which definitely played a part in such a steep price. Scale Models is a sister company of Ertl, and its founder Joseph Ertl has been introduced to the National Farm Toy Hall of Fame for his impact on the industry. 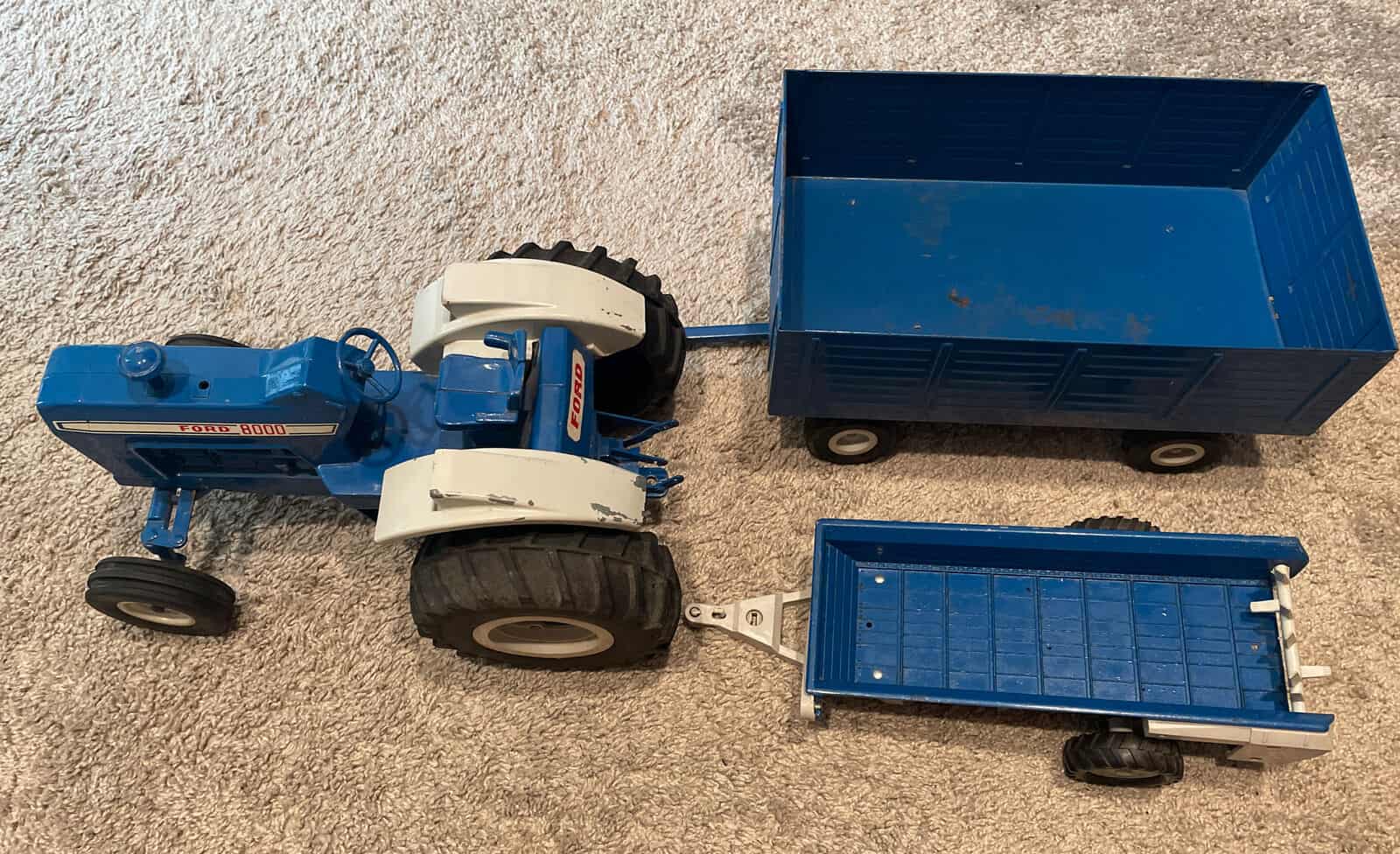 This 1/12 scale toy tractor came with 2 wagons and sold for $100 in 2022. The condition was good, but one of the wagons was missing a piece, which reduced its total price.

This is one of the first toys made by Arcade, as it was manufactured in the 1930s. It came in the original box that was damaged, but the toy itself was in a very good-excellent condition which earned it the final bid of $2,000 in 2021.

As you could see from these examples, the price of vintage toy tractors can range vastly. You could get a 70-year-old toy tractor for under $20, or pay over $4,000 for a toy that was made in the last 40 years.

How Do I Sell My Antique Toy Tractor?

If you have an antique toy tractor that you would like to sell, there are a few things that you need to do in order to guarantee that you get the best possible price for it and actually manage to sell it:

Before selling a collectible antique like a toy tractor, you must prepare it for being sold. You need to make sure that the tractor is in good condition, so inspect it for rust, scrapped-off paint, or other types of damage.

You can fix most of the damage, but keep in mind that it can take a lot of time and you might be better off just selling it as it is instead of investing time and money into improving its condition.

Then, you need to do some research to find out what similar tractors have sold for in the past. This will give you an idea of what your tractor is worth and how much you should expect to get for it.

Finally, you have to find someone willing to buy your antique toy tractor. Once again, we recommend eBay where you can put a listing for free, but other sites like Etsy are also worth considering.

Another option is to sell your tractor at a local antique store or flea market. This can be a great way to meet potential buyers in person, who can inspect your tractor on the spot and pay you instantly, saving on shipping costs.