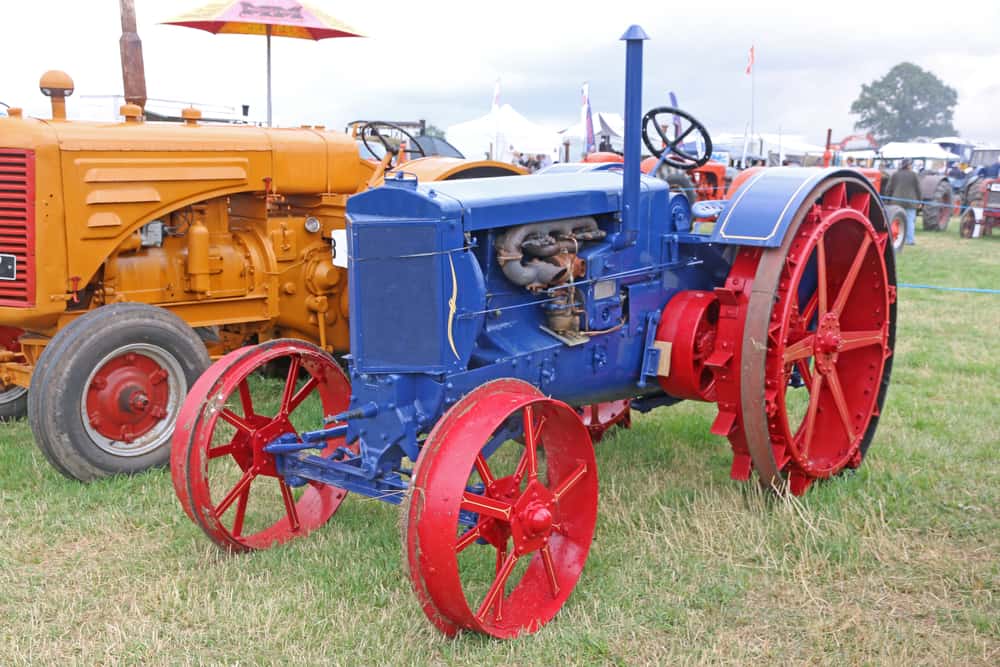 Your usual antiques, like vases, paintings, and collectibles make sense, as they aren’t supposed to be used, but to be preserved. They appreciate in value with time and can become a great investment.

The same cannot be said about antique tractors, but more and more people are looking into buying an older tractor in recent years. It’s most likely because vintage tractors can evoke nostalgia in farmers.

Most of them grew up on farms, and their parents used tractors that today can be considered “antique”. The love of farmers for farming originated specifically with tractors like that, and that’s why they’re seeking to buy such machines today.

There are dozens of antique tractor manufacturers, some of them manufacturing the farming vehicles to this day. However, some of the most known and influential were:

Allis-Chalmers was a company founded in Milwaukee, Wisconsin, in 1901 by Edward P. Allis and Frank W. Chalmers. However, the first Allis-Chalmers tractor was produced in 1918. It was the Model-6-12, which was discontinued in 1923.

Allis-Chalmers became known for its orange tractors, but the business took a hit in the 1980s and stopped producing its own tractors.

This company was founded in 1860 but started manufacturing tractors in 1939 with its debut model VAK1. David Brown became one of the biggest English tractor manufacturers but stopped producing them in 1988.

International Harvester company manufactured tractors under the brand name Farmall, which introduced what most call the first row-crop tractor. Later it expanded to standard, industrial, utility, and some niche models of tractors.

Ford Motor Company needs no introduction. It started manufacturing tractors in 1907 and called them “automobile plow”. Soon enough, Ford came to dominate this industry and today it sells tractors for about $1.3 billion each year.

Tractors of this brand are manufactured by Deere & Company, which was founded back in 1837 by John Deere. However, it started manufacturing its own tractors just in 1927, when it launched the John Deere No. 2.

Today, Deere & Company is one of the biggest agricultural machinery manufacturers in the world and is one of the largest corporations in the U.S. It produces tractors to this day.

Are Antique Tractors Worth Anything?

As antique tractors aren’t your ordinary antique, it’s difficult to give a clean and straight-to-the-point value guide. In general, you could expect to pay low 5-figures for a high-quality, working tractor made in the second half of the 20th century.

Because we can’t cover every single model ever made, the best we can do is explain what factors influence the price and review the value ranges of some of the most popular antique tractors.

Here are the main factors influencing the price of an antique tractor:

A rule of thumb that applies to nearly all antiques; the rarer and older the tractor, the more valuable it’s going to be. It’s because no one is going to pay a lot of money for a tractor that you can find everywhere.

On the other hand, many people are willing to empty their pockets for some rare tractor that is difficult to find. Rarity is closely related to age because the rarest tractors are likely to be the oldest.

Another rule of thumb; the better the condition, the higher the price. However, even a slightly damaged tractor that is rare and fully functional can still sell for a lot of money.

Additionally, for most antiques, the most devaluing step is going from mint to excellent condition. However, tractors don’t suffer that much from a few scratches and mint condition isn’t valued that highly.

It’s because most people buy antique tractors to use in the fields, instead of gazing at them locked behind glass doors.

Now we can take a look at some of the most sought-after antique tractors and how much they’re worth:

This model was made from 1933 to 1948 and was a great budget option geared with pneumatic rubber tires that weren’t that popular back in the day.

Model D was produced from 1923 to 1953 and is known for its quality and durability, but also for its iconic green frame and yellow wheels. It’s one of the most popular antique tractors, and their price usually ranges from $3,000 to $10,000.

As with all tractors, the exact price depends on condition, functionality, and the year it was made. For example, this one from 1935 sold for $7,000 on an eBay auction in 2022.

It was so this one was one of the oldest tractors of its model and was in excellent condition, which explains why it received such a high bid.

It was engineered by a British mechanic Harry Ferguson, and the first units hit the market in the summer of 1947. It had a 4-speed gear and a top-notch hydraulic system, making it a powerful machine that was smooth to ride.

It became one of the most popular tractors of all time, and today its price varies wildly. The price of Ford 8N tractors in working order starts from about $2,500, but most fall at the $5,000 mark.

However, the oldest Ford 8Ns that are still in excellent condition can be sold for as much as $15,000 or even more.

This tractor was made by the International Harvester Company from 1939 to 1954. During this span, nearly 400,000 such machines were made, but many didn’t survive to this day, and even less survived in excellent condition.

However, those Farmall Model H tractors that were maintained properly and are as new, are valued at about $15,000, especially if it was manufactured in the early 1940s.

That being said, Model Hs that were produced in the 1950s and have defects can be bought for $2,000 or even less.

How to Sell and Buy Antique Tractors?

It’s always best to buy antique machinery in person because you can check it out yourself and see how it actually looks and works. Unfortunately, it might be difficult to find rare antique tractors close to where you live.

If that’s the case, there are several online websites we recommend where you can sell or buy antique tractors:

This is a family business based in Wisconsin, Milwaukee, and it specializes in renovating and selling rare antique tractors. You can either visit their store in person or check out listings online.

It’s one of the most popular online marketplaces, and it includes antique tractors being sold by people all around the globe. Currently, there are over 8,500 listings related to them, and that’s just on the American website.

There are several other eBay websites designated for European markets, so don’t forget to check those out too. On eBay, you can also sell your own antique tractor or put it up for auction.