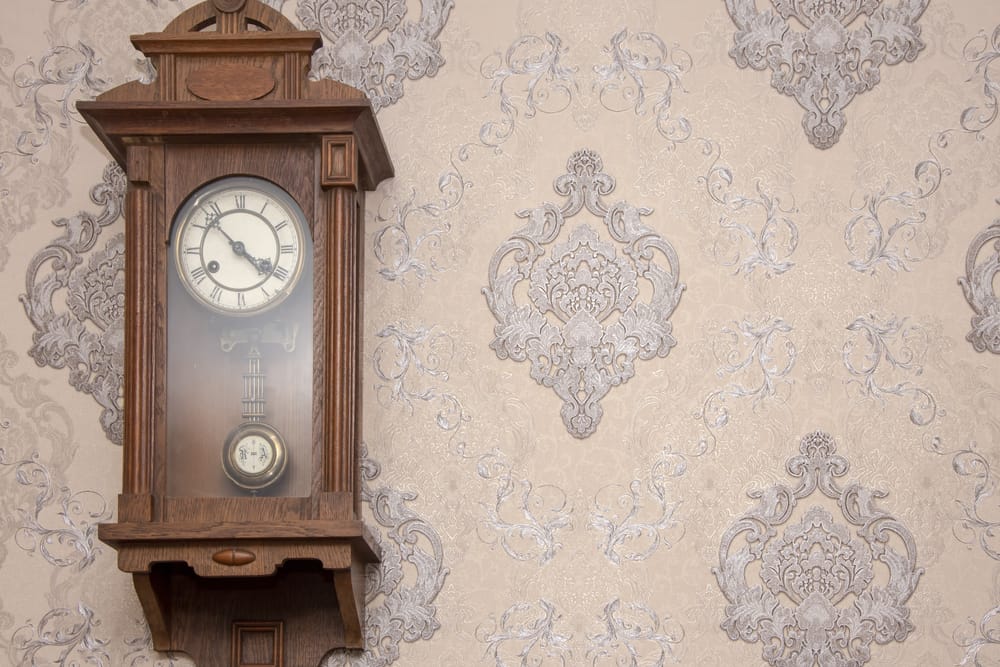 The first mechanical clocks were invented in 14th century Europe, and could only be found in town halls or cathedrals. However, some 200 years later, the first wall clocks which could fit in any home were constructed.

Today, antique wall clocks are highly sought-after items by collectors and hobbyists alike. Old wall clocks can tremendously aid the interior design of your home, and give it a unique flair that will impress your guests.

In this article, we’re going to take a look at some of the most prominent types of antique clocks, then help you identify them, and finally talk about how much money an antique wall clock can cost.

Wall clocks are the largest category of antique clocks, including dozens of different and distinct design types. We can’t cover all of them, but some of the most popular and fascinating are as follows:

This type of wall clock was first created in 1802 by a clockmaking brother duo Aron and Simon Willard. In the U.S, they were considered the best clockmakers of their time, especially after designing the first banjo clocks.

Banjo wall clocks are, as the name suggests, shaped like a string instrument banjo. These clocks are typically long and thin, with a round face and many decorations on the edges. Banjo clocks were particularly popular in the United States during the 18th and 19th centuries, and they are still sought-after today.

This is arguably the most playful wall clock type, as it features a house-shaped case that is occasionally left by a chirping cuckoo at specific hours of the day. Such clocks first appeared in Germany and quickly spread across entire Europe and later the U.S.

This type is characterized by its large size and ornate design which is like no other. Cartel Clocks were popular in Europe, specifically France during the 18th and 19th centuries.

Such clocks usually feature detailed paintings or sculptures on the dial or the sides of the case. Cartel clocks were used as status symbols by the European elite, and today are some of the most expensive antique wall clocks.

This type of wall clock was found in nearly every tavern in 18th-century Europe. They are characterized by huge and robust dials with few to no decorations. It came to be out of widespread tax in Europe that taxed people for simply owning clocks.

Most people got rid of theirs, but tavern owners kept theirs and even double-downed on their clock size to draw in the additional clientele that was interested to know what’s the time of the day.

How Do You Identify An Antique Wall Clock?

Identifying what kind of antique wall clock you have is a much easier task compared to identifying other antiques. Most wall clocks were expensive, and manufacturers took pride in their masterpieces of clockwork.

One of the most popular places where clock manufacturers put their mark was the face or the dial of the clock. You’re likely to find the company’s logo or name engraved or printed at the center of the dial.

If you can’t see it, it could be displayed somewhere on the edge of the dial and hidden by the clock’s bezel. In such cases, you’ll have to temporarily remove the bezel and inspect what’s hidden behind it.

If you couldn’t find the manufacturer’s mark on the dial, your second best bet is the clock’s case. In such scenarios, the mark is likely a label that’s glued at the back of the clock’s case. Such a scenario is more likely with younger antique wall clocks.

Finally, if you could find the manufacturer’s mark neither on the dial nor on the case, it’s probably hiding on the clock’s movement plate. To check for it, you are required to take apart your clock, which isn’t recommended if you have no experience in it.

However, the clockmaker’s mark on the movement plate nearly always includes all information about the clock, including what company made it, what type of patents it’s using, and even the year of production.

If you managed to find the manufacturer’s mark, you’ve basically identified the antique wall clock. The mark will have all the necessary information for you to learn more about the clock, either online or offline. For offline resources, we recommend the following books:

This 271-page book has over 1,400 entries on antique clocks, including hundreds of wall clocks. It even has a 16-page section guide that can help you identify your antique clock.

This book is incredibly useful if you’ve succeeded in finding the clockmaker’s mark on your clock. It has several chapters, including:

Now that you’ve hopefully identified your antique wall clock, we can see how much it’s potentially worth.

Are Old Wall Clocks Worth Anything?

Some antique wall clocks have sold for mind-boggling sums of money, like millions of dollars. However, you could also buy a 100-year-old wall clock for under $100.

Unfortunately, giving a complete price guide for every single model of wall clock ever made is simply impossible. There were simply too many clockmakers and wall clock models for it to fit in a single book, let alone in an article.

The best we can do is to take a look at some recently sold antique wall clocks, so you can get an idea of how much an antique or vintage wall clock could cost. But before doing that, it’s useful to know what factors influence the value of old wall clocks:

As with all antique items, the age of an antique wall clock positively correlates with its value. To put it simply, the older the clock, the more valuable it’s going to be. Old wall clocks carry a piece of history which makes them that much more valuable.

It comes as no surprise that no one is going to pay much money for a clock that was made a few years ago. However, it’s not the only factor and is just a guideline.

How much damage a wall clock has sustained is another important factor determining its value.

If it shows visible damage in scratches, dents, or cracks, its value is going to be much lower compared to the exact same clock that’s in pristine condition.

Most antiques and collectibles are bought to be safely displayed and never used for their intended purpose. For example, no one is drinking coffee out of a 200-year-old porcelain cup. However, some antiques, like typewriters, are bought to be used.

Wall clocks fall in this weird middle zone between these two categories. Using a clock for its intended purpose isn’t likely to deteriorate its condition drastically, so even expensive antique clocks are sometimes bought to be used.

As a result, antique wall clocks which are working and can accurately show time are more likely to be valued higher than those which aren’t working and require repairs.

However, there are some clocks that aren’t extremely old but have sold for tons of money. It’s because some wall clocks were made in extremely limited runs, making them very rare and difficult to find.

Knowing that we can look at some antique wall clocks that were sold on eBay in 2022:

While this wall clock doesn’t even count as an “antique”, because it’s younger than 100 years old, it has sold for $4,500 because of the incredible craftsmanship that has gone into making it. This clock is simply breathtaking!

This 44-inch tall wall clock has a walnut case and is adorned with various ornaments across its case. Most importantly, it was made specifically for the famous Mermod & Jaccard Jewelry Company, making this clock unique in its backstory.

This 41.5-inch tall wall clock has no manufacturer’s mark, but the owner claims it was made in the 1880s. Such old clocks usually sell for much more, but the lack of branding made this one sell for just over $60.

This 22-inch tall clock was made in the first Seiko factory but was auctioned off for just $26. Similar clocks have sold for much much more.

However, this scenario shows how the demand and desirability of an antique clock can drastically alter its value at any given moment.