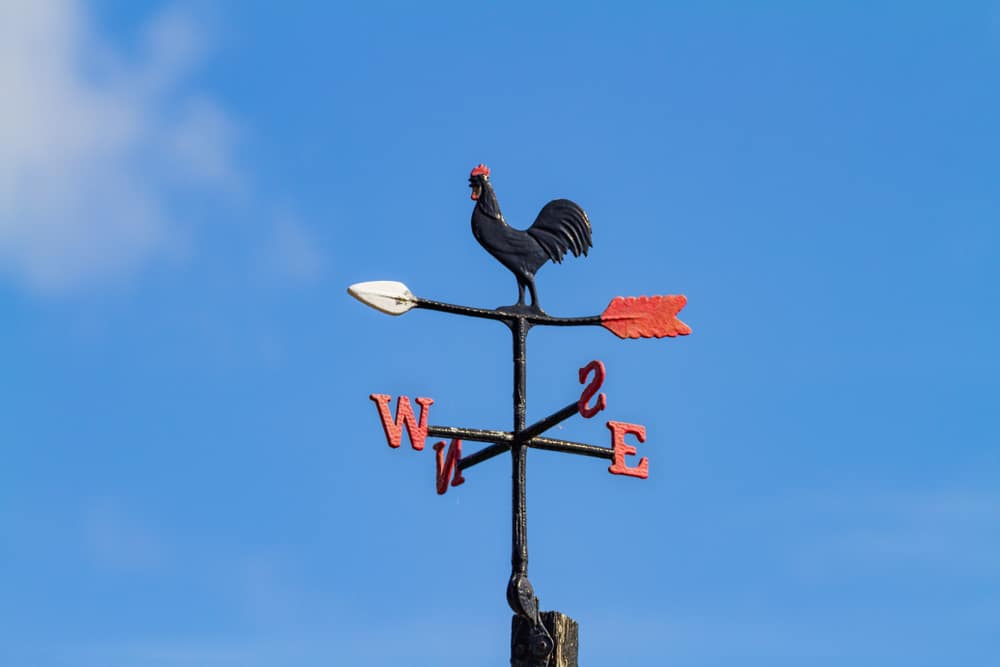 What is the value of antique weathervanes? This is a question that has fascinated collectors for years. Maybe you have one and you are wondering the same thing.

Weathervanes come in all shapes and sizes, and they can be made from a variety of materials. They have been used for centuries to indicate the direction of the wind, and they are now considered to be quite valuable antiques.

In this blog post, we will take a look at the history of weathervanes and discuss some of the different types of antique weathervanes that are available on the market today. We will also explore the value that these items can fetch at auction, and highlight some of the most interesting examples of weathervanes over the years.

What Exactly is a Weathervane?

A weathervane is an object that is mounted on a roof or other elevated structure, and is used to indicate the direction of the wind. Weathervanes are usually made from metal, and can be either free-standing or attached to a building.

The first weather vanes were created by the Ancient Greeks, and were used to decorate public buildings such as temples and stadiums.

The Greek astronomer Andronicus is credited with creating the first recorded weathervane, which he placed on top of the Tower of the Winds in Athens. It is said to have had a man’s head and torso and a fish’s tail.

By the 9th century, weather vanes had become commonplace in Europe, and they began to take on different forms depending on their location. For example, they were then found on Scandinavian Viking ships, and they were also found on European church steeples.

Eventually, weathervanes made their way to the United States of America, where one of the first recorded uses was a copper rooster imported by the Dutch Reformed Church for one of their buildings in about 1656.

In the late 1700s, a group of weathervane makers grew within Boston, Massachusetts and also in the state of New York. The act of manufacturing weathervanes really took off in the early 19th century, and by the late 19th century, weathervanes had become increasingly popular–especially for public buildings and for outbuildings in the farming community.

Then during the 20th and 21st centuries, old weathervanes continued to be popular, this time as either collectables or as rustic decorations for homes and businesses. Not only do they make great folk art for one’s living room wall, they also can fetch really impressive prices at auction.

Antique weathervanes were known by a number of different names through the years, depending on the region and era. Some of these names include weather vanes, wind vanes, weathercocks, and wind gauges.

They adorned firehouses, barns, churches, town halls, and other types of buildings, exemplifying what is now an iconic piece of American history. A person only has to see an old weathervane to be reminded of the good old American dream and the tenacity shown by this nation’s founding citizens.

While some vanes travelled to America with immigrant groups from their home countries, others were made within the States. In the 18th century, many American makers of weathervanes were one-man operations, supplying their local community with the vanes they needed. By the end of the 18th century and into the 19th century, however, makers were slowly replaced by a number of different companies producing weathervanes more quickly and efficiently.

While we don’t have a lot of information about each manufacturer, we do at least know many of their names. Here are some of the most popular and well known American manufacturers of weathervanes during this period in history:

As we’ve mentioned earlier, since the nation consisted of the Eastern states at this time, these manufacturers were mainly located in the New England areas, mainly Massachusetts and New York.

Now that we’ve explored the history of weathervanes and their manufacturers, let’s look at some of the more popular antique weathervane designs.

Antique weather vane designs became a symbol of folk art in America, quickly taking on many different shapes that were central to the farming community. Such shapes mainly included farm animals such as the following:

These are the same designs that are well loved today. Collectors and those who love Americana or farmhouse decor like to use weathervanes as decorations on their walls or in their gardens, for example.

Are Old Weather Vanes Worth Anything?

If old weathervanes are so popular, even today, you may be wondering if they are worth any money. The good news is, yes! Antique weathervanes can be worth a considerable amount of money.

The value of a weathervane will depend on its age, condition, material, maker, rarity, design, and provenance, of course, but even then, they can go for quite a lot! For example, antique weathervanes can be found on eBay for anywhere between $100 and $25,000+.

Very interesting and rare metal weathervanes go for even more than that! For example, a 19th century weathervane featuring a team of horses pulling a fire wagon and two fireman sold at an auction in 1999 for a total of $222,500! It was manufactured by Cushing & White and Waltham Mass., and it is said that the weathervane adorned a firehouse in Lowell, Massachusetts.

Another example is a striking metal weathervane of molded copper featuring a rider on a horse. Created by J. Howard & Co. around 1860, this copper weathervane is extremely rare. As such, a Boston folk art dealer bought it at a Sotheby’s auction in 1990 for an amazing $770,000!

This is the most anyone has ever paid for one of these stunning weathervanes!

If you are thinking about buying or selling an antique weathervane, it is important to do your research and find out as much as you can about the item. This will help you to determine its value and, if selling, find a buyer who is willing to pay the right price for it.

How Can I Tell If My Weathervane is Antique?

An expert can help you identify these makers, too.

Another way to tell if a weathervane is antique is by looking at its provenance. Provenance is defined as the history of ownership of an antique or where it came from. So, if you can trace the weathervane back to its original owner, chances are it’s antique.

Or, if you know the region from which it came, an expert can help you identify the maker, date the item, and give it a proper valuation.

The material of typical weathervanes from yesteryear can also be telling. For instance, early weathervanes were often made from cast iron, zinc, copper, and wood. These materials were used because they were readily available and easy to work with.

One of the best ways to tell if a weathervane is antique is to look for signs of wear and tear. If the weathervane is made from cast iron, for example, it is likely to show some rusting and pitting. If there is a patina on the metal, such as on copper, that is another sign that it is an antique.

If it’s wood, there will likely be worn-down corners and hard edges, and there will possibly even be cracks caused by exposure to the elements for so many years.

If you are unsure whether or not your weathervane is antique, it is always best to seek the advice of an expert.

In conclusion, antique weathervanes can be worth a considerable amount of money. The value of a weathervane will depend on its age, condition, material, and rarity. If you are thinking about selling an antique weathervane, it is important to do your research and find out as much as you can before selling it because it may be worth more than you imagine!

Do you have an antique weathervane that you are looking to sell? We would love to hear about it! Please leave a comment below and tell us your story.