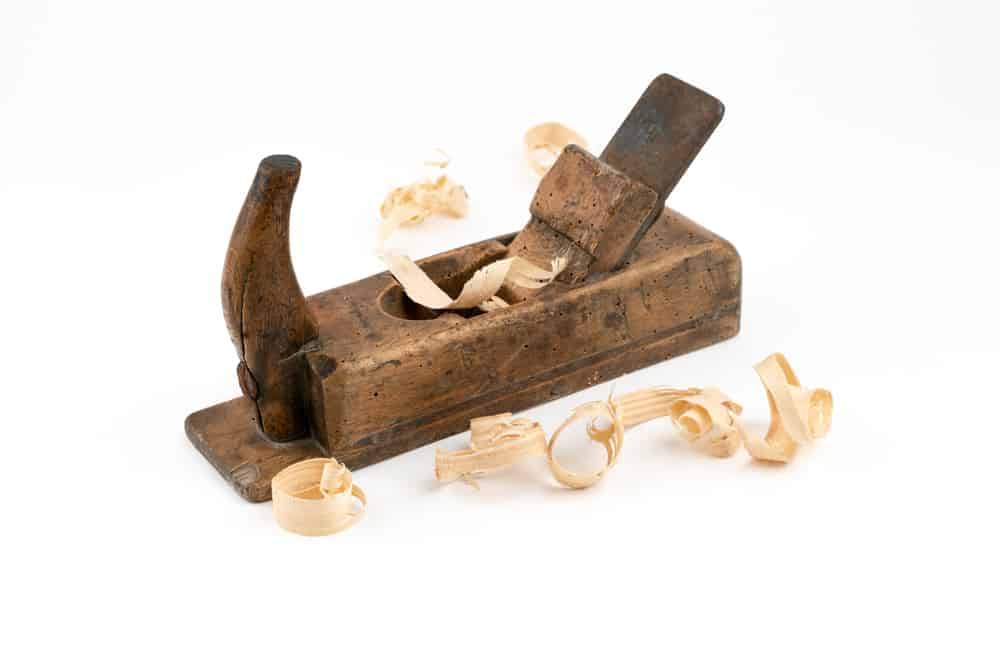 Tools back in the day had much higher quality. They were made using better materials and with more attention compared to today. A few centuries ago companies legitimately tried manufacturing the best products possible.

Today, businesses try cutting as many edges as possible to save on production costs, which results in inferior products. Because of that, many woodworkers prefer working with antique wood planes instead of their newer counterparts.

In this article, we’ll let you know everything you need to know about antique wood planes, from their history to tips for dating and identifying a plane.

Wood planes were probably some of the first tools used by humans for shaping wood. At first, they were probably just sharp sticks or rocks that were used to cut out rough shapes in wood However, as technology advanced, so did wood planes.

Tools of this kind were used by most civilizations around the world, from Asia to Africa for thousands of years. Wood planes closely resembling modern ones were widely used in the middle ages and renaissance. They had metal blades set into wooden bodies for easy use.

But it wasn’t until the mid-1860s that the first wood planes with cast iron bodies were mass-produced. Leonard Bailey filed several patents for the tool which eventually inspired all other iterations of what today we call a “wood plane”.

Today, there are many different types of wood planes, each having unique characteristics and serving different purposes.

There are over 100 types of wood planes, and some woodworkers even create their own unique planes for the specific work they have to do. Covering every single type is simply impossible, but here’s a list of some of the most popular types that you’re likely to encounter:

One of the smallest wood plane types, which makes it great to use for detailed projects. Most block planes range between 3 and 7 inches in length and have either a 12-degree or 20-degree blade.

This type of wood plane is also used to remove end grain and smooth out the surface of the wood, making it one of the most widely used tools in woodworking.

This is another small plane, usually measuring anywhere from 3 to 4.5 inches in length. It has a curved body and blade, which is set at a 45-degree angle. As a result, you can use a bull nose plane to make detailed cuts or create half-round corners.

Its small size makes bull nose planes easy to control and maneuver, and it’s supposed to be used with a single hand.

This type of plane is also called a trimming plane and essentially serves the same purpose as a woodworking chisel. You can use it to trim away small amounts of wood or byproducts of woodworking like dried-up glue.

Because of its shape and blade position, a chisel plane can reach spots that are otherwise unreachable with other types of planes. It’s one of the best planes to own regardless of the type of woodworking you do – you’ll always find where to use it.

This wood plane type is usually 12 to 17 inches long and has a straight blade with rounded corners. It makes jack plane a great all-around tool, especially when working with longboards.

You can either use it for general shaping and sizing or for the initial smoothing of the surface.

These wood planes are made entirely out of wood, except for the blade. They are renowned for their durability and are primarily used for molding wood because such planes are usually geared with curved iron.

The blade also helps molding planes to be used for fine-detail work or surface shaping.

As the name implies, this type of wood plane is primarily used for smoothing the surface before applying a finish. Such planes are usually anywhere between 5 to 10 inches long and sometimes are used for leveling high places.

This type of plane is one the longest, usually ranging anywhere from 20 to 30 inches. Such length alone makes it great for sizing huge boards, and it’s one of the first wood planes being used at the start of every big project.

You can easily remove large amounts of wood with a single stroke, but it can also result in unfixable mistakes if you slip up. Most often, a jointer plane has its iron set at a 45-degree angle, making it perfect for straightening out curved boards.

How To Date a Wood Plane?

There are several things about a wood plane that can help you estimate its age. While you can’t know the exact date of production if it’s not embossed somewhere on the tool, you can at least get a rough estimate from these things:

Wood planes made before the mid-1950s have adjustment bolts with a rounded inside edge, while those made after the mid-1960s have nuts with a square inside edge.

Frogs are wedges holding the plane’s iron in place. The frogs of planes made before the mid-1950s have straight sides, while those made after that have curved, ogee-shaped sides.

Wood planes were never seen as antique items worth preserving and collecting. They were always used as intended – for woodworking. As a result, most old wood planes show extreme wear and tear on their base.

While you can’t correctly date a plane simply from its condition, it’s something worth keeping in mind.

The vast majority of the oldest modern wood planes had their front (knob) and back (tote) handles made of rosewood. Those made after WWII have handles made of beech, which was a cheaper material compared to rosewood.

You can distinguish between these woods by the way they look. Rosewood has much bigger pores than beech. If you aren’t an experienced woodworker, you should ask someone who is and get their opinion on what wood was used for the handles.

How Do You Identify a Wood Plane?

Identifying a wood plane is no easy feat, especially if it’s a European plane. Those made in the U.S or the U.K are much more documented and you can easily find information about them on the internet. Unfortunately, European wood planes aren’t documented as much.

Regardless of where your wood plane was made, you have to follow the same general steps to identify it:

Unless your wood plane was custom-made, it most likely will have a maker’s or manufacturer’s mark. It’s an imprint of the company’s logo which made the plane.

Sometimes it also includes additional information like model number, date of production, or blade width. You can find the maker’s mark of your wood plane on its base, but keep in mind that there might also be other imprints, so don’t get confused.

The previous owner of the wood plane might’ve imprinted his own logo, or the base could’ve been damaged through its use. However, if you find the manufacturer’s mark, now you know what company made it and can continue the identification.

Now that you know who made your plane, you can start identifying it with the help of various resources. Unfortunately, there’s no single wood plane identification resource that includes every single plane ever made.

However, “A Guide to the Makers of American Wooden Planes” by Thomas L. Elliott comes close. This book was first published in 1983 and is the best standalone resource for identifying wood planes made in the U.S.

The latest, 5th edition, includes over 4500 biographical entries, over 6100 imprint illustrations, 3030 wedge outlines, and more than 3000 ratings of scarcity and value.

You can also look for a guide specific to the manufacturer of your plane. Sadly not all manufacturers are loved equally, and some have much more documentation than others.

For example, most woodworkers prize wood planes made by Stanley Hand Tools the most. Because of that, there are tons of elaborate resources you can use to correctly identify your Stanley wood plane.

You can head to The Superior Works, which includes in-depth information about every wood plane ever made by Stanley.

If you’re not a fan of online websites, you can also buy the book “Stanley Planes: A Guide to Identification and Value” by Hans Brunner, who put his 25 years of experience into a single resource.

He also wrote a similar book “Mathieson Tools: A Guide to Identification and Value” which can help you if your wood plane has Alexander Mathieson & Sons mark. It has illustrations, descriptions, price estimates, and even partial re-prints of Mathieson catalogs.

To identify wood planes made by Sargent, we recommend the book “The Sargent Hand Plane Reference Guide for Collectors and Woodworkers” by Don Wilwol. Unfortunately, it’s out of print and might be difficult to come across.

If you can’t get your hands on the book, you can head to this website, which has a list of all Sargent wood planes sorted by the number. You can identify your plane by comparing it to the pictures.

Listing reference and identification resources for every single wood plane manufacturer is out of the scope of this article. However, you can try looking it up on Google by typing “X wood plane identification” where X is the brand of your plane.

We always recommend getting an expert’s opinion on every antique you’re interested to learn more about. If you have a wood plane and want to know when it was made, its model, and even its estimated value, you can bring it to your local antique shop.

The value of antique wood planes ranges vastly even within the same models. You can find some small block planes for as little as $50, but some planes have sold for thousands of dollars.

Because of that, it’s better to understand what factors influence the value of wood planes, instead of listing price ranges for some of the models. Keep in mind that these are just general trends and guidelines, and value is subjective and can change from day to day.

The same rule of thumb applies to all antiques, including wood planes; the older and rarer the item, the more valuable it is. People are willing to pay much more for items that are difficult to procure compared to those that can be bought anywhere.

If it’s an auction of a rare wood plane, bidders might have no idea whether the same type of wood plane will be sold ever again. As a result, they’re willing to spend as much as they can to win the auction.

Age and rarity are connected because in most cases the rarest items are also the oldest.

Antiques carry their own history and background with them. Wood planes that have historical importance or were owned by world-renowned woodworkers are always going to sell for much more than their counterparts with no such story.

Finally, wood planes in working order are always going to sell more than those which require repairs. General condition isn’t that important to the value of a wood plane, because these were tools that were used practically instead of being reserved.

Additionally, most people buying antique wood planes are planning to use them themselves. In this way, wood planes differ from most usual antiques that are being collected instead of used practically.

Nonetheless, the general condition of a wood plane is still impacting its value. Two exact same wood planes can sell for vastly different prices if one is preserved and the other is full of scratches, dents, and cracks.