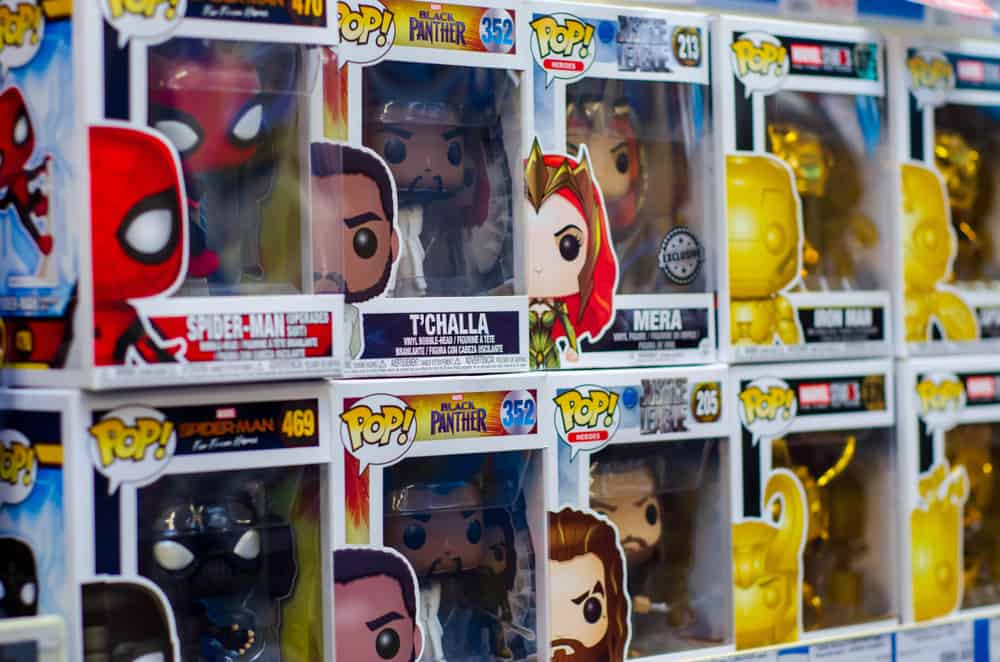 From superheroes to celebrities, TV shows to video games, and everything in between, chances are there’s a Funko Pop out there for just about everything.

Sought by fans for their fun, whimsical appearances, these small vinyl figurines come in all shapes and sizes and are highly collectable. Every day brings a new pose, a new costume, or variation to keep fans hunting for their favourites.

It’s no wonder that certain Funko Pops can fetch a small fortune at auction, given how active fans are at collecting exclusive editions.

Which brings us to a key question – just how good investment do Funko Pops make? And what should you be aware of when deciding to buy one?

Funko Pops make for slow, but effective investments because their value increases over long periods. First, figurines are released to celebrate a new show, film or game’s launch. Fans will collect merchandise to buy into that franchise.

As time passes, the merchandise changes and original products become rarer and thus more valuable. If and when the franchise releases something new (like a show, or film), it reignites people’s interest in older collectables.

Take for example YouTuber Top Pops, who bought a Buzz Lightyear Funko Pop for $50 some years ago. After a while, and because of the announcement of a new Buzz Lightyear film later this year, the Funko Pop is now valued at an incredible $1,150.

For example, limited edition Stan Lee signed Pops became some of the most expensive figurines in history, when the comic book veteran died in 2018. Some auctions still list them as high as $20,000 to this day.

Funko Pops of basketball star Kobe Bryant skyrocketed in value when the sportsman died in 2020. Although it is hard to predict when or if these media events happen, they can transform cheap, ordinary Funko Pops into small fortunes overnight.

Standard Funko Pops are readily available to buy. You can find them in many retail stores, on online sites like Amazon and eBay, as well as in gaming shops, at conventions and at special events. Funko even also sells directly via its official website.

What makes collecting Funkos even more inviting is their price point. Expect to pay as little as $8-$12 for a new vinyl figurine.

‘Vault’ Funko Pops are figurines which are no longer in production – and anything that has stopped production can usually be sold at a top premium.

Vaulted Funko Pops are one of the key areas that investors concentrate on when buying Funko Pops, because:

ValutedFunkoPops.com has a database of rare Funko Pops, along with a selection of auction listings where you can buy them – perfect for spotting opportunities in the Funko Pop market.

5. Funko Pops are easy to value, and sell!

So you’ve bought your first Funko Pop. Now what?

The first thing we would recommend is working out the actual value of your figurine. PopPriceGuide is a price comparison site that showcases how much your Funko Pop is worth.

It can also tell you where you can buy more copies of the figurine, and if there are variants or different models available. What’s more, you can also see price trends of your Pop to see when is a good time to sell. There’s also a marketplace where you can sell directly to genuine collectors.

Both Amazon and eBay have thriving Funko Pop communities. You can also sell directly to collectors through social media, including Facebook’s Marketplace and Twitter, using the hashtag #FunkoPop.

Whilst all Funko Pops will eventually run out of production, some variants will only have a limited release. You can tell how many were made in production by a Pop’s ‘pieces’ number, usually located on the side of the box.

Low piece numbers will create a surge in interest (and price!) in a Funko Pop. Freddy Funko as Big Boy’, for example, only has 520 pieces, meaning it’s incredibly rare….and incredibly pricey to buy!

Many people were sceptical of Funko Pops at the start, thinking they were an overnight trend that would soon be replaced.

But Funko Pops have lasted the test of time, and are based on everything from mainstream media and pop culture.

With so much diversity, it’s hard to imagine a world without them. There will always be new brands and franchises you can invest in, and most importantly, fans you can sell to.

As with any investment, there are some things to be wary of when collecting Funko Pops. Let’s take a look at the most important ones:

As we know, the value of Funko Pops will often follow consumer trends. What’s in one moment, could be out the next.

So while Funko Pops may increase in value over time, waiting too long may deny you a nice profit. Knowing when to sell, and when not to, is just as important in this industry as any other.

2. Low-profit potential on some Funkos

The best Funko Pop investments to make are buying low-cost figurines, seeing their value increase, and selling them at a premium.

Buying an expensive Funky Pop to resell can be unwise, as you might not be able to make a profit. Also worth noting that the value of the Pops in question could drop at any moment, resulting in a huge financial loss.

PopPriceGuide is a great resource to use. It has data on price fluctuations for specific Funko Pops and can tell you what profits you can expect at auction.

3. Don’t forget about the box!

More and more, collectors expect the figurine to arrive in their original box. If you’ve bought a Funko Pop at a car boot sale, or from someone else but without its packaging, expect it to decrease in value.

Some boxes like Director Freddy have special commemoration stickers and are themselves collector items – in these cases, it’s wise to keep the box in as good a condition as the figurine itself.

4. Big sellers are becoming impossible to get

We all dream of having that one Funko Pop that sells for thousands of dollars. But in reality, some of the rarest Funko Pops are impossible to get.

So while it’s nice to read lists of these record-breaking sales, the likelihood of you coming across one is quite low. That’s because these figurines were either:

Take for example the Golden Willy Wonka and Oompa Loompa Funko Pop pair. Only 10 sets were created, making them some of the rarest Funko Pops in existence. And valued at just under $15,000, it’s unlikely you’ll come across them!

Because you can buy Funko Pops for as little as $8, many people think there’s very little risk involved. That it’s inexpensive to start collecting them. And so they buy large quantities of Pops, only to be left waiting, and waiting.

Before you make a considerable investment, consider the hidden costs:

Because of their low cost, widespread availability, and more people realising their potential, there’s an increase in the number of sellers entering the Funko Pop market.

More sellers can oversaturate the market, increase competition, and ultimately affect your profits.

What Funko Pops are worth money?

One of the big questions Funko Pop collectors ask is what figurines are worth the most money.

Funko Pops come with different poses, character heads, and costumes – all of which feed into how rare or truly special a figurine is. Some even GITD (glow in the dark), further adding to their rarity.

In this list of rare and valuable Funko Pops, you can see how different colors, costumes and more plays a huge part in setting one Pop apart from another, increasing its estimated value:

Some rare vinyl figures like Frankenberry Freddy funko look quite out of place in a Funko Pop collection. But they can even fetch up to $8,800 at auction.

When we think of collectables, we think of pristine packaging, sealed and unopened. But Funko Pops are very different.

Because their boxes aren’t sealed, Funko Pops can be opened and put on display without losing any of their value. But it is important to keep the box, packaging, and any additional props safe, as many genuine collectors will expect this at the point of sale.

What makes collecting funko Pops so exciting is that new figurines are being made every week. And with new markets and new trends, come new opportunities to make sizeable investments.

What Funko Pops should you look out for in the shops this year?

YouTuber Top Pops has rounded up what he feels are some of the best buys to make over the next few months. These include:

Some genres of Funko Pop prove to be timeless and are well worth investing in whenever you get the opportunity.

Invest in these Funko Pop niches

Several niches within the Funko Pop industry are proving to be very lucrative. If you’re buying purely to invest, it may be worth your while to consolidate your effort into buying from just one particular franchise. These include:

As one of the most popular franchises across TV, film and gaming, Star Wars Funko Pops are always a safe investment to make. And with several new titles on the horizon, including Boba Fett and Obi-Wan Kenobi, there will always be new figurines on the market, waiting to be snapped up.

As one of the most successful TV shows in history, Game of Thrones has some of the most sought-after Funko Pops. The Jaime Lannister Freddy Funko is worth $3,000 while the ‘Bloody’ version’, exclusive to the 2013 San Diego Comic-Con, fetches up to $10,000!

And with a new series soon to be released, expect more figurines shortly.

With every superhero comes signature costumes, poses, weapons, and more. From Batman and Joker to Dr Strange, Scarlet Witch and Ironman, comic book fans are passionate collectors and there’ll always be a market for Funkos in this world.

Disney and Pixar release new Funko Pops with every film and TV show, and both adults and children go to great lengths to secure their favourites. These Pops are timeless classics and regularly feature on the most valuable Funko Pop lists, including Monster’s Inc, Buzz lightyear and Dumbo.