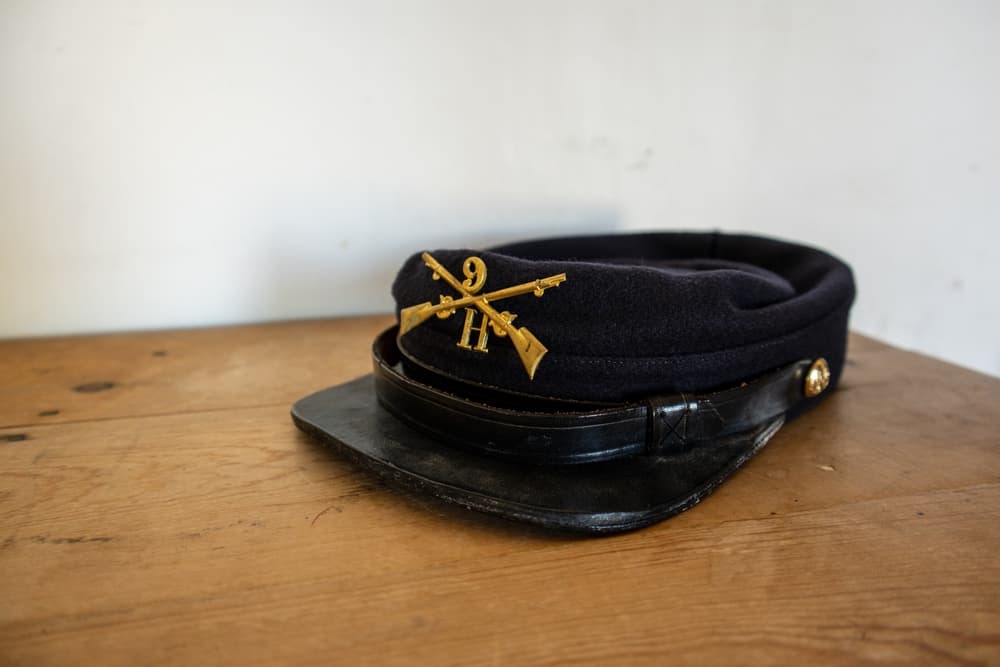 American Civil War is one of the most important parts of American history. It was a bloody conflict between North and South, between the Union and Confederate states. No other episode of American history was so many times mentioned in books, schools, culture, and everyday life.

It makes no wonder – this war and its aftermath shaped American society, abolished slavery, and set the foundation for racial equality. And the fact that it was fought not so long ago, makes this war even more interesting to history geeks.

Various memorabilia from the Civil war is still in great condition. Many of such items are passed as family heirlooms from one generation to another, but many of them are today sold as collectibles.

Authentic American Civil War hats are quite popular among Civil War relics. They were made in several different styles, which makes them perfect for collecting. Let’s learn a bit more about them:

The Styles of Civil War Hats

To distinguish their soldiers, Union troops wore a blue uniform and Confederate troops wore gray. Of course, different ranks inside one army division could also be distinguished by their uniforms, buttons, and other insignia. There were also specific uniforms for the artillery, cavalry, and infantry. With all that in mind, here are different styles of Civil War hats:

Also known as wool kepi hats, these hats were issued to private soldiers (lowest rank) in both the Union and Confederate armies. The US kepi hats originated in France. This type of hat had a sunken top and a black leather visor.

Kepis are also known as “McClellan caps”, after the Union commander, G.B. McClellan. This hat often had a hat cord fastened with brass side buttons and a center brass buckle. Some of the kepis were decorated with wool tassels.

These caps were also given to the lowest rank soldiers, and they were often confused with kepis due to their similar appearance. However, forage caps didn’t have an indent at the top, and they actually originated from the shako military cap. The US forage cap was also known as a “bummer cap” or “McDowell cap”.

Sometimes called “Jeff Davis”, this hat was mostly worn by the Union soldiers, but it could be also seen on the heads of Confederate soldiers. This hat was named after William J Hardee, a career officer that served in the US army several decades before the outbreak of the Civil War.

Hardee hats were stiff and had a conical, pilgrim-like shape. They had wide brims that were bent on two opposite sides. Often they were embroidered and adorned with black ostrich plume feathers. However, these hats were hot and heavy, and soldiers often complained when wearing them. That’s why they were usually worn on formal occasions.

Slouch hats looked similar to the cowboy hats with their wide brim and acorns, but they had one side vertically bent (similar to the Hardee hats). It was fairly common among the officers, generals, and cavalrymen.

Slouch hats had chin straps that prevented them from falling off the head. The slouch hat is also known as hat KFF, or hat khaki fur felt. This hat is used in the US Army even today, and many other countries adopted this style of hat, including the United Kingdom, France, Australia, Germany, India, New Zealand, and many others.

These hats were mostly worn by the Confederate soldiers because many of them came from the rural areas in the South, where they worked in the fields. When they were mobilized, those men brought their hats to protect them from the sun.

Planter hats were made of straw and had a black ribbon that separated the hat’s crown from its wide brim. Their tops were flat, and their dimensions, width, and height varied. These hats often contained a cotton sweatband.

Probably the first person you think of when seeing a bicorn hat is Napoleon. However, this hat was also worn by the Naval officers during the American Civil War. It evolved from the tricorn hat.

Bicorn hats were black, and they had wide brims that were raised and pinned together, making a fan shape. The bicorn hat was popular up until World War I, and it is rarely seen nowadays except in the museums or during formal occasions.

The Manufacturers Of Civil War Hats

During the Civil War, there were several companies that produced military hats. The first one of them is Lewis J. & Isaac Phillips of New York. This company produced approximately 800.000,00 forage caps.

Another company that produced a massive amount of forage caps was Geo. Hoff & Co. of Philadelphia, with 620,000 forage caps produced between 1861. and 1865.

Brooks, Matthew of Philadelphia was a company that manufactured around 26,000 contract caps for the Union Army from 1862 until the end of the war. Thompson, Goodrich & Co. of Cincinnati manufactured roughly 86,000 forage caps.

Thomas Murphy and William Griswald & Company from New York was a company that started producing forage caps in 1862, and it produced 583,000 forage caps until the end of the war.

G. & S. or Griswald and Son of New York was a company whose hats were remarkable because of their chinstrap.

If you are looking for an authentic Civil War hat and you don’t want to buy a replica, you need to be careful. When inspecting a potential purchase, pay close attention to the material the hat is made out of as well as the stitching.

Genuine Civil War hats were typically made of wool or cloth and had straight, even stitches. If the hat you’re looking at is made of a different material or has crooked stitches, it’s likely a fake.

In addition, authentic hats will often have sweat stains around the band – something that is difficult to replicate in a counterfeit product. Authentic hats will show other signs of wear and tear, typical for military uniforms and ordnance.

Once you established that you are really looking at an authentic Civil War hat, you can further identify its type by simply looking at its appearance. Check for the insignia and any other alterations.

Soldiers loved to personalize their caps and uniforms. These alterations can also tell you a lot about the socio-economical status of the soldier that wore the cap.

For example, soldiers loved to decorate their hats with various feathers, taken from the goose, ostrich, peacock, etc. The richer individuals could afford the more exotic feathers, while the soldiers from more humble backgrounds used more common feathers.

Since the warring parties tried to color-code their uniforms, you should be able to easily distinguish whether the hat belonged to a Confederate or Union soldier.

What Is A Civil War Hat Worth?

The prices for Civil War hats range from around $100 to several thousands of dollars. The price depends mostly on the hat’s condition and rarity, and whether they are original or a replica. Let’s take a look at some Civil War hats for sale and their prices: 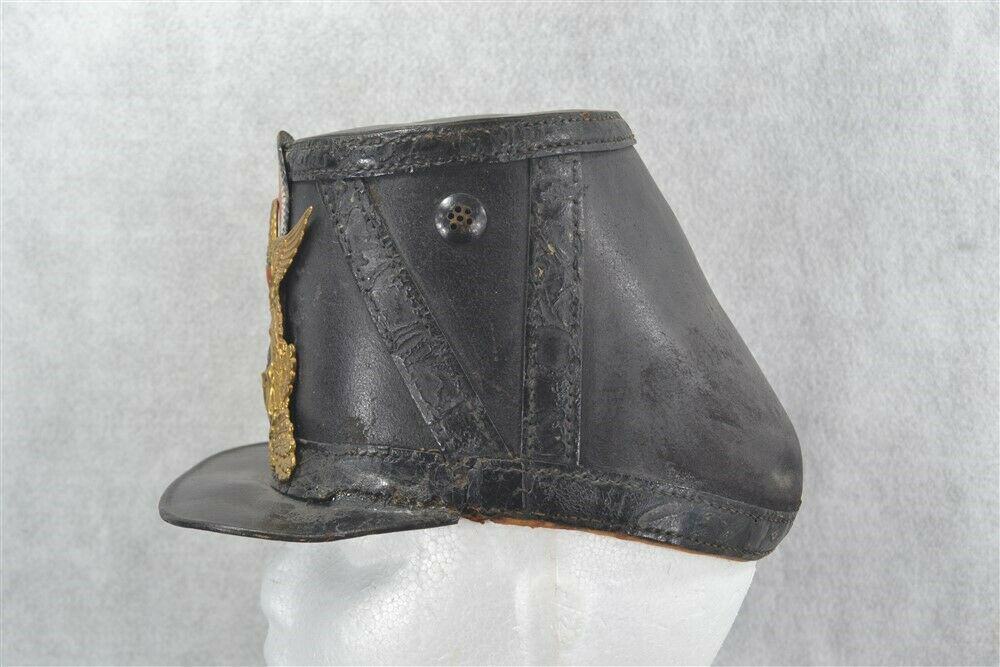 Although its chin strap is mostly gone, and there are visible signs of damage, this forage cap is still in a good condition and its price is $1,075.00. 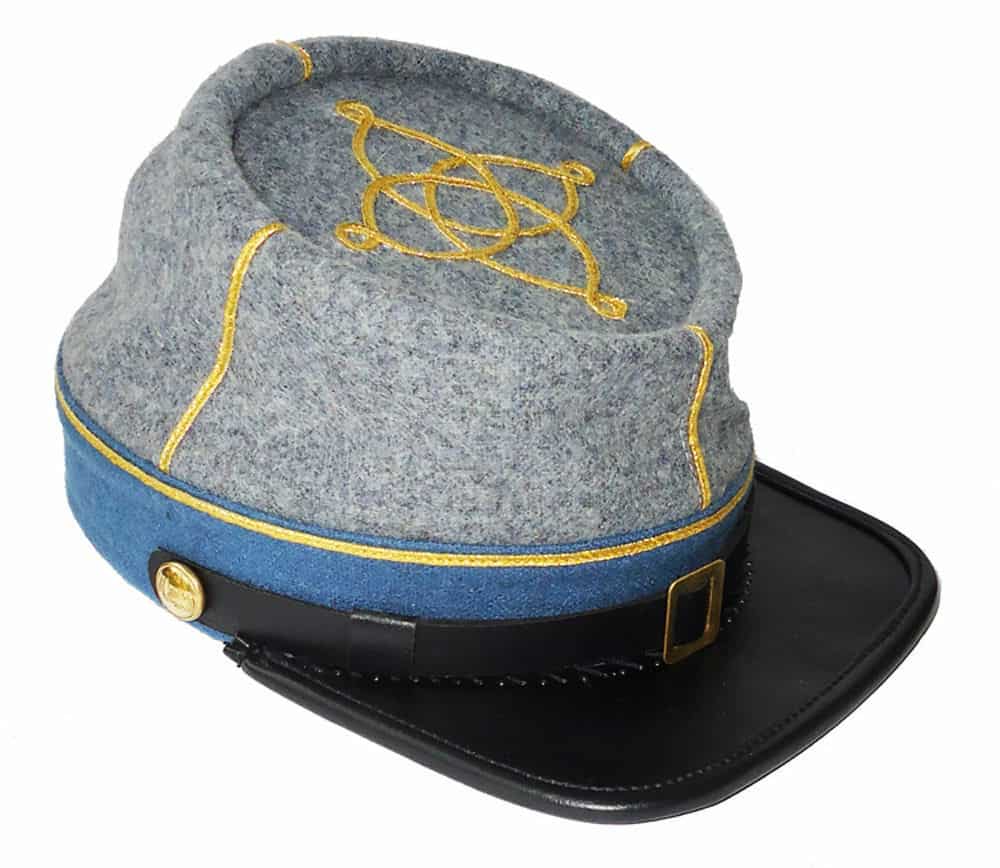 This kepi hat is probably a replica, but it is beautifully done and quite affordable. It is made of grey wool, and it has a leather brim. The topper of the cap is embroidered with a single row of the braid. Its price is $34.99 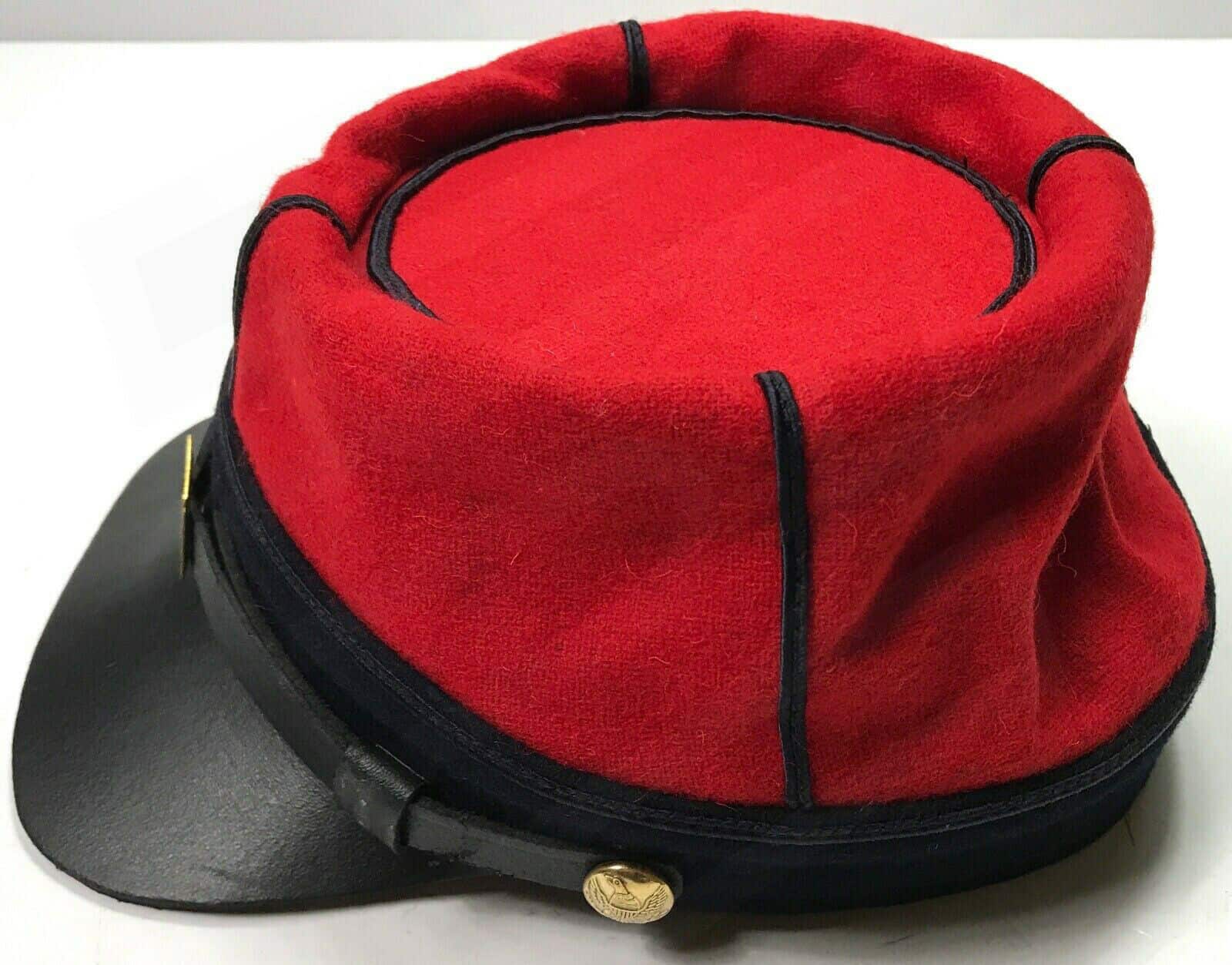 This beautiful maroon kepi replica is made of the highest-quality wool, and it costs $60.00. 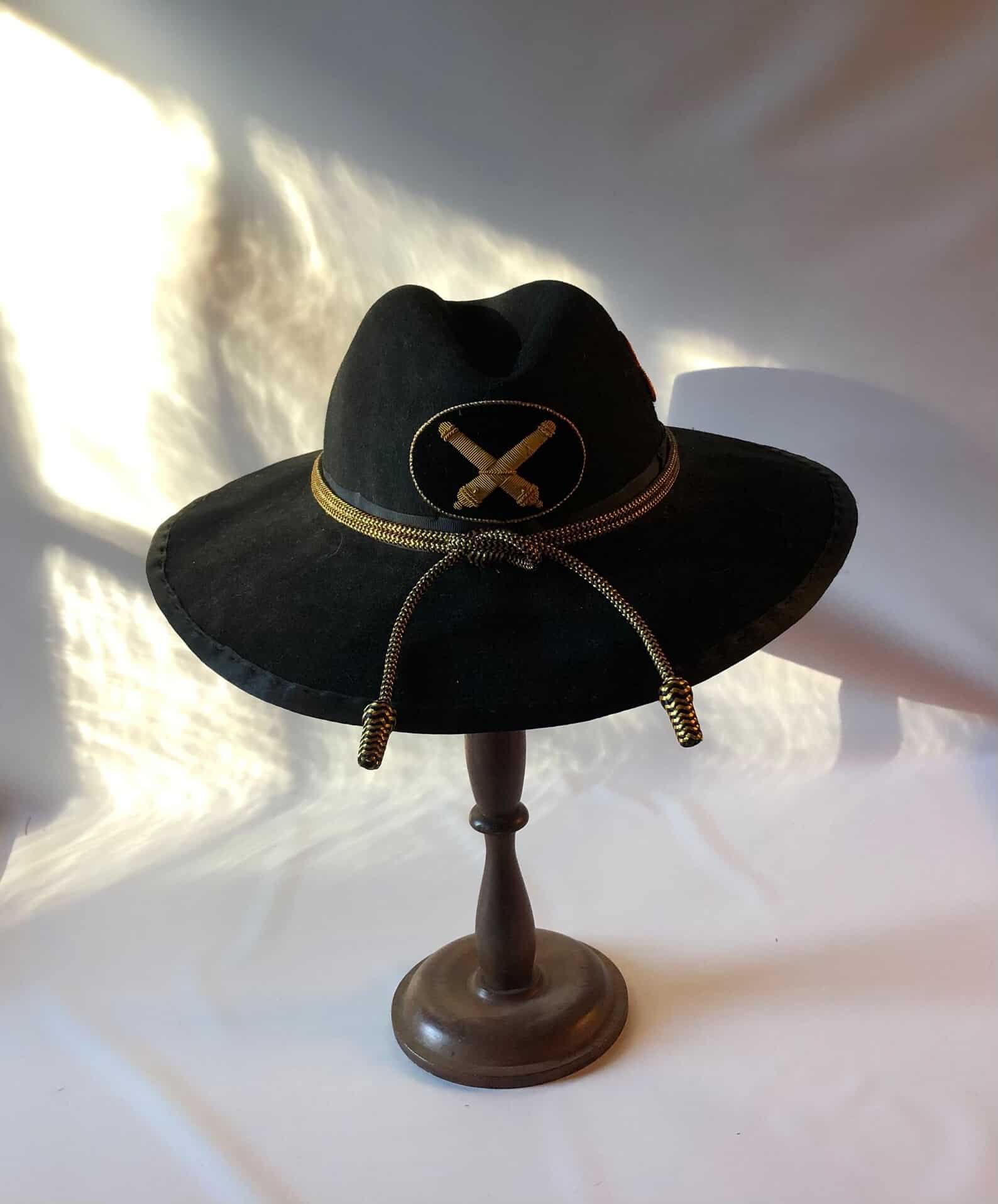 Another high-quality replica, this officer hat was based on an authentic cap. It is made of fur felt and it was lined with brown cotton, leather sweatband, and hat band. Its price is $249.00.

Where Can I Buy A Civil War Hat?

When looking for an authentic Civil War hat, you can always check the most popular online sellers on Etsy, eBay, and Amazon. There, you will be able to find various American Civil War kepis, forage caps, slouch caps, and many more for an affordable price.

However, you can also check out Tortuga Trading Post, a website dedicated to the trade of various antique items, including the Civil War hats.

One of such companies is Clearwater Hat Company, a family-owned Arkansas company that makes high-quality Civil War hat replicas. This company’s hats reached Hollywood – one of their hats was worn by Jude Law in the movie Cold Mountain.

Dirty Billy’s Hats is another company that makes beautiful reproductions of Civil War hats. It was founded by a man named Bill who first started as a Civil War collector, and then started making reproductions.

How To Make A Civil War Hat?

When you want a custom-made Civil War Hat, you can always contact one of the stores listed above, but you can also try and make Civil War Hat replica by yourself. Here are the steps to making a Civil War kepi:

Civil War is probably the most important part of US history, so it makes no wonder that so many antique collectors are interested in Civil War hats. These hats came in several styles, and many of them can be bought in online stores.

However, not every hat that looks like it is from the Civil War is authentic. Some of them are replicas, which isn’t necessarily bad. There are also interesting online tutorials that can teach you how to make a Civil War hat.

Do you own any memorabilia from the Civil War? Did you inherit it from your great-great-grandfathers, or did you buy it?