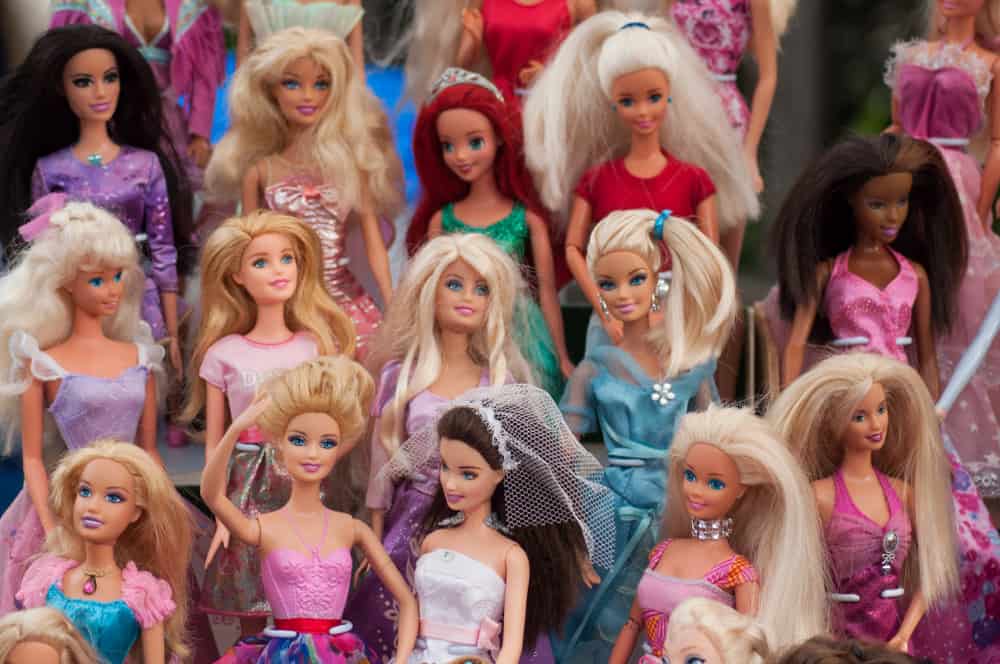 Barbie dolls are a cultural phenomenon. Even if you’ve never had one yourself, you must certainly have seen them around or heard of them at the very least.

Having said that, how much do you really know about Barbie dolls? Truly, with a rich history of over 60 years, there is much more to these dolls than you might first expect. For instance, did you know that one Barbie doll sold for over $300,000?

If you are interested in learning more about Barbie dolls, including their history, how to identify them and determine their value, as well as a brief analysis of the reason for their surprising value, we have written this article just for you!

History of the Barbie Doll

The first Barbie doll debuted in 1959, at the New York Toy Fair. These dolls were created by Ruth Handler, co-founder of Mattel, Inc., who named them after her daughter (Barbara) and modeled them after the German doll Bild Lilli, whose rights she bought.

Although some parents were concerned about Barbie’s mature appearance, Handler considered it important to give young girls a role model to look up to. Barbie was a well-rounded woman, who has had more than 200 careers over time.

In the first year alone, over 300,000 dolls were sold, mostly due to Mattel’s sponsorship with the Mickey Mouse Club TV program. In 1961, new models were released, including a red-haired Barbie and the iconic Ken (named after Handler’s son).

Ever since, Barbie’s popularity has skyrocketed thanks to Mattel’s brilliant branding and innovative ideas. Barbie’s story was expanded over time, celebrities had Barbies made in their likeness, and Barbie even had her own runway show.

More recently, a lot more diverse and inclusive models have been introduced, ranging from a drag queen Barbie, to a ‘chemo barbie’ (to help girls with cancer), Barbies with different ethnicities, as well as dolls that represent strong historical women.

Vintage Barbie Dolls that are Worth a Fortune

The Vintage Era for Barbie dolls is considered to be between 1959 (the year Barbie was released) and 1966 – the era of ponytail dolls, after which came the Mod Era, wherein Barbie began to change and evolve rapidly.

During the vintage era, 7 different versions of Barbie were made, typically referred to as #1 to #7. #1 and #2 are more or less the same, and they are usually considered the most valuable ones, given that they were the first models.

The #3 model was quite similar to the first two, but the doll now had blue eyes and blue eyeliner instead, as well as different earring options. This one is less valuable than the former, usually being priced anywhere from $1,000 to $3,000.

The #4 model is the first one that was made with vinyl, and she had a slight difference in her hairstyle, in the form of a hard curl at the end of her ponytail. This model is typically sold for $1,000 or less.

The #5 model had quite a few differences from the previous ones. She was available with three different hairstyles, including the new red color in addition to the previous brunette and blonde, and she had a hollow body. Its price is under $500.

The #6 and #7 models were virtually identical. They had a new lip color and various hair colors, as well as new outfits. The #7 model was eventually replaced by the Swirl Ponytail doll. These dolls tend to sell for a few hundred dollars.

As you can tell, most vintage Barbie dolls are still quite valuable today. However, some of the most expensive Barbies were actually released later on, when much more glamorous versions emerged, inspired by different people and aesthetics.

For example, the most valuable Barbie doll was designed by jewelry designer Stefano Canturi and sold at an auction for a staggering $302,500 in 2010. The proceeds from this auction were donated to the Breast Cancer Research Foundation.

Another extremely expensive modern Barbie would be the one designed by De Beers Jewellers, whose belt included 160 real diamonds. She sold for $85,000 in 1999, which would be equivalent to over $130,000 today.

How to Identify Your Barbie Doll?

Whether you suspect you might have one of the vintage dolls, or are simply wondering when and where your doll was made, you need to know which characteristics to pay attention to.

First, you should look for a marking on the right side hip. Ignore any other markings, as they were used for assembly, and are not going to give you any meaningful information.

The bottom of Barbie dolls’ feet can also be indicative of the time they were made. For example, the first (vintage) ponytail Barbies all had holes in the bottom of their feet.

Moreover, because Barbie dolls were originally made in Japan, the ones made between 1959 and 1972 have “(Made in) Japan” stamped on the bottom of their feet. Later models were created in different regions, such as Mexico, Hong Kong or Taiwan.

Another big difference between dolls made in different time periods can be noticed in their hands. Because the early vintage dolls used Barbie mold for hands, they all have divided fingers.

This changed after 1968, when the manufacturing process changed as well. The fingers of dolls made after 1968 are usually not completely divided. Look carefully at the fingers and materials to figure out what doll you have, as they can vary significantly.

Both hair color and style can provide a good indication of your Barbie doll’s model because most dolls come with specific hair options. Beware though that many collectors re-root their dolls’ hair according to their own preferences.

For example, as we mentioned before, only the #5, #6, and #7 ponytail dolls had red hair options. The earlier models, including the first original one, only had blonde and brunette hair options.

Additionally, certain hairstyles and hair colors were only introduced later on. For instance, the ash blonde and platinum hues were added to the hair color possibilities around 1964, along with a new swirl ponytail style.

This is one feature that might surprise you, as most people wouldn’t expect it to provide any kind of hints. And yet, the neck knob can actually be a rather helpful characteristic when you are trying to identify your doll.

As it happens, most of the later ponytail dolls have larger neck knobs, as well as fuller faces, compared to the earlier models. Hopefully, this information helps you confirm what you might have guessed already from the aforementioned features.

Whether you are interested in buying a doll, selling yours, or are simply interested in knowing the current value of your favorite childhood toys, we have described below how to determine the value of a Barbie doll.

As is the case with most antiques and vintage items, the condition of your doll is going to play a big role in determining its value. Simply put, the better its condition, the higher its value and the more collectors are willing to pay.

The most valuable dolls are going to be mint condition ones. This term is used to refer to dolls that are virtually identical today to the day they were released. Most likely, they were never taken out of the box and they still have all their original accessories.

Because most toys are taken out of the box to be played with immediately, and the boxes tend to be thrown out, a doll that still has its original box in perfect condition is going to be quite rare, and thus more valuable.

However, if you have a doll that you used to play with a lot as a child, it is unlikely to be in mint condition. Perhaps you lost the box and some accessories/parts, and the doll ended up cut, scratched, etc. Unfortunately, such a doll won’t be worth as much.

As you are well aware by now, rare models tend to be more valuable, so long as there is a demand for them. In the case of vintage ponytail dolls, the earliest original ones are the most valuable ones, while later ones are sold for less.

However, while Barbie collectors are always going to be interested in rare, old models, these are definitely not the only ones that can sell for a good price.

Many of the more recent collections can also include valuable limited edition dolls, so do not overlook them just because they aren’t vintage or old.

Clearly, while the vintage ponytail Barbie dolls are guaranteed to be quite valuable, some of the newer ones can also be worth a lot, if you manage to find the right buyer.

If you want to know exactly how much money your doll is worth right now, consider looking into recent eBay listings of similar dolls or getting an appraisal.

Why are Barbie Dolls so Expensive?

When Barbie dolls were originally made, they were $3 toys for kids to play with. No one could have expected their worth today. However, at the end of the day, everything is worth as much or as little as people are willing to spend for it.

In the case of Barbie dolls, it is mostly collectors driving up their value. Some people are so immersed in the Barbie lifestyle and brand that they are willing to spend incredible sums to obtain rare, original dolls, that few others are likely to have.

As for these Barbie-loving collectors, their appreciation for the Barbie universe could stem from a number of different factors. One could be simple nostalgia. Another would be the depth of the universe created around Barbie.

After all, how many other toys have so many movies, shows, and games built entirely around them? Truly, Barbie is not just a toy to many; Barbie dolls are a piece of history, representing norms, values, and ideals from different years.

This kind of branding is what resulted in people like Stanley Colorite being inspired to collect over 2,000 dolls, and Azusa Sakamoto incorporating the Barbie aesthetic completely into her lifestyle, from her house to even her food.

The two people mentioned above may be some of the more extreme examples, but there are plenty of other people who believe Barbie made their lives better; such feelings result in the appreciation that is needed to become a collector.

Instant hit whose popularity only rose over the years. Product of genius branding and business decisions along with great timing. Nostalgic toy for girls all over the world. Barbie dolls are all of that and more.

While we tried to explain everything we know about Barbie dolls in-depth, we might have missed some things. If you have any questions or remarks, feel free to comment below!