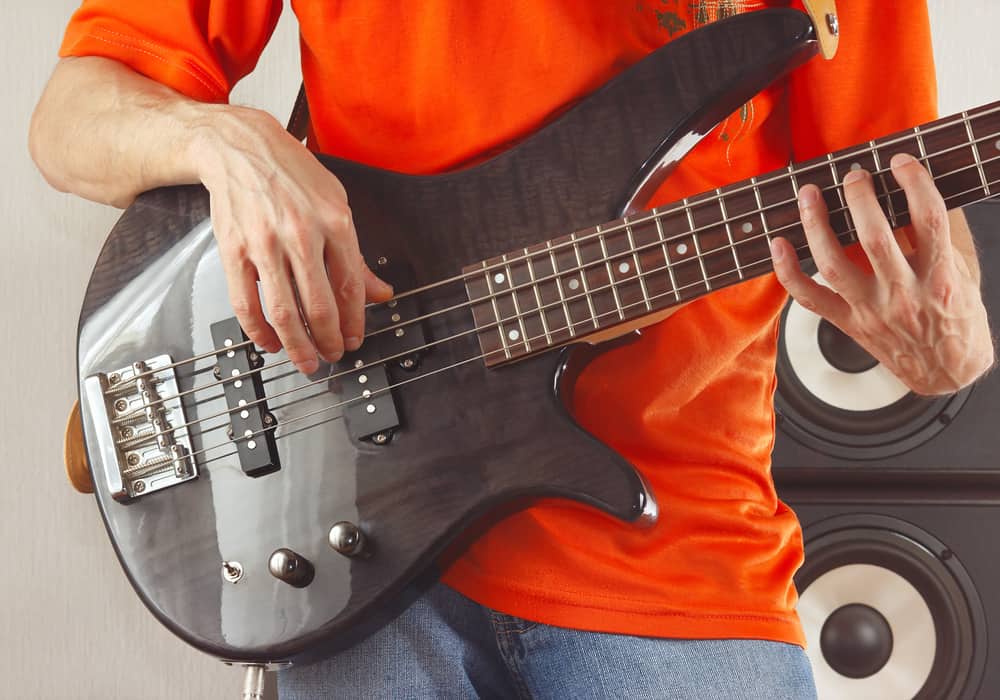 If you are an amateur musician or think of learning bass or guitar, you should know the differences between them. They are both string instruments, you can hear them in various music genres, and they can look pretty similar to a novice.

Still, bass guitar and guitar are not the same instruments. There are many distinctions between these two, from the number of strings to the tuning method. Musicians disagree about which of them is more comfortable to play, so let’s talk about the differences between bass vs. guitar before making up your mind.

If you visit a music store and take a look, the first thing you will notice is that bass is bulkier and heavier than a guitar. Both instruments come in various sizes, but the bass is always larger than any existing guitar model.

One of the vital differences between these two instruments is the number of strings. A typical bass has four strings, and the average guitar has six of them.

However, you can find a bass with five or six strings and a guitar with twelve. Nowadays, there are also basses with 24 strings and guitars with unbelievable 49 ones!

Generally, a bass has thicker and longer strings than a guitar. That means you need more force to pluck them, whether you use your finger or a pluck. Therefore, playing this instrument can be challenging for kids and lighter weight persons.

However, the most significant visual difference is the scale length. This value defines the distance between the bridge and the fretboard’s end, called a nut, multiplied by two.

Nowadays, you can find smaller basses than standard models, with a shorter scale length. On average, they have around 30 inches (76 cm) of the scale length, making them more suitable for players with smaller hands and bodies.

However, a short-scale bass guitar is still larger than an electric model. The interesting fact is that the first basses were the electric guitars with modifications on the scale length, strings, and tuner size.

A bass model that is most drastically different from the guitar is a fretless bass. As the name suggests, you need to play this instrument using only strings.

Although these instruments are rare and expensive, some famous musicians, such as Pino Palladino, Sting, and Rick Danko, prefer using them. The tunes produced by this type of bass contain many vibratos and sliding in and out notes repetitively.

Bass vs. Guitar – Tuning and Sound

That means the chords for a guitar and bass are the same, and a guitarist can easily switch to bass, and vice versa. Besides, the bass player uses different frets than a guitarist to play the same chord.

Still, the sounds these instruments produce are different. If you play the same tune on a bass, you will hear it is darker and in a lower register than when you use a traditional guitar. This sound distinction is the vital cause for variations in playing technique and a bassist and a guitarist role while playing in a band together.

It is hard to imagine a quality music band without a bassist next to a drummer, while a guitarist has more freedom, solo parts, and riffs. Some bands have two guitars, and in that case, one has a lead role and the other plays rhythm chords.

However, that doesn’t lower bass importance in the band. Contrary, the skilled bassist provides both rhythm and harmony in tune, and the bass lines give songs a specific beat.

Besides, many bassists can perform impressive solo parts and get as much attention as the lead guitarist. For instance, the famous Beatles bass player, Paul McCartney, switched from a guitar to bass when replacing the former bassist.

Both bass and a guitar are versatile instruments you can hear in various genres, such as jazz, blues, rock, and heavy metal. However, a guitar player gets more spotlight in rock and metal music while a bass player supports the guitar riffs. Bassists work more closely with drummers in jazz and blues, working together on harmonies and grooves.

The playing techniques differ, as well. Typical guitarist uses fingers or a pick when playing. On the other side, an average bassist has plenty more styles to choose from, including Flatpicking, palm-muting, tapping, and slap ’n’ pop.

Walking the bass means you are in a constant motion instead of sticking to one tone by using transition notes, whether you play a chord, scale, or chromatic passing tones.

If you learn to walk the bass, you will play a technique no guitarist use. Blues and jazz are the common genres for playing bass in this style, but many others also benefit from it.

It is a common opinion that you can learn to play bass quicker with less effort than a guitar. However, that is not necessarily true. If you want to become a professional musician, you will have years of practice and learning either instrument ahead of you.

The bass has fewer strings than the guitar, and you don’t need much time to learn chord shapes and posture fingers. Hence the misconception that the bass is quicker to learn.

On the other hand, the guitar is physically lighter than a bass. If you are a child or have a weaker body type, you will find a bass too heavy and impractical and also have difficulties using the frets. Plus, you will need less strength to strum the guitar than bass strings.

Nowadays, the guitar is more popular than the bass, especially among young people. You can play solo, practice at home using online lessons or with a tutor. Plus, it is easier to put your hands on a guitar material and popular songs tabs.

On the other hand, learning a bass will require you to be in a band and practice playing as a part of a team. Still, the good news is that you can have the best of both worlds, just like Jimmy Hendrix did. Once you learn a few basic chords, it gets easier to play either of these two instruments or both.

You can practice bass for a few months and then switch to guitar or the other way around. The instrument you choose should depend on your music taste, dedication, goals, and personality traits.

Bass vs. Guitar – Your Preferences

You have probably had an idea whether you prefer the sound of a guitar or a bass, but your personality also matters. As you have probably noted, the bass player is at the bottom of the stage in most cases. Its position is next to the drummer, while the guitarist gets all the attention, spotlight, and riffs.

The choice of the instrument depends on which of these two places you see yourself in. Guitarists are mostly dynamic personalities, naturally dominant, and they do well as a band front-man.

Besides, writing your own songs and a desire to perform them solo are potential signs that you should choose a guitar. Contrary, most bassists tend to be in shadow. These introverted personalities like avoiding extra attention and, in general, are more effective as a part of a whole than as a soloist.

If you are quite the type of person who plays out of a love of music more than out of a desire to be celebrated, you will probably more enjoy playing the bass. Of course, there are exceptions, like Sting. He is famous for his bass playing, but he is also a lead singer, actor, and songwriter.

On average, the bass price is about $50 higher than the guitar cost. The reason is the difference in the instrument size and amount of material used for its production.

Plus, a set of bass strings costs about $20, while you need to set aside about $5 for a pack of guitar strings. The practice has shown that bass strings last longer because they are thicker and more durable than guitar ones.

Prices of amp upgrades, pedals, and cases, vary slightly if any. However, the average guitarists replace more instruments during their careers than bassists, who usually play the same basses for years. One of the theories is that too many guitars are broken during performances when guitarists go wild.

Although guitar and bass may look similar to someone who is not into music, they are different instruments. The bass is bigger, heavier, and has a longer scale length than a guitar.

Plus, tuning, playing, and roles are different, as well. Both instruments carry challenges during learning but playing one will make it easier for you to play another.