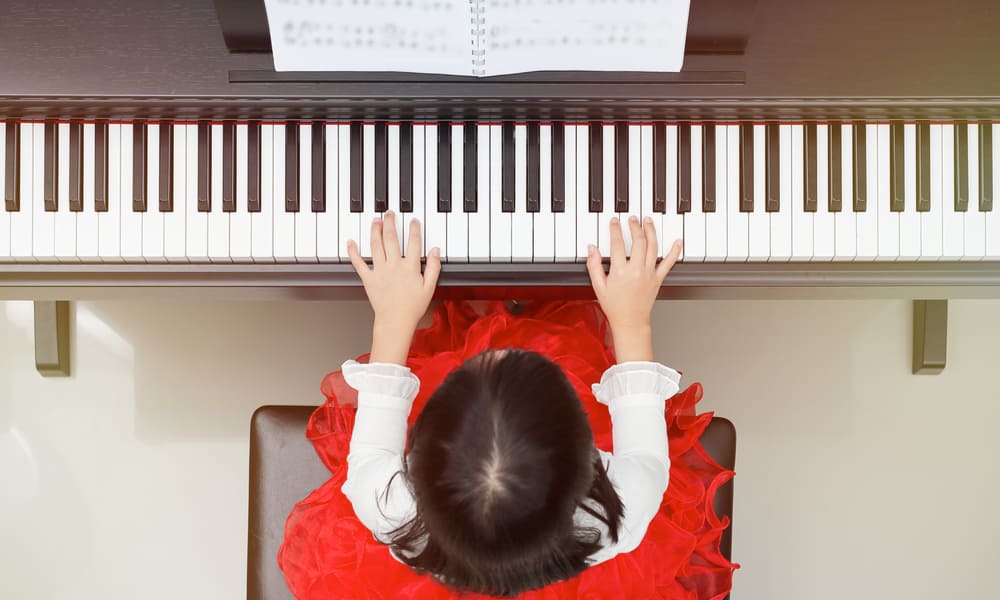 Some people believe the best way to learn piano is to start with the songs you like. These might be pop songs with recognizable piano riffs or a classical piece you heard in your favorite film. It helps if you can read music. So if you’re not familiar with staff notation, take a few tutorials.

But if you’re a novice, you probably don’t know the best beginner piano songs to practice with. You might look for pieces with a minimalist bass line of two or three chords. Or maybe you’ll be drawn to slow songs – the extended duration between notes makes seem easier to play.

But with slow tunes, you can easily lose the rhythm, and you can easily get frustrated. Or worse – bored. Especially if the song ends being more complex than you thought. But don’t give up yet! Simplify your piano journey with this list of appropriate practice songs for beginners.

You might know it as a nursery rhyme  – either in its English form (Twinkle Twinkle) or the Frech version (Ah! Vous dirai-je, Maman!). And you might notice it sounds eerily similar to the alphabet song. But did you know this basic melody was composed by Mozart?

He named it KV 265, but his version will just stress you out, so start with the right-hand version for now. As you improve, you can toss in a little left-hand play. This latter version only uses white keys. Your left-hand plays one key instead of a chord, so it’s a great left-hand intro piece.

While reading music is important, playing by ear is a vital skill too. And one of the easiest songs to attempt – which also comes in handy at random events – is Happy Birthday. After all, it’s always someone’s birth date. Start with the one-hand tutorial before advancing to two.

Most people just call it ‘chopsticks’. It’s a great song for your beginner’s repertoire because you’re using both hands but you’re not playing chords. Also, the harmonies sound harsh but familiar, so it’s an easy way to start training your ear. It only uses white keys and you can use it to improve your rhythm and speed. Try playing it faster and faster to warm up before lessons.

This song’s official title is Bagatelle No. 25 in A Minor and it’s important to have at least one minor key song in your repertoire. It sounds like a complicated song, especially because almost everyone recognizes it. That just makes it more impressive to your friends!

And it’s not that hard – it has a lot of repetition. In this version, your left-hand plays single notes, so it’s great for starting. Your right hand will get a workout, especially once you up your speed. This makes it a good song for improving dexterity, rhythm, and sequence.

This is probably the first piano piece you heard in class. Lots of tutors use it to lure you in because the dance-like bass line is fun to hum along to. It’s a good song for two hands, and your left-hand plays one note at a time, but you can add a little bounce and playfulness. Try it!

If you’re an adult learner, you may be familiar with the Beatles, and with this famous song by Mr. Yoko Ono. But even if you’re not, it’s a good piece for getting comfortable with chords. In this piece, your left-hand works harder than your right, and you need to focus keenly on timing.

Simultaneously the most recognizable and possibly the most annoying Christmas Carol, Jingle Bells is one for the books. Make a game of it by learning the words to all the verses and singing along as you play. If nothing else, you’ll get good at splitting attention – a key characteristic for seasoned musicians. You can even get cheeky and try the Bart Simpson remix.

Even if you’re not old enough to recognize the band, this piece is great for rehearsal. The intro … introduces you – pun intended – to left-hand melodics. It then eases into basic chords, letting your right hand take over the melody. And yes, you can learn the words and karaoke if you like.

This is arguably one of the most beautiful songs in existence. But it’s been covered by so many people that it now sounds cliché. Still, it’s a good piano piece to know, and if you have the right vocal flair, your version could be the next viral sensation. Even if it doesn’t, the soothing harmonies are a good way to calm you down after a long day (or a stressful practice session).

Are you familiar with this story? It’s a famous ballet about a cursed princess who is a swan by day and only turns human at night. The main theme of this ballet has a simple, familiar melody. In this simplified version, your left-hand plays single notes as your right-hand carries the song.

Controversy aside, this piece adds various skills to your piano playing treasure chest. It has a typically off-beat Latinx rhythm so you’ll practice tempo and pace while immersing yourself in a different musical genre than you’re used to. And it’s a pop song, so it’s sure to impress. The left-hand is simple and repetitive, leaving your free hand room to flex, in every sense of the word.

Johann Sebastian Bach’s Prelude No. 1 in C Major is a piece you should learn both for its familiarity and its ‘classical cred’ (though J.S. Bach was a Baroque Period composer). No. 1 sounds complex, but it’s mostly repetitive arpeggios, so your muscle memory will kick in. He wrote 48 preludes in total, so you can work through them gradually and assess your growth.

If you’re looking to learn something socially conscious and get right with the times, this light-hearted, country-sounding 2019 song started a viral Tik Tok dance-a-thon. It’s not a piano song but it’s a recent earworm that’s easily recognizable. So git up, start slow, and give it a shot.

Which version of this song comes to mind? (The version you recognize will tattle your age!) Whether you’re jamming to the Bill Withers, Michael Bolton, the cast of Glee, or the Canadian Tenors, this piece is a must-learn. The version repeats and mimics the melody on both hands before adding variations for the chorus and a lot more flavor during the bridge climax.

For a lot of non-professional pianists, pop songs are a kind of ‘party trick’ to wow their pals. So if you happen to be at a more high-end venue, you could always whip out the Chopin and show them you can be classy. This piece sounds odd to contemporary ears but it’s Chopin’s favorite.

And it’s easy to learn because the range of notes is lower and slower. It’s from the Romantic Period of music. During this era, the pacing was less important than emotional expression. So like many pieces, you have to be extra careful not to lose your rhythm, flow, or tempo as you play.

Unless you’re in a music school, you’re most likely to find new music in movies or films. This piece is on the score of a 1993 movie called The Piano. It sounds complex enough to wow any audience but easy enough for beginners thanks to the repeated 6-note riff in both hands. All the notes in the song are on white keys, so start in slow sub-sections then put it all together.

Here’s another piece that instantly marks you as a top pianist among your non-musical friends. It’s a fun piece full of flavor and flair, but you can start playing it early in your piano career. Play slowly at first then progressively increase your pace as an … entertaining … way to measure progress. It was initially sold as sheet music, so it’s good sight-reading practice too.

Some may say this piece is too complex for beginners. But if you watch the slow version of the tutorial, you’ll see it’s quite do-able. Think of it as an aspirational piece – another marker of your playing progress. As you get better and better, you’ll find yourself playing at increasingly high tempos and with fewer mistakes. This gradual increase in skill level will keep you motivated.

You may know this song from in its original Paul McCartney version back in 1965. Or Frank Sinatra’s cover in ’69. Maybe you’re more familiar with the 1994 acapella by Boyz II Men. Either way, the plaintive melody, and note-based harmony are good for two-handed playing practice.

You can’t hear the beginning of this song and not want to learn it. It’s so light and soulful! Don’t be intimidated – it’s a similar sequence and pattern of notes that shift up and down the keyboard, so muscle memory will help a lot hear. That and hearing people get excited as they recognize the riff you’re rehearsing. Keep at it, it’s worth it. As always start slow.

This song appears in the soundtrack of Twilight, which is enough to motivate many learners. But in case you need an extra kick to stay with it, do it for the kittens. This song sounds both simple and artistic. The ornamental bit at the end is great practice for musical embellishment.

Kids born in the mid-60s and early 90s knew memorized this theme sing right down to the finger snap. So with the 2019 remake, it could be an interesting piece to … add … to your portfolio. Plus it will teach you how to deal with rests and pauses in piano pieces …

First sung by Elvis Presley, this song has been covered endless times by artists as diverse as UB-40 and Twenty-One Pilots. It has a sweet, poignant melody. Every tutorial has a different version, from chords to two-note harmonies. This simplified one is ideal for first-time pianists.

28. What a Wonderful World – Louis Armstrong

However young you are, you can probably recognize the gruff voice that sings this phrase in random places. Even without context, or without knowing his name. So it’s a good song to learn since it cuts across audiences, from that foreign exchange student to your grandparents.

Think of a stereotypical old-school piano scene. The type with lightning flashing and ominous organ music. This piece is probably what’s playing in your mind, so why not learn to play it with your fingers? The song is in D Minor and if you’re playing on a digital keyboard, you can even switch to the organ voice/timbre to make your playing feel more authentic and pleasurable.

Let’s jump back into the recent past with this pop piece from 2019. It will feel familiar to young learners with a certain taste in music. And if you need further motivation, check out the quirky official video then come back and learn the simplified piano arrangement. Have fun with it!

When this song came out, it was lauded as the most romantic ballad ever written … until its composer went one better and topped it with Perfect. But it got played at so many weddings that it became cliché. Still, it’s a good piece to learn just in case – you never know. And if you have a friend that plays guitar, you can even make it a duet, since Ed generally performs it on strings.