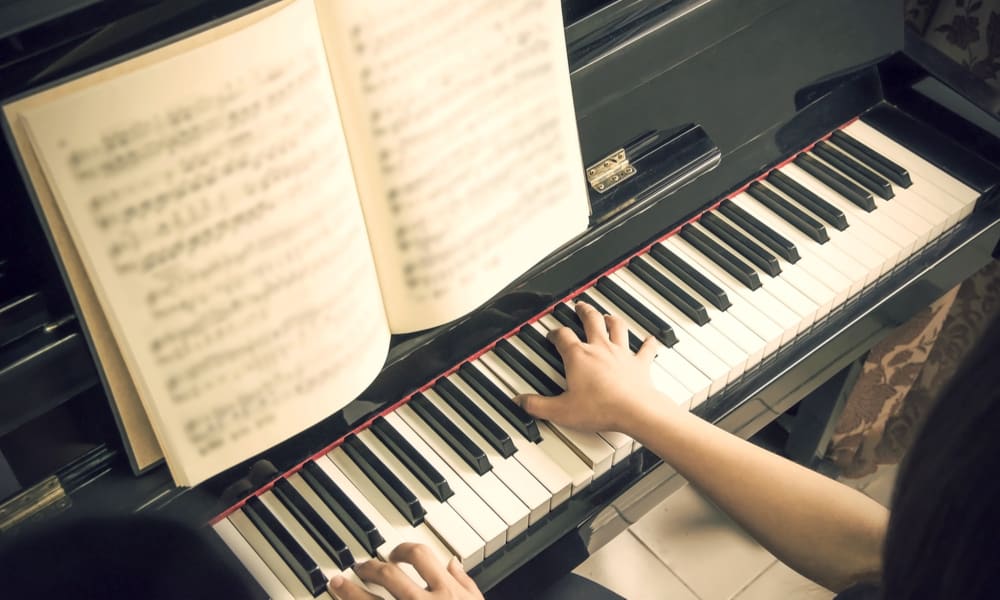 Whether you’re from a musical family or you just enjoy dancing to pop songs, the piano is one of the most popular instruments to learn. It teaches you to multitask, concentrate, and enhance your memory. It can also be good for your physical and mental health. It reminds you to be intentional and present, which are both self-care tools to maximize contemporary living.

But getting the right training system is helpful. If you enjoy your piano lessons, you’re more likely to stick with it. That’s why many teachers advise you to find songs you like and learn how to play them. Of course, if your preferred song genre is complex, this may be one more reason to give up. Let’s start with a list of the best piano songs to keep you interested in piano class.

Nursery rhymes and children’s songs are a good place to start, even for adult learners. This is because the tunes are simple and familiar, so you’ll learn them quickly and the satisfaction will motivate you to keep playing.  This song has the same tune as The Alphabet Song. The version in this tutorial is played in C major using all white keys. It’s a one-hand tutorial.

This French children’s song is an ode to the moon. Don’t mix it up with Clair de Lune, a far more complex piece by Claude Debussy – you can leave that for later in your piano journey. For now, try this simple piece in F Major. It uses all white keys except for B♭. It’s a good introduction to two-handed playing, and the tutorial teaches each hand in turn before combining them.

When you want a quick piece to get your confidence up, this one hits the spot. This tutorial plays it one-handed in F Major so the only black key you’ll use is B♭. Start with right-hand practice then you can add some bass chords for your left hand once you’re ready to add a little flair.

You’ve probably heard this piece somewhere. Its melody is simple and the harmony adds depth and richness. It’s easy to sing along since the lyrics are easy and this version uses all white keys. Be patient though – it feels tricky. You could try learning it via an app like Skoove if the video tutorials are too tough. Or you can play the song on a light-up piano like The One Smart Piano.

Hallelujah is one of the most commonly covered songs and it’s a soothing, soulful piece. It sounds simple and you can play it using mostly white keys. The version in this tutorial only uses one black key (F#). The left-hand toggles between a handful of chords that are easy to memorize.

Depending on your age and musical tastes, you might impress your friends with the piano riff from Still Dre. It has a solid hip-hop feel and the harsh discord in the harmony gives the song an edge. Playing the song is easier than it sounds, and you get extra points for rapping along…

When it came out in 2015, Hello was one of the most popular songs in the world. It only uses four chords in harmony so it’s fairly easy to learn. The right-hand melody is fairly straightforward as well. This version does use a lot of black notes though, so heads up.

Pop songs may impress your peers, but you need a few ‘classical’ songs in your repertoire as well. The official name of this piece is Bagatelle No. 25 in A minor. The notes are simple, but because it’s in a minor key and is full of ornaments and trills, it sounds far more advanced.

Many people describe this song as a classic. (Meaning a popular, timeless song, as opposed to an instrumental or orchestral piece from the classical error of Mozart and Beethoven.) It’s not a simple piece, but you’ve probably heard it so often that it feels easy and familiar. So whether you heard the cover version on Glee or sang it at a karaoke bar, take the time to learn it.

Even if you’re not into emo bands, you’re likely to recognize the piano riff in Clocks. It sounds easy but fancy, and it only uses three chords. The piece is in E♭ so lots of black keys. It also gives you practice in speed, pacing, and dexterity because you have to play it fairly fast.

This is one of the world’s most common Christmas carols. And luckily, remembering the piano progression is easier than mastering the lyrics! This version only teaches the right-hand section and it uses all white keys. And you’ll probably master the song before your roommates object…

You might feel piano practice songs are all ancient, so try this one from 2017. It’s a popular piece with a nice dance beat. In terms of skills, it will help you polish dexterity and rhythm. It’s a two-handed song and your fingers will move around a lot, on both white and black keys.

We refer to almost all ‘orchestral’ music as ‘classical’ music. But music students will tell you here are at least seven musical periods. The Canon in D is a popular piece from the Baroque period. It’s often played as a wedding march and is good practice for arpeggios and chords. It’s good practice for timing, sequence, and dexterity because the split chords stretch your fingers.

Bach was a baroque-era composer who wrote 48 preludes. This piece uses both hands, but each note is played alone. There are no simultaneous chords and you’ll only ever play one note at a time. This gives you excellent practice in sequence, rhythm, and pace as well as finger stretching. And because it has a lot of repetition, it helps you develop your muscle memory as well.

You’ve probably heard this piece in a movie. It’s a sad, slow, mournful piece. And because it’s so common, it’s seen as one of those ‘trademark’ pieces of ‘proper piano’ so it’s a good piece for your repertoire. It’s soulful, so it will train you on how to play expressively. It sounds simple and looks complex, but the pace makes it a good introduction piece for two-handed playing.

Some song lists go from simple to complex, but we’ve mixed genres and difficulty levels. We want you to try a bit of everything. This piece is hard … but it’s also fun. Because you’re sure to have heard it, it’ll be a massive ego boost when you master it. But be patient! It’s a super-fast piece but it will make you a star among your friends, and it’s so fun to play!

Many piano songs have chords on the left hand and melodies on the right. This song reverses that sequence. Your left hand mostly plays one note at a time while the right-hand plays chords. This helps build up the strength and dexterity of your left hand. And you can sing along too. The colorful ad-lib at the beginning is fun, and you can mix ‘voices’ on a digital piano.

Pieces you can sing along to are among the best piano songs. You can whip them out at a moment’s notice and start impromptu jam sessions with friends or strangers, so they’re good ice breakers. This basic version plays the ‘voice’ part on the right hand, so start here. Later, you can learn a more complex version that mixes melodic riffs and chords on both hands.

John Legend and Chrissy Teigen are among the most popular couples in Hollywood. And this song made waves both for its distinctive piano intro and the romantic scenes in the video. Both hands mostly play chords, so singing along can help you practice pace and timing. But the bridge has some complex melodic bits to train you in expressive play, especially the pre-chorus.

Before we veer back towards ‘classical’ pieces, let’s look at a hybrid. This song is from the soundtrack of The Piano. It has a simple, soulful feeling and it’s one of those pieces that – when played well – makes you look like an instant pro. Give yourself time though, it’ll take a while.

This song was a breakout hit for Alicia back in 2001. And it’s one of the first pieces that come to mind when people mention pop piano, so you should definitely learn it. As a bonus, it’s great for karaoke or jam sessions, and it trains you to play with feeling rather than just playing in tune.

When you think of the best piano songs, a certain aesthetic comes to mind. This song fits that stereotype. It’s soft, sweet, romantic, and a little sad. It’s also on the Twilight soundtrack. This song is good practice for bringing out the mood in music since it’s intrinsically emotive.

This piece is sometimes called Solfeggio in C minor. It’s An advanced piece, usually attempted by Grade 6 players or higher. It has a ‘flight of the bumblebee’ pace and feel.  But even though it seems complex, there’s a lot of repetition. It’s a good way to work off frustration. Think of it as the piano version of blasting your electric bass guitar on loud and is sure to impress.

When a piece is described as the composer’s favorite, you can’t be sure if it’ll be super easy or super hard. This piece is sad, and most people only learn the first minute or two, which have fairly simple notes. Use it to practice expressiveness, a key feature of the romantic era in music and art. Most of Chopin’s pieces were for solo piano, so you can look up more of his work.

Lots of people assume this is a R.E.M. song but you’re probably thinking of the Gary Jules cover from the Donnie Darko soundtrack. This tutorial only covers the intro, which is the section most of us are familiar with. Learn both hands, then if you’re into it, you can learn the rest.

Even if you don’t know what it’s called, you’ve probably heard this song. It’s from the soundtrack of a movie that shares the song’s name. It’s also been used in adds and web series, often accompanying a victorious slow-motion scene. It teaches you how to play expressively. This tutorial splits the song into three parts so you can learn them one at a time.

For many kids born before the 90s, you first discovered orchestral music through cartoons. And while this piano piece from the romantic period may have piqued your piano interest, it’s a tough one to learn so leave it for later in your playing career. You’ll get immense satisfaction from mastering it. Especially as you learn to play it at increasingly faster tempos.

Here’s another piece that often comes to mind when you think of pop piano. It helps that most of the music video is just Vanessa on the piano. This is a fast-paced piece you can sing along to, so try out the simpler pieces before you try it. Keeps its quicker intro passage for finger exercises.

This song caused quite a stir in 2019. It combines trap beats with country tangs and has become quite the cultural phenomenon. It’s not originally a piano song, so the keyboard version is fairly simplified. It’s easily recognized so it’s sure to invite cheers when you play it in a crowd.

We’re closing the list with an easily recognizable piece. It’s a sad, mournful piece that has been used in lots of movies and ads. Your left-hand doesn’t play standard chords – rather it moves across the keyboard, playing one bass note followed by a chord that’s about one octave higher. So it’s a good hand exercise. If you play it off sheet music, it helps you practice sight-reading too.