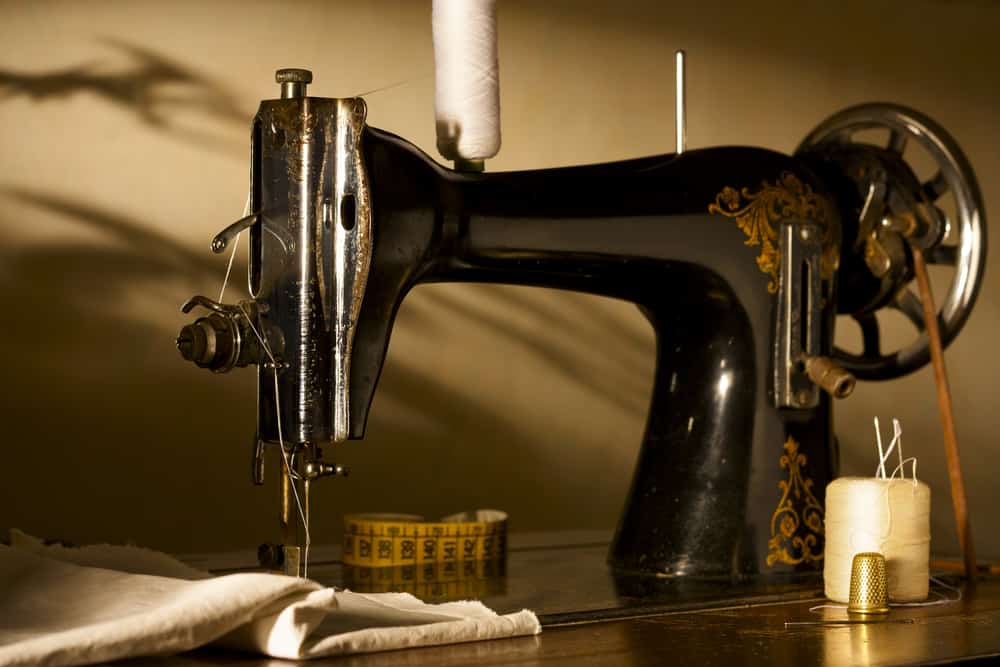 Have you recently discovered a passion for sewing and want to discover what it would be like to sew with an antique sewing machine? Have you always wanted to buy a vintage sewing machine but weren’t sure what to look for?

This article will help educate you about the history of sewing machines, tell you which brands are popular and trustworthy, give you recommendations on sewing machines to buy, and finally provide handy tips for when you’re shopping for a vintage sewing machine.

I was excited to delve into this topic as I was given a vintage sewing machine that belonged to my grandmother, and it was insightful to learn how it worked and what it was capable of producing.

Sewing has been a method of crafting garments and furnishings for over 20000 years. According to Thought Co, cavemen used animal bone or horns and sinew as needles and thread.

Needles made specifically for sewing machines were patented by German inventor Charles Weisenthal in 1755 – before the sewing machine was officially invented during the Victorian era.

There was a patent issued to Thomas Saint in 1790 for an invention of a sewing machine, but the design was found to be faulty upon testing.

The first functioning sewing machine was invented in 1830 by French tailor Barthelemy Thimmonier. His machine had a single thread, a hooked needle, and produced the same chain stitch that was used in embroidery.

His success wasn’t lasting because other tailors feared unemployment, so they burnt down Thimmonier’s factory in anger, nearly killing him.

1834 saw the invention of a sewing machine by Walter Hunt in America that could only sew straight seams. It wasn’t patented, as he was worried about causing unemployment.

In 1846, Elias Howe was granted an American patent for a hand-cranked machine that used two different threads at once. His machine used a needle with an eye at the tip that moved from side to side, and this created the lockstitch.

This is where a needle goes through a piece of cloth to create a loop on the other side. Then, a shuttle on a track guides a second thread through the loop.

The 1850s saw the invention of the first mass-produced sewing machine by Isaac Singer. They are famous for being the first sewing machine that had a needle move up and down, and a presser foot that powered the treadle machine.

Singer faced a lawsuit due to the machine using the same design as Howe’s patented machine. Howe won the suit in 1854 and was paid patent royalties as a result.

In 1857, James Gibbs was granted a patent for the first straight stitch sewing machine that used a single thread.

In 1873, a woman named Helen Augusta Blanchard patented a sewing machine that produced a zig-zag stitch.

In 1889, mechanical sewing machines were sold to the domestic market for the first time.

Finally, 1905 saw the electric-powered sewing machine being widely available for commercial and consumer use.

Well-known brands of sewing machines tend to be those who have been in business for a long time, who produce quality machines that don’t easily malfunction and have stood the test of time. Silver Bobbin lists some of the most popular brands around today:

Singer sewing machines are probably the most well-known brand as they are a household name worldwide. It is still an American-based company, but they have now outsourced its factories to other countries.

The company continues to produce sewing machines suitable for beginner to intermediate sewers to this day, and their older vintage models can sell for a high price.

Brother Industries are a Japanese sewing machine brand that have been in business since 1908. They began as a manufacturer of industrial sewing machines, but moved into the domestic market shortly after World War I.

One of the owners of the company is credited for inventing the shuttle hook design during the 1930s that is used in most sewing machines produced today. They are a reliable brand with a huge customer base spanning over 40 countries.

Bernina are a Swiss company who manufacture sewing machines. The company was established in 1893 when the founder invented the hemstitch sewing machine. Bernina began as a family company and is still a private company today.

Unlike the other brands, Bernina has kept up with the advances of modern technology. Some of their latest models incorporate technology such as digital control pads that can be accessed via a smartphone or tablet.

Their older models are said to be reliable, with some in the sewing community believing it to be the best in the world.

Pfaff is a German company that was founded in 1862 and has a strong reputation for producing high-quality sewing machines with strong durability. Older machines can sew through thick material such as canvas, leather, or denim.

Though it isn’t as well known as the other three brands, their longevity, their invention of a process that ensures fabric is fed smoothly and evenly into the machine called Integrated Dual Transportation, and their precise nature make them one of the best in history.

Love to Know Antiques, Silver Bobbin, and Mermaids Den have compiled lists of the best vintage machines based upon their durability, how easy they are to operate, their price, and other important factors. Below are my top 7 picks from these lists:

When you are buying a vintage sewing machine either online or from an in-person dealer, there are a few key things to look out for:

In summary, the best vintage sewing machines you should buy are produced by well-known and trustworthy brands. The three main brands are:

Any machine produced by these three in particular is always going to be a reliable sewing companion that can meet your crafting needs. Replacement parts should be easy to find, and they have an inexpensive to moderate price tag depending on the model you get.

We hope you have enjoyed this article and now know what to look for when purchasing a vintage sewing machine. Please leave any questions or comments below and we will get back to you as soon as possible.